In 1766, Jeanne Baret secretly joined the first French naval voyage around the world by pretending to be a cabin boy. 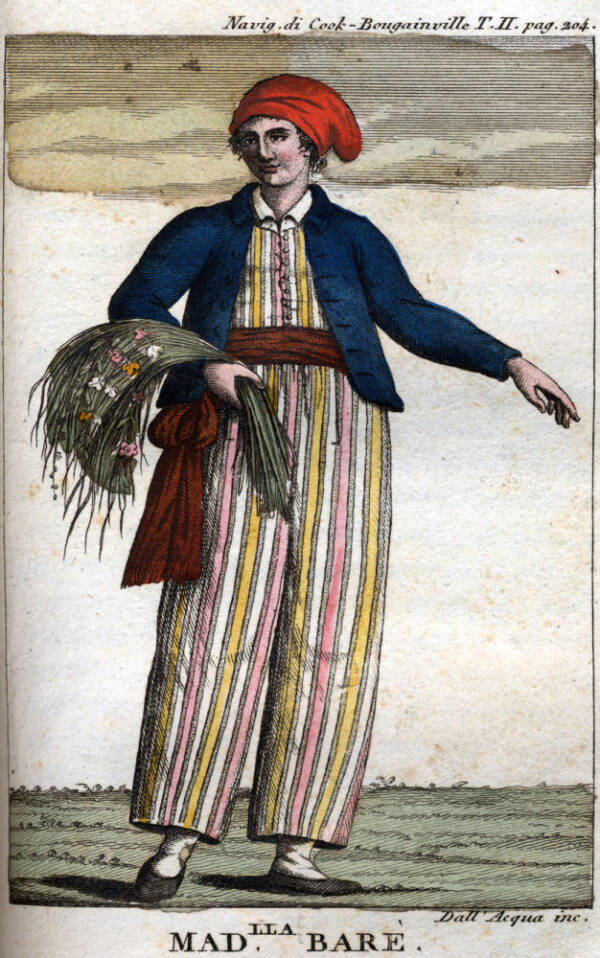 Jeanne Baret was pioneering botanist born in an age of exploration that was reserved almost exclusively for men. But in spite of this, she participated in the first scientific voyage conducted by the French navy and in doing so became the first woman to ever circumnavigate the globe in 1774.

But, the French navy didn’t allow women on its ships. So when her lover and former employer, Dr. Philibert Commerson, was hired as chief naturalist for a voyage around the world, they concocted a plan. Jeanne Baret would become Commerson’s cabin mate and assistant. They would call her “Jean,” after her father.

By the time the masquerade was discovered, Jeanne Baret had already catalogued more than 6,000 specimens of plants, shells, and even rocks novel to French scientists. Read her remarkable story.

Born on July 27, 1740, in La Comelle, France, Jeanne Baret was raised by a poor field worker. Though impoverished, her rural surroundings and father’s job spurred an early passion for plants that saw her become known as an “herb woman” as a young adult. 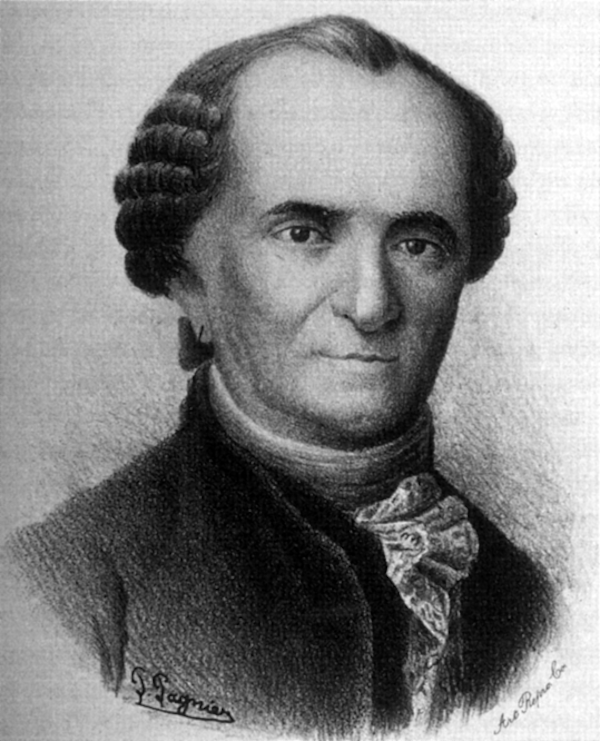 Her curiosity led Baret to be employed by Philibert Commerson. Though hired as a housekeeper, she was now surrounded by the work of a famous naturalist. His botanical studies had not only drawn him to Baret’s town to collect specimens but saw the two grow romantically involved after Commerson’s wife died in 1762.

After birthing her first child two years later, the unwed couple moved to Paris and gave their baby up for adoption. Baret had graduated from housekeeper to nurse. And, by some accounts, she also became a teacher of botany to Commerson, imparting her natural knowledge to the book-smart doctor.

In Paris, Commerson rubbed shoulders with the city’s elite. As a result of his connections and reputation, when Admiral Louis-Antoine de Bougainville received a warrant to claim new territories for France in 1766, he hired Commerson as his chief naturalist for the expedition.

Commerson, in turn, would have no other assistant but Baret.

Jeanne Baret Sails Around The World

Despite insisting that he needed his female assistant onboard for the expedition, the French navy was adamant — they could not have a woman in the crew. So the lovers tried another way. 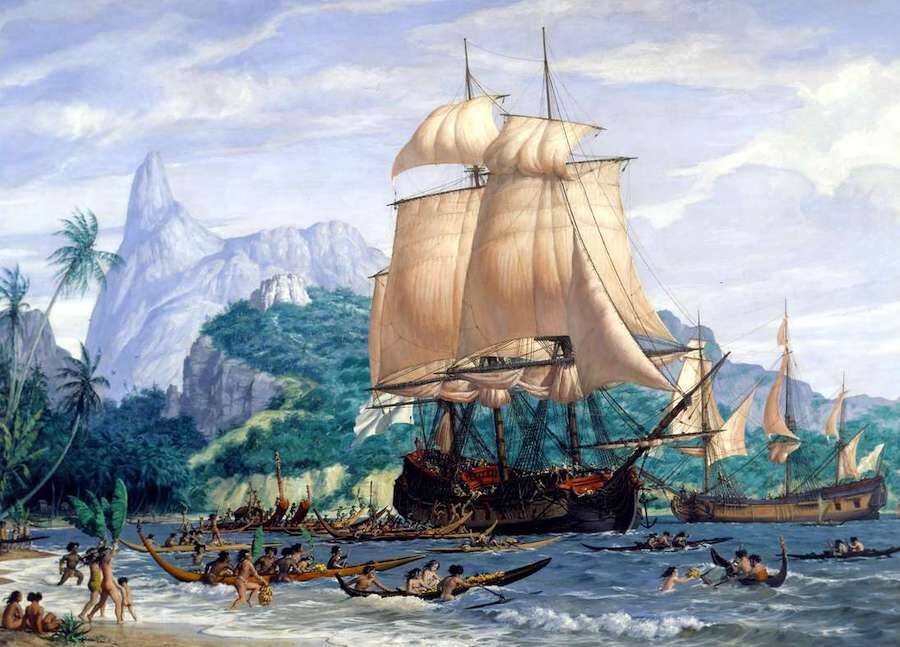 They would wrap her chest to disguise her figure and dress her in loose-fitting sailor’s clothes. Then, at a time when Commerson would be present aboard his ship, she would approach the gangplank and ask to join the crew. Commerson would hire her on the spot.

Miraculously, it worked. They were even given the captain’s quarters owing to all their scientific equipment and the importance of their work — it was the first expedition by any European nation to have a naturalist aboard.

After departing from Nantes in 1766, the expedition first made landfall in South America. But Commerson was ill, and Baret was the one to leave the ship and collect samples. On one of her expeditions inland, Baret discovered a curious new flowering vine that she named Bougainvillea brasiliensis in honor of their admiral.

Sharing Commerson’s cabin made it easier for Jeanne Baret to hide her identity, and the ruse lasted for at least a year. However, by the time the ship reached the South Pacific, the crew had grown suspicious “Jean,” who they never saw urinate or undress in front of them.

Wikimedia CommonsThe route of Bougainville’s circumnavigation from 1766-1769. Baret spent seven years in Mauritius before completing her circle in 1774.

Few sources detail exactly how Baret was exposed. One story goes that a Tahitian came aboard the ship and immediately referred to her with a word meaning “cross-dresser,” the practice of which was common in Tahiti. The crew mistook the word for “girl,” and the jig was up.

Another story suggests that crew members cornered her in New Guinea and raped her. The evidence for this lies in the fact that she was put in isolation for nine months and gave birth once the ship reached the French colony of Mauritius in the Indian Ocean. And there, 22 months after their journey began, Baret and Commerson were asked to depart.

The Legacy Of The First Woman To Circumnavigate The Globe

Baret spent the next seven years in Mauritius. She gave her second child up for adoption and watch Commerson die in 1773. She later married a French sailor and eventually returned to France with him in 1774, thereby completing her circumnavigation of the globe. 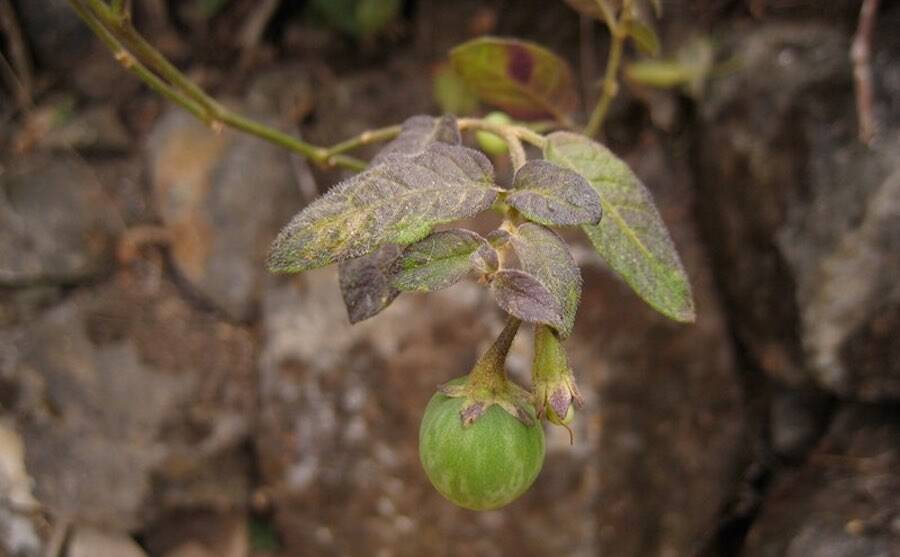 University of British ColumbiaSolanum baretiae, a species of nightshade named after Jeanne Baret in 2012.

On her return, she received a generous sum from Commerson’s family as payment for her work. But more surprisingly, in 1785, she received a pension from the French Navy at the personal request of Bougainville, who deemed her an “extraordinary woman.” She received 200 livres per year until she died on August 5, 1807.

Only in the last decade has Jeanne Baret begun to receive the recognition she deserves. A biography, The Discovery of Jeanne Baret, was published in 2010, and, in 2012, a new species of South American nightshade was named Solanum baretiae in her honor.

After learning about Jeanne Baret, read about Susanna Salter and America’s first female mayor. Then, learn about Kathryn Sullivan — America’s first woman to walk in space.