Experts believe that the wolf was shot in the park, which is illegal. 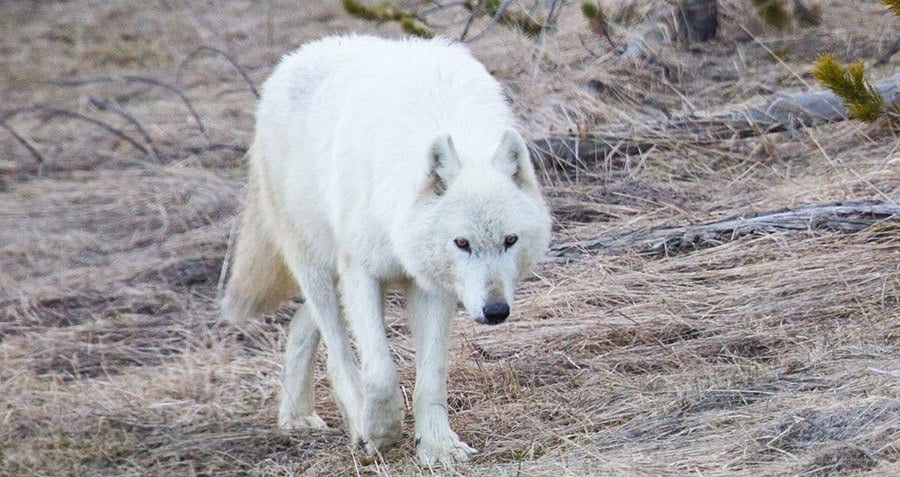 An iconic denizen of Yellowstone National Park died last month — and now experts believe that it was the result of an illegal shooting.

In April, park officials euthanized a rare white wolf that resided in the park. The wolf, a 12-year-old alpha female of the Canyon Pack, was found by a group of hikers in the north side of the park — near Gardiner, Montana — dying from a gunshot wound.

According to park officials with whom The New York Times spoke, the wolf was the only white wolf living in the park, and had birthed 20 pups during her longer-than-average life.

Upon euthanizing the animal, officials at the U.S. Fish and Wildlife Services (FWS) forensics lab examined the carcass to determine the cause of death. And on Friday, they released the results: The wolf had been shot in the park with a rifle.

Now, as shooting an animal is illegal in the park, park officials have opted to treat the wolf’s death as a crime — and to find the perpetrator.

“Due to the serious nature of this incident, a reward of up to $5,000 is offered for information leading to the arrest and conviction of the individual(s) responsible for this criminal act,” Dan Wenk, Yellowstone National Park superintendent, said in a statement.

Since then, other actors have offered rewards for the identification of the wold’s shooter as well, with the Montana group of Wolves of the Rockies offering up another $5,000 reward on Friday.

According to Marc Cooke, the group’s president, it is likely that opponents of the wolves’ reintroduction into the park are behind the incident.

“People take matters into their own hands and feel they are above the law and they kind of flaunt that fact that they can do what they want to do and there’s no repercussions,” Cooke told the Associated Press.

Previously, the wolves had been a common sight in the region, but due to habitat loss and extermination programs, their numbers had dropped significantly throughout the course of the 20th century, to the point that in 1973 the U.S. Fish and Wildlife Service listed the northern Rocky Mountain wolf (Canis lupus) as an endangered species.

Ranchers and hunters in the region have cited the wolves’ tendency to prey on big-game animals and cattle in demonstrating their opposition to the wolves’ reintroduction.

“We have worked very hard to protect what we have, and it’s not very successful,” sheep rancher Cindy Siddoway of Terreton, Idaho, told CNN. “It is devastating for us to put all of the money and the time and the genetics and work to produce a great product and then just have it half-eaten and left to die.”

Others, however, consider the wolves to be a net boon to the park and its biodiversity.

“Grizzly bears, black bears, coyotes, wolverines even, foxes, even birds will scavenge off carcasses…eagles, ravens all those meat eaters benefit by the protein that the wolves leave on the landscape that would otherwise be bound up into live animal,” Utah State University wildlife ecologist Dan MacNulty told PBS.

Either way, park officials have cited concerns about protecting park wolf populations during hunting season in the greater Yellowstone area, which begins this fall.

Next, read on about the little-known U.S. government agency that kills millions of wild animals each year.