Einstein had just finished honoring his friends Lucille Ball and Desi Arnaz in front of a live audience when he collapsed of a massive heart attack onstage. 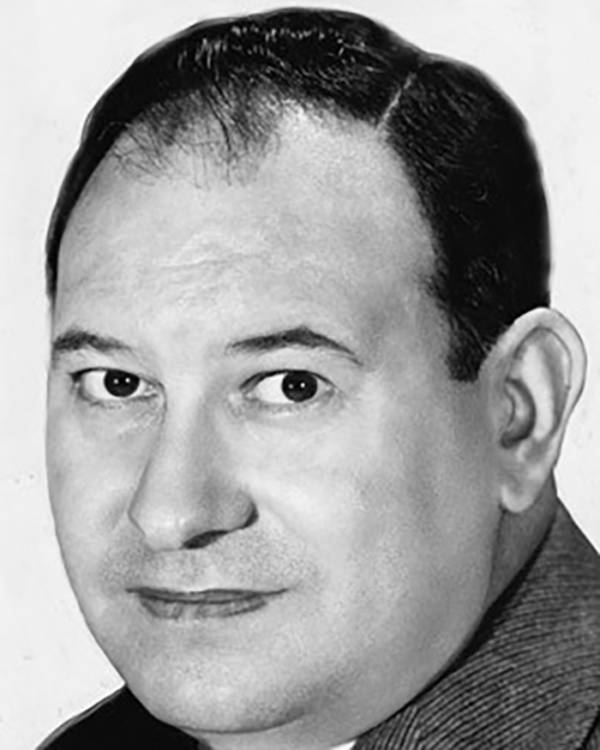 It was a joyous night on Nov. 23, 1958. The Friars Club inducted two new members: Lucille Ball and Desi Arnaz, the ultra-famous wife-and-husband team that created I Love Lucy.

But the evening rapidly turned tragic 10 minutes into the main act. Presenting comedian Harry Einstein collapsed onstage, and in front of a live audience, died.

A famed comedian, writer and character actor, Harry Einstein was born in Boston, Mass. on May 6, 1904. Though he was known professionally by his Greek-speaking alter-ego “Nick Parkyakarkus,” Einstein was of Jewish-American heritage.

Starting as a journalist in Boston, Einstein was encouraged to pursue comedy as a profession by friends. He got his big break as a performer on Eddie Cantor’s radio show in 1934 when he appeared as his character the Greek chef Nick Parkyakarkus. Einstein’s humor was replete with puns and misdirection. He pronounced his Greek character “park your carcass” and often went by pseudonyms like Harry Parke.

He thus became famous as a specialist in Greek dialect comedy and after his performance on the Eddie Cantor program, Einstein joined the Al Jolson radio program as well. 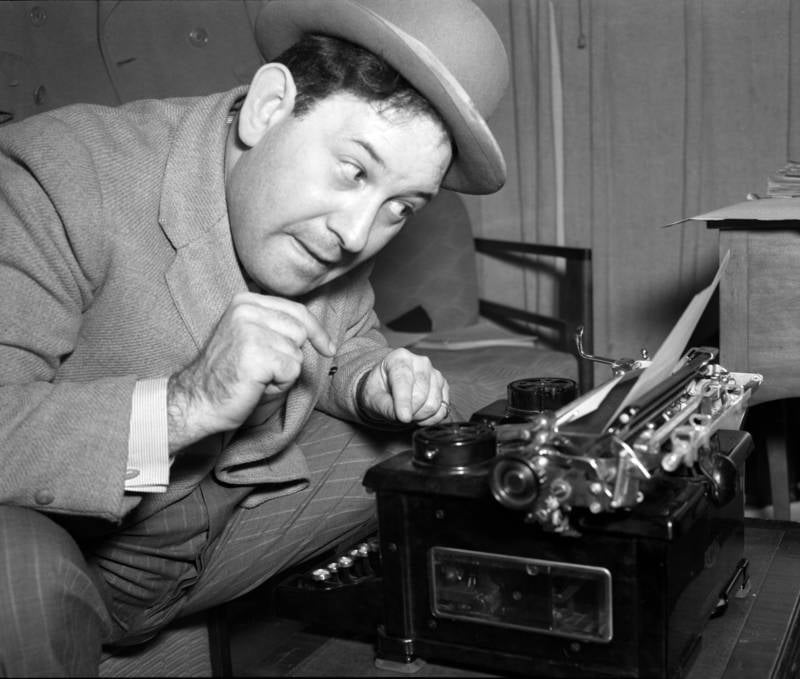 CBS via Getty ImagesHarry Einstein as Parkyakarkus on The Al Jolson Show, Feb. 1, 1938.

This led to a myriad of film appearances as Parkyakarkas, or a close variant from 1936 to 1945. While working on one film he met his wife, Thelma Leeds. The two married in 1937.

Einstein in action in 1944 in a wartime musical making fun of the Russians.

Einstein enjoyed success, he even acquired his own radio program in 1945, called Meet Me at Parky’s which oftentimes featured his alter-ego.

Such bigwigs as Art Linkletter, Milton Berle, Lucille Ball, and Desi Arnaz were all in Einstein’s circle of influence. 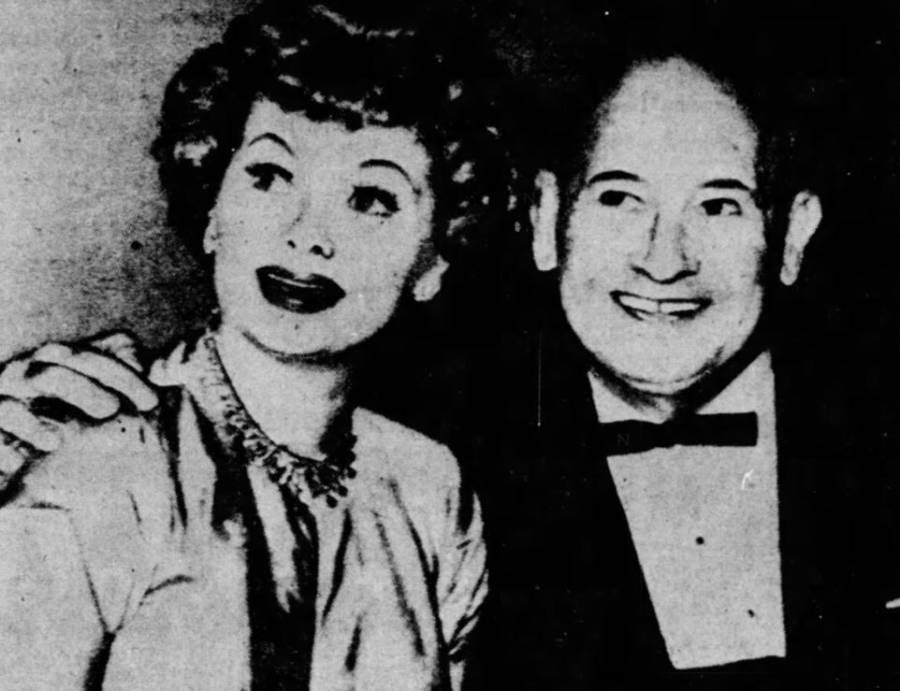 Einstein battled heart disease all his life. Meanwhile, his show was canceled and Einstein’s comedic work became confined to Friars Club roasts. Consequently, Einstein took to the stage amid thunderous applause at the Friars Club on the evening of Nov. 23, 1958, to roast his pals Ball and Arnaz. There was plenty of good-natured ribbing.

In the background of this final recording, Arnaz’s belly laughs punctuated the crowd noise.

At the end of Einstein’s 10-minute act, Art Linkletter, who emceed the evening, returned to the stage and Einstein resumed his seat next to comedian Milton Berle.

Linkletter was in awe, as was the audience, who gave Einstein a standing ovation: “I’ve seen Harry at a dozen of these Friars benefits. Every time he finishes I always ask myself, ‘Why isn’t he on the air in primetime?'” Linkletter wondered aloud. 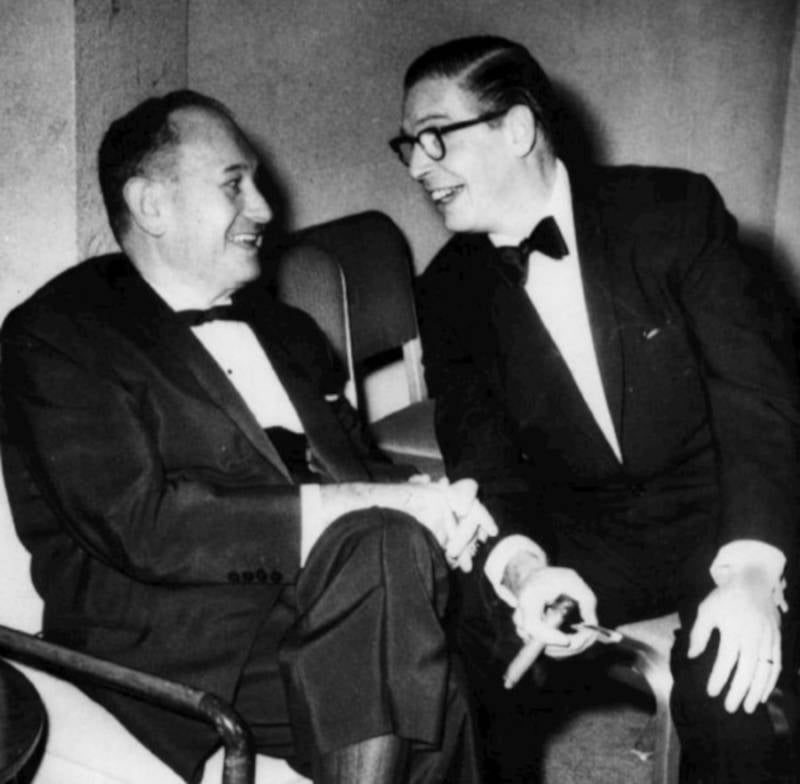 Wikimedia Commons Harry Einstein, moments before his death in 1958. Milton Berle is on the right, cigar in hand.

Harry Einstein then collapsed onto Berle’s shoulder. Even though the crowd continued to giggle and applaud, his buddy didn’t think this was a laughing matter. He yelled, “Is there a doctor in the house?”

In fact, there were five, all of whom rushed to the stage. Einstein was taken backstage and one doctor sterilized a pocket knife, cut open Einstein’s chest, and massaged the comedian’s heart in his own hands right there behind the curtain.

Another doctor took two ends of an electrical cord to try to shock the heart back into a regular rhythm. Paramedics arrived with a pulmotor machine and blood transfusions.

Einstein’s wife watched in anguish and cried on the shoulder of her 18-year-old son, Clifford.

While doctors worked on Einstein, Berle appealed to Tony Martin to sing a song to the audience. His sad choice was “There’s No Tomorrow.” George Burns, also in attendance, sang as well. In between laughter, the pulmotor machine was heard in the background.

Martin’s choice was ironically fitting. Doctors tried in vain for two hours to resuscitate the beloved comedian but Einstein was pronounced dead at 1:20 a.m. on Nov. 24. The cause of death was a massive heart attack.

Arnaz, Einstein’s dear friend, said as the closing statement of the evening:

“This is one of those moments that Lucy and I have waited a lifetime for but it’s meaningless now. They say the show must go on. But why must it? Let’s close the show now by praying for this wonderful man backstage who made the world laugh.”

Harry Einstein was 54 at the time of his death. He was awarded a Star on the Hollywood Walk of Fame for Radio. 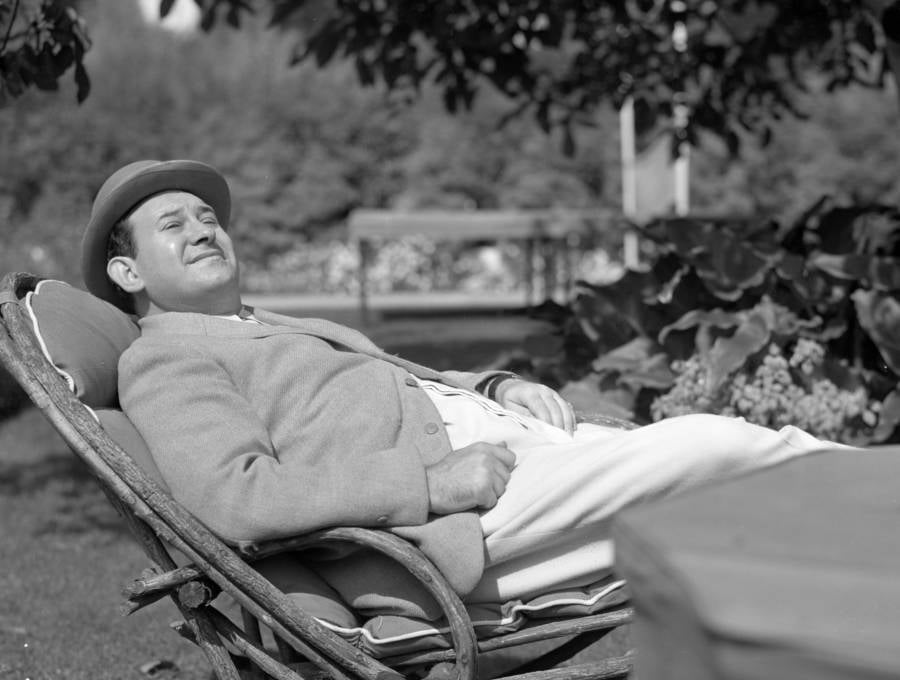 Einstein and his wife had four children, all boys.

The youngest son, Albert, was all of 11-years-old when he lost his father. He changed his last name to “Brooks” to avoid being known as yet another Albert Einstein.

Albert Brooks is today a well-known comedian in his own right and carries on his father’s legacy. Brooks ranks in the top annals of acting as an Academy Award nominee for Best Supporting Actor for his role in 1987’s Broadcast News.

Brooks’ perhaps most famous role to date is that of Marlin, the clownfish father of Nemo in Finding Nemo and Finding Dory. Other film roles include Tom in Taxi Driver and Daniel Miller (opposite Meryl Streep) in Defending Your Life.

Brooks started out as a stand-up comedian. His routines included an incompetent ventriloquist and his bit on exhaustion of ideas. Critics likened Brooks’ brand of comedy to Andy Kaufman before Kaufman made it popular.

Of his father’s death, Brooks has said that he was amazed that his father got through the entire routine. The comedian was certainly a showman to the end.

After this look at the unfortunate end to comedian Harry Einstein, read about Lee Morgan, a jazz trumpeter shot and killed by his angry wife during a live performance. Then, find out about the shocking assassination of Inejiro Asanuma, a Japanese politician killed while debating on live TV.