The remains of two women and one man were uncovered between the foundation and the wall of the 5th-century Wolseong palace complex in southeastern Korea. 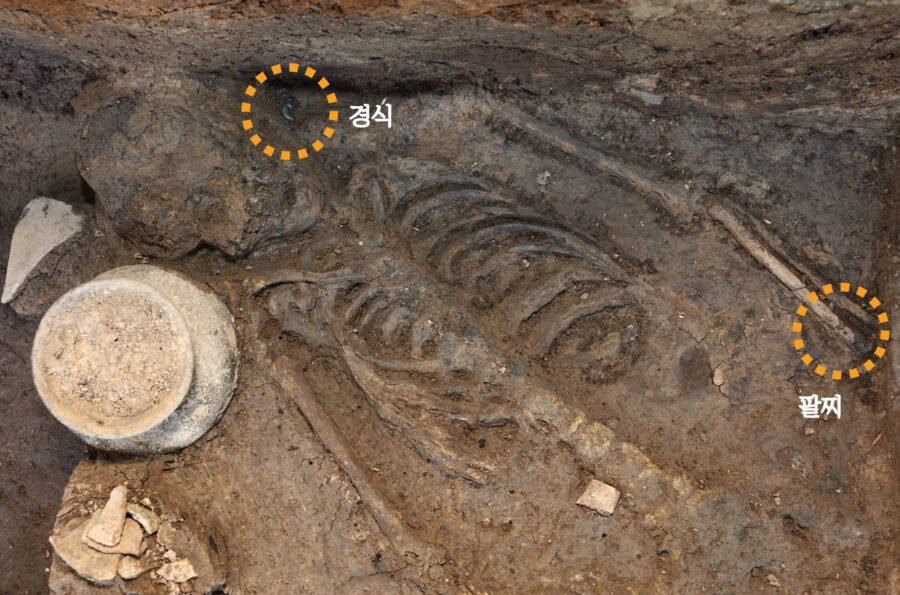 Gyeongju National Research Institute of Cultural HeritageThe woman died in her 20s, and was buried with a necklace and bracelet as denoted by the circles.

The notion that ancient Koreans engaged in human sacrifice during large-scale construction projects has been a mere myth for centuries, relegated to folklore and legend. That is until archaeologists unearthed human remains at the Wolseong palace complex in 2017.

Experts believed the couple was sacrificed as an offering to ensure the walls would be strongly built and the building remained standing, but as the first discovery of its kind in the country, their conclusions were best guesses at most.

Now, according to Korea JoongAng Daily, another set of human remains recently unearthed at the Gyeongju, North Gyeongsang site is now bolstering the notion that this practice was indeed once tradition. Found less than two feet from the adult male and female excavated four years ago, this latest victim confirms the human sacrifice theory.

The palace itself was built during the Silla Dynasty between 57 B.C. and 935 A.D. Each of the three victims was laid to face the sky and showed no signs of struggle but clear evidence of malnourishment likely indicative of their lower class. For Soongsil University professor Choi Byung-heon, the data speaks for itself.

“Now with the additional discovery, there’s no denying Silla’s practice of human sacrifice,” he said. “After finishing off the foundation and moving onto the next step of building the fortress, I guess it was necessary to really harden the ground for the fortress to stand strong.”

“In the process, I think the Silla people held sacrificial rites, giving not only animals but also humans as sacrifices.” 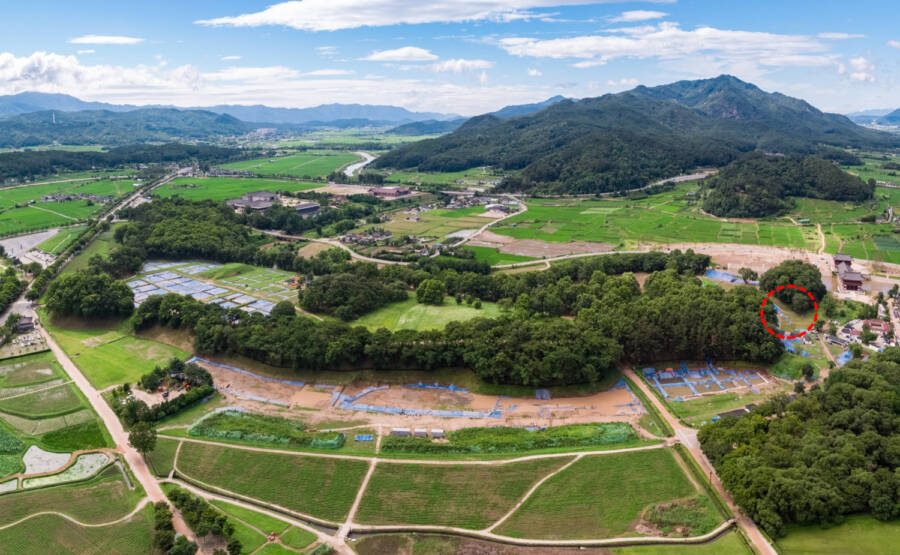 The first two sets of remains unearthed in 2017 served as the first evidence that the ancient Silla people practiced human sacrifice. Both the man and woman were found to have been in their 50s when they died, with all three victims dug out from the bottom layer of the palace’s western wall.

Researchers thus believe that these people were sacrificed after the foundation of the fortress was completed, but before construction of the walls began. Archaeologists discovered the latest set of human remains in April, but the Gyeongju National Research Institute of Cultural Heritage (NRICH) just completed their analysis last week.

“The first thing we do when we find human remains is figuring out the gender and age,” said Kim Heon-seok of the NRICH. “Though her remains were also in good condition, her pelvis, which we use to find out the gender, was damaged, so we had to look at other things like her physique and height to figure it out.”

The research team also discovered animal bones, a necklace, bracelets, and intact pottery next to the woman’s head. These items mirrored the previous excavation in 2017, during which four pieces of pottery were found next to the adult male and female’s feet. 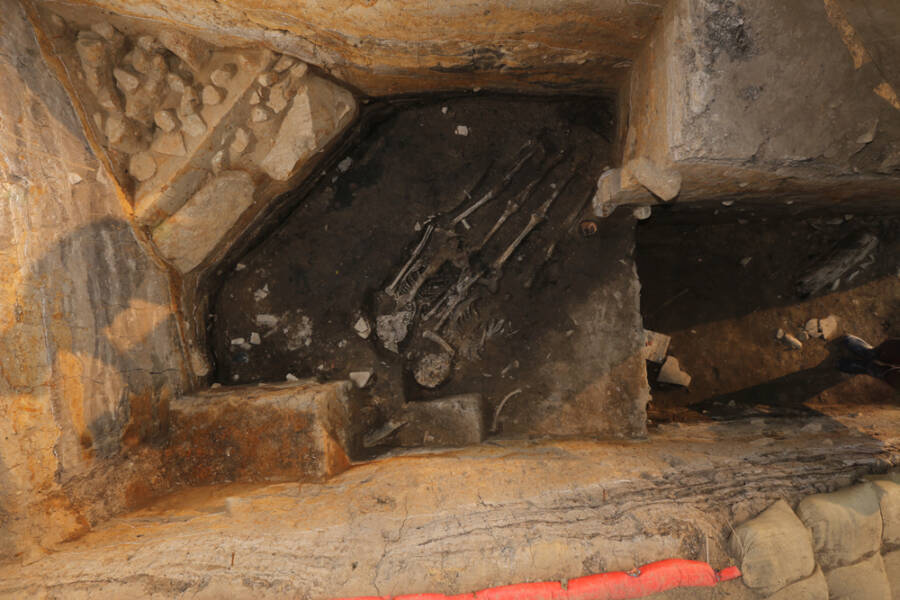 “When we did an x-ray of the pottery, we found a smaller bowl inside the jar,” said Jang Ki-myeong of the NRICH. “It looks like the larger pottery carried alcohol or some kind of liquid. It was buried together with the body.”

Jang said the discovery of the jar was uncommon, though similar to what was found at the 2017 site, suggesting they were linked. And, like the remains discovered in 2017, he said, “the recently discovered remains of a female adult showed no sign of struggle.”

The beaded jewelry and animal bones are reminiscent of finds at other sites of human sacrifice from the 5th century found elsewhere in the country.

The remains were found on the palace wall’s first layer next to the western gate. As Professor Lee Seong-joo of Kyungpook National University explained, ancient human sacrifices in neighboring China were typically found at entrances of such construction projects. 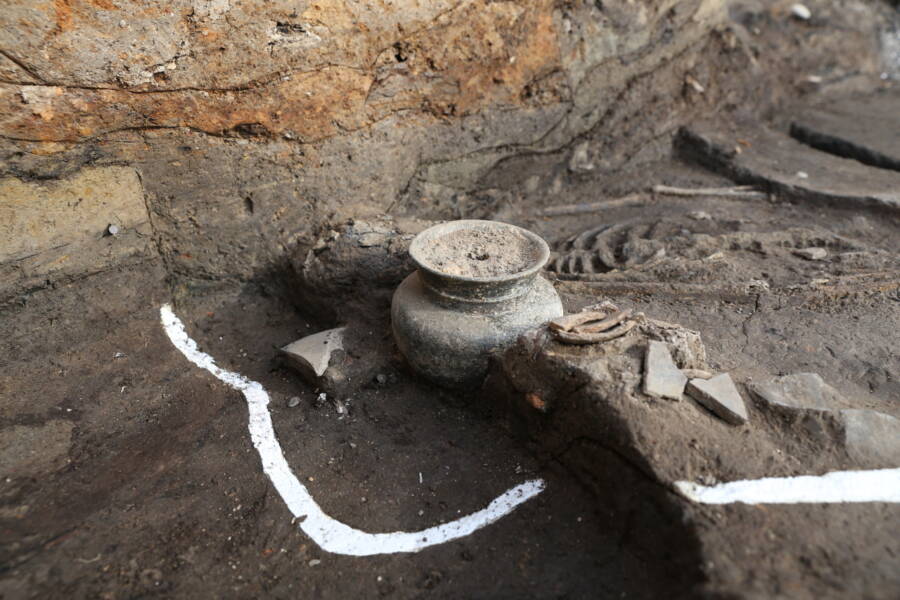 “Historical records say such rituals were carried out before making the gates or just before engaging in the most important part of the construction process,” said Lee.

Ultimately, these aren’t the first sets of human remains discovered at Wolseong. Across two excavations in 1985 and 1990, NRICH researchers found the remains of 20 people. However, none of them were in good enough condition to make any judgment regarding how they died or whether they were sacrificed.

The discovery also puts to rest a long-standing debate over when the Wolseong castle complex was constructed. Competing theories suggested it was either built in the 2nd century or the late 4th and early 5th centuries. With these remains dated to the 5th century, archaeologists finally have a solid timeline for construction.

“By analyzing the data collected through a newly adopted technology known as AMS [Accelerator Mass Spectrometer] and cross-checking with the existing data we have, we were able to provide a more reliable construction period,” said Jang.

Wolseong undoubtedly holds far more secrets to be dug from the dirt. Listed as a UNESCO World Heritage Site, the complex, which translates to “Moon Castle,” spans more than 215,000 square feet, only parts of which have been excavated.

After reading about the human remains discovered at a South Korean palace from the Silla Dynasty, learn about the largest mass child sacrifice site in the world. Then, read about Moloch the ancient god of child sacrifice.