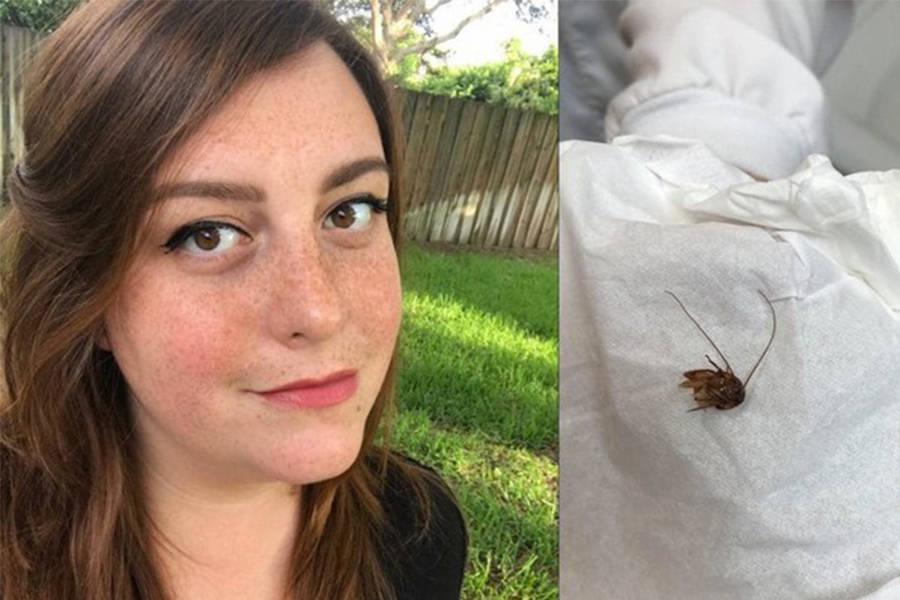 Penn Live newsKatie Holley and the piece of cockroach that lived in her ear for over a week.

After spending one night at the emergency room getting a cockroach pulled out of her ear, Florida resident Katie Holley thought the worst was over. But when her ear still didn’t feel right nine days later, she feared the worst — that the little creeper might still be in there.

Holley first noticed a problem back in April. As she was sleeping, she was jolted awake by something cold sliding into her ear. She had no idea what it was, initially believing it to be a piece of ice, so she went into her bathroom and slowly investigated with a cotton swab.

To her horror, she felt something move. As she pulled out the cotton swab, she saw that it was covered with small dark brown pieces, like little tiny legs.

After her husband further investigated his wife’s ear with a flashlight and a pair of tweezers, Holley realized what had happened. A cockroach, something the Holley household had been dealing with for a year, had burrowed its way into her ear.

Despite the fact that it was almost two in the morning, Holley and her husband Jordan immediately went to the emergency room. After lying on her side, in the hopes that the bug would fall out, a nurse inserted a needle into Holley’s ear to inject the bug with Lidocaine in order to kill it.

After two minutes of feeling the cockroach twitch and wriggle, Holley said she felt it stop moving. After a few moments, the doctor pulled out the dead bug in chunks. Then, Holley was sent home with a prescription for antibiotics.

However, after over a week Holley’s ear still felt unusual. It had been nine days and her ear was still numb and causing her pain when she yawned or opened her mouth. Additionally, the prescription ear drops that she’d been given were no longer going all the way into her ear, leading her to believe there was a blockage.

She went to her usual physician, and told him what had happened, asking him if he could check her ear once again. He did, flushing it four times and looking through it using an otoscope. To her surprise, he found a cockroach leg and six more pieces of the roach’s remains.

After pulling out all he could reach, Holley’s doctor sent her to an ear nose and throat doctor (ENT) to double check that everything was out. After having her ear examined twice, Holley was hoping that something like a “teensy leg or two” would be all that the ENT would find.

To her horror, he pulled out the head, torso, limbs and long antennae of a fully grown cockroach. The bits that the emergency room doctor and Holley’s own physician had pulled out had just been legs and tiny parts. The bulk of the bug had sat, dead, inside Holley’s ear for nine whole days.

“I was furious. I was really disappointed with the ER for not having seen that, for letting me believe it was all out,” Holley told The Washington Post. “They said this is something that happens often. I was told there’s no need to see anyone or a specialist.”

Though the silver lining of the matter is that palmetto bugs, the kind of winged cockroach that was found in Holley’s ear, don’t bite and that this kind of thing really does happen often, Katie Holley was still beside herself.

Holley and her husband have since purchased earplugs.

Next, check out these scary house bugs that might be living in your home right now. Then, read about the creepiest insects in the world.