Based on a 34-million-year-old skull, researchers have discovered that those gentle baleen whales likely used to be much more predatory. 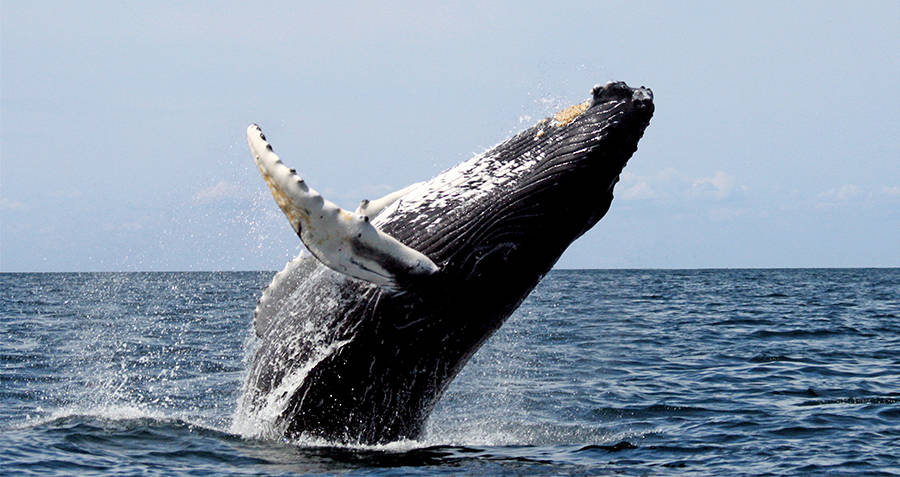 Wikimedia CommonsOnce upon a time, baleen whales like this humpback could have had rows of teeth instead of baleen.

A new study revealed that Ancient baleen whales were actually hardly baleen whales at all, and in fact had an entire mouth full of teeth, suggesting they were much more predatory than their modern-day relatives.

New research, performed by scientists at the Royal Belgian Institute of Natural Sciences in conjunction with the University of Otago in New Zealand and published in the journal Current Biology shows that the earliest baleen whales likely didn’t even have baleen, but instead possessed rows of sharp teeth.

Baleen whales, which include humpback whales, blue whales, and right whales, are named for the bony comb-like filaments that fill their mouths and assist with filter feeding. Baleen whales suction seawater into their mouths, along with smaller fish and krill. The baleen allows for the water to leave the whales mouth while keeping the prey inside.

Before the new study, it was believed that baleen whales were always filter feeders, who fed on smaller life forms. However, based on the fact that a 34-million-year-old baleen whale skull found in Antarctica, had no baleen, and instead had rows of teeth, that idea is being challenged. Now, scientists believe that baleen whales could have been more fearsome predators.

“Having teeth is not per se enough to conclude that an animal was a predator, but their shape and the way in which they are worn give some important clues,” said researcher Felix Marx, in an interview with All That’s Interesting. Marx is a researcher with the Royal Belgian Institute of Natural Sciences. 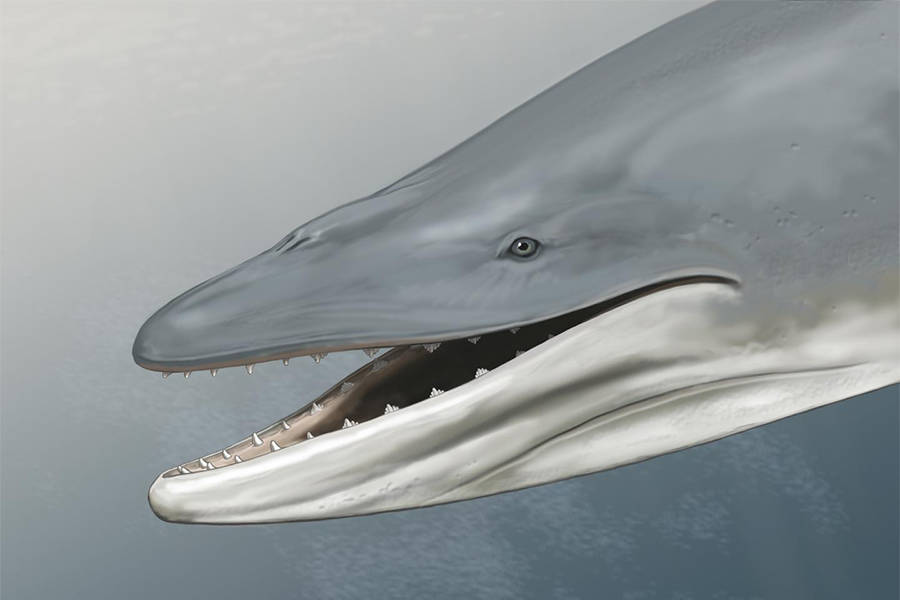 A rendering of what the toothed baleen whales could have looked like.

“In the case of Llanocetus, [the ancient baleen whale found] we know that the teeth were sharp, and that their tips were worn by contact with food – i.e. Llanocetus bit down on relatively large prey.”

“Importantly, Llanocetus did NOT filter tiny prey from the surrounding water, like its living whale cousins,” Marx continued. “Its teeth were simply not suitable for that, and it seemingly had not yet evolved baleen.”

Marx described the teeth as being sharp, though not quite serrated like a shark’s.

“They were not serrated, but each had a series of cusps, aligned in a row,” he explained. “The cusps themselves had sharp cutting edges, and strong vertical ridges running down their sides.”

So why did this ancient Llanocetus evolve from predatory toothed whales to gentle baleen giants? Marx says it was likely to shorten the food chain and use their energy more efficiently.

“Living dolphins, just like their ancient toothed whale cousins, target individual prey items. By contrast, filter feeders like whales consume vast amounts of prey that is much smaller than themselves,” he explained. “In doing so, they shorten the food chain. Imagine the following two scenarios: in the first, an alga is eaten by a little crustacean, which is then eaten by a little fish. That fish, in turn, is eaten by a larger fish, and that larger fish, finally, is caught by a dolphin (or an ancient whale with teeth).”

“In the second, the alga is again eaten by a little crustacean, but then the crustacean is swallowed directly by a whale. In other words, the whale cuts out some of the ‘middlemen’. This is important since every time one animal is eaten by another, an enormous proportion of the energy stored in the prey (about 90 percent) is lost. By avoiding much of this loss, whales feed more efficiently and thus can draw on a much larger resource base.”

The baleen also likely evolved over time, and as a byproduct of filter feeding. As the whales began to filter feed in order eat more efficiently, they were presented with the problem of keeping their small prey in their mouths while ensuring they didn’t swallow seawater. Thus, Marx explained, the baleen came along.

So, just remember next time you’re in awe of these gentle giants, that they probably used to be a lot more fearsome than they seem.

Next, read more about an endangered species of baleen whale. Then, check out this huge gang of killer whales that chased down an Alaskan fishing boat.