The 100-million-year-old specimen was found inside an ancient female crustacean, meaning she was fertilized shortly before her demise. 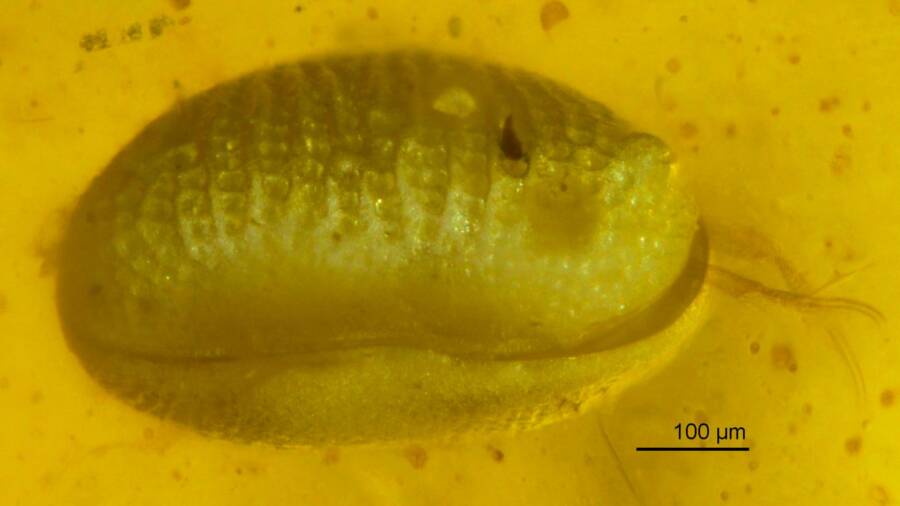 He Wang & Xiangdong ZhaoOstracods, one of which is pictured here, are ancient shrimp-like crustaceans. Some species still exist today.

An international team of paleontologists has just discovered the oldest sperm in the world. The 100-million-year-old specimen belongs to a newly-discovered species of ancient crustacean that was found trapped in Myanmar amber. Remarkably, it’s been preserved since the mid-Cretaceous period, when dinosaurs roamed the Earth.

According to LiveScience, the sperm was discovered inside a female species of ostracod known as Myanmarcypris hui, meaning she must have been fertilized shortly before she became trapped in amber.

“The fact that the seminal receptacles of the female are in an expanded state due to being filled with sperm indicates that successful copulation had taken place shortly before the animals became entrapped in amber,” the study confirmed. 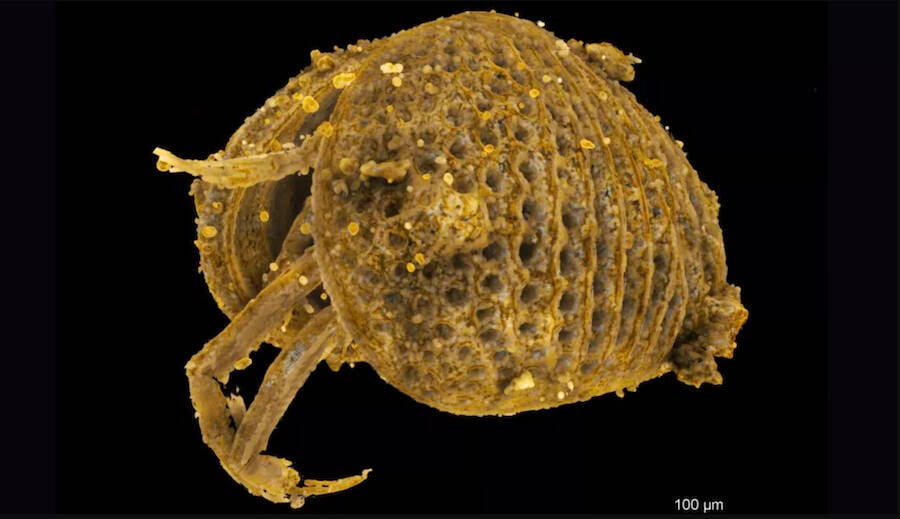 Renate Matzke-KaraszA three-dimensional reconstruction of a male ostracod with its “claspers.”

The amber, which is ancient tree resin, was found inside a Myanmar mine and is no bigger than a postage stamp. Inside it are 38 other ostracods, both male and female, as well as adult and juvenile. Only eight of those specimens were previously known to scientists while the rest belonged to the newly-discovered M. hui species.

But the most enthralling aspect of this discovery was the 100-million-year-old sperm preserved inside the adult female. Inside her well-preserved soft tissues were also four tiny eggs, each smaller in diameter than a human hair.

For He Wang, a paleontologist and postdoctoral researcher at the Chinese Academy of Science, the discovery is a marvel. He reconstructed a three-dimensional image of the ostracod using computed tomography and then sent it to ostracod expert Renate Matzke-Karasz.

“I immediately congratulated him on having reconstructed the oldest animal sperm,” Matzke-Karasz said.

Scientists believe that the male ostracod used its fifth limb, known as a “clasper,” to hook onto the female before pumping an “exceptionally long but immotile sperm” into her. The sperm then traveled up two lengthy canals inside the female, after which the female moved around in order to kickstart fertilization. 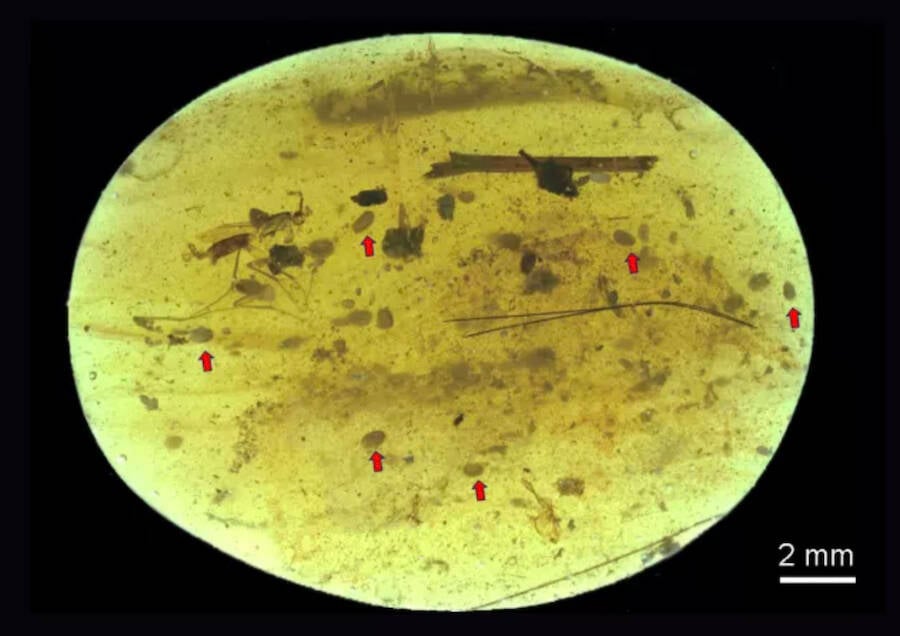 He Wang & Xiangdong ZhaoThe ancient ostracods, 39 in total, were found all preserved in amber inside a Myanmar mine. Thirty-one of these belonged to the new species of ostracod called Myanmarcypris hui.

Before this discovery, which was published in the Proceedings of the Royal Society Biological Sciences, the oldest confirmed animal sperm was 50 million years old and found in a worm cocoon in Antarctica. The oldest-known ostracod sperm prior to this study dated back 17 million years.

Not only is this the oldest sperm on record, but it is also considered gigantic when compared to the size of its host. The ostracod measures 0.02 inches long and its sperm 200-micrometers long, making it one third of the crustacean’s length.

It certainly sounds physically impossible that a crustacean smaller than a poppyseed could contain sperm several times larger than even human sperm. But according to ScienceAlert, that is not unusual for this class of microcrustacean.

This is because the animal’s microscopic sperm cells simply compress into tiny balls that can then travel through the female’s reproductive tract with ease. Some species of ostracod boast sperm cells longer than themselves. Indeed, they can house sperm that is up to 10 times larger than their own bodies. The longest of these measure 0.46 inches when unspooled. 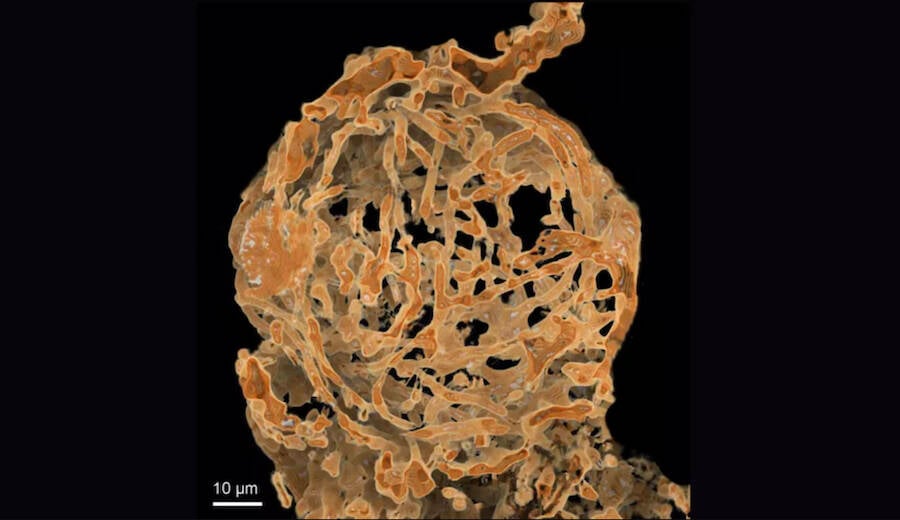 Indeed, Matzke-Karasz is most interested in the size of this ancient sperm. She explained that giant sperm are tremendously energy-intensive and dominate a vast amount of space within the animal. Furthermore, mating takes ages.

It might come as a surprise that some of the smallest creatures on the planet produce some of the largest sperm. Scientists believe bigger units are actually evolutionarily advantageous, however, as females will copulate with more than one mate and the sperm will be forced to compete.

“You might think that this doesn’t make sense from an evolutionary standpoint,” Matzke-Karasz said. “But in ostracods, it seemed to work for more than 100 million years.”

After learning about the oldest sperm ever found, read about how scientists were able to extract liquid blood from a 42,000-year-old Siberian foal. Then, learn about the 180-million-year-old fossil believed to be the missing link in the crocodile family tree.