It was nearly impossible to bury all the corpses that fell onto the battlefield, leaving some to say that their spirits still linger over a century later. 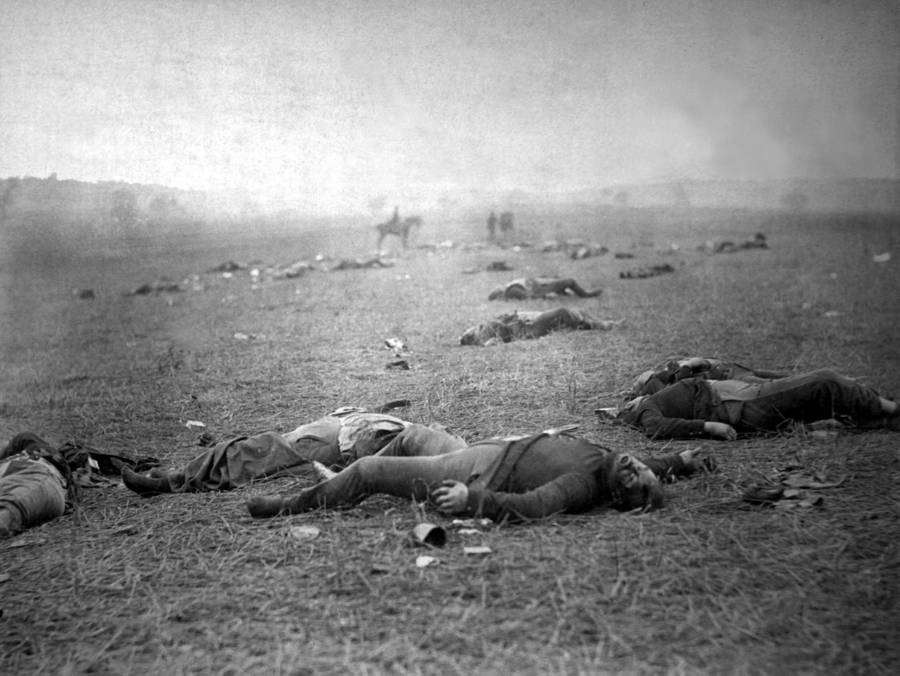 Timothy H. O’Sullivan/Wikimedia CommonsThe Battle of Gettysburg saw 50,000 casualties, making it the bloodiest conflict of the American Civil War. Some say those souls remain on the haunted Gettysburg field.

The Battle of Gettysburg was the Civil War’s grisliest, and the carnage it wrought is said to linger on the battlefield even today.

The battle began on July 1, 1863, when Confederate Army General Robert E. Lee confidently marched his troops through Pennsylvania, where they planned to launch an attack on Union forces. But miscalculations on the battlefield cost the Confederacy the fight — and many lives. A total of nearly 51,000 casualties were tallied by the end of the three-day battle.

Many of the dead had to be quickly buried near the battlefront. Although most of the dead were later moved for a proper burial, many were left behind. Ever since, there have been ghostly sightings of dead soldiers reported by locals and visitors. Some of these Gettysburg ghosts have even allegedly been captured on camera.

Greg Yuelling claimed to have captured these Gettysburg ghosts.

Indeed, just this past September in 2020, Greg Yuelling of New Jersey claimed to have captured two ghosts crossing the road in front of him as he passed through Gettysburg.

The town’s reputation as the site of one of the bloodiest battles of the Civil War has made it popular among both history buffs and fans of the supernatural, many whom have come to visit spots around town where the alleged hauntings have occurred.

The Battle Of Gettysburg Was A Bloodbath 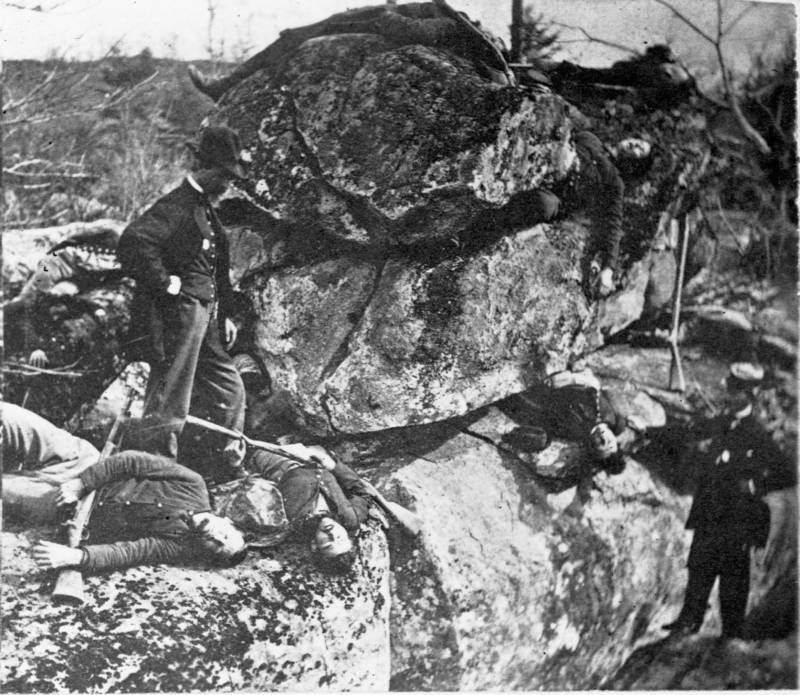 The Confederate Army arrived in Pennsylvania confidently under the command of Gen. Robert E. Lee, who was riding high from his previous victory at Chancellorsville.

Much to his dismay, however, his army waned during the conflict. A combination of faulty intelligence and ineffective battle strategies compounded in a Confederate loss and the Union’s victory at Gettysburg was no doubt a turning point for them in the Civil War.

The Battle of Gettysburg had been particularly gruesome, having lasted for three days with 8,000 men killed outright on the battlefield. The extent of the carnage established Gettysburg as a “harvest of death.” 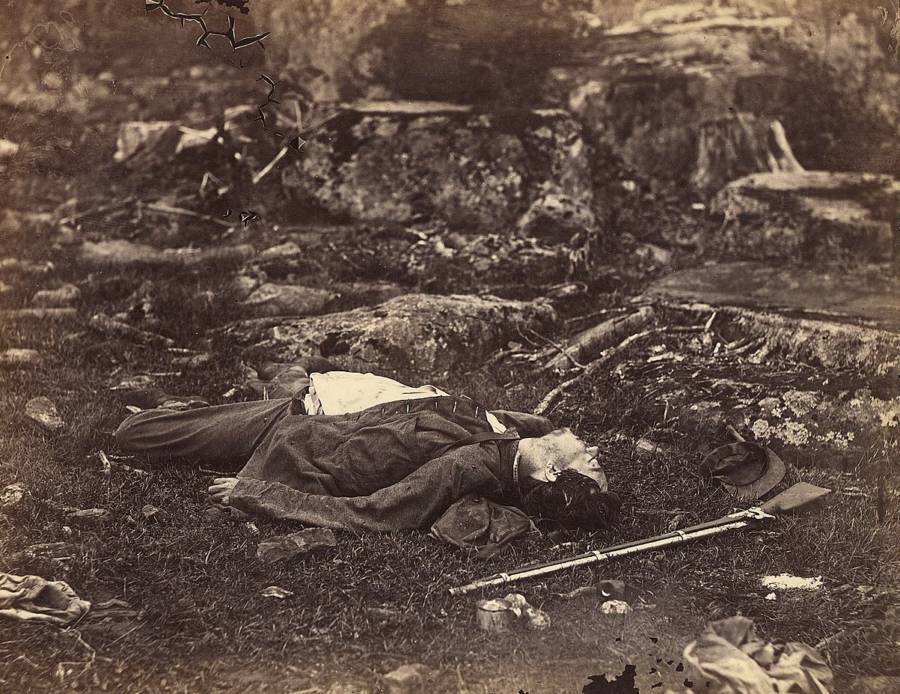 Timothy H. O’Sullivan/Wikimedia CommonsDead soldiers at Gettysburg. The extent of bodies buried at the site has spawned rumors of ghost sightings.

Accounts from survivors paint a vivid scene of horror, like this recollection from a New Jersey soldier:

“Some with faces bloated and blackened beyond recognition, lay with glassy eyes staring up at the blazing summer sun; others, with faces downward and clenched hands filled with grass or earth, which told of the agony of the last moments… Here, a headless trunk, there, a severed limb; in all the grotesque positions that unbearable pain and intense suffering contorts the human form, they lay.”

The number of bodies was said to have reeked. The stench of corpses — both of men and horses — that had baked in the sun-filled air. Some 3,000 horse carcasses had to be burned, and they reportedly caused the townsfolk to grow ill from the stench. Simple burials were done quickly between the fighting in order to quell the odor, but the efforts could not keep up with the death count. 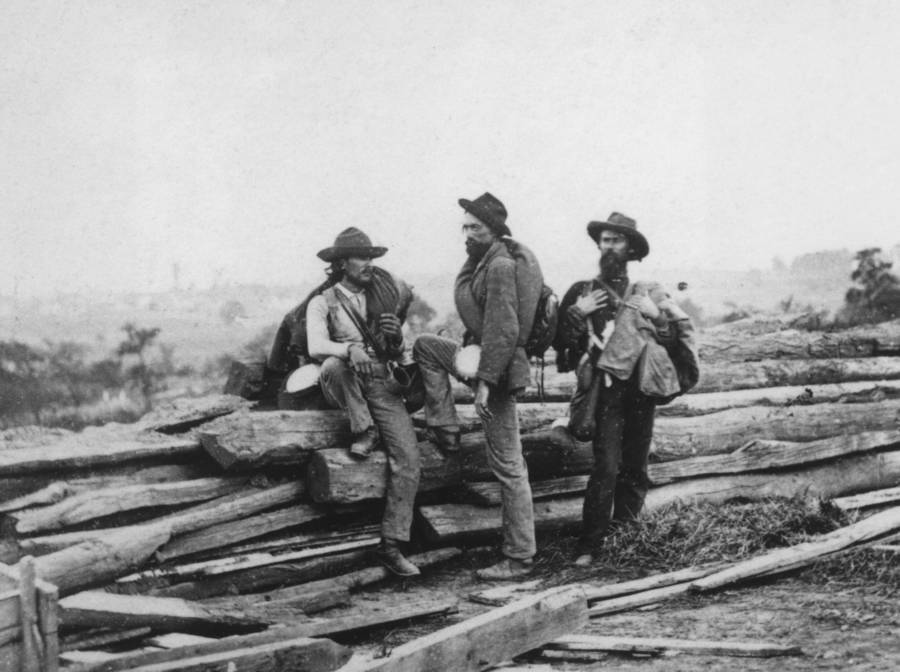 The corpses were later exhumed and reburied at the newly-formed National Military Park Cemetery. But the number of dead bodies was so great that not all the remains were successfully moved.

In fact, remains from the Battle of Gettysburg were still being uncovered in 1996 — over 130 years after the war.

It’s perhaps no surprise, that there have been sightings of so-called Gettysburg ghosts. 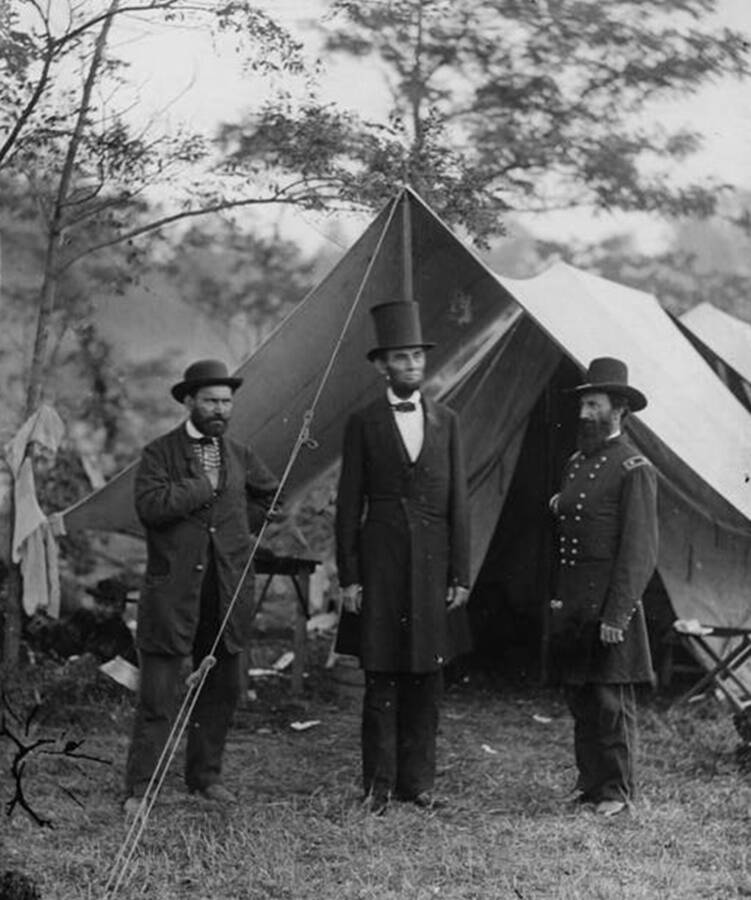 Alexander Gardner/Library of CongressAbraham Lincoln at the Battle of Gettysburg.

Talks of phantom figures trawling the small town at night have made its way to the mainstream consciousness, adding a supernatural flair to the town’s name. Among the strangest claims include sightings of the Confederate Army leader himself, Gen. Robert E. Lee, who died peacefully at his Virginia home long after the battle.

Nevertheless, thrill-seekers and ghost hunters have descended upon the haunted Gettysburg. The popular tours of the historic and haunted Gettysburg field are nearly rivaled by the ghost tours available around town. 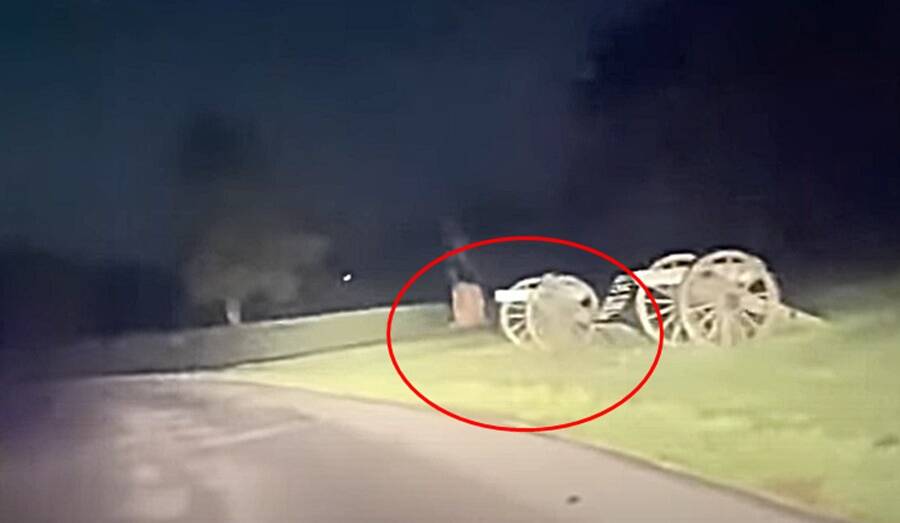 At the Cashtown Inn, where the first soldier of the Gettysburg campaign was allegedly killed, strange orbs and skeletons have allegedly been captured in photographs taken by Jack Paladino and his wife, the owners of the establishment. They claim that guests have reported thumping doors, flickering lights, and inexplicably locked doors while staying at the inn.

More sightings have been reported from other overnight establishments like the haunted Gettysburg Hotel, where a ghostly woman has been seen dancing inside the hotel’s ballroom. Paranormal investigators who have come to inspect the site claim the spirit of Union soldier James Culbertson of Company K under the Pennsylvania Reserves also roams the hotel at night.

The most recent independent sighting was Yuelling’s, which went viral when he shared it online. Yuelling said he had been driving through the battlefield late at night with his family when they spotted what they believed to be two soldiers crossing the road.

“We were driving along one night and we started hearing noises, I heard things to the left and my uncle heard things to the right, and there was a fog, but the fog was weird, it was only in one patch not dispersed,” Yuelling told The Sun. “It was scary, it was crazy… I couldn’t go to sleep.”

Whether real or not, the alleged haunting of Gettysburg reveals more than our fascination of the supernatural. It is also a testament to the unbelievable amount of blood that was shed during the battle and the unknown souls possibly still trapped on the battlefield.

After this look at the alleged ghosts of Gettysburg, go inside the Andersonville prison, the Civil War’s most brutal POW camp. Then, meet the five most badass women of the Civil War.