Someone Just Paid Over $81,000 For A Blood-Stained Lock Of Abraham Lincoln’s Hair

The lock of hair was clipped from Lincoln's head the day after he died and wrapped in a War Department telegram that the First Lady's cousin had in his pocket. 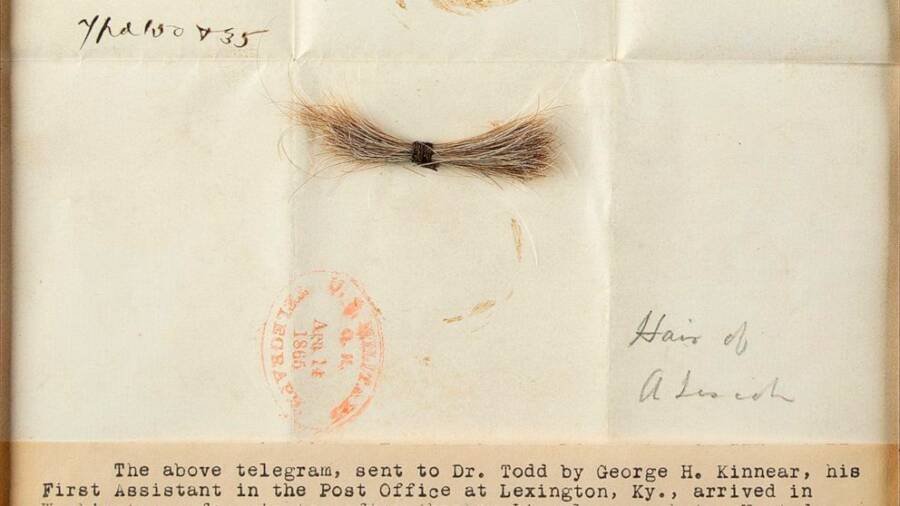 RR AuctionThe lock of hair has been safeguarded for 155 years.

A lock of President Abraham Lincoln’s hair and a telegram smeared with his blood just sold for $81,250 at an auction that ended on Saturday. According to CNN, the buyer who purchased these historic items from Boston-based RR Auction has chosen to remain anonymous.

How a two-inch lock of presidential hair made it to 2020 without prior public awareness is astounding. Clipped from Lincoln’s head during a postmortem examination the day after his assassination, it was initially given to Dr. Lyman Beecher Todd — a cousin of First Lady Mary Todd Lincoln.

With nowhere to put the unsettling souvenir, Dr. Todd wrapped and safeguarded the hair in a War Department telegram that he had received shortly after Lincoln was shot. The items were passed down through generations, with Todd’s son James A. Todd detailing them in a Feb. 12, 1945 letter.

“He wrapped the lock, stained with blood or brain fluid, in this telegram and hastily wrote on it in pencil: ‘Hair of A. Lincoln,'” wrote Todd.

“The lock of Abraham Lincoln’s hair…was cut from his head and given to my father during the performance of the postmortem and has remained entirely in the custody of our family since that time.”

When it comes to auctioning off history, verifying the items’ authenticity is paramount. While the journey from John Wilkes Booth assassinating President Lincoln at Ford’s Theatre in Washington, D.C. on April 14, 1865, to the modern-day might seem unbelievable — the items were proven legitimate.

“When you are dealing with samples of Lincoln’s hair, provenance is everything — and in this case, we know that this came from a family member who was at the President’s bedside,” said RR Auction Executive Vice President Bobby Livingston.

According to ABC News, the War Department telegram Dr. Todd had received that night was sent to him by George H. Kinnear — his assistant in the Lexington, Kentucky post office he served as postmaster. It’s no surprise that RR Auction’s hopes to sell these items for $75,000 were exceeded. 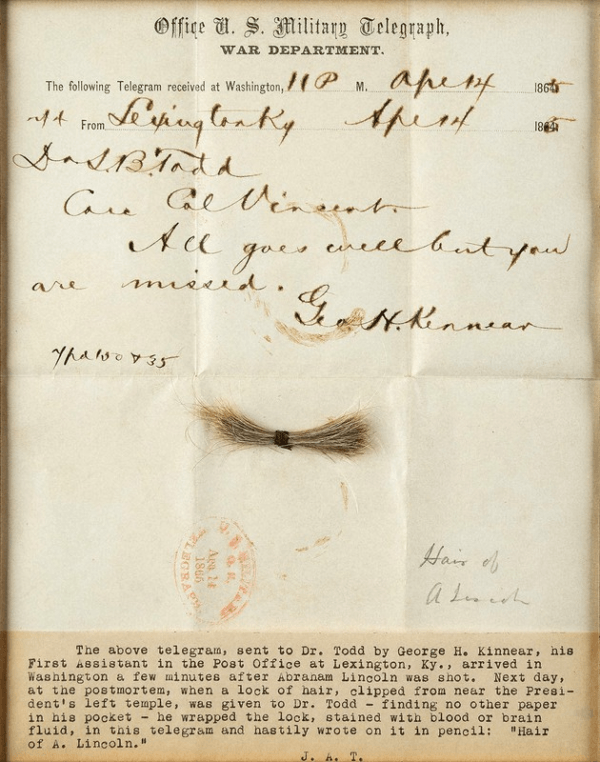 The curious decision to hand Lincoln’s lock of hair to one of his wife’s cousins bears in itself some enlightening historic information. Dr. Lyman Beecher Todd was more than a mere relative by marriage and grew close with the Lincolns during their pre-Civil War visits to Lexington, Kentucky.

It was Lincoln who ensured Dr. Todd was appointed Lexington’s postmaster, which occurred shortly after the President’s 1861 election. Of course, Dr. Todd’s most historic feat was staying at Lincoln’s bedside as he died in the Petersen House — across the street from Ford’s Theatre.

“My father went with Col. Vincent to the President’s bedside and they remained there until his death next morning,” wrote Todd’s son in the letter, adding that his father attended the postmortem examination and the body’s transportation to the White House and burial in Springfield, Illinois.

Abraham Lincoln’s life and legacy continues to mesmerize those interested in American History. From his dubious authorship of the famous Bixby Letter and potential homosexuality to a lock of his hair being safeguarded for 155 years — the layers of Lincoln’s life just keep unfolding.