Did Jeffrey MacDonald Brutally Slay His Pregnant Wife And Daughters — Or Did The Cops Get The Wrong Guy?

Former Green Beret Jeffrey MacDonald claimed that a gang of acid-crazed Manson Family copycats brutally murdered his pregnant wife and two daughters in 1970, but then he was found guilty. 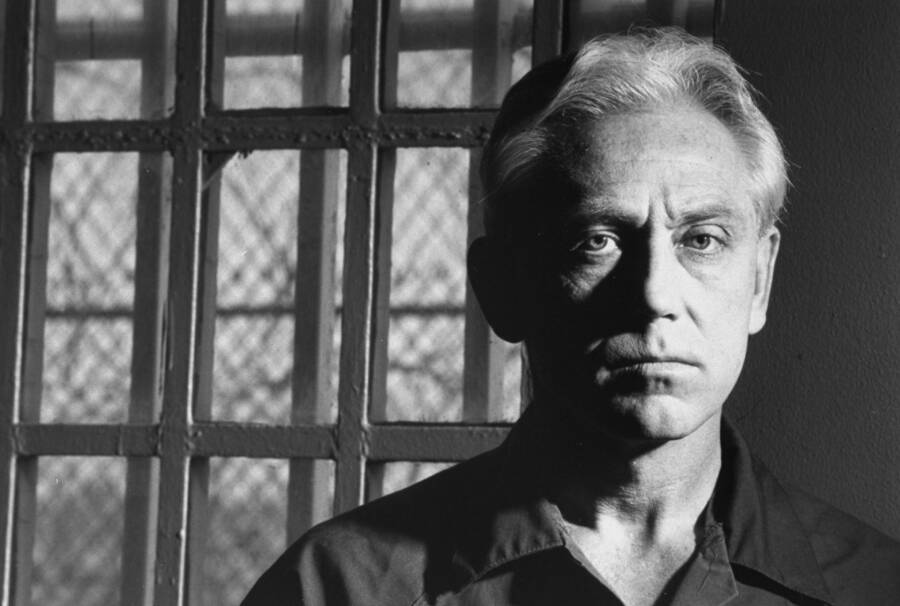 Jeffrey MacDonald had it all. Not only did the U.S. Army surgeon marry his high school sweetheart, but he had a flourishing career, two beautiful young daughters, and a son on the way. However, his American dream suddenly became a nightmare in 1970 when his family was found brutally stabbed to death in their home.

As the only survivor, MacDonald claimed that a mysterious blonde hippie oversaw three male intruders who slaughtered his family. But his story crumbled under scrutiny and he was charged with killing his family. It appeared to investigators that MacDonald had staged the scene, inspired by the recent Manson Family murders to blame hippies for his crime.

Tragically, the comparisons to the Sharon Tate killing were striking. Not only had the word “pig” been scrawled on the bedroom headboard in his wife’s blood — but she and her unborn baby were dead.

Currently serving three life sentences for their murders, MacDonald continues to maintain his innocence even as a new documentary series digs into his case.

Born Jeffrey Robert MacDonald on Oct. 12, 1943, in New York City, the fledgling doctor grew up in Patchogue, Long Island. Friends since grade school, he and Colette Stevens began dating as teenagers, and grew serious during college.

Two years into MacDonald’s undergraduate studies at Princeton, Stevens became pregnant. In the fall of 1963, they decided to get married and in April of the following year, their daughter Kimberly was born. 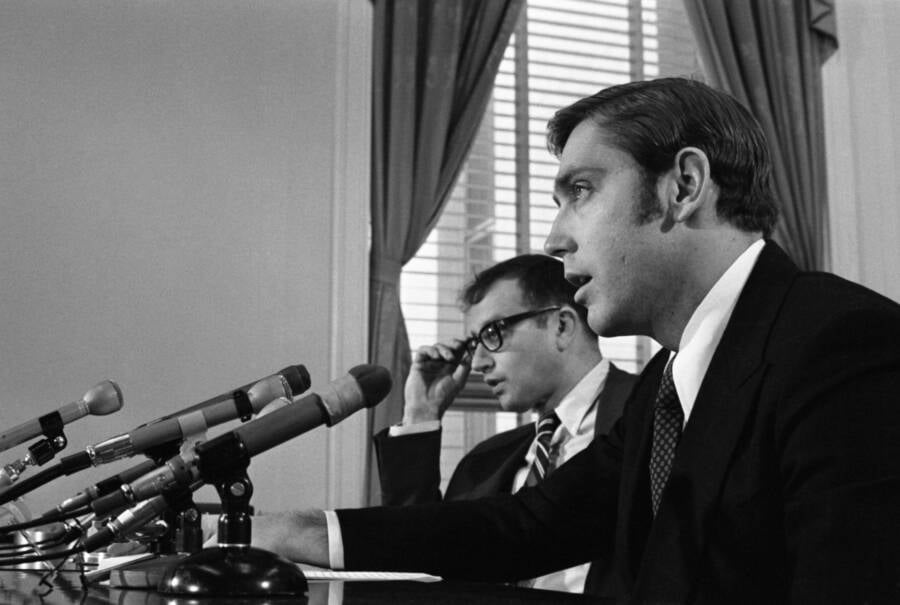 Bettmann Archive/Getty ImagesRep. Allard Lowenstein supporting MacDonald’s claim that the Army wrongfully accused him and were trying to cover up their mistake.

The family moved to Chicago after MacDonald was accepted into Northwestern University Medical School. Their second child Kristen was born in May 1967. Despite the young family’s financial burdens, the important things seemed secure.

It dawned on MacDonald after graduating in 1968 that the U.S. Army could help him advance his career, and he wasn’t wrong. Shortly after relocating to Fort Bragg, North Carolina, he was made Group Surgeon to the Green Berets.

By the end of 1969, everything seemed in order. Colette was relieved to find out her husband would not be stationed in Vietnam — and the whole family was overjoyed to learn she was pregnant for a third time. Sadly, the family wouldn’t survive the next year.

After 3 a.m. on Feb. 17, 1970, dispatchers at Fort Bragg received an emergency call from the MacDonalds’ 544 Castle Drive address. MacDonald said there had been a “stabbing” and begged for an ambulance. Four military police (MP) officers arrived at 4 a.m. to find an unspeakable crime scene.

First responder Kenneth Mica discovered the bodies, with MacDonald laying wounded but alive next to his battered and lifeless wife. 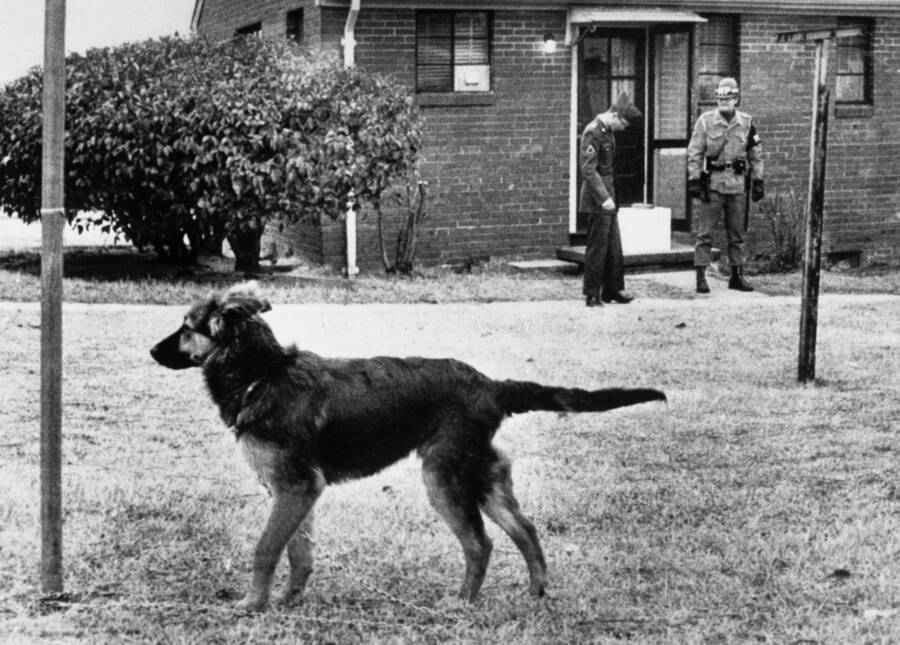 26-year-old Colette MacDonald had been stabbed nearly forty times with an icepick and a knife — while “pig” was scrawled on the headboard of her bed in her own blood. Two-year-old Kristen had 33 knife- and 15 icepick wounds in her torso, while five-year-old Kimberly was bludgeoned to death.

MacDonald had only one stab wound, which the hospital surgeon later described as a “clean, small, sharp” incision that made his left lung partially collapse. After Mica performed mouth-to-mouth, MacDonald came to.

MacDonald claimed that his daughter Kimberly wet his side of the bed, prompting him to go to sleep on the couch. He awoke to the sound of screaming and found three male intruders being overseen by a blonde woman. Desperate to save his family, he said he fought back until they stabbed him and beat him unconscious. 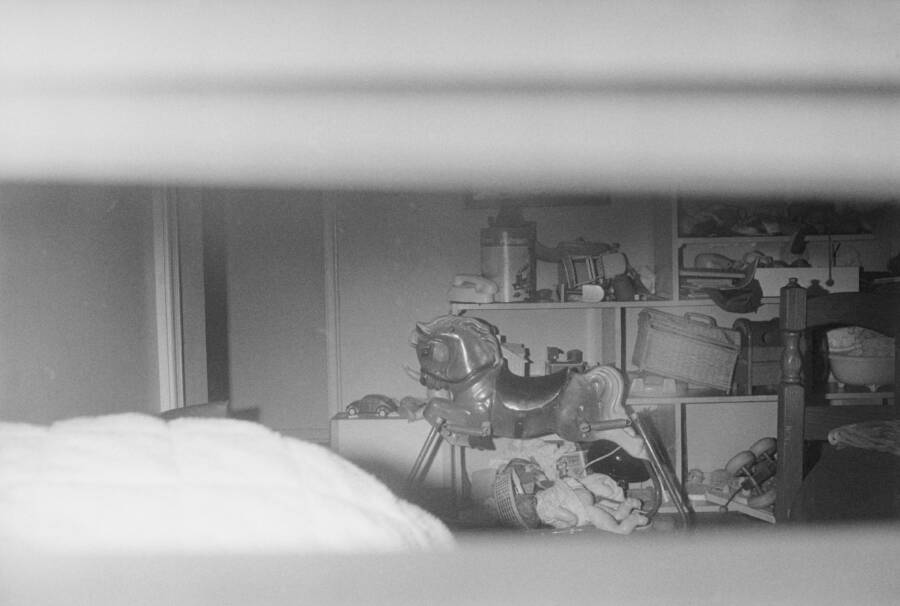 Bettmann/Getty ImagesThe bedroom of Kristen and Kimberly MacDonald, mere hours after they were murdered.

MacDonald claimed the mysterious blonde woman who oversaw the murders was wearing a floppy hat and high-heeled boots and was holding a candle while chanting, “Acid is groovy. Kill the pigs.”

Mica remembered seeing a woman who fit this description while en route to the scene but said the Army’s Criminal Investigation Division (CID) omitted this during their subsequent inquest. No attempt was made to locate the woman that night.

The CID’s five-month-long interrogation (referred to as an Article 32 hearing) began in April, with officials intent on using only physical evidence and MacDonald’s own statements to form their view.

It ultimately concluded that MacDonald’s wounds were self-inflicted, and his story entirely fabricated. Not only did the living room show few signs of a struggle, but the murder weapons were found outside the back door. The surgical gloves used to scrawl “pig” on the headboard were identical to the supply MacDonald kept in his kitchen.

The chanting blonde, meanwhile, had not been found. 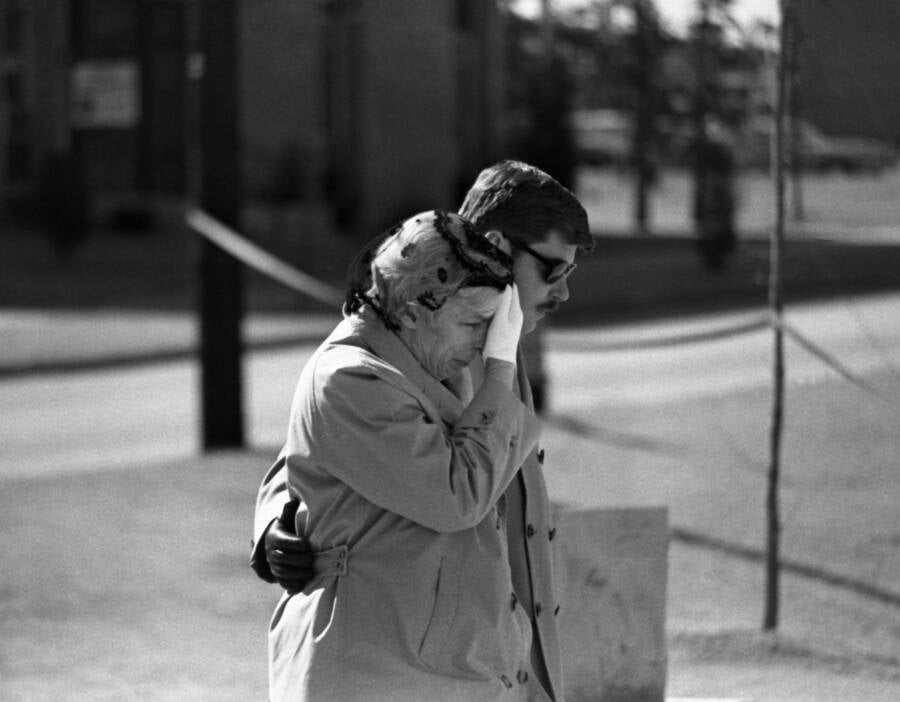 Bettmann Archive/Getty ImagesGrieving mother Mildred Kassab weeps for her daughter while being escorted into JFK Memorial Chapel to see her buried.

Though the U.S. Army formally charged MacDonald with the murders, presiding officer Colonel Warren Rock recommended the charges be dropped. He claimed there was insufficient evidence, while civilian defense attorney Bernard Segal argued the CID had improperly handled the scene — and that alternative suspects like local drug addict Helena Stoeckley, believed to be the blonde woman at the scene, continued to roam free. 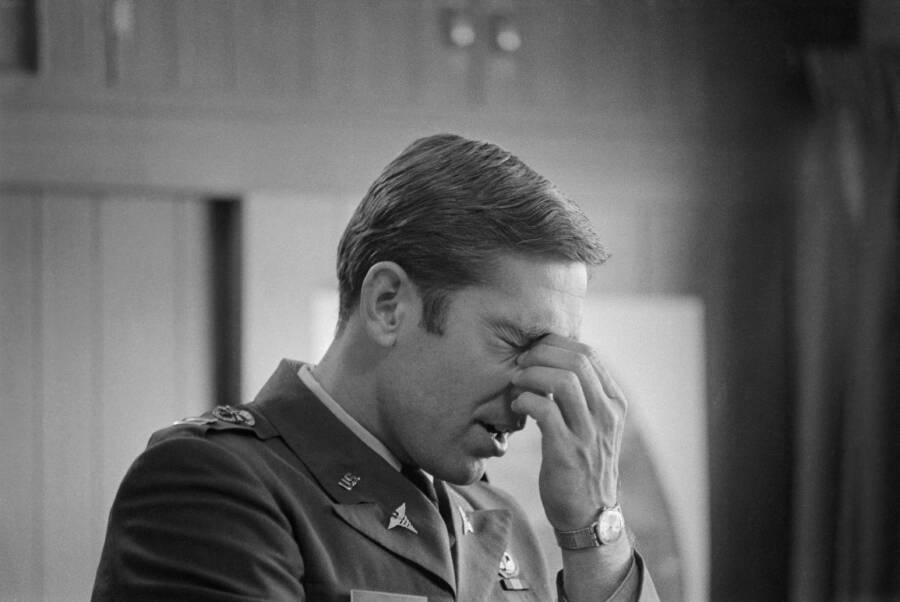 Bettmann/Getty ImagesMacDonald in late 1970 after the Army acquitted him of all charges.

Released and honorably discharged by the Army, MacDonald seemed to be in the clear. Even his in-laws Mildred and Freddie Kassab believed him and testified at his hearing. But, soon after MacDonald moved to Long Beach, California to continue his career at St. Mary Medical Center, and the tide turned once more.

Colette’s grieving parents grew suspicious after a November 1970 phone call in which MacDonald claimed he found and killed one of the intruders. And, in media appearances like his interview on The Dick Cavett Show, meanwhile, MacDonald appeared suspiciously at ease.

After reading the full transcript of his Article 32 hearing, the Kassabs were convinced that MacDonald’s story didn’t add up. Freddie Kassab and CID investigators returned to the crime scene in 1971 to contrast MacDonald’s claims with the evidence and found his narrative implausible.

Kassab filed a citizen’s criminal complaint in April 1974, petitioning a federal court to convene a grand jury and determine if MacDonald could be charged. They were successful, and a grand jury indicted MacDonald for murder the following year. 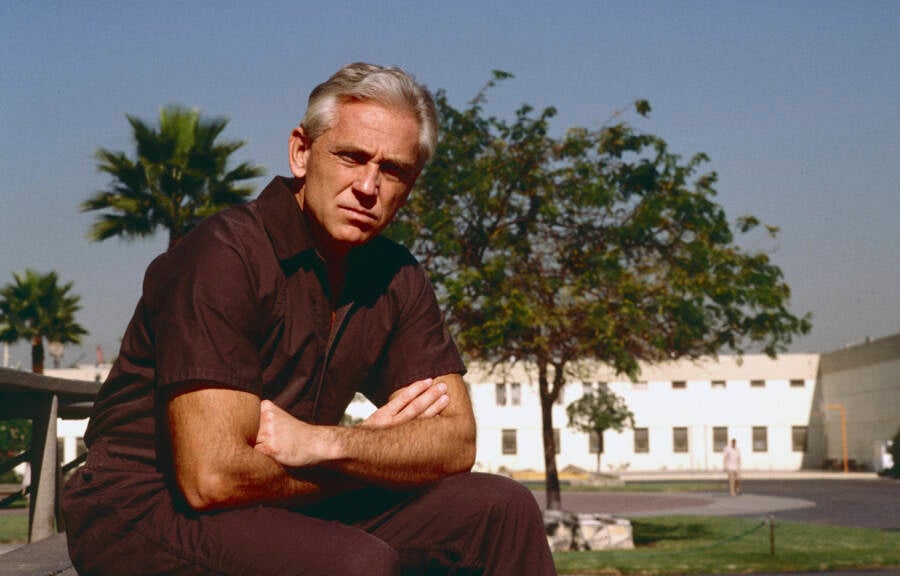 Bob Riha Jr./Getty ImagesMacDonald at Los Angeles’ Terminal Island prison — where Charles Manson had spent much of his youth.

Jeffrey MacDonald was arraigned in May 1975 and pleaded not guilty. He also tried to get the case dismissed, claiming double jeopardy and starting an appeals process that would delay his trial for years.

In 1978, MacDonald’s case went to the Fourth Circuit Court of Appeals, who rejected it. He tried to take his case to the Supreme Court in 1979, but they declined to review the lower court’s decision.

Next, his trial in Raleigh, North Carolina presided over by Judge Franklin Dupree began on July 16, 1979. The prosecution, led by James Blackburn and Brian Murtagh, argued that MacDonald staged the crime scene to blame hippies. They introduced a 1970 issue of Esquire found in MacDonald’s house containing a detailed account of the Sharon Tate murders to suggest that he had created a copycat story based on the Manson family’s crimes.

Furthermore, an FBI lab technician reenacted how MacDonald claimed he defended against the intruders’ attacks — and proved his testimony contradicted the evidence. Most notably, the holes in the shirt MacDonald had been wearing appeared too smooth and clear cut to indicate self-defense. Additionally, MacDonald’s medical records showed that he had no defensive wounds on his arms or hands consistent with the alleged attack.

Next, the defense decided to call the suspected blonde woman Helena Stoeckley as a witness. They hoped to get a confession, but she stated firmly that she had never been inside MacDonald’s home — contrary to previous claims she purportedly made to defense attorneys during witness hearings.

Other witnesses claimed that Stoeckly had confessed at various times that she thought she might have been present during the murders. She allegedly told one person that she recalled holding a candle that dripped with blood. Unfortunately for MacDonald, she would never admit any memory of her involvement in the killings in court.

In the end, MacDonald himself took the stand. He adamantly denied all charges but was at a loss for words during cross-examination by the prosecution. Despite a lack of motive and no history of violence, MacDonald was convicted of the second-degree murders of Colette and Kimberly, and the first-degree murder of Kristen.

He was found guilty and given three life sentences on Aug. 26, 1979. But even though Jeffrey MacDonald has spent decades behind bars, his case doesn’t seem to be closed just yet.

MacDonald invited author Joe McGinniss to write a book about the case before it had reached a verdict. The writer had full access to the trial, and appeared sympathetic. However, instead of the firm defense MacDonald expected, the 1983 bestseller A Fatal Vision described him as “a narcissistic psychopath.”

MacDonald sued McGinniss for fraud in 1987, with a mistrial leading them to settle out of court for $325,000. Then, in 2012 Jeffrey MacDonald’s most famous defender, filmmaker Errol Morris, was so intrigued by the case that he wrote the 500-page book A Wilderness of Error.

Official trailer for FX documentary series A Wilderness of Error.

Since adapted into a documentary series of the same name directed by Marc Smirling, the project aims to detail how much evidence Morris believes was lost, mismanaged — or glaringly unreliable from the start.

However, critics of the book say that while it paints an emotional picture of a man wrongfully tried by the media, it cherrypicks evidence and largely ignores the physical evidence that led to MacDonald’s 1979 conviction. Additionally, much of what Morris introduces as new evidence was already including in the trial that convicted MacDonald.

But of the evidence that Morris presents, perhaps most convincing is the piece cited in MacDonald’s 2017 federal appeal.

Not only were three hairs discovered at the crime scene that didn’t match any of the family’s DNA, but an affidavit revealed that Blackburn had allegedly threatened Stoeckley not to tell the truth in court.

While none of the hairs found at the scene matched Stoeckley’s DNA or that of any of her known associates, MacDonald maintains they prove something more essential to his freedom — that someone else was there that night.

After learning about the case of convicted killer and U.S. Army surgeon Jeffrey MacDonald, read about John List, who killed his family in cold blood and then disappeared for 18 years. Then, meet Christopher Scarver — the man who killed cannibal Jeffrey Dahmer.