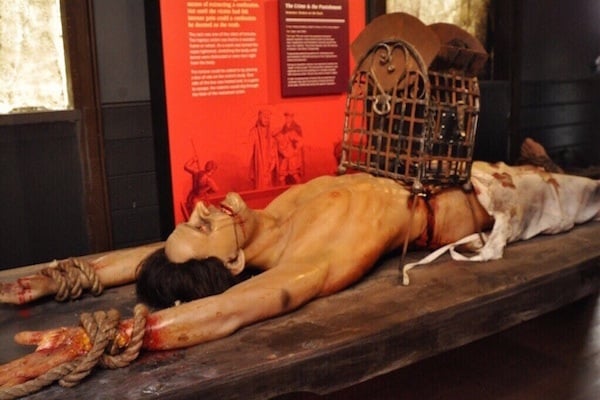 As recently depicted in Game Of Thrones, rat torture is a method ingenious in its disgusting simplicity. In its most basic form, a bucket containing live rats is placed on the exposed torso of the victim, and heat applied to the base of the bucket.

The rats, crazy with fear from the heat, tear and gnaw their way into the abdomen of the victim, clawing and ripping through skin, flesh, organs, and intestines in their quest to escape.

Possessing the most powerful biting and chewing motion of any rodent, rats are able to make short work of a human stomach. Along with the unimaginable pain, the victim would also suffer the sick horror of feeling the large, filthy creatures writhing around inside their guts as they died.

While associated with Elizabethan England — where the Tower of London was said to have housed a “Dungeon of Rats,” a pitch black room below high water mark that would draw in rats from the River Thames to torment the room’s inhabitants — the practice has been used far more recently.

General Pinochet is said to have employed the technique during his dictatorship of Chile (1973-1990), while reports from Argentina during the National Reorganization Process in the late 1970s and early ’80s claimed victims were subjected to a version in which live rats — or sometimes spiders — were inserted into the subject’s body via a tube in the rectum or vagina.