Lewis Anthony Rath, 52, and Jerry Chris Van Dyke, 67, have both been charged with misrepresentation of Indian-produced goods. 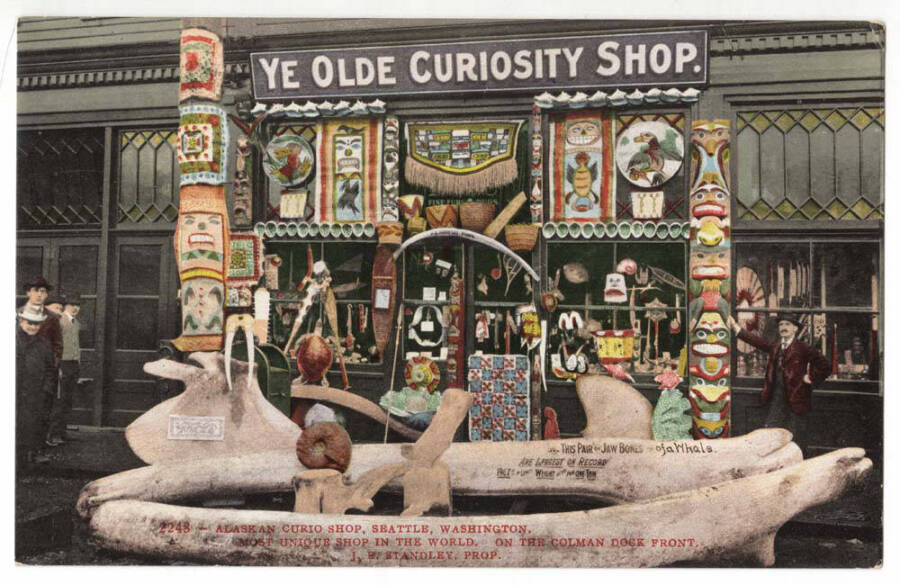 Wikimedia CommonsOne of the artists sold their wares at Ye Olde Curiosity Shop, which opened in Seattle in 1899.

The city of Seattle has a rich indigenous history. Even its name is an homage to Chief Sealth. But two local artists allegedly took advantage of this fact by faking Native American heritage to sell art. Now they’re facing charges.

According to the U.S. Attorney’s Office, both Lewis Anthony Rath and Jerry Chris Van Dyke fraudulently claimed membership in Native American tribes. Rath claimed to be a member of the San Carlos Apache Tribe; Van Dyke said he belonged to the Nez Perce Tribe.

Both men have been charged with violating the Indian Arts and Crafts Act, which forbids artists from misrepresenting their heritage to sell Native American goods.

Specifically, the law states: “It is illegal to offer or display for sale, or sell, any art or craft product in a manner that falsely suggests it is Indian produced, an Indian product, or the product of a particular Indian or Indian tribe or Indian arts and crafts organization, resident within the US.”

“By flooding the market with counterfeit Native American art and craftwork, these crimes cheat the consumer, undermine the economic livelihood of Native American artists, and impairs Indian culture,” said Edward Grace, Assistant Director of the U.S. Fish and Wildlife Service Office of Law Enforcement in a statement.

“We thank the Indian Arts and Crafts Board and the U.S. Department of Justice for their assistance with these investigations.”

The investigation into Rath and Van Dyke — charged separately — began in 2019. Then, the Indian Arts and Crafts Board received a complaint about both men. Undercover agents found that Rath and Van Dyke sold Native American artwork in Seattle galleries but that neither had official tribal affiliation.

Van Dyke, who has sold more than $1,000 in pendants he said were based on Aleut masks, even admitted to investigators that he had no tribal membership.

This came as a surprise to the gallery owners. An employee at Ye Olde Curiosity Shop explained to federal investigators that she wrote Rath’s biography, including details about his heritage, based on details he provided.

And Matthew Steinbrueck, the owner of Raven’s Nest Treasure, said that he took Van Dyke at his word when the artist told him about his Native American heritage.

“I’ve been doing this on good faith for many years — for more than 30 years,” Steinbrueck said, adding that his father had brought him up to appreciate and admire Native Americans.

Van Dyke, however, told investigators that he’d only claimed Native American heritage because Steinbrueck told him to do so. Steinbrueck denies this.

Regardless of whose idea it was, the artists’ alleged fraud has shone a spotlight on the risk of inauthentic Native American art. And Gabriel Galanda, an Indigenous rights attorney in Seattle and a member of the Round Valley Tribes, says that gallery owners need to do better.

“There has to be some diligence done by these galleries,” Galanda said. He noted that gallery owners can take steps like asking to see tribal enrollment cards or federal certificates of Indian blood instead of simply taking artists at their word.