Your Body Under The Microscope 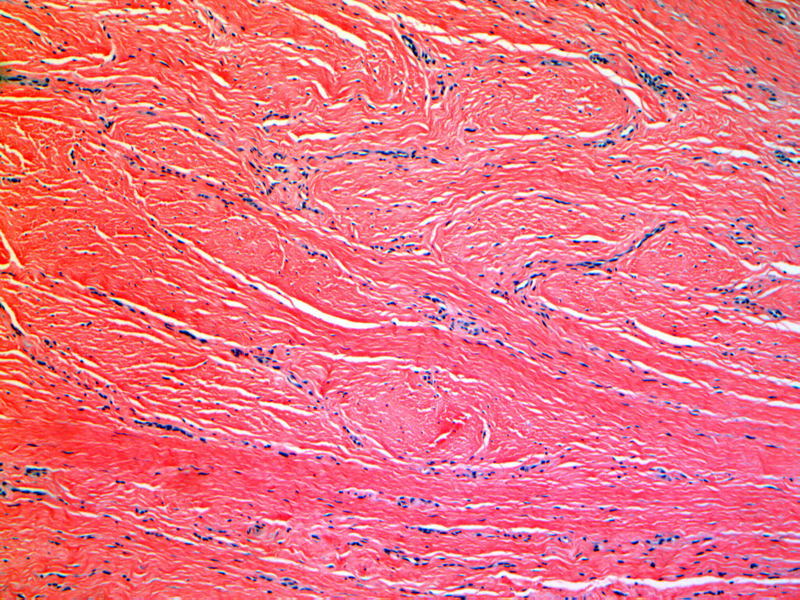 When Dutch spectacle-maker Zacharias Janssen invented the microscope at the end of the 16th century, he had no idea that he was opening the door to a brand new, tiny–and yet seemingly infinite–world. Since then we have been able to study this microcosm that has provided us with insight into virtually every scientific field ever devised: physics, chemistry, biology, medicine, and a host of others.

Over the centuries the technology behind microscopes has improved to an almost unimaginable degree. We were once able to see objects almost invisible to the naked eye, while now the most powerful microscopes can show us nano-objects a billionth of an inch in size. Even our own bodies become realms of fantastically intricate wonder when viewed through a microscopic lens. 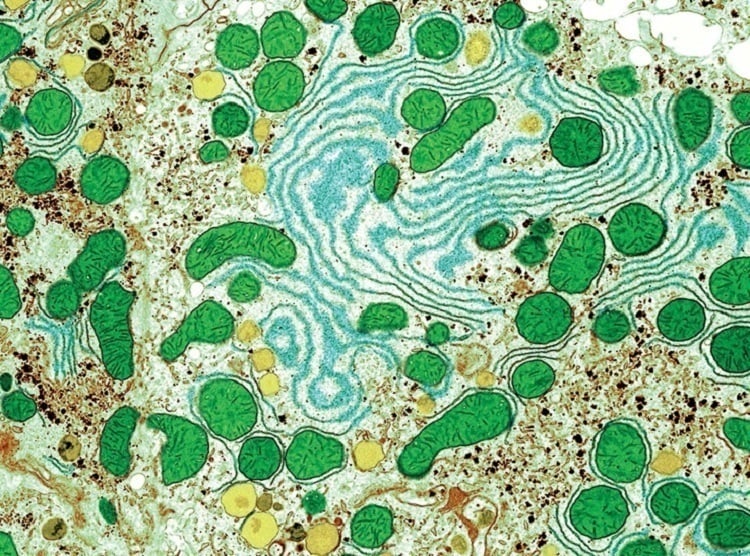 Although this might look like a child’s painting, it is actually a colored micrograph scan of a liver cell.The liver cell (hepatocyte) is very complex and contains different elements with specialized roles. Source: Discover Magazine 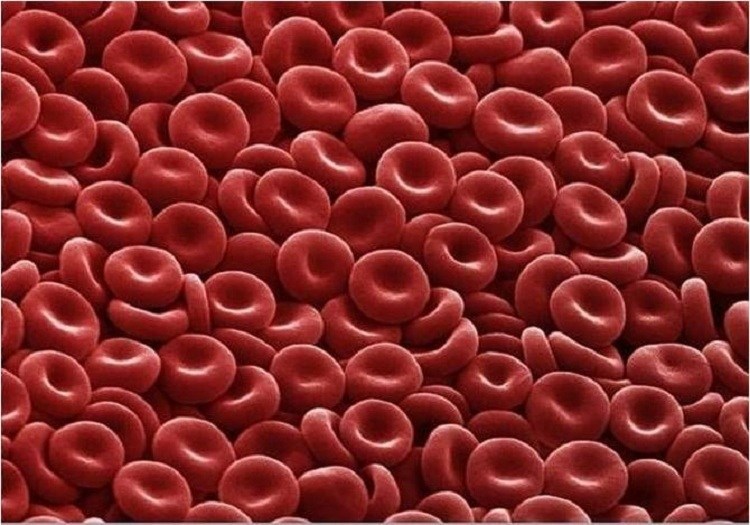 These little guys might look like candy or cereal, but they’re actually red blood cells, also known as erythrocytes. They make up most of your blood and carry oxygen throughout your body. Source: Tumblr 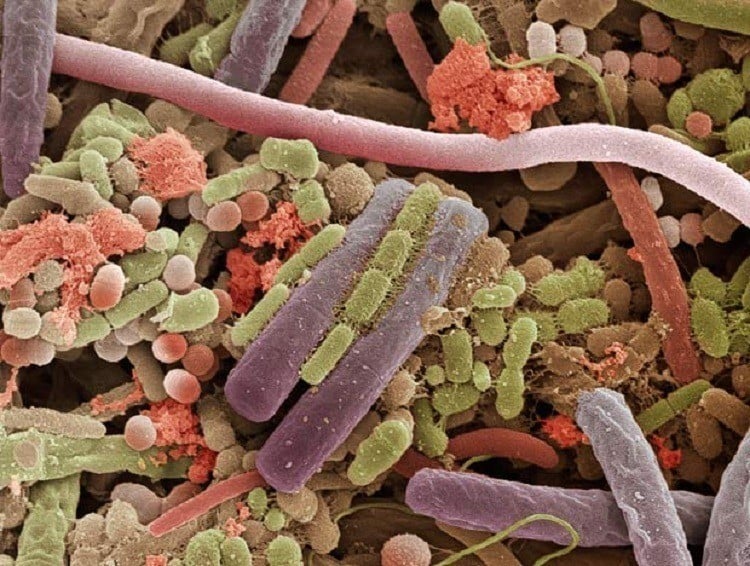 As you might know, your body is covered in bacteria. Although most bacteria is harmless to humans, that doesn’t make the idea any more pleasant. Here is an up-close image of the bacteria lounging around on your tongue right now. Source: The Telegraph 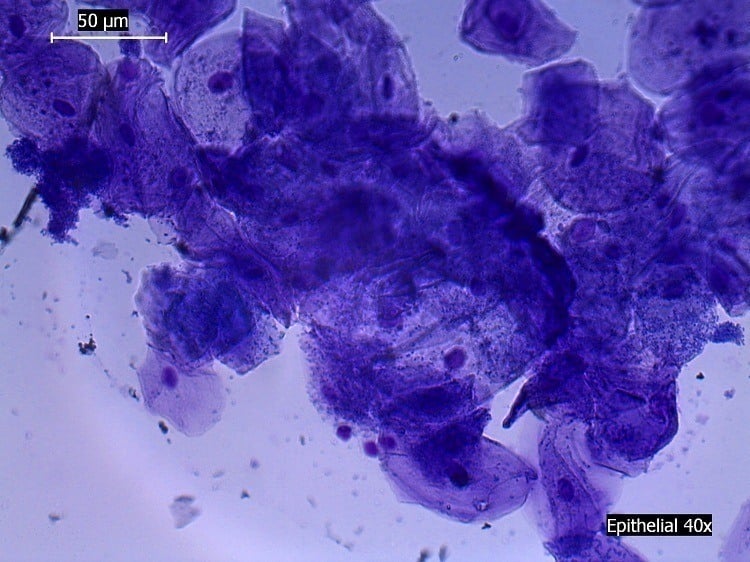 Epithelial cells are among the four basic types of cells that form animal tissue along with nervous, muscle and connective tissue. They usually line the surfaces and cavities of most body structures (in this case, the mouth). Source: Wikimedia 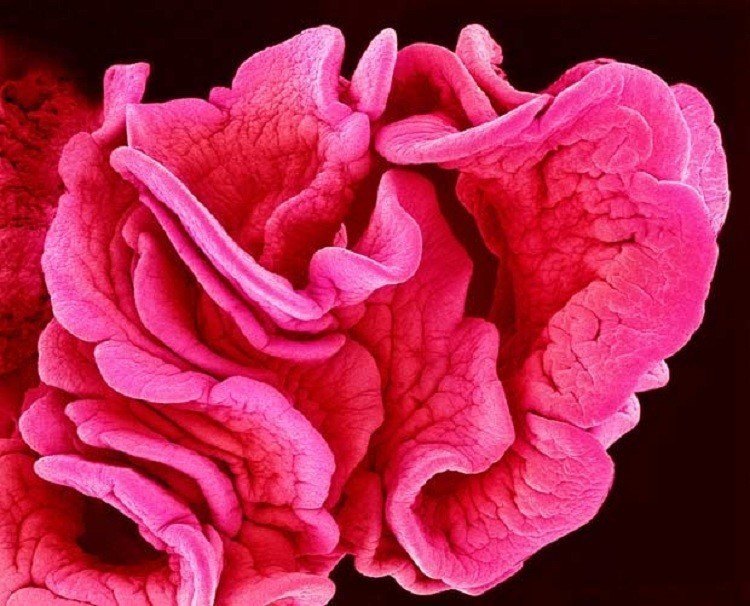 The end of a Fallopian tube, which is found in all female mammals. Source: The Telegraph 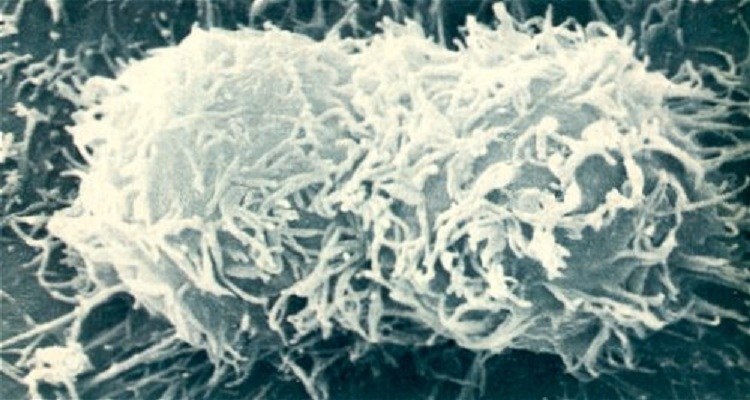 his image shows a human cell in the process of mitosis or cell reproduction. The chromosomes start pairing up and grouping into two different nuclei. Source: UH 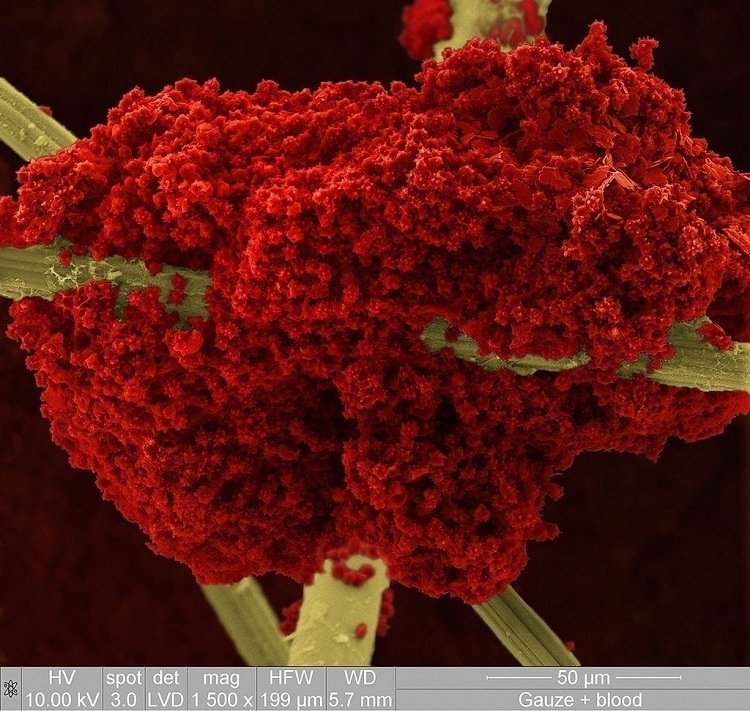 Here are those same red blood cells after they have clotted and dried on a piece of gauze wound dressing. Source: National Geographic 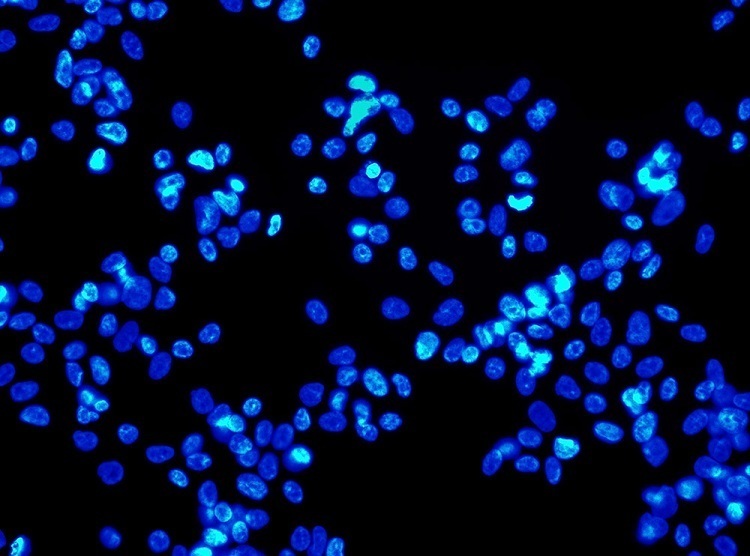 A microscope image of human stem cells. These are pluripotent stem cells, meaning that they can become every other type of cell. Source: Society For Science 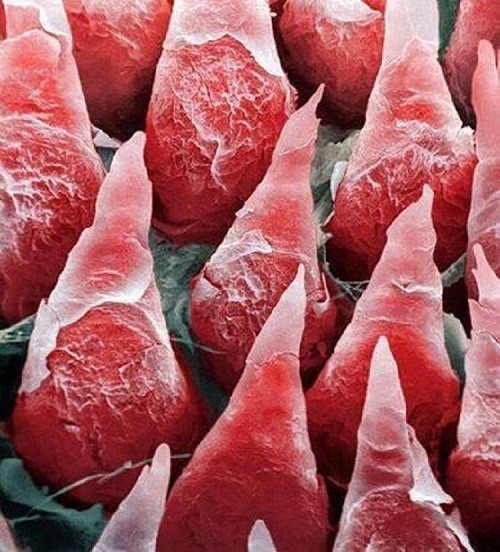 This is a human tongue under a microscope, and each one of those pointy things is a taste bud. A human tongue can have anywhere between 2,000 and 8,000 taste buds. Sorry to ruin the fun, but while we’re on the subject, it’s a myth that the tongue is split into regions where each one is responsible for a particular taste. In fact, each part is capable of detecting all five known elements: sweet, sour, salty, bitter and umami. Source: Reddit 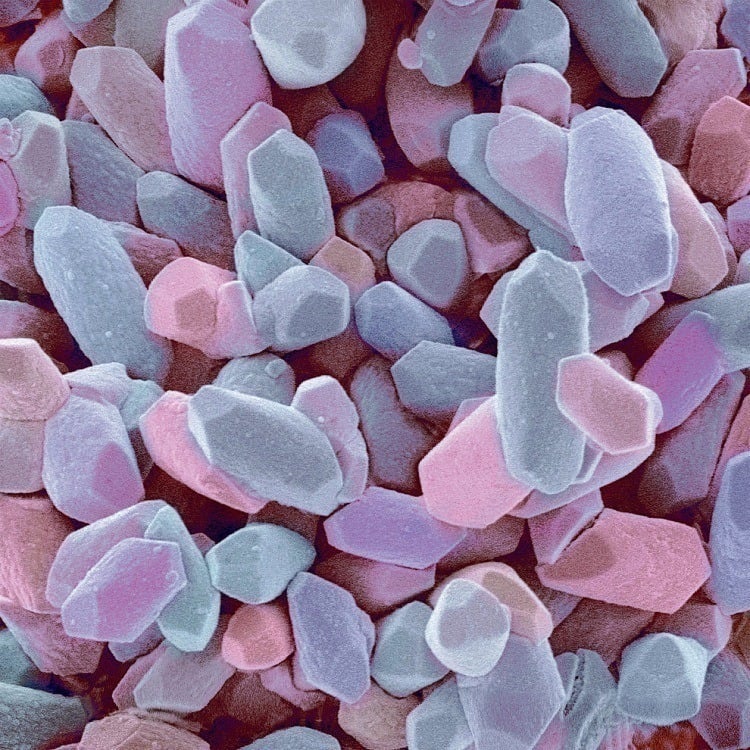 You can call these stones or crystals, if you like, but you’ll never guess where they come from: your inner ear. About a thousand of these ear rocks are located in the utricle, which is itself part of the vestibular system of your inner ear. They are mainly responsible for your sensation of up and down and, thus, essential to your sense of balance. Source: Pharmacypedia 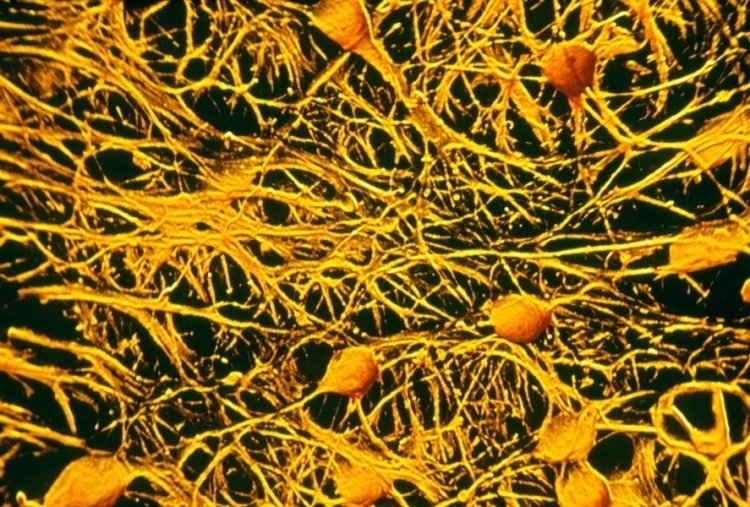 That jumbled mess represents all of your collective knowledge and memories. It is a microscopic look at your brain cells in action. Source: Discover Magazine 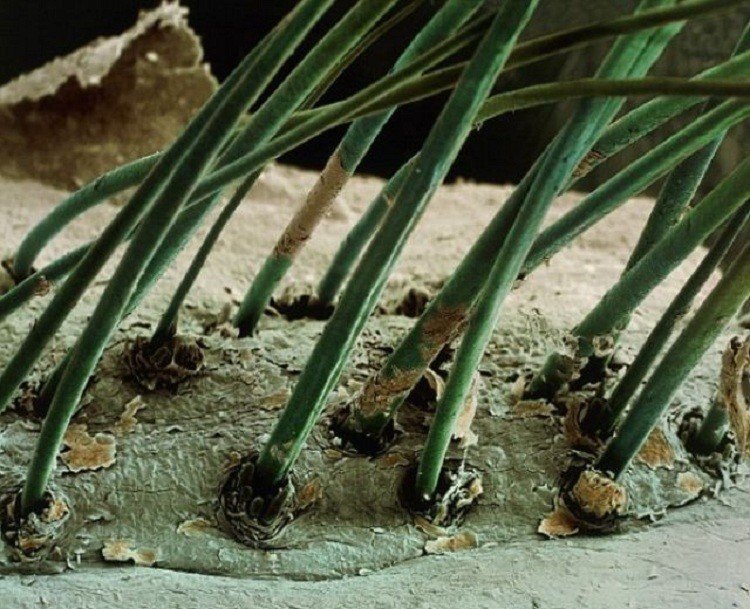 An eyelash up-close. Being hair, eyelashes should strictly be a mammalian trait, but other animals didn’t get the memo. Many species of hornbills have lashes made out of feathers. Source: Viral Nova 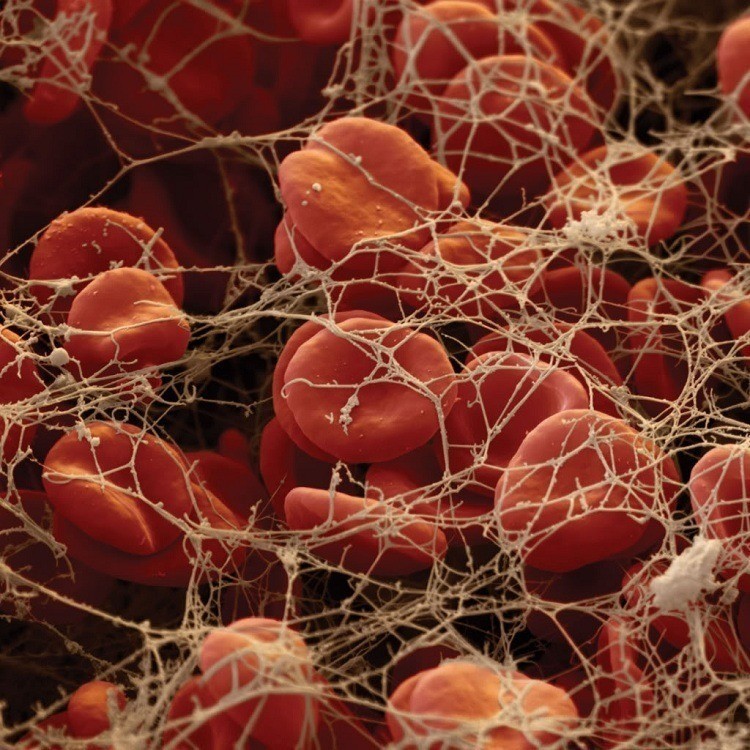 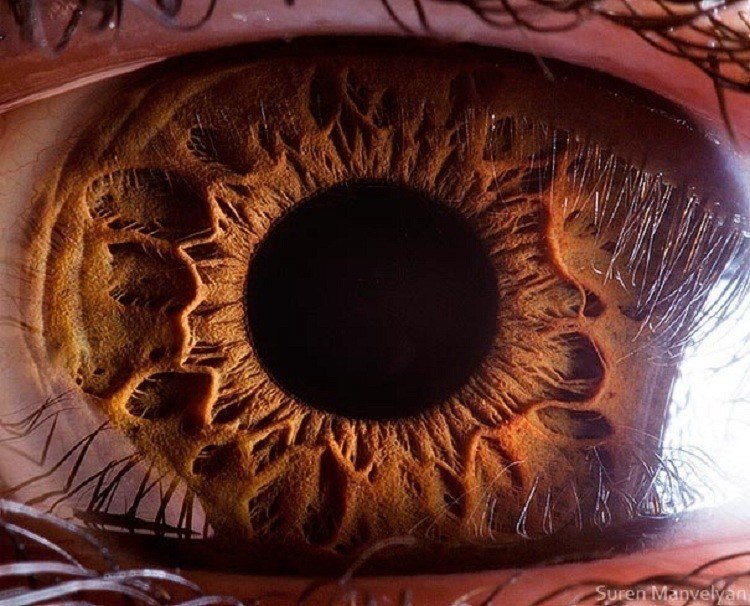 If you ever thought the human eye was beautiful, you might want to reconsider. Source: Bored Panda 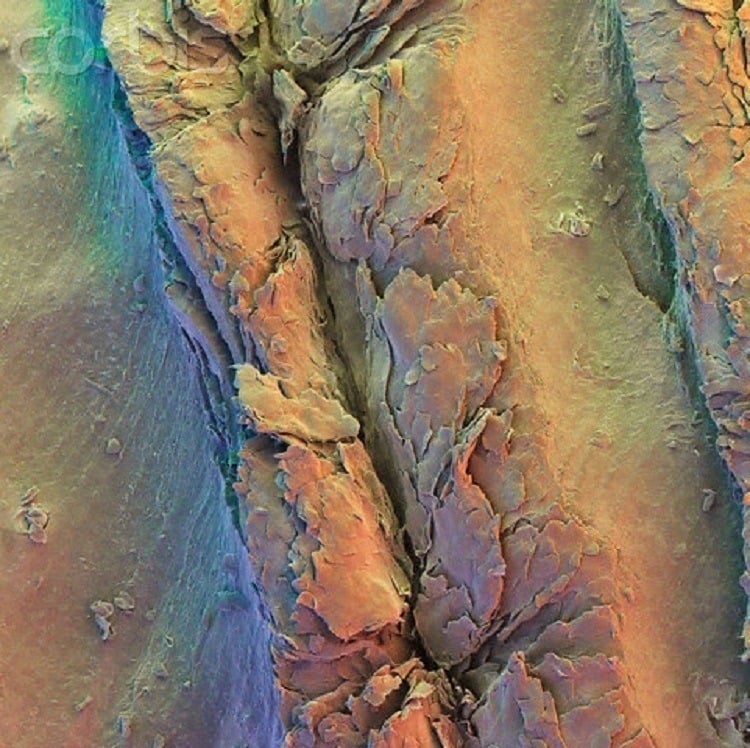 These are the ridges on a finger that form fingerprints. Other primates also have unique fingerprints like we do and, bizarrely, so do koalas. In fact, koala fingerprints are so similar to ours that it takes an expert using an electron microscope to tell the difference. Source: Ebaum's World 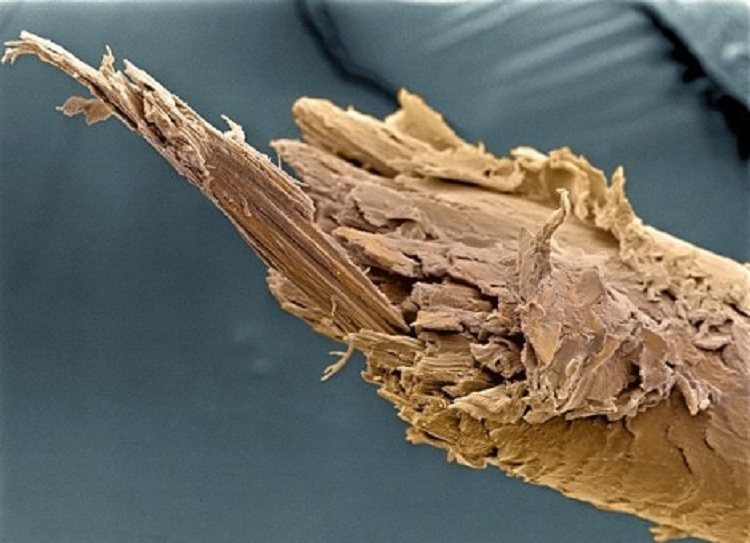 The start to a bad hair day – the split end of a human hair. Our hair is primarily made out of a protein called keratin, which is also a key component in our skin and nails. In other animals, keratin is also responsible for hooves, scales, claws and horns. Source: Viral Nova 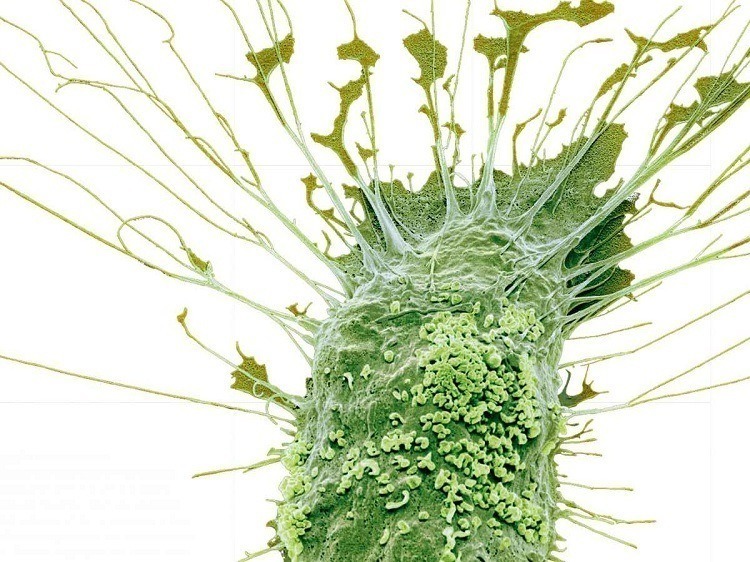 White blood cells or leukocytes only make up around one percent of your total volume of blood. However, they represent your frontline infantry in the war against all foreign invaders, which makes them essential to your good health. In fact, low white cell counts are often indicative of disease. Source: Pop Science 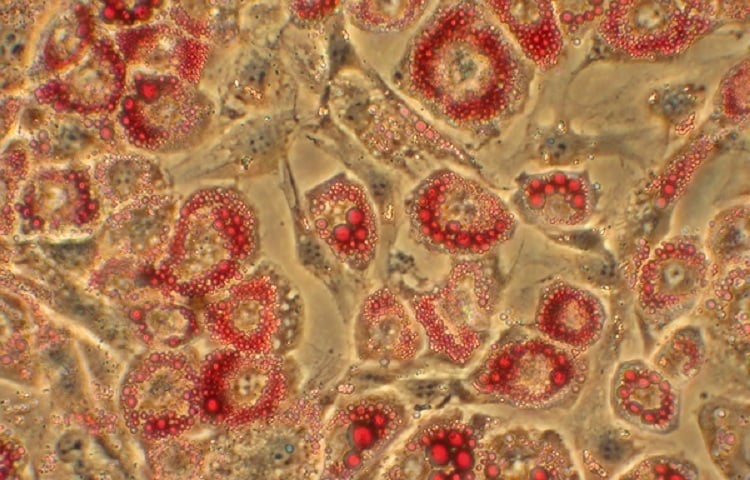 Here we see fat cells under a microscope. They are among the largest cells in our bodies (as many of us are painfully aware). The red stuff we see is lipids stored within the membrane of each individual cell, ready for use when needed. Source: University Of California, San Francisco 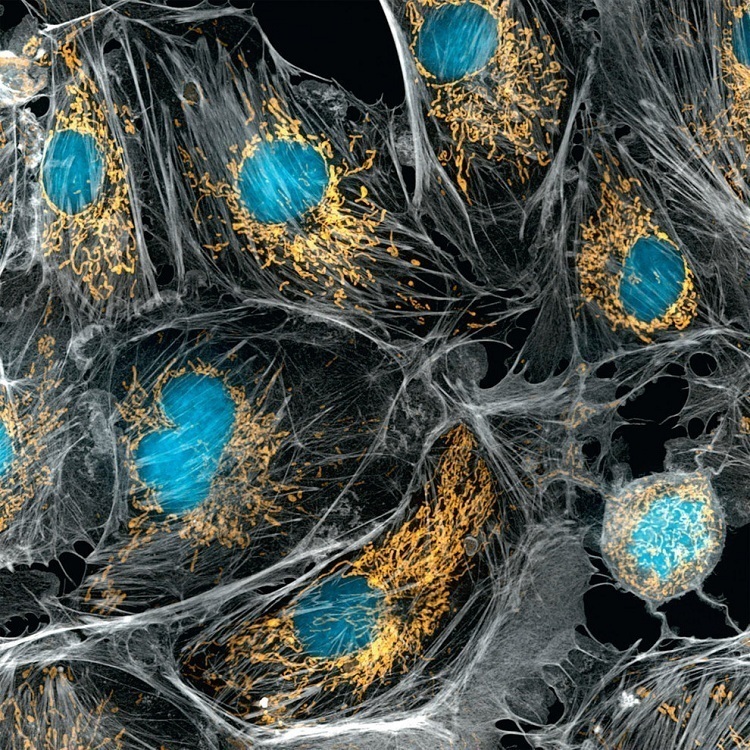 In this image of lung cells, the blue centers are nuclei and they are surrounded by yellow mitochondria, organelles that do most of the heavy lifting in many eukaryotic cells. Source: Buzzfeed 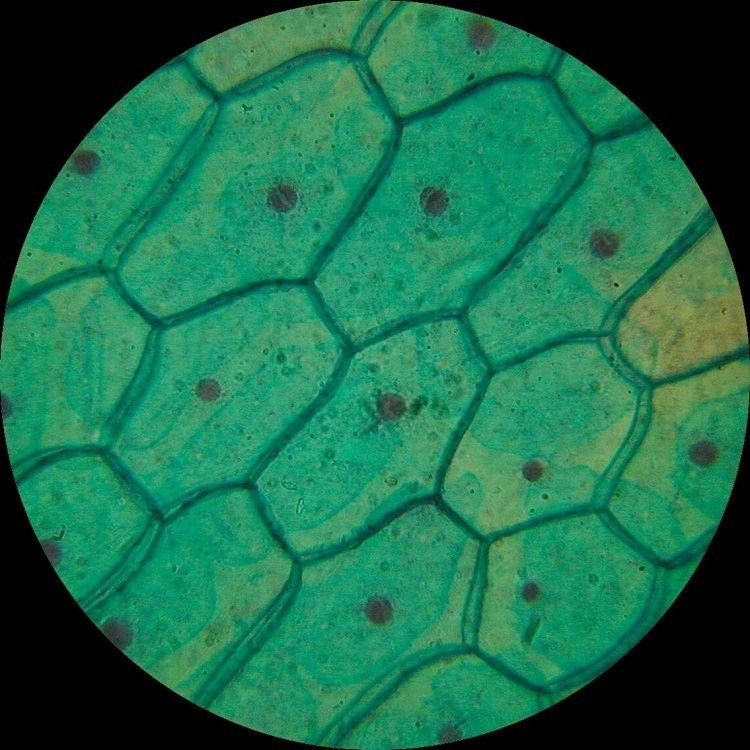 As we already know, cells make up every living thing. Here we see a basic eukaryotic (nucleus bound by membrane) cell – a human skin cell. Presuming you are an average-sized human, you have about 1.6 trillion skin cells right now, but you will lose about a million of them by the end of the day. No worries, though. They are constantly being replaced with new cells. Source: Pix Good 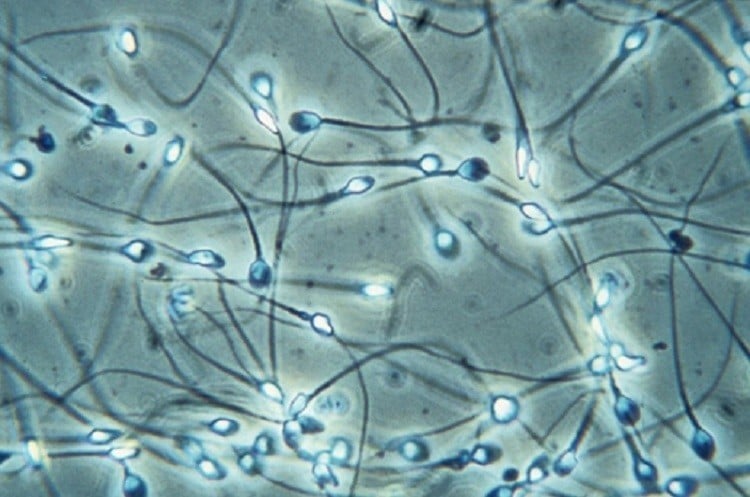 No prizes for guessing what these little swimmers are. Source: Pix Shark 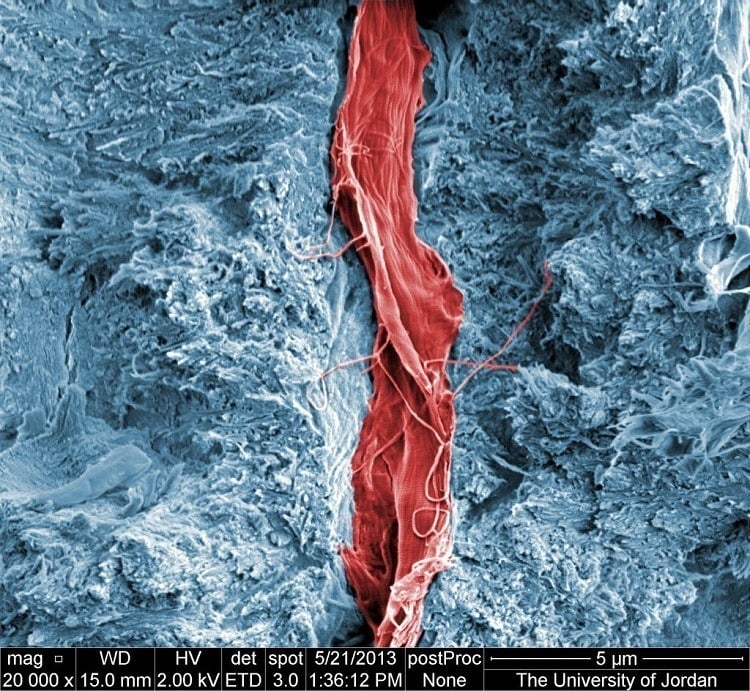 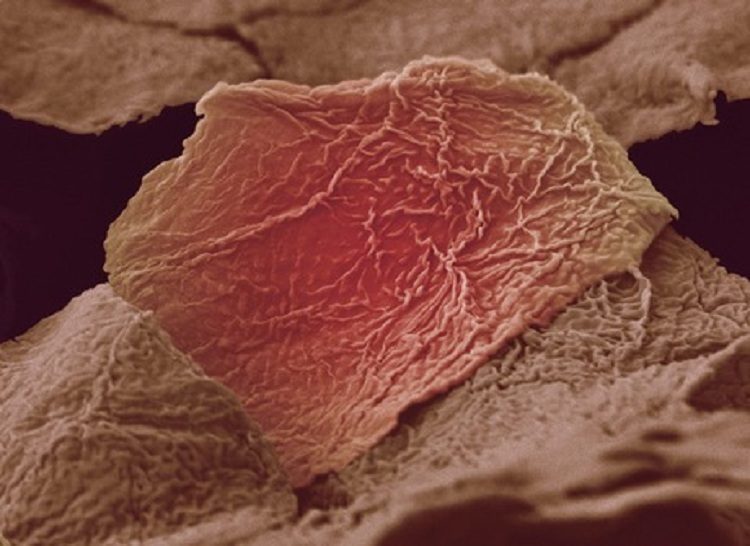 Here is what happens when you stay out in the sun too long – a skin blister. Source: Ebaum's World 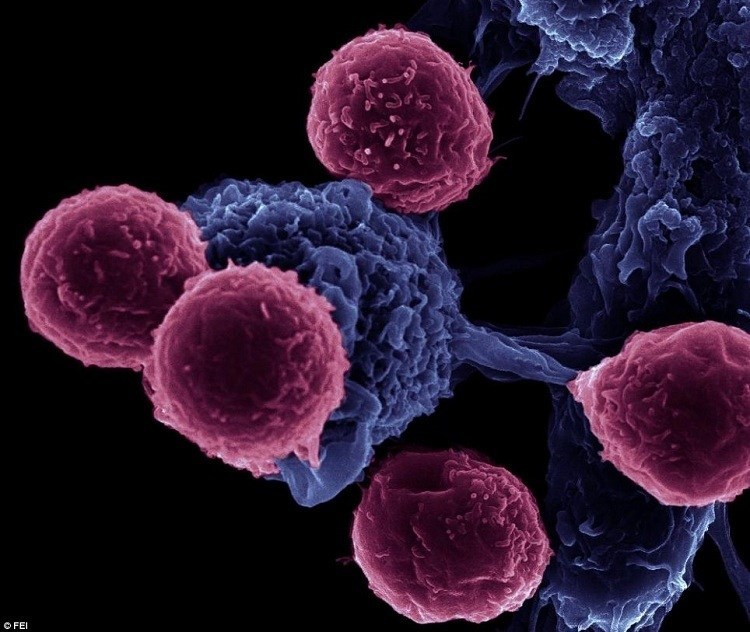 Dendritic cells are part of your immune system. They are found in all tissues that come into contact with elements from the outside world – mostly skin, but also the inner linings of the stomach, nose and lungs. Source: Pix Shark 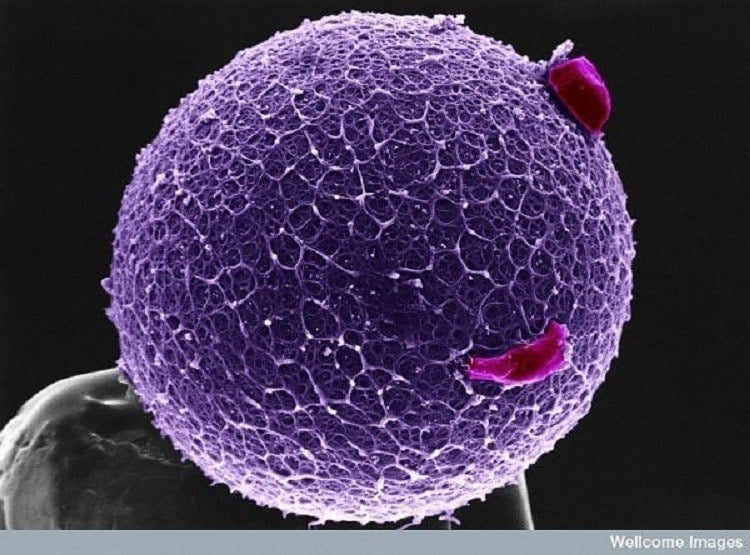 This is a human egg resting on a pinhead. The honeycomb shape of the outside layer (called zona pellucida) is meant to bind spermatozoa. Source: CDIN