The baby mammoth, dubbed Nun cho ga, likely died more than 35,000 years ago, but she's so well-preserved that scientists can see what she ate for her last meal. 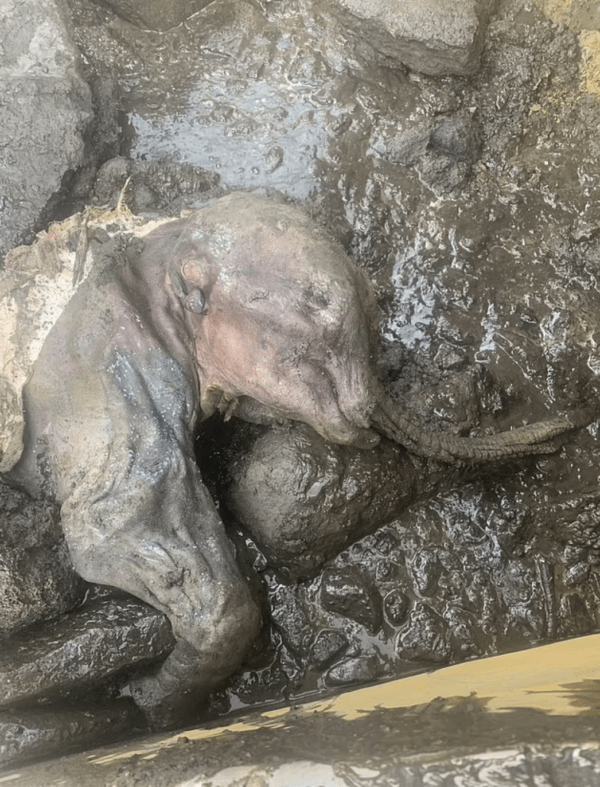 Government of YukonA miner stumbled upon the baby mammoth while digging for gold in the Klondike.

When a gold miner working in the Klondike region of Canada’s Yukon territory struck something with his bulldozer on June 21, 2022, he called his boss over to check it out. There in the mud along Eureka Creek, they spotted a perfectly-preserved baby mammoth.

Brian McCaughan, general manager at Treadstone Mining, quickly put a stop to the operation and called in the experts. When scientists arrived, they were stunned by the scene in front of them. The mammoth, who is believed to be a female, is the most complete specimen ever found in North America and only the second discovery of its kind in the world.

Paleontologist Grant Zazula told CBC, “I don’t know how to process it all right now, to be honest with you. It’s amazing.”

As the woolly mammoth was unearthed on land belonging to the Tr’ondëk Hwëch’in First Nation, members of the group were called in to assist with the find. Elders named her Nun cho ga, which means “big baby animal” in the local Hän language.

While mammoths walked the Earth as recently as 4,000 years ago, experts have determined that Nun cho ga likely died 35,000 to 40,000 years ago, during the last Ice Age. Then, mammoths, wild horses, cave lions, and giant steppe buffalo roamed Canada, according to a press release from the Yukon government.

For Zazula, the discovery of Nun cho ga is a dream come true. “As a paleontologist, it has been one of my life long dreams to come face to face with a real woolly mammoth,” he said. “She has a trunk. She has a tail. She has tiny little ears. She has the little prehensile end of the trunk where she could use it to grab grass.”

Dan Shugar, an Earth scientist at the University of Calgary who helped with the recovery of Nun cho ga, was also astonished by the level of preservation. Since the mammoth was entombed in permafrost, every part of her body was mummified. “Being part of the recovery of Nun cho ga … was the most exciting scientific thing I have ever been part of, bar none,” Shugar wrote on Twitter.

“The most incredible thing about Nun cho ga is the preservation,” he continued. “Toe nails, hide intact, hair, trunk, intestines …”

In fact, Nun cho ga is so well-preserved that the grass she ate for her last meal is still visible in her digestive tract, according to CBC. “So that’s telling us what she did in her last moments of life,” explained Zazula.

The paleontologist believes that Nun cho ga was likely just 30 to 35 days old when she ventured off and got stuck in mud while grazing near her mother. “And that event, from getting trapped in the mud to burial, was very, very quick,” Zazula said.

Nun cho ga is just under five feet long — about the same size as the only other fully-intact woolly mammoth ever discovered. In 2007, 42,000-year-old “Lyuba” was unearthed in Siberia. She also died when she was a month old, and she is currently on display at the Shemanovskiy Museum and Exhibition Center in Salekhard, Russia. 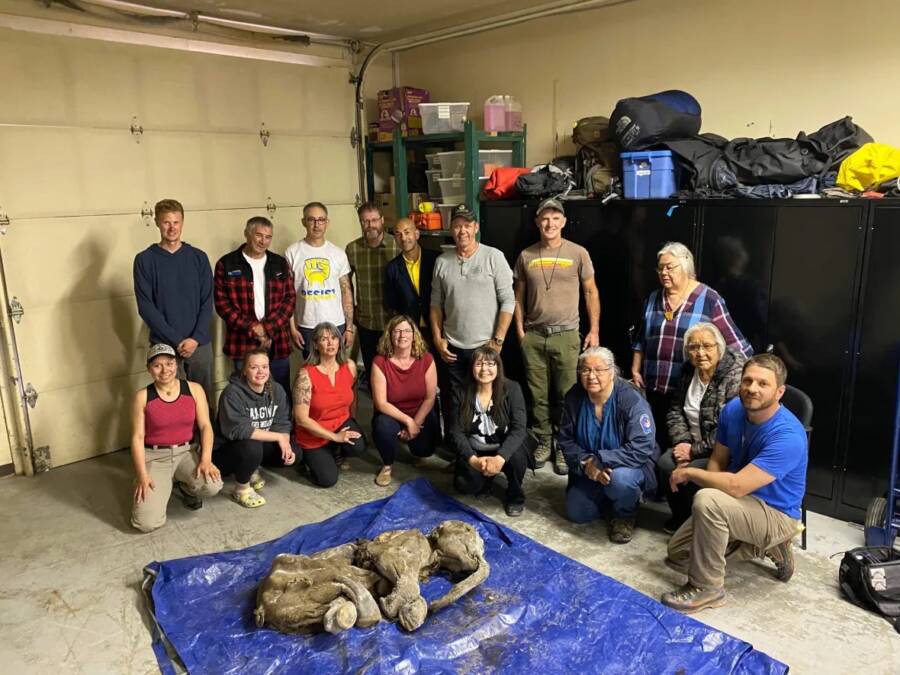 At the moment, scientists are working with the Tr’ondëk Hwëch’in people to determine the next steps for Nun cho ga. Chief Roberta Johnson said, “This is a remarkable recovery for our First Nation, and we look forward to collaborating with the Yukon government on the next steps in the process for moving forward with these remains in a way that honors our traditions, culture, and laws.”

“We are committed to respectfully handling Nun cho ga as she has chosen now to reveal herself to all of us,” Johnson continued.

Immediately after recovering Nun cho ga from the ground, Tr’ondëk Hwëch’in elders led a ceremony attended by miners, scientists, and local politicians. The participants gathered in a circle and prayed as elders revealed the baby mammoth from the tarp she was wrapped in and blessed her.

“It’s amazing,” said Elder Peggy Kormendy. “It took my breath away when they removed the tarp. We must all treat it with respect.”

Awe seems to be a shared feeling amongst everyone involved in the discovery. As McCaughan told CBC, “There will be one thing that stands out in a person’s entire life and I can guarantee you this is my one thing.”

After reading about the discovery of Nun cho ga, the most well-preserved woolly mammoth ever found in North America, learn how Yukon gold miners stumbled upon a trove of mammoth bones. Then, find out when the woolly mammoth actually went extinct.

Cara Johnson
A writer and editor based in Charleston, South Carolina, Cara Johnson holds a B.A. from Washington & Lee University and an M.A. from College of Charleston and has written for publications ranging from wedding magazines to coffee blogs.
You might also like
Remove Ads
×
Follow ati On
Join The All That's Interesting Weekly Dispatch
Like Follow
Posting....