When the creation of a new reservoir in 1992 forced residents of Aceredo to evacuate, they thought they would never see their homes again. Now, due to a major drought, they can. 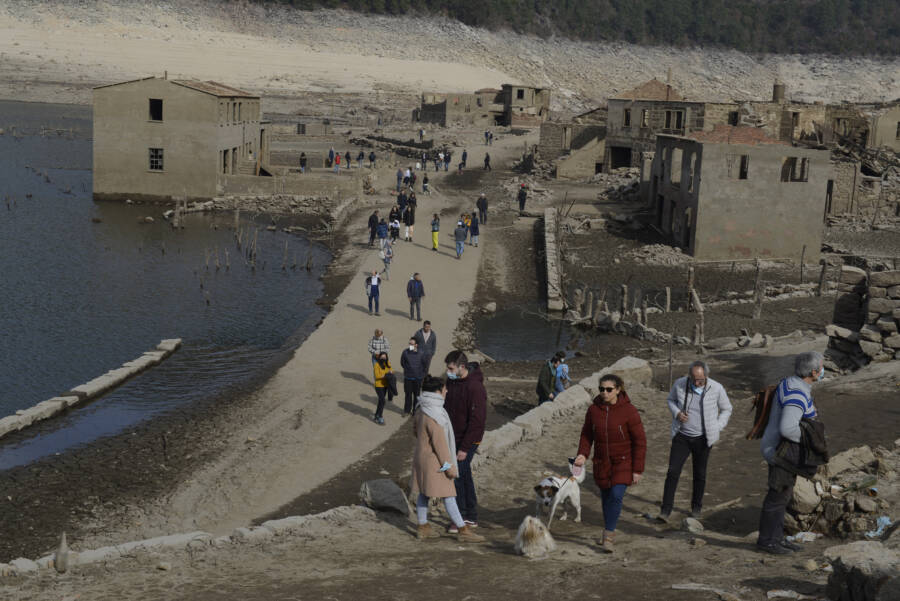 Rosa Veiga/Europa Press via Getty ImagesTourists are flocking to Aceredo to explore the ruins that have been underwater for 30 years.

In 1992, residents of Aceredo, a small village on the border of Spain and Portugal, watched as the Limia River rose, overflowing its banks and submerging their town. This was no typical flood, though. The area needed a new reservoir, and Aceredo was sacrificed to make way for it. Now, the ghost town is re-emerging after 30 years underwater.

During a typical dry season, a few rooftops may peek out as water levels sink. However, the reservoir rarely becomes low enough to reveal this much. Now, after months of historic drought in the region, nearly the entire village is on dry ground. The reservoir is at only 15 percent of its capacity.

María del Carmen Yañez, the mayor of the larger Lobios council, which includes Aceredo, explains the reservoir is so low due to a drought brought on by climate change as well as “quite aggressive exploitation” by the Portugal power company that manages the reservoir.

But despite the circumstances that led to this re-emergence, tourists are coming in droves to explore the village — and there’s a lot to see. Roads, paths, and areas of previous farmland are visible, as are former homes and businesses. The stone structures remain, although most of the roofs have collapsed, and the wooden doors and windows are rotten. 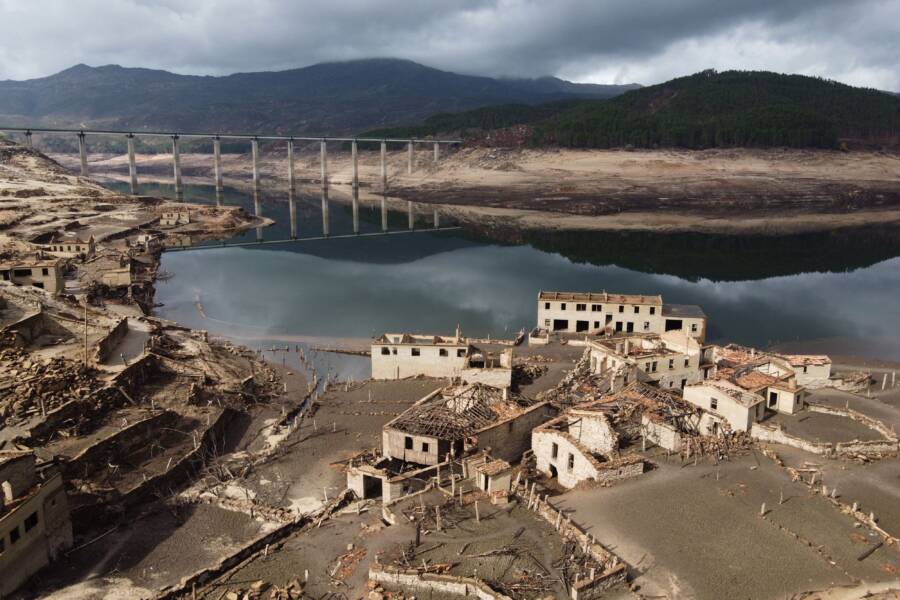 Carmelo Alen/AFP via Getty ImagesThe Spanish village of Aceredo was originally flooded in 1992 to make room for a reservoir.

Back in the early 1990s, Aceredo and four other villages in the Galicia region of Spain were flooded to make way for a reservoir. At the time, Aceredo alone held 70 houses and 120 citizens — all of whom were forced to evacuate in the days leading up to the reservoir’s construction.

But they did not go without a fight. There were complaints, protests, and even a 10-day hunger strike led by furious citizens.

At the time, Margarita de Brito was a resident of Buscalque, another village that was flooded during the creation of the reservoir. Despite the opposition, she says, “In the end the water came, the first day a little, the second a little more, and, on the third day, it rose and did not fall more.”

Not everything was lost, however. A historic church was moved to a different town, and families chose to relocate the bodies of their deceased loved ones who were buried in the village.

Additionally, as residents began gathering their belongings and planning their moves, they filmed the scenes around them. There’s no question that footage of life in Aceredo helped preserve the history of the ghost town. And in 2015, two filmmakers used the footage to put together a documentary called Os Días Afogados, which means “The Drowned Days.”

Still, the losses were great for the families who were forced to relocate. Many had lived in Aceredo for generations, never knowing another home. Some moved to nearby villages, while others left the area entirely to create new memories elsewhere. Now, former residents are getting another glimpse of the homes they thought they would never see again. 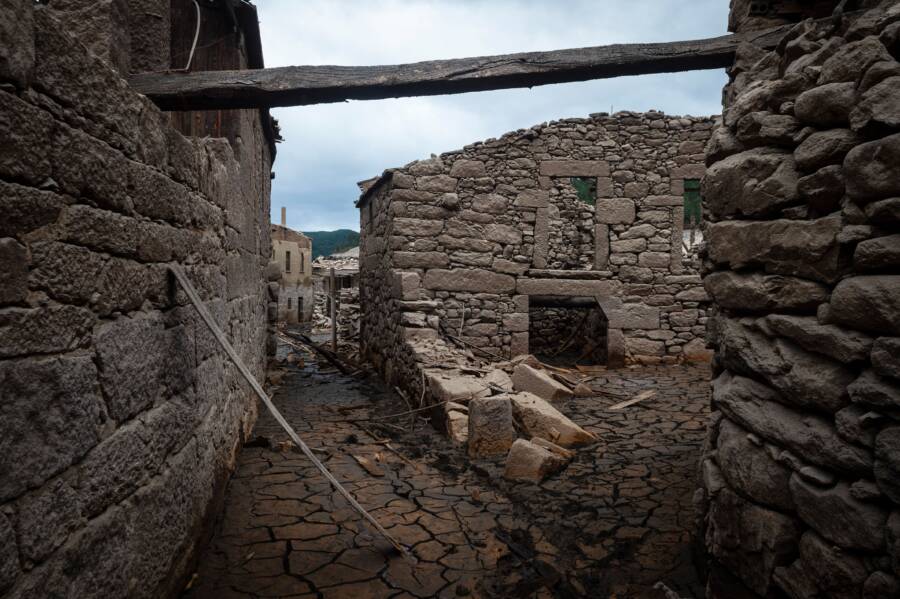 Images taken by a drone show how quickly residents had to leave all those years ago. Empty bottles still sit on tables, crates are stacked against walls, and a rusty old car sits where it was last parked. Even a crumbling fountain still spews a steady stream of water.

Maximino Pérez Romero, who traveled to Aceredo to see the spectacle, says, “It’s as if I’m watching a movie. I have a feeling of sadness. My feeling is that this is what will happen over the years due to drought and all that, with climate change.”

José Álvarez, a local bricklayer who did construction work in Aceredo in the past, stated, “It’s terrible, but it is what it is. That’s life.”

Francisco Villalonga, who witnessed the flooding firsthand, says of the sudden burst of tourism, “I can see this might be interesting for visitors from elsewhere, but for those of us whose roots are there it is hard to see it like this. Seeing the houses where they were born and raised has made people very nostalgic for the past. That is a very Galician thing.”

After reading about the ghost town of Aceredo re-emerging after 30 years underwater, check out the startlingly empty ghost cities of China. Then, take a look at some of the creepiest abandoned cities around the world.

Cara Johnson
A writer and editor based in Charleston, South Carolina, Cara Johnson holds a B.A. from Washington & Lee University and an M.A. from College of Charleston and has written for publications ranging from wedding magazines to coffee blogs.
You might also like
×
Follow hu On