Meet Adam Weishaupt, The German Philosopher Who Founded The Illuminati In 1776

While many are familiar with conspiracy theories claiming that the Illuminati had a hand in events like the French Revolution or the assassination of John F. Kennedy, few know the story of the organization's founder, Adam Weishaupt.

If conspiracy theorists are to be believed, then the Illuminati rule the world. They count celebrities like Jay-Z among their members, and they’ve orchestrated some of history’s key moments. Yet the truth about the group, and its founder, Adam Weishaupt, is less dramatic.

Weishaupt, a German law professor, had big dreams when he gathered a small group of students and created the Illuminati in 1776. A believer in the principles of the Enlightenment, he sought to create an organization that could act as a counterweight to religion.

For a while, it seemed to work. Weishaupt’s organization spread swiftly across Europe, and soon had hundreds — if not thousands — of members. But when secret societies were banned, Weishaupt’s Illuminati sputtered into nothing.

Today, Weishaupt’s organization is a ghost of itself kept alive by conspiracy theorists and novelists like Dan Brown. That is — if you believe the official story.

Who Is Adam Weishaupt? 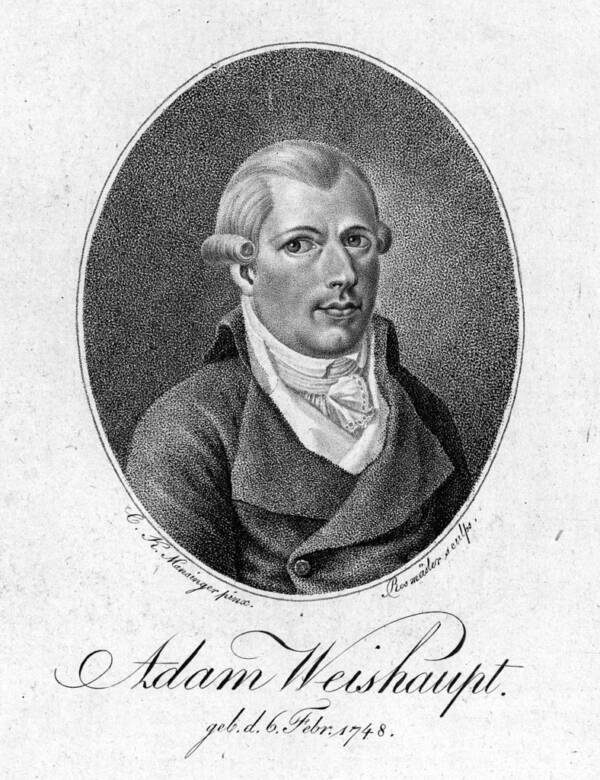 Public DomainAdam Weishaupt founded the Illuminati with the hopes that his secret society would spread Enlightenment principles across Europe.

Born on Feb. 6, 1748, Johann Adam Weishaupt grew up in Ingolstadt, Germany. According to Deutsche Biography, Weishaupt was a bright, ambitious child who applied himself eagerly at school.

Though little is known of his early life, Weishaupt seems to have become critical of organized religion at a young age. Disappointed with his Jesuit teachers, he instead drifted toward ideas that came out of the Age of Enlightenment.

This period of European history, which lasted from roughly the end of the 17th century to the beginning of the 19th, emphasized the virtue of reason. It pushed back against the status quo and encouraged change through rational thinking.

And Weishaupt, who became a law professor in Ingolstadt around 1772, began to think about how he could harness the ideas of the Enlightenment. Four years later, he decided to start his own society where Enlightenment ideals like liberty and toleration could be explored in depth.

On May 1, 1776, 28-year-old Adam Weishaupt gathered a handful of his best students and founded the Bund der Perfektibilisten, or Covenant of Perfectibility. According to Heritage Daily, the name of his organization was changed two years later to Illuminatenorden — the Order of Illuminati.

Weishaupt urged his followers to accept reason over religion. According to History Extra, he hoped that his Enlightenment philosophies would spread. He imagined that they’d profoundly change Europe by encouraging governments to make rational, and not religious, laws.

“Weishaupt was in many ways a revolutionary,” Michael Klarner, an Ingolstadt journalist, told the BBC. “He liked the idea of teaching people to be better human beings. He wanted to change society, he was dreaming of a better world, of a better government.”

But Weishaupt’s ideas were highly controversial during the conservative, religious time he lived in — so he and his fellow members used elaborate rituals to keep their activities secret.

For example, members of the Illuminati used aliases (Weishaupt went by “Brother Spartacus”). They took on the owl as a symbol, used ciphers, divided the organization into ranks like Novice, Minerval, and Illuminated Minerval, and according to Vox, distrusted anyone above the age of 30 (who they saw as too set in their ways). 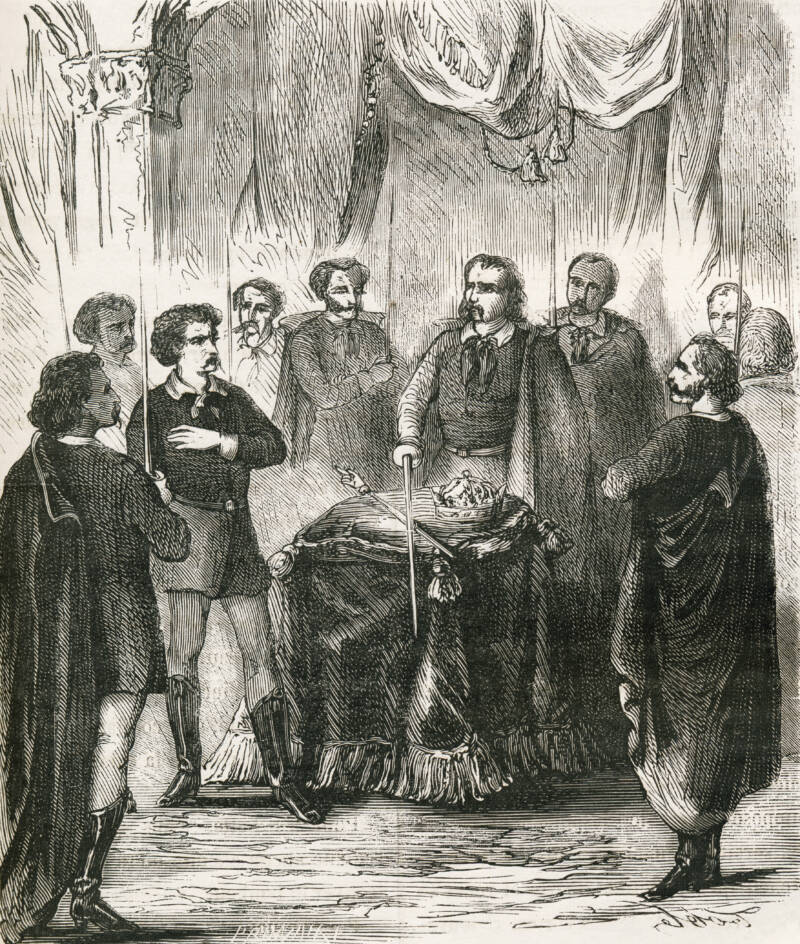 Meanwhile, they got to work spreading Weishaupt’s message. Illuminati members looked for rich, influential men to recruit — despite their enlightened principles, they did not accept women, Jews, pagans, or monks — in cities across Germany.

With the help of German diplomat Baron Adolf Franz Friedrich, Freiherr von Knigge, Weishaupt also reached out to Masonic lodges. Joining a lodge himself in 1777, he promoted the Illuminati as a form of “pure” masonry and emphasized its anti-religion, anti-government teachings.

It worked. Before long, Adam Weishaupt’s ideas had spread beyond Germany to places like France, Denmark, Italy, and Poland. According to the BBC, some 2,000 people signed up to become Illuminati members, including politicians and members of the aristocracy.

But in 1785, less than a decade after its founding, the Illuminati came to an abrupt end. Some of its members had criticized the monarchy a bit too loudly, according to History Daily, which led Duke of Bavaria Karl Theodor to ban secret societies in 1784. The next year, he singled out the Illuminati as a member of the already-banned Freemasons.

But his secret society crumbled into nothing, and Weishaupt himself died in 1830 at the age of 82. Thus, with little fanfare or recognition, the story of the Illuminati had come to a swift end — or had it?

Today, the Illuminati hold a peculiar place in popular culture. According to some, they’ve had a hand in some of the world’s most pivotal events, including the French Revolution, the assassination of John F. Kennedy, and even the 9/11 terror attacks.

One conspiracy theory even holds that Adam Weishaupt himself traveled to the United States in 1785, killed George Washington, and secretly replaced him until he died. 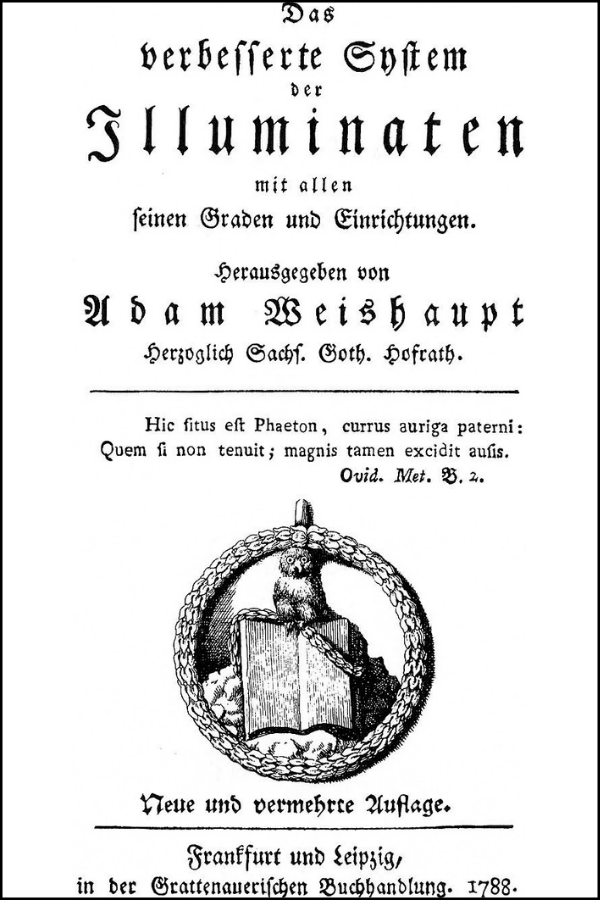 Public DomainA pamphlet on the Illuminati published by Adam Weishaupt in 1788 showing the Owl of Minerva, a common motif for Illuminati writings.

Conspiracy theorists also claim that many of the world’s most influential people are Illuminati members. After Thomas Jefferson praised Weishaupt’s desire to “reinstate natural religion, and by diffusing the light of his morality, to teach us to govern ourselves” in a letter to James Madison, he had to bat down rumors that he was part of the Illuminati.

Today, Beyoncé and Jay-Z have practically made a cottage industry of armchair analysts who detail their teasing embrace of Illuminati motifs. Meanwhile, novelist Dan Brown also fanned the flames when he included the Illuminati in his books, reviving interest in their story.

And ever since Denver International Airport opened in 1995 — more than a year behind schedule and $2 billion over budget — rumors have spread that its sprawling complex and mystical art are secret signs that it’s actually a dedicated hub of Illuminati activity.

But most historians say that the group no longer exists. After its 18th-century heydey, Adam Weishaupt’s followers became yet another casualty of history.

“They were wiped out,” Chris Hodapp, the co-author of Conspiracy Theories and Secret Societies for Dummies (with Alice VonKannon) to Vox. “People have tried to revive them over the years, but it’s a moneymaking scheme.”

As such, Adam Weishaupt’s ideas have endured — just perhaps not in the way he originally envisioned. Though his secret society, the Illuminati, lasted just nine years, curiosity about its inner workings and potential influence has endured for centuries.

Officially, his organization ended in 1785. Unofficially, who knows?

After discovering the story of Adam Weishaupt, the founder of the Illuminati, look through these 9/11 conspiracy theories. Or, learn about the Heaven’s Gate cult and their infamous suicide.