Inside The Tragic Murder Of Ennis Cosby, Bill Cosby’s Son Who Was Killed In Cold Blood

On January 16, 1997, Ennis Cosby pulled his car over to the side of a Los Angeles interstate to change a tire and was brutally gunned down by Mikhail Markhasev during a failed robbery. 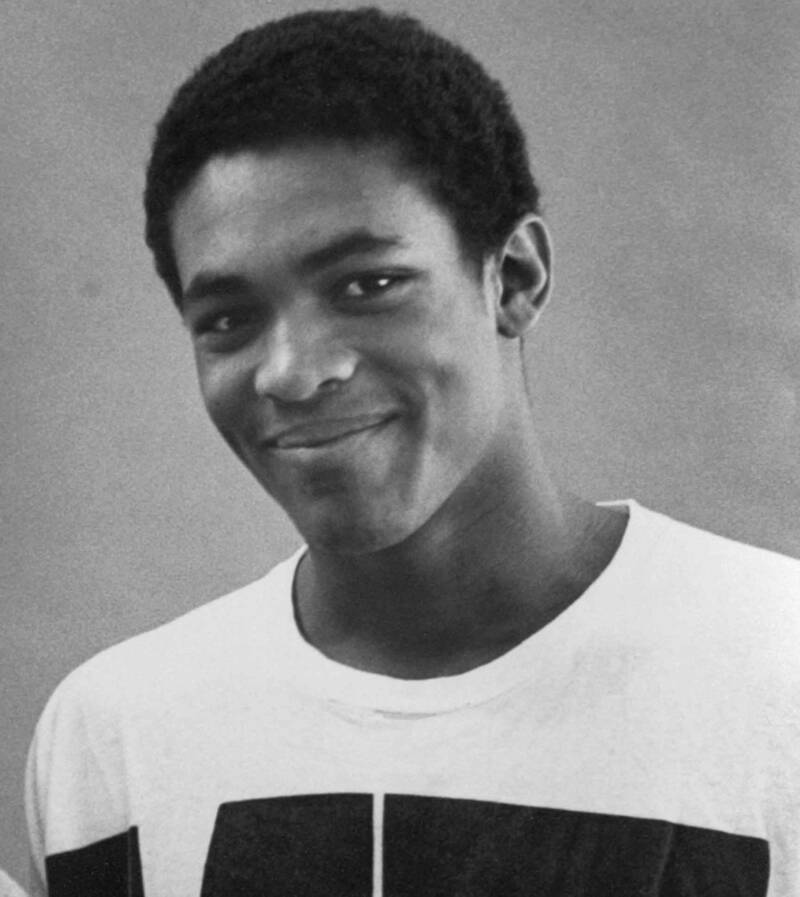 George SchoolEnnis Cosby lived with dyslexia until it was formally diagnosed when he was an undergraduate. From then on, he sought to help other students with learning disabilities.

By the 1990s, Bill Cosby — untainted by future scandals — was known as one of the funniest men in America. But true tragedy befell the famous comedian on Jan. 16, 1997, when his only son, Ennis Cosby, was shot and killed while changing a tire in Los Angeles.

Ennis, who provided his father with endless material for jokes and helped inform the character of Theo Huxtable on The Cosby Show, was on vacation in L.A. when he got a flat tire. As he worked to change it, 18-year-old Mikhail Markhasev tried to rob him — and shot him instead.

In the tragic aftermath, The Cosby family lay the blame for his death in two places. Markhasev had pulled the trigger and ended Ennis’s life, they said, but American racism had fueled the deadly attack.

This is the sad story of the life and death of Ennis Cosby, the only son of the disgraced man once known as “America’s Dad.”

Growing Up As Bill Cosby’s Son 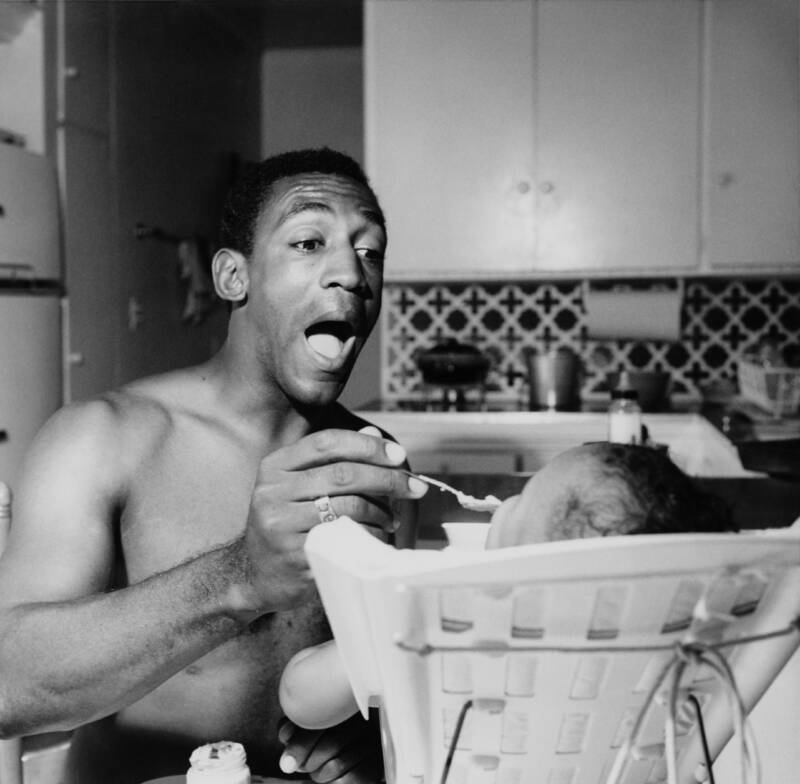 Archive Photos/Getty ImagesBill Cosby feeds one of his children in a high chair, c. 1965. Just like on The Cosby Show, Cosby had four daughters and one son.

Born on April 15, 1969, Ennis William Cosby was the apple of his father’s eye from the beginning. Bill Cosby, an established comedian, and his wife Camille already had two daughters — and Bill fervently hoped that his third child would be a boy.

Delighted to have a son, Bill frequently used his experiences with Ennis in his comedy routines. And when he co-created The Cosby Show, which ran from 1984 to 1992, Bill based the character of Theo Huxtable on his own son, Ennis Cosby.

According to The Los Angeles Times, Bill wove Ennis’s struggles with dyslexia into the show, depicting Theo Huxtable as a lackluster student who eventually overcame his learning disability.

That directly paralleled Ennis Cosby’s life. After being diagnosed with dyslexia, Cosby started taking special classes. His grades soared, and he went on to study at Morehouse College in Atlanta, then at the Teachers College at Columbia University in New York City. 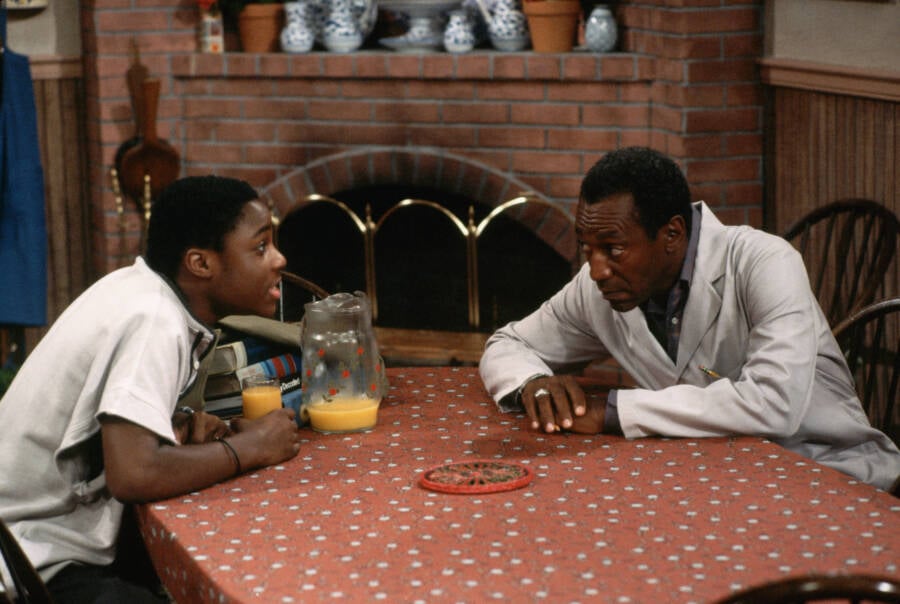 According to The Los Angeles Times, Bill Cosby’s son intended to get a doctorate in special education, with an emphasis in reading disabilities.

“I believe in chances, so I do not give up on people or children,” Ennis Cosby wrote in an essay, as reported by The Washington Post.

“I believe that if more teachers are aware of the signs of dyslexia and learning disabilities in the class, then fewer students like me will slip through the cracks.”

Cosby, handsome and athletic, also had his father’s sense of humor. Bill Cosby once happily related a story in which he told Ennis that he could have his dream Corvette if he got his grades up. According to Bill, Ennis responded, “Dad, what do you think about a Volkswagen?”

But tragically, Ennis Cosby’s life was cut short when he was just 27 years old.

The Tragic Murder Of Ennis Cosby 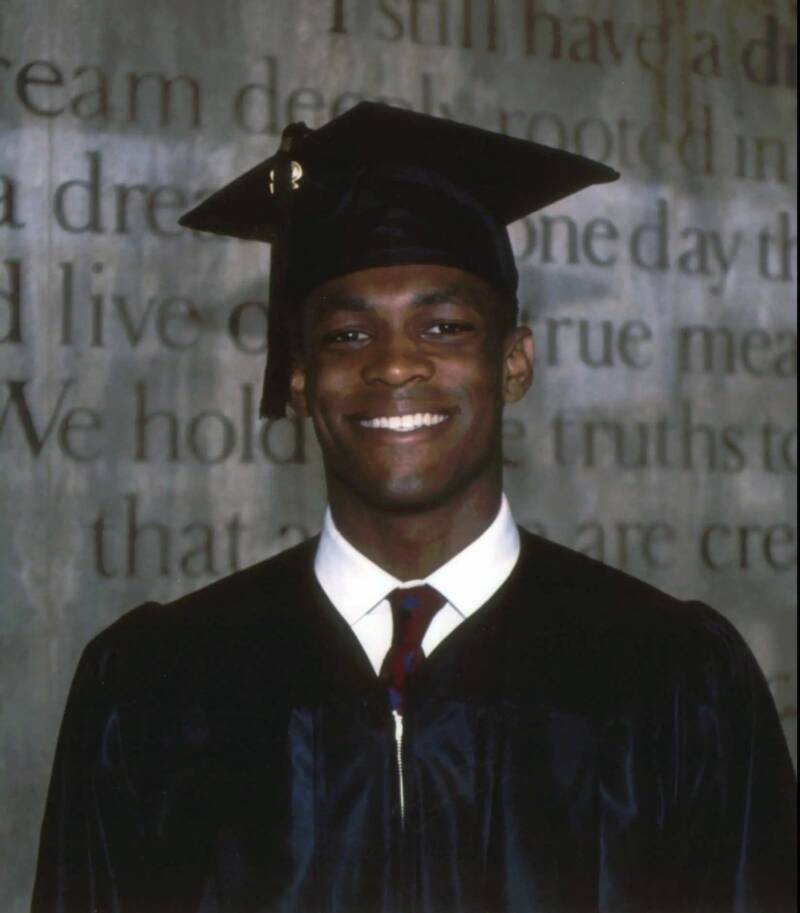 Howard Bingham/Morehouse CollegeEnnis Cosby was working toward his Ph.D. when he was shot and killed in Los Angeles.

In January 1997, Ennis Cosby flew to Los Angeles to visit friends. But around 1 a.m. on Jan. 16, he suddenly got a flat tire while driving his mother’s Mercedes SL convertible on Interstate 405 in the Bel Air neighborhood.

According to OK! magazine, Cosby called the woman he was seeing, Stephanie Crane, for help. She pulled up behind Cosby and tried to convince him to call a tow truck, but Ennis was adamant that he could change the tire himself. Then, as Crane sat in her car, a man approached her window.

His name was Mikhail Markhasev. An 18-year-old immigrant from Ukraine, Markhasev and his friends had been hanging out at a nearby park-and-ride lot when they saw Ennis and Crane’s cars. According to History, Markhasev was high when he approached the cars, hoping to rob them.

He went first to Crane’s car. Alarmed, she drove away. Then, he went to confront Ennis Cosby. But when he was too slow to hand over his money, Markhasev shot him in the head. 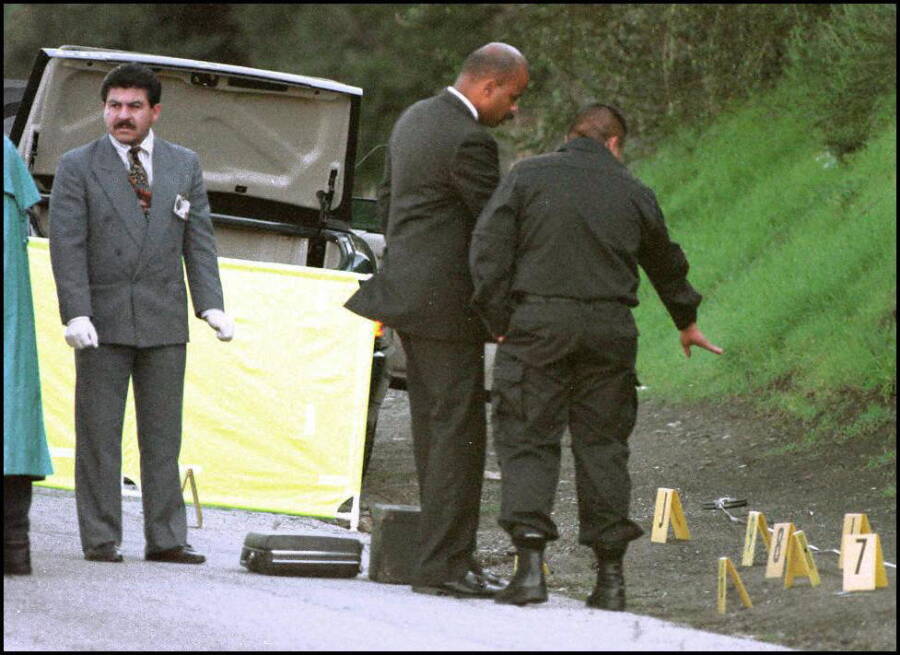 STR/AFP via Getty ImagesPolice investigate the scene where Ennis Cosby died. It took a tip from one his killer’s former friends to close the case.

The news struck the Cosby family — and the world — hard. “He was my hero,” a tearful Bill Cosby told television cameras. Meanwhile, CNN received significant criticism for airing footage of Ennis Cosby’s body lying on the side of the road.

But it took time — and a crucial tip — for police to track down Ennis Cosby’s killer. After National Enquirer offered $100,000 for any information on Ennis Cosby’s death, a former friend of Markhasev’s named Christopher So reached out to the police.

According to the Associated Press, he accompanied Markhasev and another man as they looked for the gun Markhasev had used, then discarded, in Ennis’s death. So told police that Markhasev had bragged, “I shot a nigger. It’s all over the news.”

Police arrested the 18-year-old in March and later found the gun he’d discarded, wrapped in a hat that contained DNA evidence pointing back to Markhasev. He was found guilty of first-degree murder in July 1998 and later sentenced to life in prison.

Though the Cosby family released no statement on Markhasev’s sentence, Ennis Cosby’s sister Erika did speak to reporters as they left the courtroom. According to The Washington Post, she was asked if she was relieved, to which she responded, “Yeah, finally.”

But in the years to come, Ennis Cosby’s death would strike his family as an open wound — in more ways than one.

After Mikhail Markhasev murdered Ennis Cosby, Cosby’s family struggled to make sense of the senseless tragedy. His mother, Camille, poignantly wrote an op-ed in USA Today in July 1998 that lay the blame for Ennis’s death at the feet of American racism. 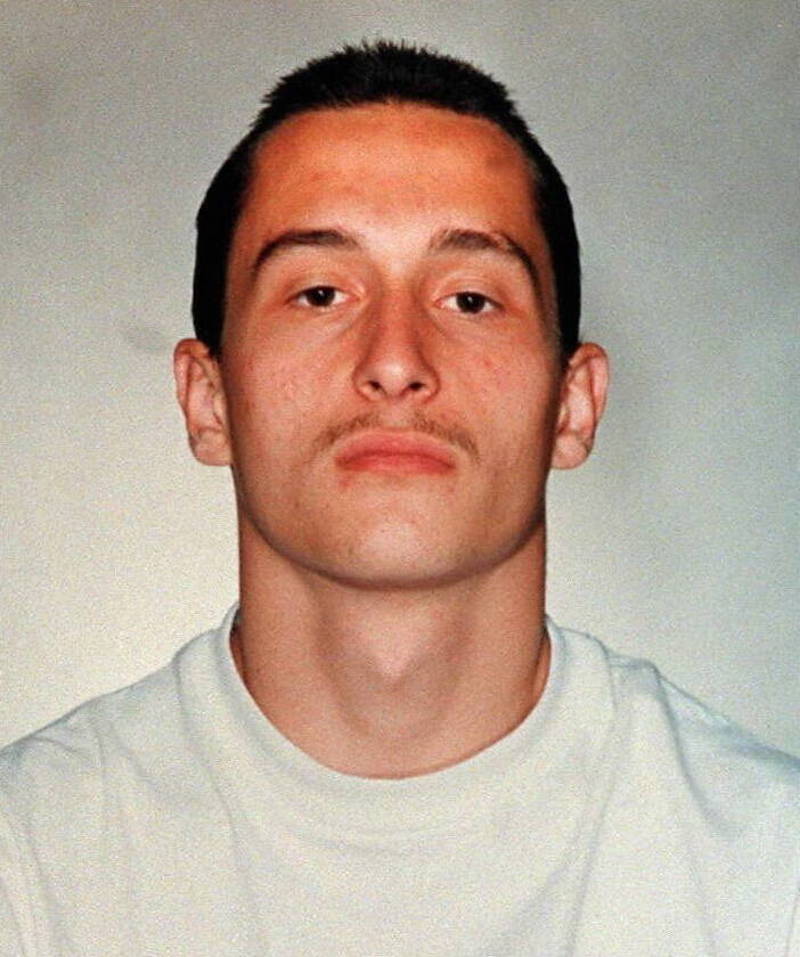 Mike Nelson/AFP via Getty ImagesMikhail Markhasev was 18 when he shot and killed Ennis Cosby in Los Angeles.

“I believe America taught our son’s killer to hate African-Americans,” she wrote. “Presumably, Markhasev did not learn to hate black people in his native country, the Ukraine, where the black population was near zero.”

Camille added, “All African-Americans, regardless of their educational and economic accomplishments, have been and are at risk in America simply because of their skin colors. Sadly, my family and I experienced that to be one of America’s racial truths.”

Adding to the Cosby family’s pain was the fact that Mikhail Markhasev refused to accept the blame for Ennis Cosby’s death. Until 2001, he denied that he’d pulled the trigger. But in February of that year, Markhasev finally admitted his guilt and declared he would stop appealing his sentence.

According to ABC, he wrote, “Although my appeal is in its beginning stages, I don’t want to continue with it because it’s based on falsehood and deceit. I am guilty, and I want to do the right thing.”

Markhasev added, “More than anything, I want to apologize to the victim’s family. It is my duty as a Christian, and it’s the least I can do, after the great wickedness for which I am responsible.”

Today, decades after Ennis Cosby’s death, Bill Cosby’s life has changed dramatically. His star has fallen mightily since the 1990s, as multiple women have accused the comedian of sexual assault. Bill was found guilty of aggravated indecent assault in 2018 — before his conviction was overturned in 2021.

However, he seemed to have kept his son Ennis Cosby in his thoughts all the while. As the comedian prepared to go to trial in 2017, Bill acknowledged all his children in an Instagram post. He wrote:

After reading about Mikhail Markhasev murder of Ennis Cosby, go inside the shocking death of comedian John Candy. Or, read about the tragic final days of comedian Robin Williams.