Meet Adelbert Waldron, The Deadliest Sniper Of The Vietnam War

During his single deployment in Vietnam, Staff Sergeant Adelbert F. Waldron III made 109 confirmed kills in just six months, making him the most lethal sniper in the history of the U.S. Army.

Adelbert Waldron preferred working in the shadows. During the Vietnam War, he became the conflict’s most prolific sniper while fighting in the dense jungle as a sergeant in the U.S. Army. And after returning home, he didn’t discuss his record-breaking 109 kills.

Though snipers generally don’t brag about their records, some, like Chuck Mawhinney and Carlos Hathcock — both Marines — have become well-known for their combat records. Waldron, on the other hand, quietly returned home in 1969 and remained mum about his service for the rest of his life. 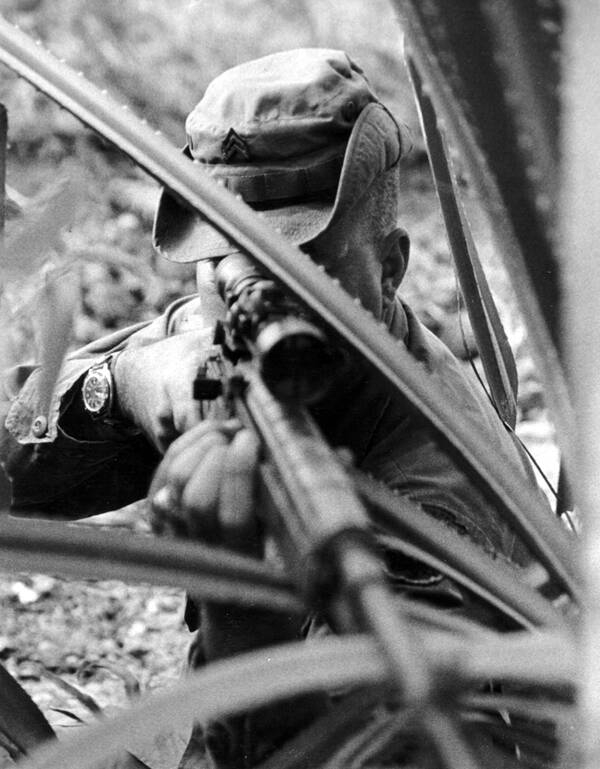 U.S. ArmyThe only verified photo of Adelbert Waldron in Vietnam.

But his military achievements speak for themselves. He had 109 confirmed kills, making him the deadliest sniper in the history of the U.S. Army. And he finished the war with two Distinguished Service Crosses, three Bronze Stars, one Silver Star, and a Presidential Unit Citation.

And until 2011, when Navy SEAL Chris Kyle eclipsed his record, Adelbert “Bert” Waldron was the deadliest American sniper who had ever lived.

Adelbert F. Waldron III developed his shooting skills at a young age. Born on March 14, 1933, in Syracuse, New York, Waldron dealt with his parent’s divorce and subsequent remarriages by hunting in the woods around nearby Baldwinsville.

“[Bert] always told me how lonely he was as a child,” his ex-wife, Betty, told author Paul Kirchner. “He was so unhappy in his home life that he spent all his time hunting in the woods… I’m sure that’s when he learned his marksmanship. He could mimic wild animal sounds perfectly.”

But Waldron didn’t spend all his time alone. By the time he was 23, he’d married three times. And in 1953, Waldron escaped his solitary existence for good by enlisting in the U.S. Navy, where he served in the Korean War.

Waldron spent 12 years with the Navy, serving in the Korean War, eventually becoming a petty officer second class before accepting a discharge in 1965. But he seemed restless in civilian life. Less than three years later — and with war brewing in Vietnam — the 35-year-old enlisted in the U.S. Army.

Attached to Company B, 3rd Battalion, 60th Infantry Regiment of the 9th Infantry Division, Sgt. Adelbert Waldron trained in Fort Benning, Georgia, and shipped out for Vietnam in November 1968.

Upon his arrival in Vietnam, Adelbert Waldron learned how to be a sniper at the Army Marksmanship Unit. He then accompanied his unit deep into the dangerous Mekong Delta — a labyrinth of streams, canals, and rice paddies — and quickly proved his mettle as a marksman. 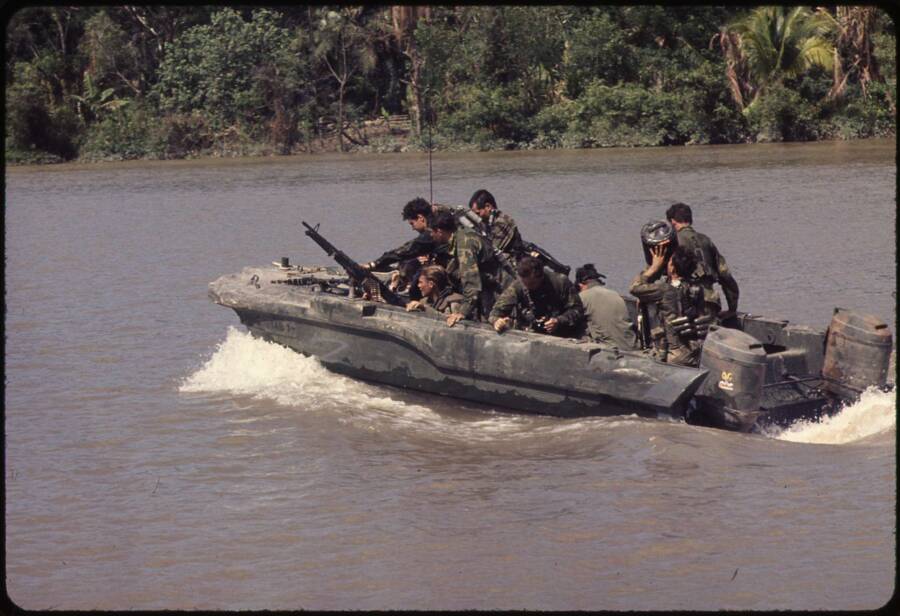 National ArchivesAmerican soldiers in the Mekong Delta during the Vietnam War, circa 1967.

When Waldron and his unit came under attack by the Viet Cong on Jan. 19, 1969, the newly-trained sniper sprang into action.

“Courageously exposing himself to the fusillade, Sergeant Waldron killed a number of the aggressors and was instrumental in forcing them to break contact.”

“Disregarding his own safety, Specialist Waldron courageously engaged the enemy for over three hours before his position was detected and he was forced to withdraw from the area,” his commendation for the Silver Star award said.

“As a result of his heroic acts, eleven enemy were mortally wounded.”

Waldron shone as a sniper again and again. On Jan. 30, he took out eight Viet Cong fighters with eight shots — from 500 yards away and at night. On Feb. 3, he killed six Viet Cong who’d attempted to outflank American troops. And on Feb. 14, Viet Cong fighters shot at by Waldron withdrew in confusion, unsure how many shooters were crouched in the jungle.

But Adelbert Waldron’s most famous moment as a sniper came on Feb. 26. Then, while patrolling the Mekong river in a Tango boat, Waldron and his fellow soldiers suddenly encountered sniper fire from the shore. As his commanding officer, Major General Julian Ewell, recalled it:

“While everyone else on board strained to find the antagonist, who was firing from the shoreline over 900 meters away, Sergeant Waldron took up his sniper rifle and picked off the Viet Cong out of the top of a coconut tree with one shot… such was the capability of our best sniper.”

His fellow soldiers soon dubbed Waldron “Daniel Boone” after the famous frontiersman. But Waldron had more advanced weaponry than Boone did. He favored an XM21 rifle that was 44 inches long, weighed about 12 pounds, and had a range of 900 yards (as Waldron proved). 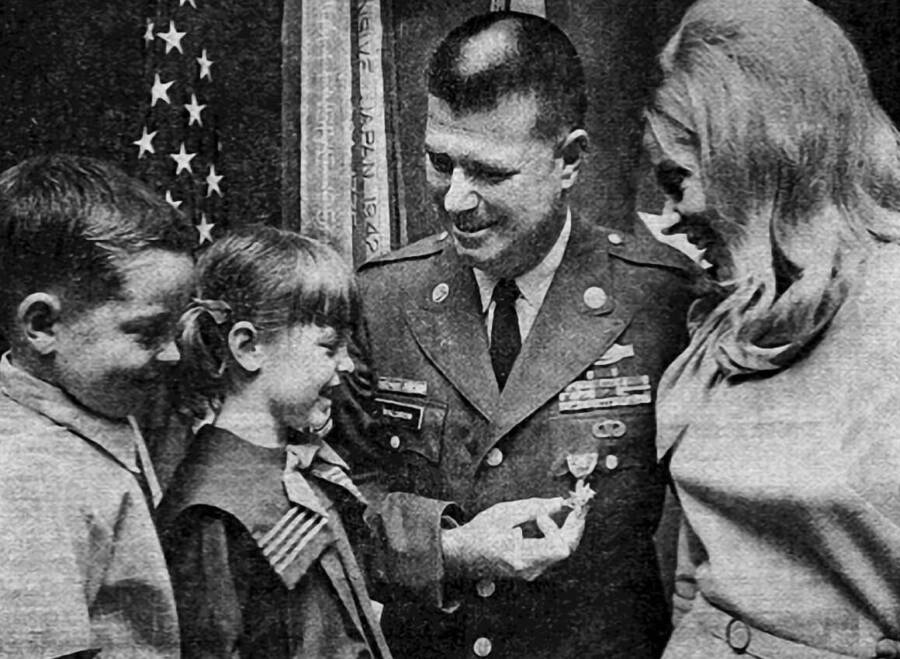 Columbus Daily InquirerAdelbert Waldron, Betty, and her two children in 1970.

By the time his tour in Vietnam ended and he shipped home on July 21, 1969, Waldron had 109 confirmed kills in just eight months. That made him the deadliest American sniper of all time, a record he’d keep until the Iraq War.

But Adelbert Waldron never bragged about his record as a sniper. Indeed, he rarely spoke publicly at all. He spent the next few decades of his life living as he always had – in the shadows.

The Legacy Of The Deadliest Sniper In The U.S. Army

Following his service in Vietnam, Adelbert Waldron returned to civilian life. But though he was honored with two Distinguished Service Crosses, three Bronze Stars, one Silver Star, and a Presidential Unit Citation, his transition from war proved rocky. 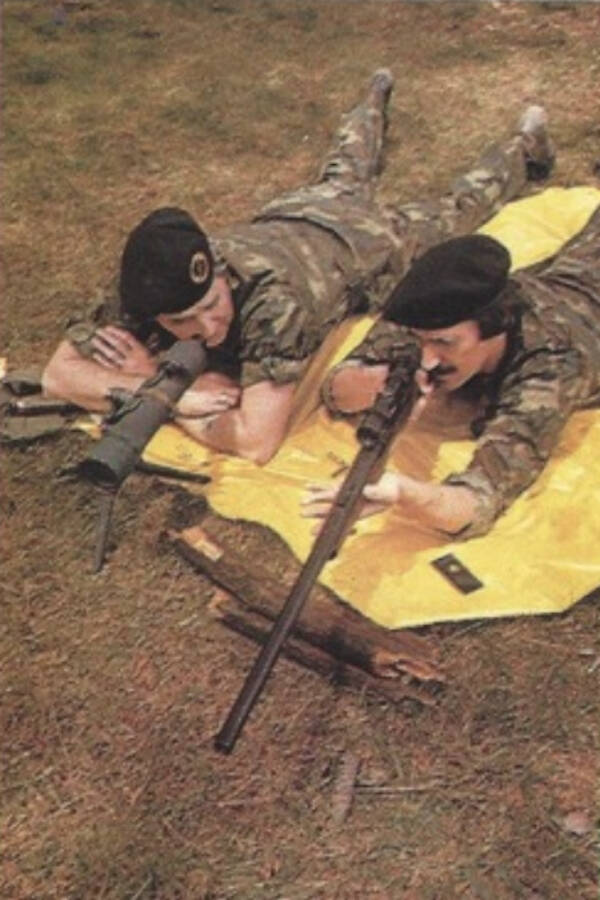 Soldier of FortuneAdelbert Waldron as a sniper instructor at the Cobray school in 1980.

“Bert was a wonderful soldier,” his ex-wife, Betty, said. “He loved his country, he would have died for this country, but he had a lot of problems as a human being.”

He divorced, remarried, and divorced again. Meanwhile, Waldron worked as an instructor at the U.S. Army Marksmanship Unit before taking a job as an instructor with Mitchel WerBell III’s Cobray International school, a mercenary, firearms engineer, and former CIA operative.

Waldron toiled in quiet obscurity, never seeking fame for his record-breaking service as a sniper. When he died to little fanfare of a heart attack on Oct. 18, 1995, Waldron was still the most prolific sniper in American history — besting better-known snipers like Carlos Hathcock and Chuck Mawhinney.

He kept that record until 2011. Then, Iraq War veteran Chris Kyle wrote in his book American Sniper: The Autobiography of the Most Lethal Sniper in U.S. Military History, that the Navy credited him with 160 confirmed kills.

In the end, many details of Adelbert Waldron’s service remain lost to time. He never gave interviews or wrote books. Waldron never publicly recalled how it felt to kill or how he dealt with the terror and glory of warfare. His record — his confirmed kills and awards — must speak for themselves.

As his Silver Star award states: “Sergeant Waldron’s extraordinary heroism and devotion to duty were in keeping with the highest traditions of the Military Service and reflects great credit upon himself, his unit, and the United States Army.”

After reading about Adelbert Waldron’s success as a sniper, look through these facts about the Vietnam War or discover the stories of six of the deadliest Soviet snipers of World War II.