Men Being Raped By Women Is Much More Common Than Most Realize, New Research Shows

Men report women using bribery and threats to force them to have nonconsensual sex. 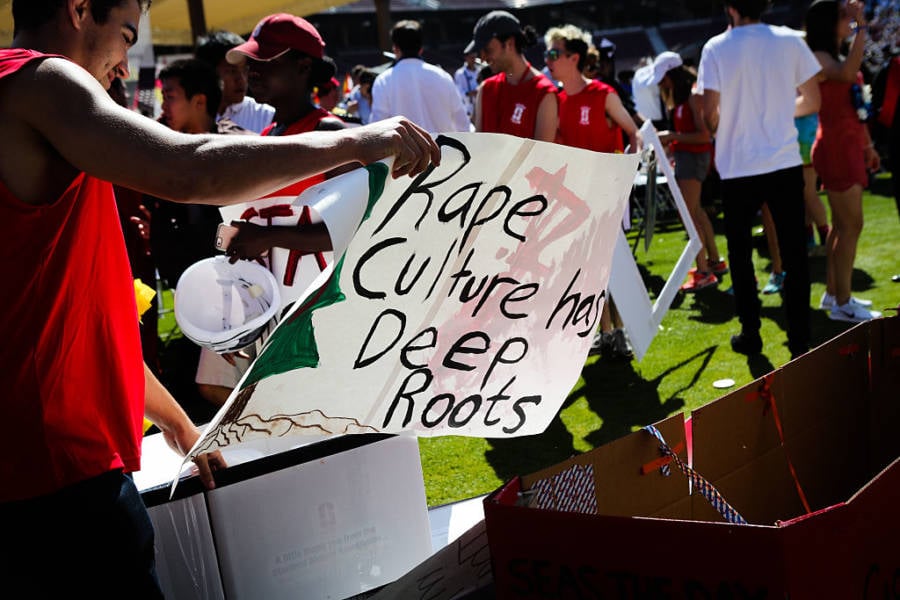 GABRIELLE LURIE/AFP/Getty ImagesA man carries a sign to show his solidarity for a Stanford rape victim during graduation ceremonies.

For a long time, the FBI’s official definition of rape was “carnal knowledge of a female forcible and against her will.”

This suggests that all men are immune to non-consensual sex, completely ignoring the concept of men who are raped by other men, or men who are forced to have sex with non-physical means.

The definition was eventually changed to focus on any instance of forced penetration — including when someone is “made to penetrate” someone else — but the gender stereotypes associated with sexual assault remained firmly intact.

Lara Stemple, the Director of UCLA’s Health and Human Rights Law Project, has been working to change that with research focusing on a topic she feels too many researchers and advocates have overlooked as unimportant or inconsequential: male victims of rape.

Don't forget – not only women, but also men, are victims of domestic violence: https://t.co/y5wMAOyc8T via @latimes

The idea for this focus came to her when she came across National Crime Victimization Survey that found that 38 percent of sexual violence victims are men — a proportion drastically higher than other data had suggested. She even called the investigation bureau to make sure the statistic wasn’t a typo.

What she found is that the experiences of male and female rape victims are “a lot closer than any of us would expect,” according to Slate.

Investigating further, Stemple and her colleagues found that 4.5 million American men have been forced to penetrate another individual.

Perhaps even more surprisingly: When the national data on rape was combined with data on victims forced to penetrate someone else with coercion, bribery, or when they were drunk, high or otherwise unable to consent, the rates of nonconsensual sex were basically equal.

RT ltsFeminism: This needs to be talked about more so male rape victims can actually feel supported and understood pic.twitter.com/DrVNVEzrDG

About 1.270 million women and 1.267 million men were victims of sexual violence.

To be extra clear: this does not mean that rape culture is not something that has been a consistent and violent problem for women in America. It just means, Stemple argues, that more conversations need to be had about how the culture affects men.

“Stemple is a longtime feminist who fully understands that men have historically used sexual violence to subjugate women and that in most countries they still do,” journalist Hanna Rosin wrote. “As she sees it, feminism has fought long and hard to fight rape myths—that if a woman gets raped it’s somehow her fault, that she welcomed it in some way. But the same conversation needs to happen for men.”

Stemple then wondered who were the perpetrators in these previously little-discussed male victim cases.

In a 2016 report she found — again — the pretty unexpected answer.

While both women and men who were themselves penetrated forcibly were much, much more likely to be abused by other men, among men reporting other forms of sexual abuse, 68.6% of the perpetrators were women.

Men who reported being made to penetrate without consent — which was the “form of nonconsensual sex that men are much more likely to experience in their lifetime” — 79.2% of the perpetrators were female.

Building on these findings, a research project released last month from Lancaster University found that 20% of men who have been forced to have sex by a woman were threatened (verbal abuse and threats to end the relationship, for example) or blackmailed.

The study called sexual violence by women against men one of the “last taboos.”

“The ‘hidden’ nature of this crime and the ‘complex’ gender dynamics involved means that huge numbers of survey participants were highly unlikely – not because this isn’t happening to men, but because many are made to feel too ashamed or feel too distressed to report it,” the study’s author, Dr. Siobhan Weare, said.

Stemple and her colleagues also found another interesting number that contradicted national stereotypes:

Taken together, all of this surprising data suggests that there’s a severe lack of research and understanding with regard to the entire scope of rape culture in America.

“We recommend that professionals responding to this problem avoid gender stereotypes that downplay the frequency and impact of female sexual perpetration so as to comprehensively address sexual victimization in all forms,” the study’s authors suggest.

They clarified that this does not mean taking attention away from female victims of sexual assault.

“Compassion,” Stemple said, “is not a finite resource.”

Next, read how it took police 16 years to realize that dentures found at a rape scene had the attacker’s name written on them. Then, learn about Bill Cosby’s ridiculous “how to avoid sexual assault accusations” tour.