When the recording was released in the 1950s, Hitler sounded so subdued that many people thought it was fake. 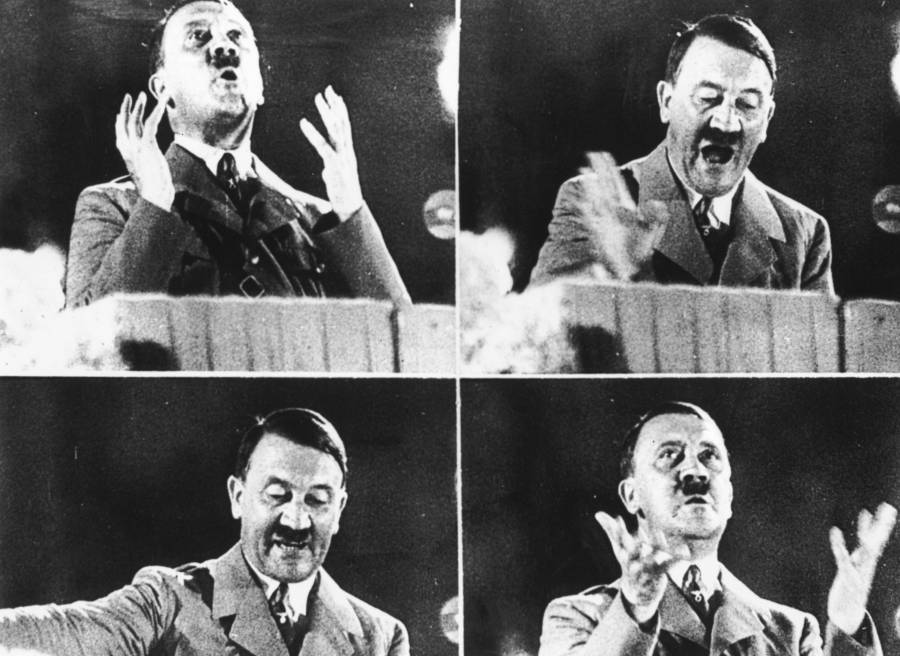 Keystone/Getty Images14th October 1944: German dictator Adolf Hitler at various moments during his delivery of a speech.

“I know that men are won over less by the written word than by the spoken word,” Adolf Hitler once said, “That every great movement on this earth owes its growth to great orators and not to great writers.”

And despite being one of the vilest men to ever walk the planet, Hitler was an extremely effective orator.

He gave more than 5,000 speeches during his time building and leading the Third Reich. They were full of yelling, big gestures, and even bigger promises: to make Germany great again.

“I was born in 1929, so from ’33 on, my earliest memories are sitting in the kitchen hearing The Voice on the radio,” French-American novelist George Steiner, said in Ron Rosenbaum’s book “Explaining Hitler.” “It’s a hard thing to describe, but the voice itself was mesmeric.”

Stripped of a podium, a stage, and a heavily practiced speech, though, Hiter was said to be an awkward but charming man with terrible small talk and a weak, sweaty handshake.

He was probably very aware of these weaknesses — which is why he had himself photographed practicing all of his speeches, carefully taught himself to use his tone and gestures to denote power, and strictly made sure that no recordings existed of him in an unofficial setting.

…Except for this one he didn’t know about:

This is the Hitler and Mannerheim recording — a conversation between the Nazi leader and Baron Carl Gustaf Emil Mannerheim, the Commander of the Finnish Defense Forces.

It was created secretly on June 4, 1942, by Thor Damen, an engineer for YLE, a Finnish broadcasting company.

Hitler was meeting with Mannerheim officially in honor of the Finnish leader’s 75th birthday. (Because what else could anyone want for a birthday party?) Damen and other media representatives were present to record the approved official birthday speech and Mannerheim’s response.

Unofficially, the meeting had negotiating purposes. Hitler was having some trouble dealing with the Soviet Union and needed some allies to help out. Mannerheim was open to the idea, but didn’t want people to know about the negotiations — so he agreed to meet with Hitler at Immola Airfield and have lunch with him in a train car.

Damen, that sneaky bastard, decided to keep his recorder going as Hitler and Mannerheim continued to chit-chat. 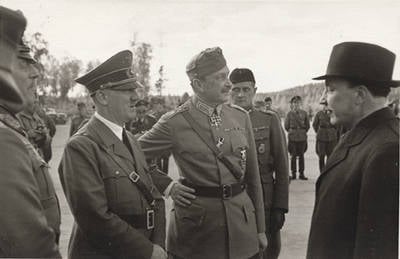 It didn’t take long for the SS to notice and demand that Damen stopped recording.

“When the German security officers found out, it really became a scene, with them threatening to kill Damen and ordering him to destroy the tape,” Lasse Vihonen, the head of YLE sound archives, told The Guardian. “It is the only one in existence where Hitler speaks freely.”

Damen managed to convince the Gestapo that he had destroyed the recording, and was allowed to walk out with his life and a unique historical artifact.

Though it is a one-of-a-kind clip, the conversation wouldn’t be at all remarkable were it being had by any other men.

It’s calm, slightly rambling, and void of any surprising bits of information.

“Had I finished off France in ’39, then world history would have taken another course,” Hitler says at one point. “But then I had to wait until 1940. Then a two-front war, that was bad luck. After that, even we were broken.”

The voice sounds so unlike the one used in Hitler’s public appearances that many people thought it was an impersonator when the tape was eventually released in the 1950’s.

Next, check out these 44 revealing photos of life inside the Hitler Youth. Then, read about how the Nazis had no idea that the “perfect Aryan” child in their propaganda was actually Jewish.