Amou Haji of Dejgah, Iran claimed that cleanliness causes illness and that his avoidance of bathing was the reason he managed to live to 94 without any major health problems.

He was widely known as the dirtiest man alive. But to Amou Haji of Dejgah, Iran, that was never a bad thing. 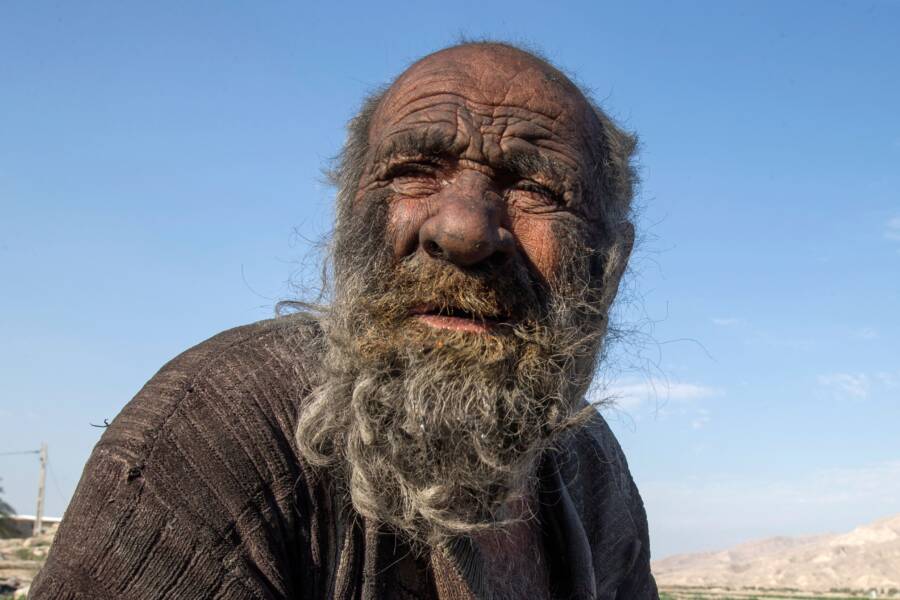 AFP/Getty ImagesAmou Haji, pictured on the outskirts of his village in Dejgah, Iran. 2018.

Before he died at the ripe old age of 94 in October 2022, he hadn’t bathed for almost seven decades, aside from one wash just a few months before his death. However, it’s hard to pin down the exact reason why. According to Times Now News, some locals think that he was scared of water. Others say he simply believed that cleanliness brings illness, and he remained dirty in the pursuit of a healthier lifestyle.

Almost everyone insisted that Haji endured some sort of adolescent trauma that caused him to seek a life of isolation. ZME Science reported that as a young man, he fell in love with a woman who rejected him.

Whatever the true reason for his uncleanliness, it seemed to suit Haji just fine — as did his myriad of other quirks that many of us would find completely revolting.

In the end, not only did he live with just one wash between the 1950s and 2022, he made it to the age of 94 despite conventional wisdom saying that traditional hygiene is an important part of living a long and healthy life. This is the astonishing story of Amou Haji.

Amou Haji reportedly subsisted on a diet that was largely made up of roadkill. He claimed that his favorite food was rotten porcupine meat.

It’s not that he didn’t have access to fresh food — he just genuinely disliked it. Haji allegedly became upset when villagers tried to bring him home-cooked meals and clean water. 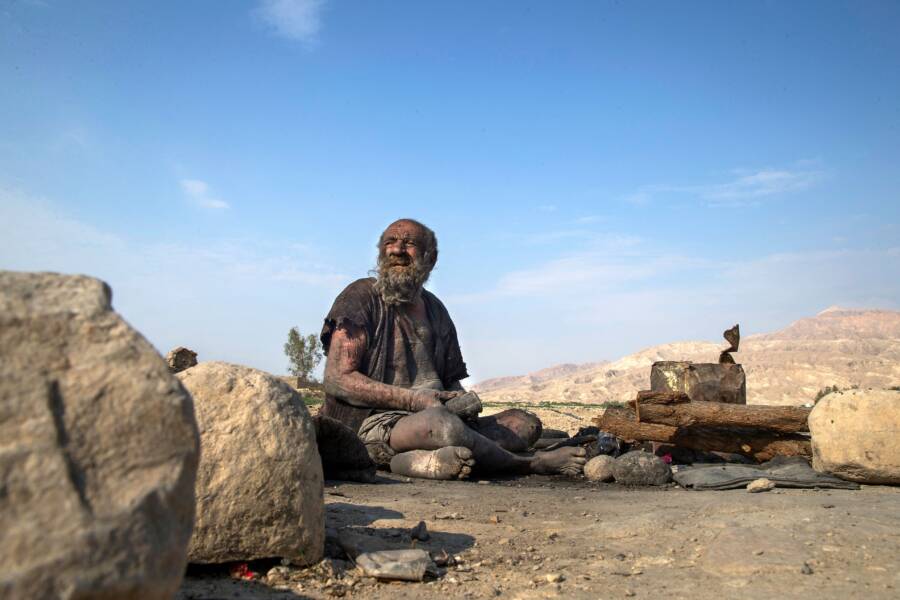 AFP/Getty ImagesAmou Haji was so dirty that passersby often mistook him for a rock.

But though he rejected fresh water, he still stayed hydrated, drinking a gallon of liquid every day. He collected his water from puddles and sipped it from a rusty oil tin.

When not eating or drinking, Haji enjoyed his favorite pastimes — like smoking animal feces from his pipe. When there was no dung around, he’d settle for tobacco cigarettes, and he was known to smoke up to five of them at a time.

The Bizarre Lifestyle Choices Of The World’s Dirtiest Man

Though Haji occasionally received gifts of food and cigarettes from local residents, he preferred to keep to himself. He lived just outside the tiny village of Dejgah, and his favorite sleeping spot was a hole in the ground. 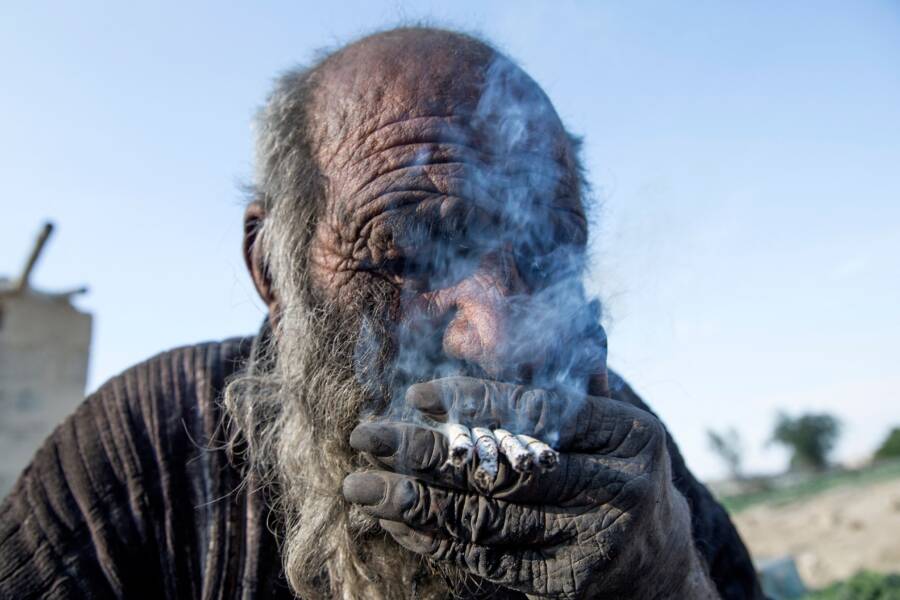 Several years ago, a group of friendly citizens built him an open brick hut to sleep in when it was wet or cold outside. In addition to the shack, he managed to keep warm during the cooler months by wearing an old war helmet and layering the few rags of clothing he owned.

Amou Haji may not have bathed, but he still cared about how he looked. He trimmed his hair and beard by burning them to the desired length with an open flame, and he used random car mirrors to occasionally check his reflection.

However, while he apparently enjoyed living in isolation, he did seemingly get lonely at times. Haji had some understandable troubles when it came to meeting people, but he reportedly said that he would have loved to have found a wife. 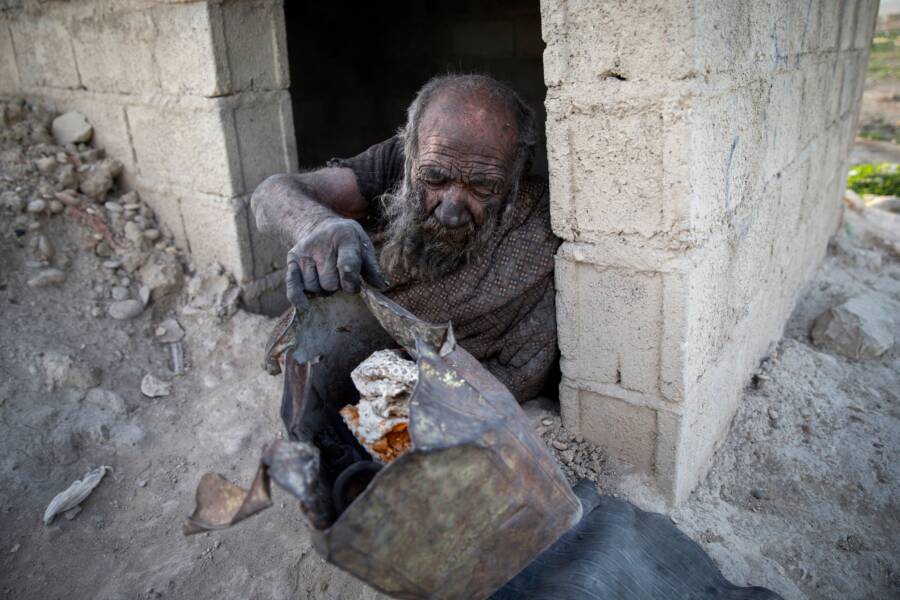 AFP/Getty ImagesHaji crouching at the entrance of his brick hut.

According to LADbible, Haji’s hobbies included keeping up with politics and discussing the wars he had the most knowledge of — the French and Russian Revolutions. The local governor even said that Haji was pleasant to converse with despite his appearance, and he condemned troublemakers who verbally belittled and threw stones at the hermit.

Haji seemed to get used to the harassment, however, as he dealt with it for nearly 70 years.

For someone who hadn’t bathed since the 1950s, Amou Haji was surprisingly healthy all his life. Local doctors who ran tests on him were stunned that the 94-year-old man could maintain his unhygienic lifestyle.

According to PopCrush, an associate professor of parasitology from the school of public health in Tehran named Dr. Gholamreza Mowlavi once ran some tests on Haji to determine if he had any illnesses that needed to be treated. 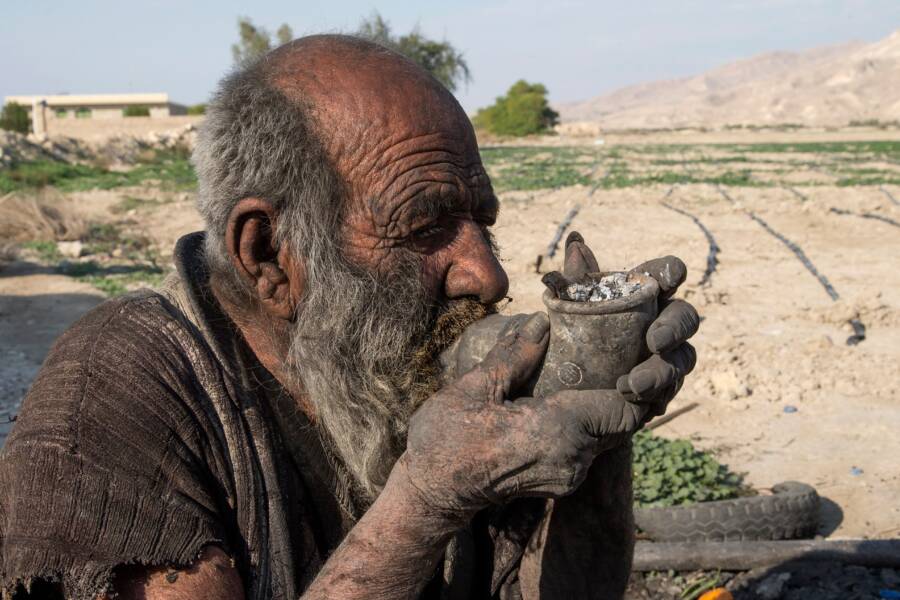 After testing for everything from hepatitis to AIDS, Mowlavi concluded that Amou Haji was in very good health. In fact, he only had one ailment — trichinosis, a parasite infection caused by eating raw or undercooked meat. Thankfully, Haji didn’t seem to exhibit any life-threatening symptoms.

Dr. Mowlavi also noted that Haji likely had a solid immune system after almost seven decades without a bath. In eschewing conventional hygiene, perhaps the world’s dirtiest man was onto something, after all.

Amou Haji flourished in his unconventional approach up until his death of natural causes at 94 in 2022. And according to the Guardian, his death came just a few months after locals convinced him to take his first bath in approximately 70 years.

After learning about Amou Haji, the dirtiest man in the world, read about the Boston man who had a decades-old tapeworm in his brain. Then, go inside the story of the “world’s loneliest woman.”