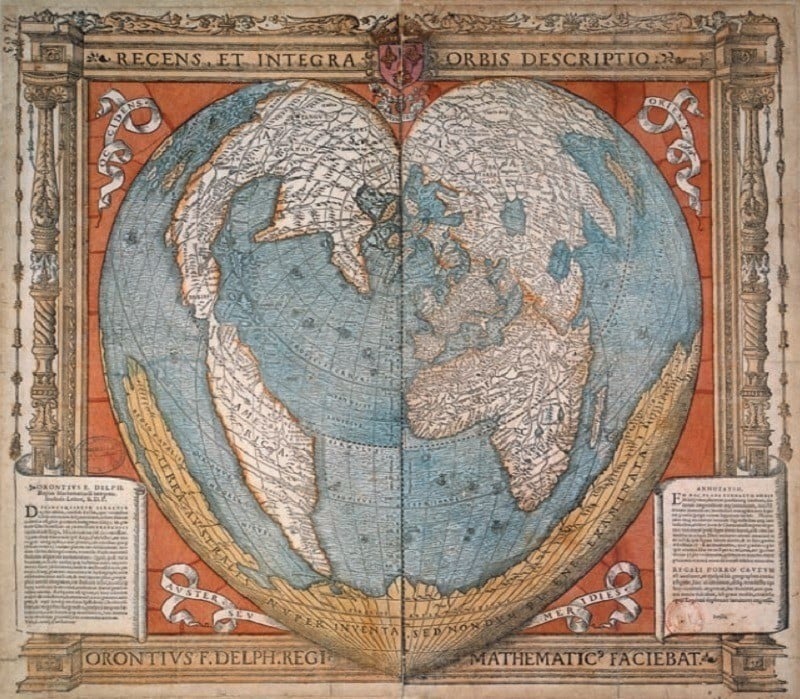 Maps weren’t always sourced from the likes of Google or Apple. In fact, maps weren’t even always printed on paper. Whether etched into brass, carved into tomb ceilings, or drawn onto deerskins, ancient maps show us not merely how different our ancestors’ technology and knowledge were, but how differently they saw the world.

Sure, the ancients knew little or nothing of the New World and thought there was a massive southern continent there to balance out the lands of the north. And sure, even if the ancients were aware of the whole globe, they didn’t have the tools to accurately survey it. But the differences between modern maps and ancient maps are far deeper than that.

Today, maps are, for the most part, strictly representational: they depict the earth as it is in factually accurate geopolitical terms. But as recently as a few hundred years ago, maps were often more loosely expressive, informed to a greater extent by spirituality and art than by science.

With these 25 ancient maps, look back on a time when many may have thought the world was flat, but the maps, in every sense of the word, were not. 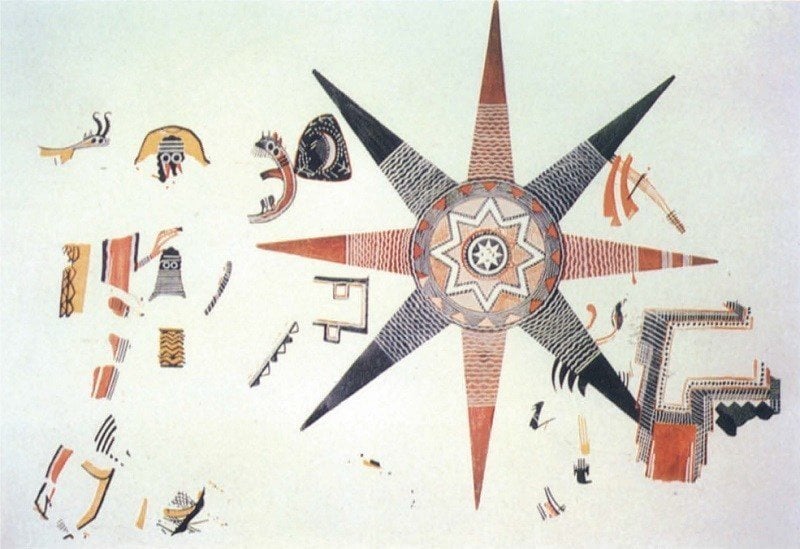 This eight-rayed star fresco from Teleilat, Ghassul, dates to the middle of the fourth millennium B.C. and might be the oldest cosmological map in existence. According to a leading theory, the inner circle is the known world, surrounded by an ocean, a second world, another ocean, with the eight points representing celestial islands. 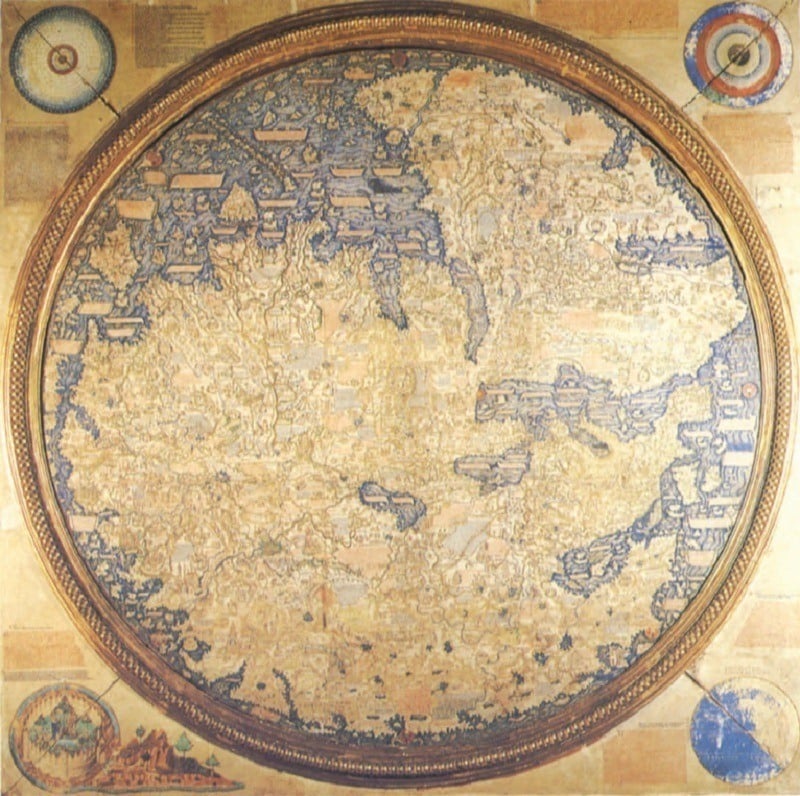 The Fra Mauro map, named after its creator, is often considered the height of medieval cartography. Created in 1459, the map marks the end of cartography based on religion or tradition, instead embracing reason and fact, including input from the likes of Marco Polo and the Portuguese explorers in Africa. 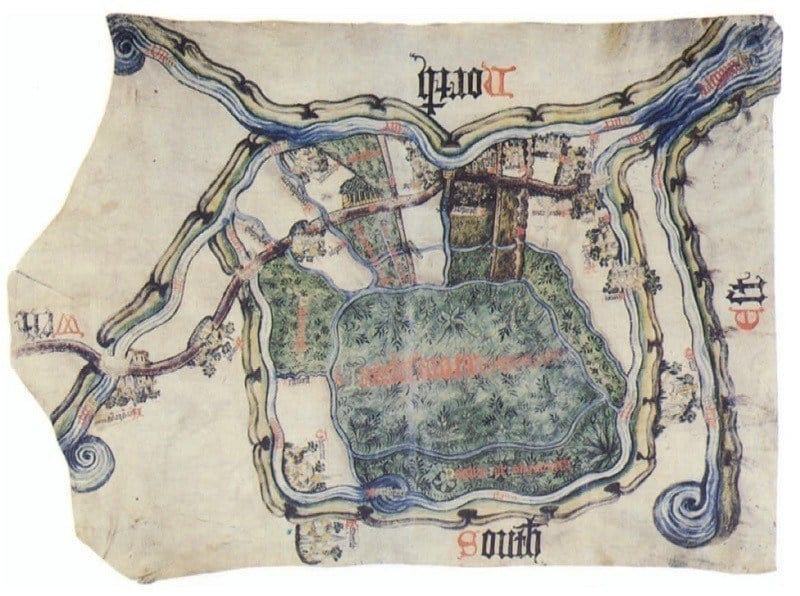 This 1400s map of Inclesmoor, Yorkshire, holds a surprising backstory: it was created to settle a dispute between Saint Mary's Abbey and the Duchy of Lancaster over nothing other than the “rights to pasture and peat” in the area. 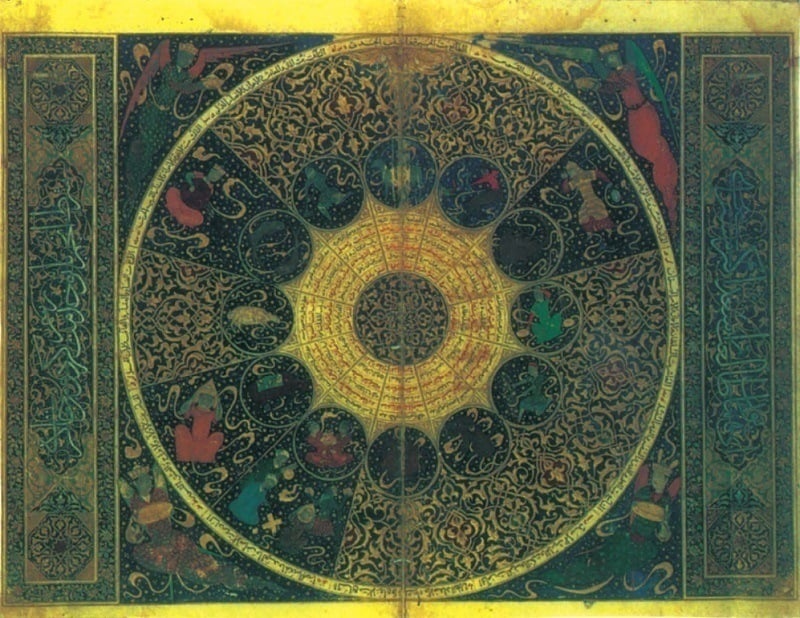 You’re looking at an astrological map of the heavens on the night of April 25, 1384, the birthdate of Timurid Prince Iskandar. This horoscope, created in 1411, serves as an extraordinary example of the Timurid Dynasty’s advanced publishing capabilities. 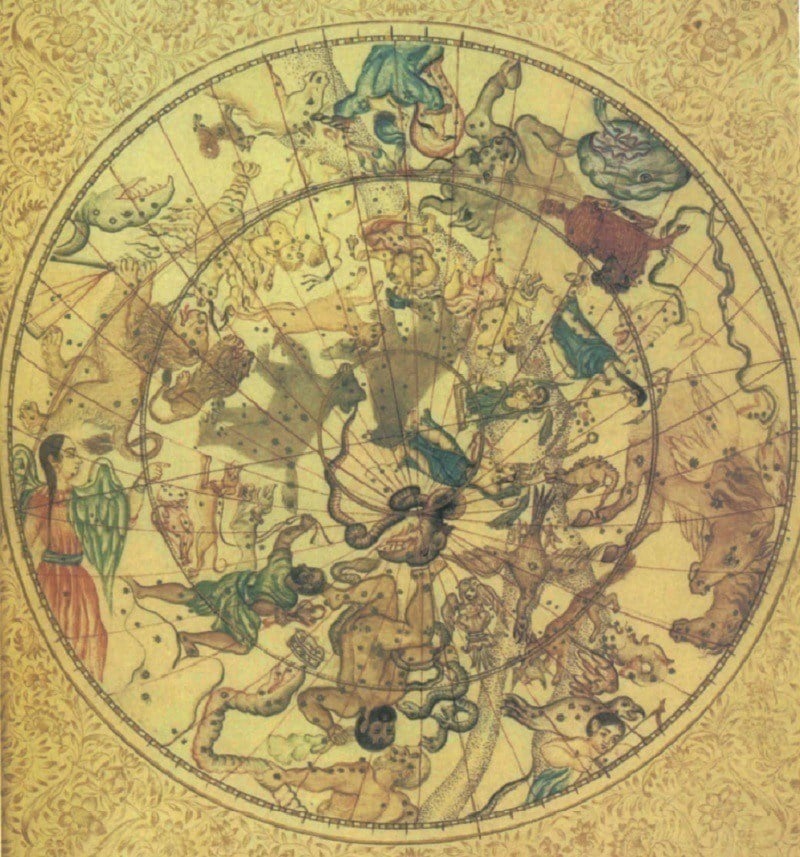 This planispheric map charting northern constellations and the metaphorical figures assigned to them comes from Indian astronomer Durgashankara Pathaka, who wrote it at an unknown point prior to 1839. 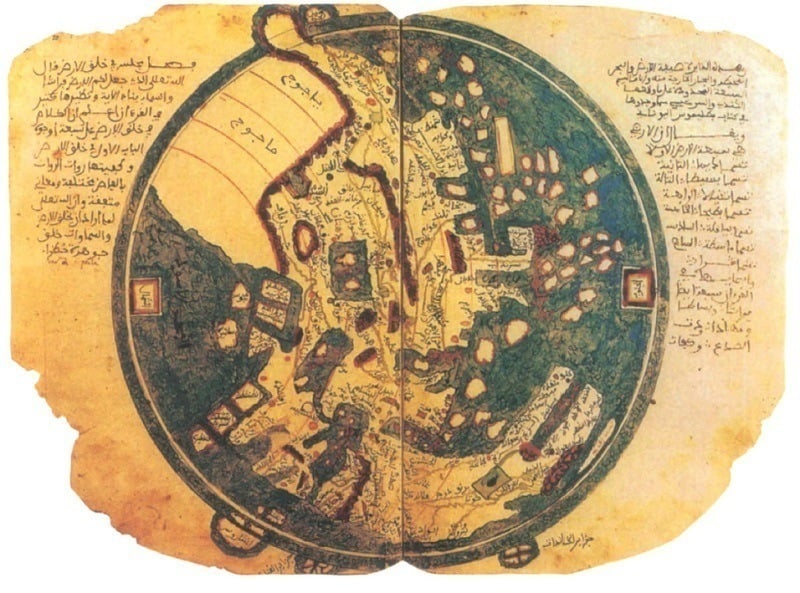 This ancient map might throw modern readers for a loop: It puts the East at the top of the map, reminding everyone that direction is relative. For the Islamic geographer behind this 13th century map, Ibn Sa'id, it was a natural choice to feature his home country front and center. 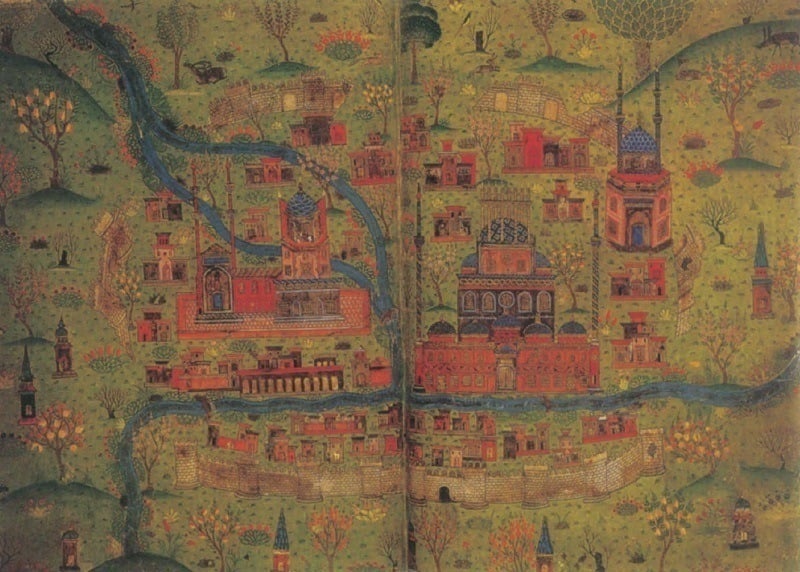 Soltaniyeh, the ancient capital of the Mongol Ilkhanid Dynasty, is now noted as an UNESCO World Heritage Site for its stellar, still-standing examples of Persian and Islamic architecture. The map above, created in the 1400s, depicts the ruins of the city walls alongside a beautiful new city, along with plants and wildlife. 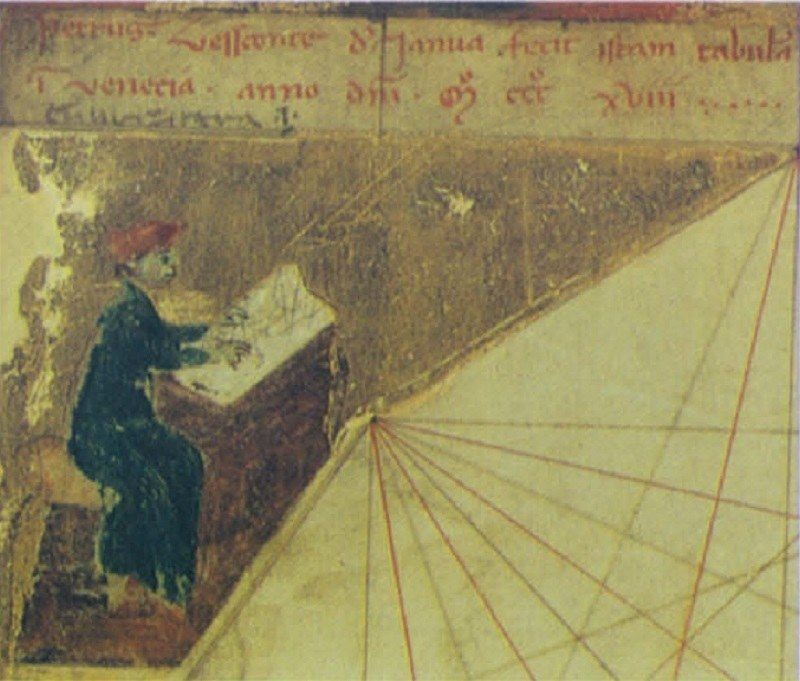 From the History of Cartography itself: “This cornerpiece from one of two atlases by Pietro Vesconte dated 1318 shows a mapmaker working on a chart. The legend above the vignette reads, ‘Petrus Vesconte of Genoa made this map in Venice, A.D. 1318,’ and it is tempting to suppose that the portrait is of Vesconte himself.” 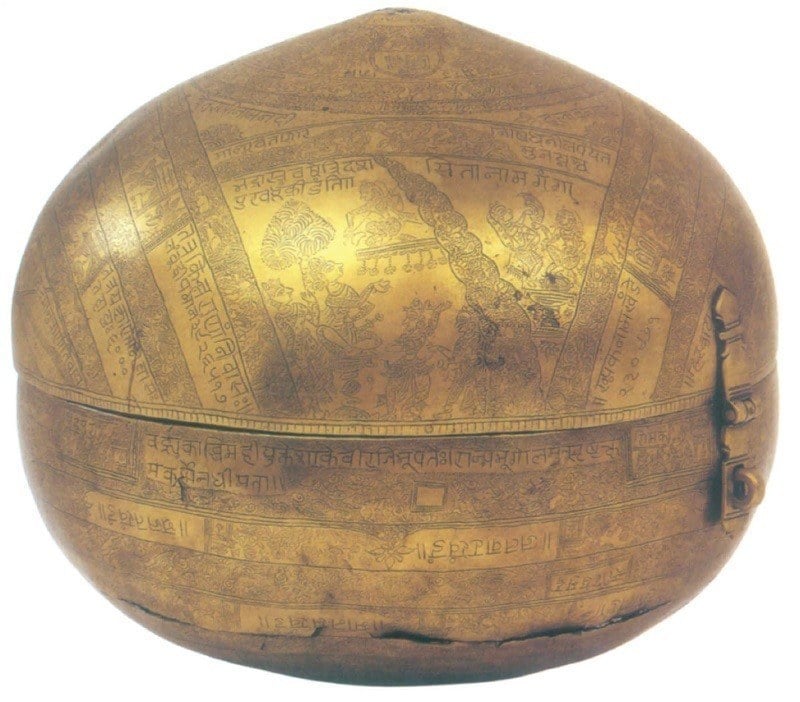 This 1571 globe from western India doubles as an engraved brass container that nevertheless features the entire northern and southern hemispheres as accurately any other maps from that era. 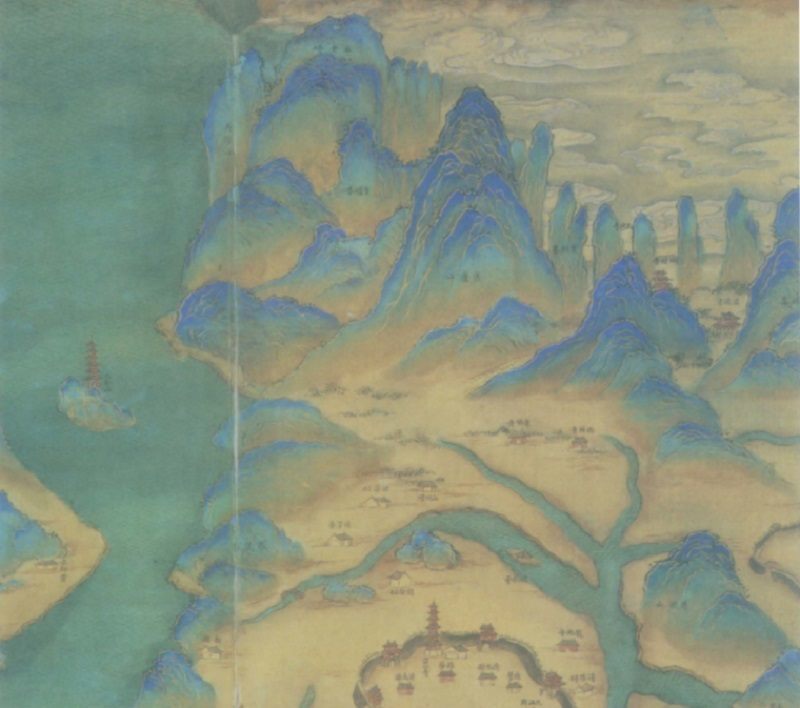 This detail from a 1700s map of China’s Jiangxi Province shows off stunningly blue mountain peaks. 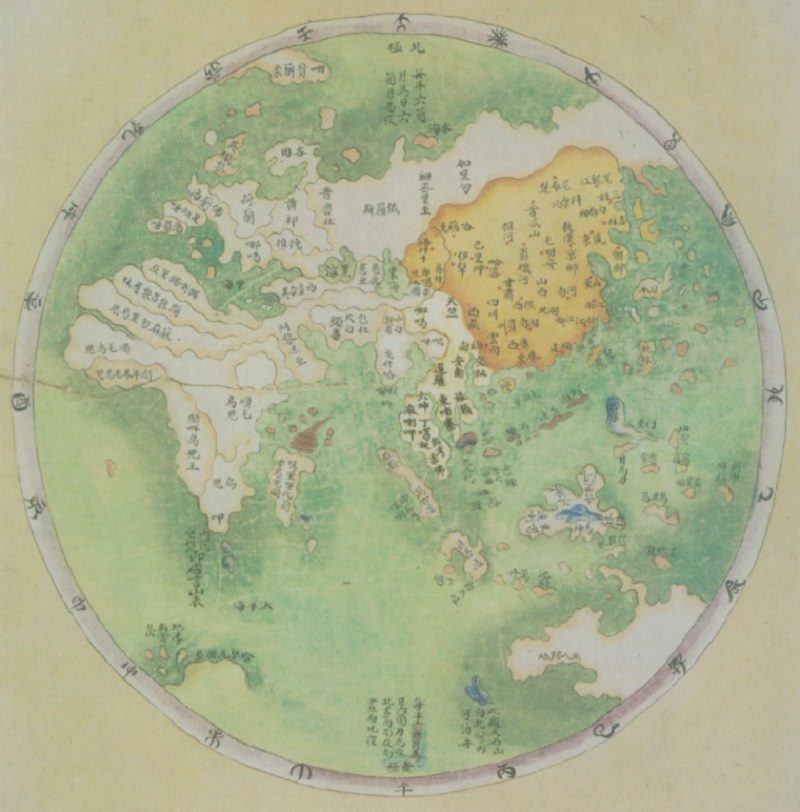 Created in China in the 1790s, this map captures the entire Eastern hemisphere. 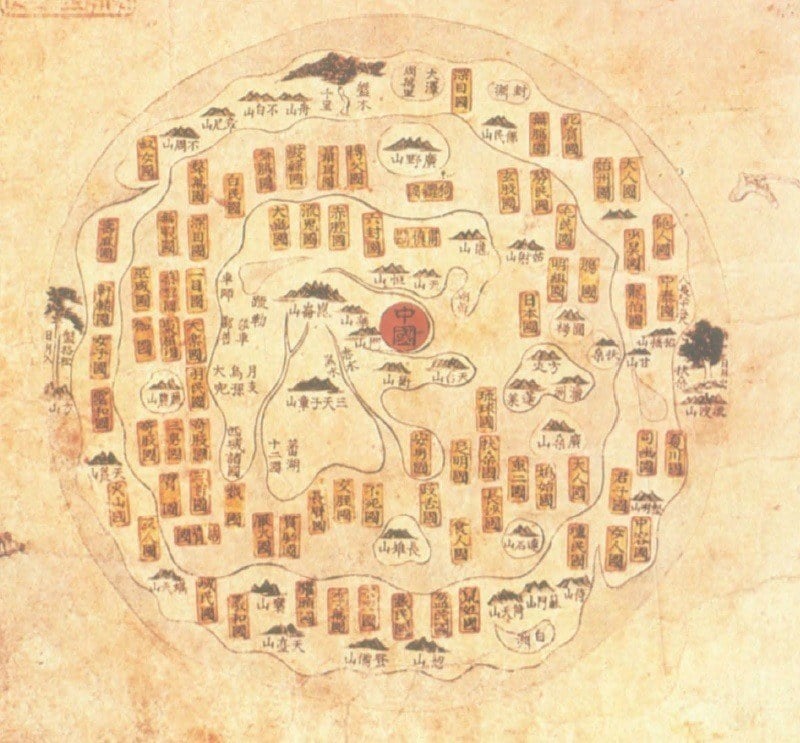 This mid-1700s Chinese map of the world features an inner continent surrounded by a sea holding fantasy lands and mountains, themselves surrounded by a fictional outer ring of land. The trees to the far east and west mark the areas from which the sun and moon were assumed to rise and set. Data on the mythical lands was drawn from the Shanhai jing, a collection of Chinese myths and fables dating back to the 4th century B.C. 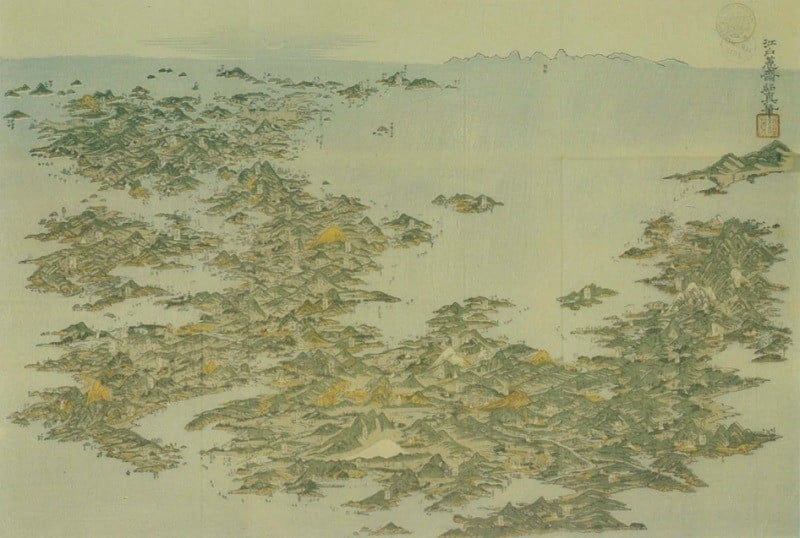 Artist Kuwagata Keisai was the first to paint an aerial view of Japan, as seen in this 1804 map. 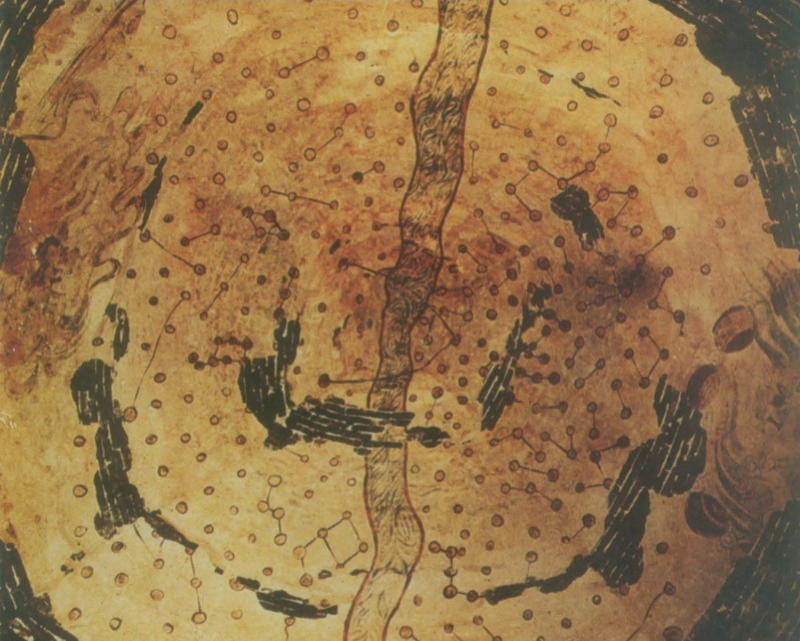 This ancient map charting constellations amid the Milky Way is notable for its medium: It forms the ceiling of a Chinese tomb from the 4-6th century Northern Wei dynasty. It’s also the earliest surviving portrayal of the entire breadth of the visible sky. 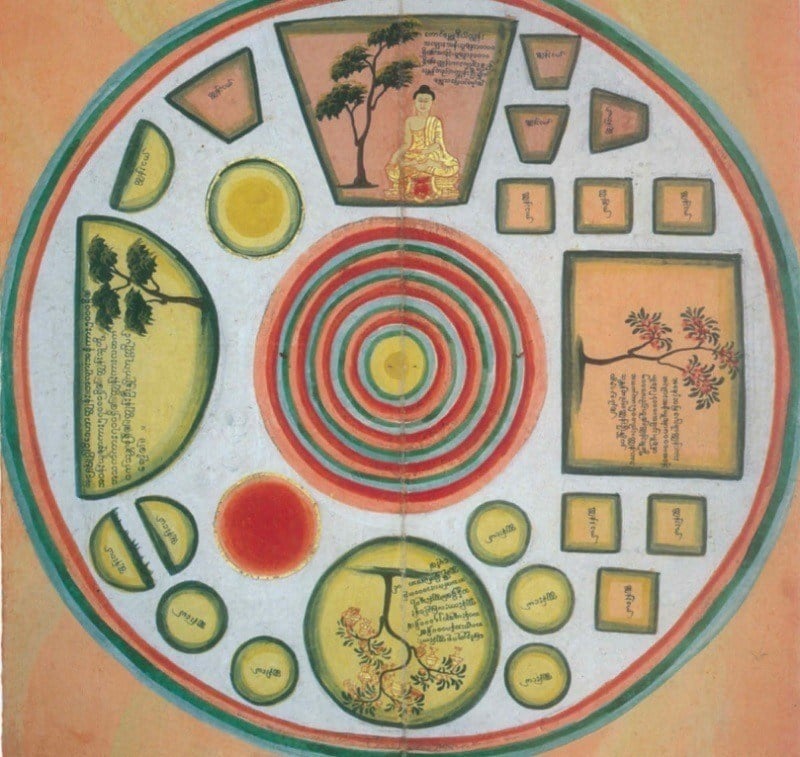 This late-1800s Burmese painting depicts the entire universe. The large shapes are continents, the smaller ones are sub-continents, and the whole scene is capped with a rainbow-colored rim surrounding the universe itself. Like all cosmological maps, this one relies on heavy speculation that blurs the line between science and myth. 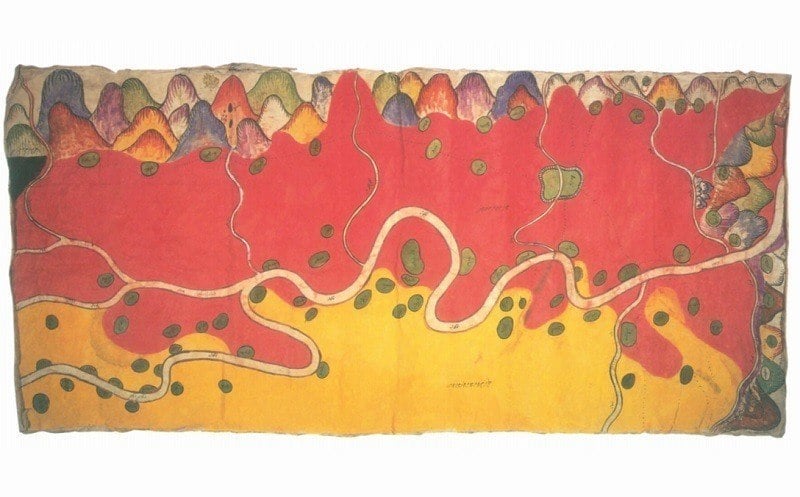 This 1889 map of the Nam Mao River covers a border dispute between China (in bright tempura red) and Burma (in yellow). According to The History of Cartography, the details are “remarkably accurate.” 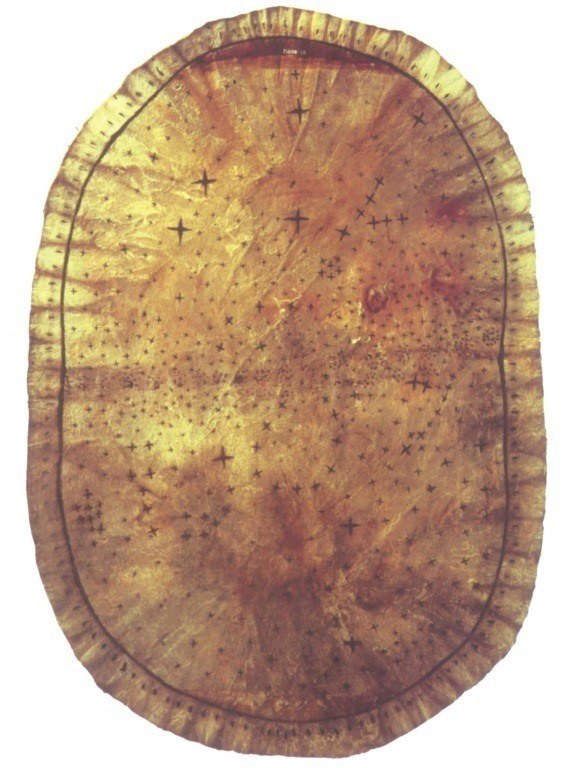 Skiri Native Americans created this star chart on a tanned antelope hide or deerskin, found Pawnee, Oklahoma, in 1906. That row of small dots across the middle represents the Milky Way, which was thought to be a path used by departing spirits. 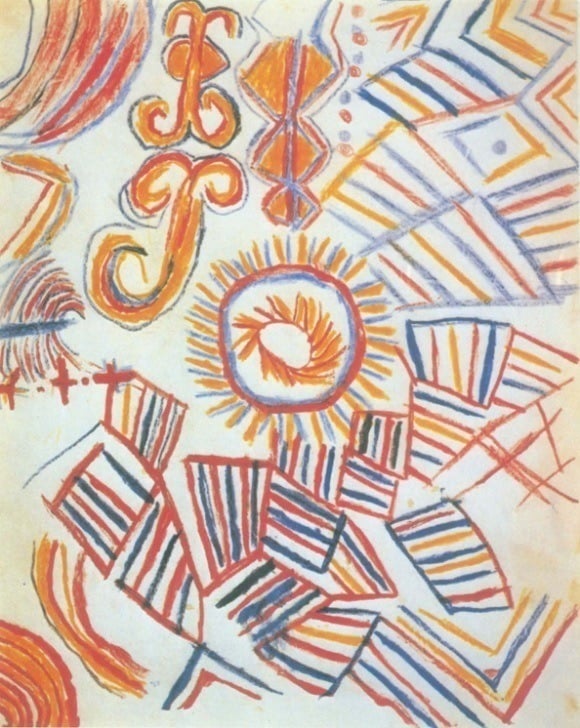 This diagram maps fertility on a cosmic scale, as depicted by a member of the Tucano people, a group indigenous to South America. The coded map is designed to highlight the natural order of the world, as understood by the Tucano. 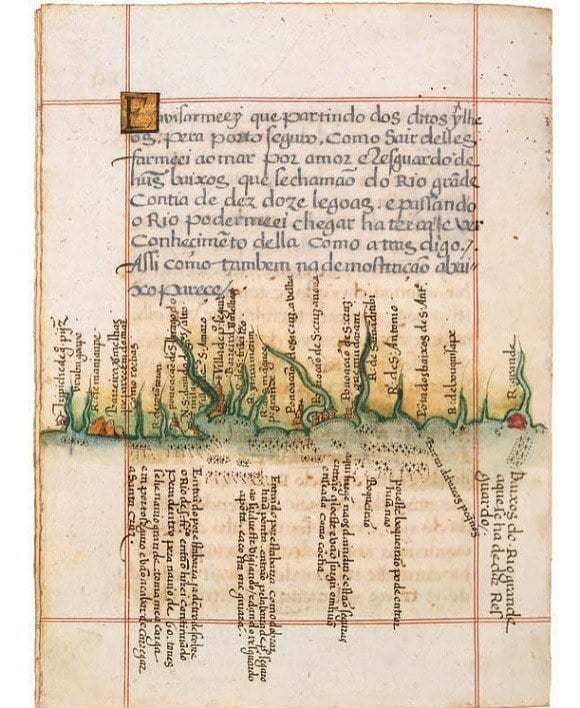 The Brazilian coastline is mapped out on this page, which also provides handy guidelines on how to enter and leave sea ports. It’s from a Portuguese roteiro, or nautical guide, and depicts the coast near Porto Seguro, where explorer Pedro Álvares Cabral first reached South America in 1500. 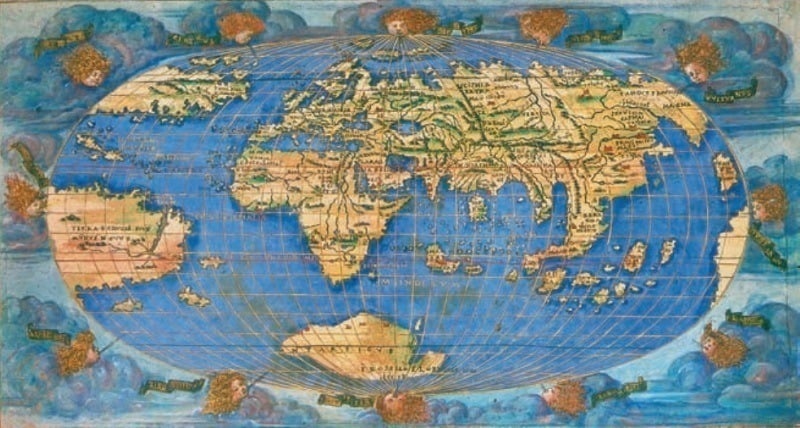 One of just two known colored editions, this 1508 copy of Francesco Rosselli’s Oval World Map was one of the first to incorporate the Americas following Christopher Columbus' voyages. 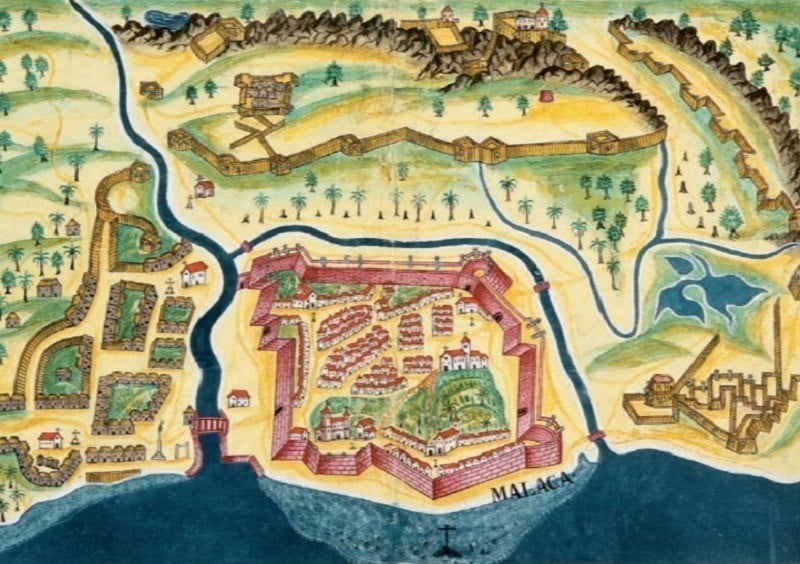 This scene of the Fortress of Malacca comes from António Bocarro’s 1635 O Livro Das Plantas, a military map book for Portuguese India. 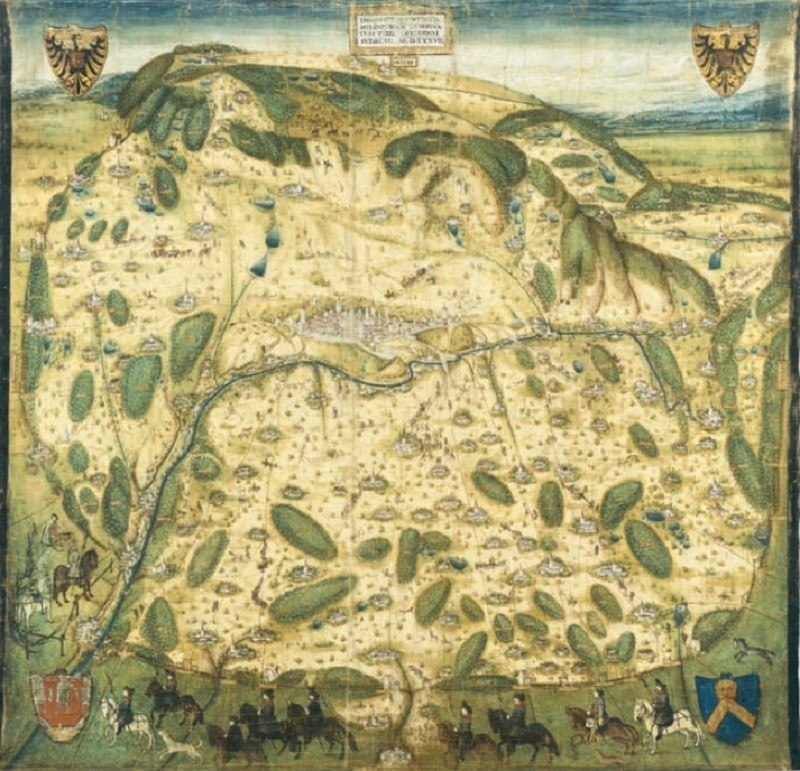 This aerial 1537 map of the city of Rothenburg ob der Tauber (in modern-day Germany) adds elements of landscape painting to the usual cartography.

This heart-shaped Earth in this 1536 watercolor-and-wood-engraving by French cartographer Oronce Fine isn’t entirely accurate: He included a massive southern continent, Terra Australis, which was hypothesized to counterbalance the northern continents. 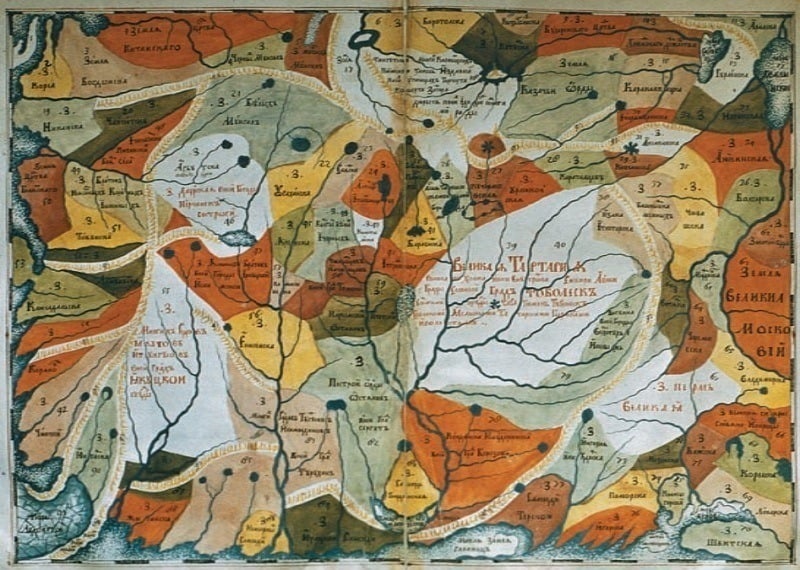 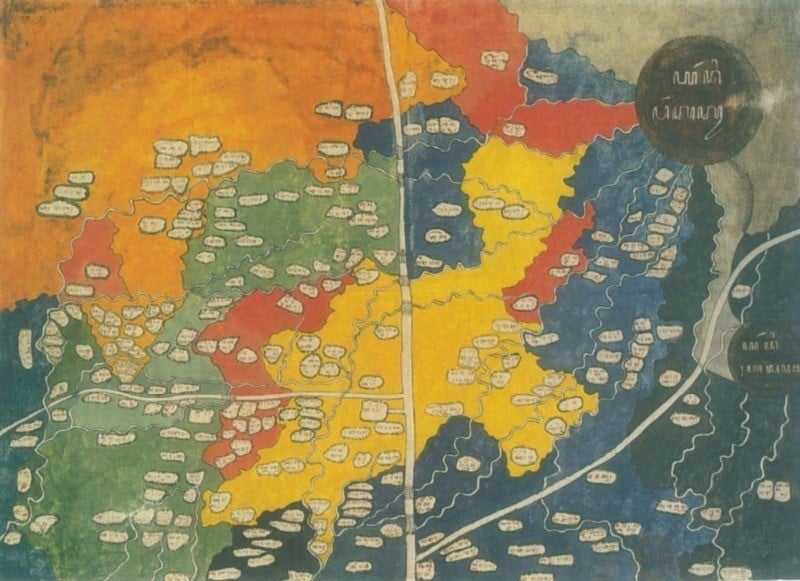 This mid-1800s map of central Java, Indonesia is presumed to be of Dutch origin, designed to track revenue and labor. The two dark circles to the right denote volcanoes.

All maps sourced from The University of Chicago's History of Cartography.

For more illuminating maps, check out our collection of U.S. census maps to upend your assumptions about our country as well as these 33 maps that explain the U.S. better than any textbook.