From the true size of Africa to the countries that refuse to use the metric system, these maps will make you see our world in a whole new light. 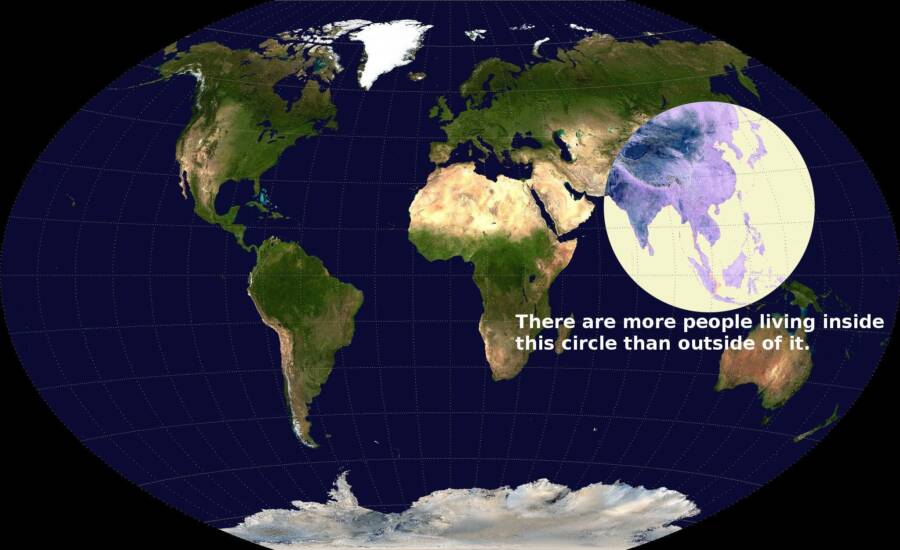 There are nearly 8 billion people living in the world, but the Earth's population is far from evenly distributed. Countries like China and India house a lot more people than others, each boasting a population of more than 1 billion each. This can be hard to visualize — until now.

This map shows the surprisingly small region where many of the world's people live.valeripieris/Reddit

You're looking at the only three countries in the world that don't use the metric system: the United States, Myanmar, and Liberia. While some believe that the U.S. should ditch the imperial system, others claim that making the switch to metric now would cost too much money.

Back in 2009, NASA said that converting its engineering plans, software, and hardware to the metric system would cost $370 million — and that's just one agency.Digg 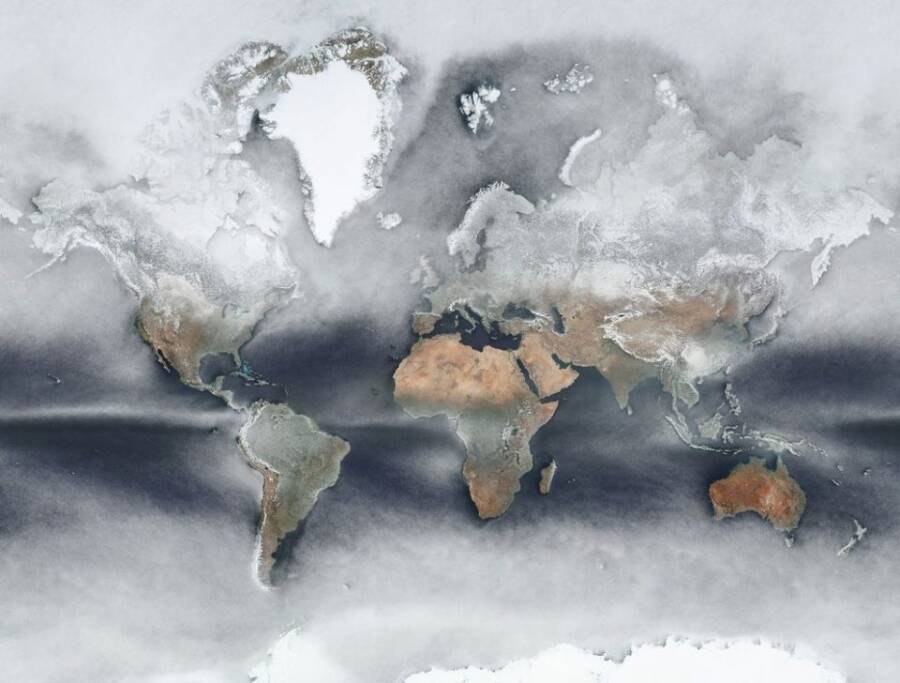 Which areas of the world see the most clouds — and which regions see the fewest?

This map shows the average cloud cover around the world. At any given time, around two-thirds of the Earth's surface is covered by clouds.Johannes Kroeger 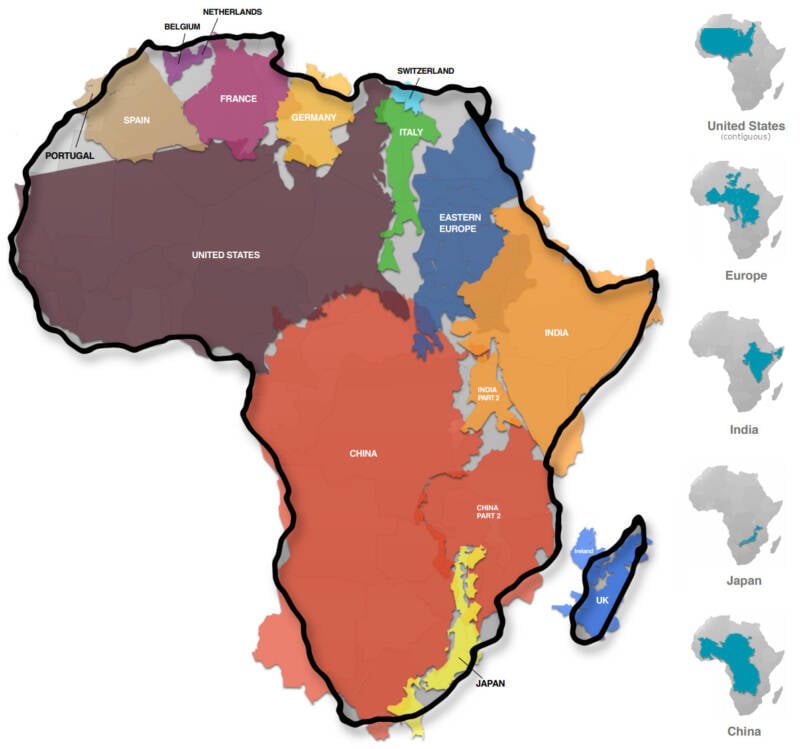 Most world maps make Africa look smaller than it actually is. The famous Mercator projection, for example, minimizes the size of territories near the equator, including several countries in Africa.

In reality, the continent is large enough to fit the contiguous United States, China, India, Japan, and several European countries within its borders.Kai Krause

Which streets has Google mapped around the world — and which places don't offer Street View?

This map shows the heavy concentration of Google Street View in Europe and the U.S. By contrast, hardly any streets in Africa (outside of South Africa) appear on Google Street View — and the same goes for much of Asia.Baubauciaociao/Reddit 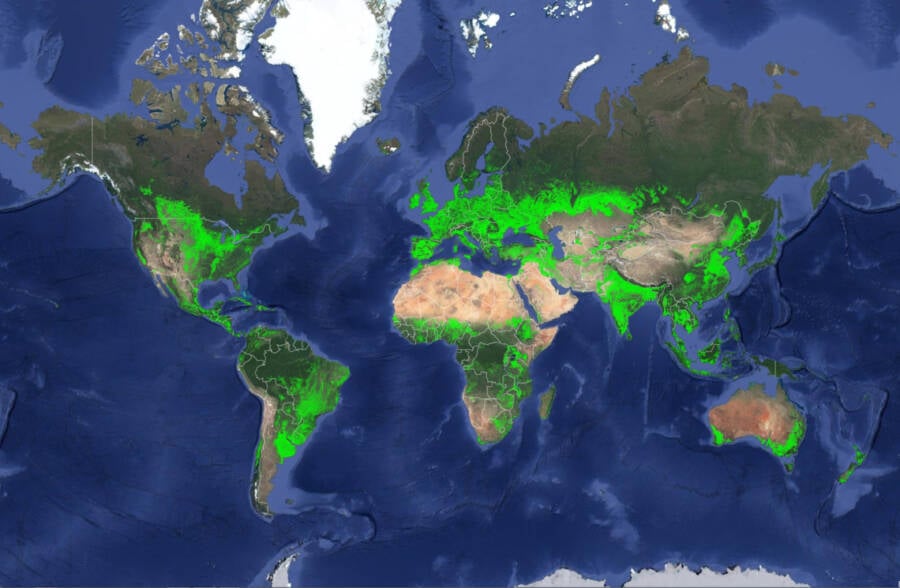 Crops grow well in certain regions, but not so well in others. This map shows the crop coverage around the world, revealing where most of our grains, fruits, and vegetables are grown. The countries that produce the most crops include China, the U.S., India, and Brazil.USGS

The U.S. stands out as one of the only countries in the world with no federal paid maternity leave.NPR 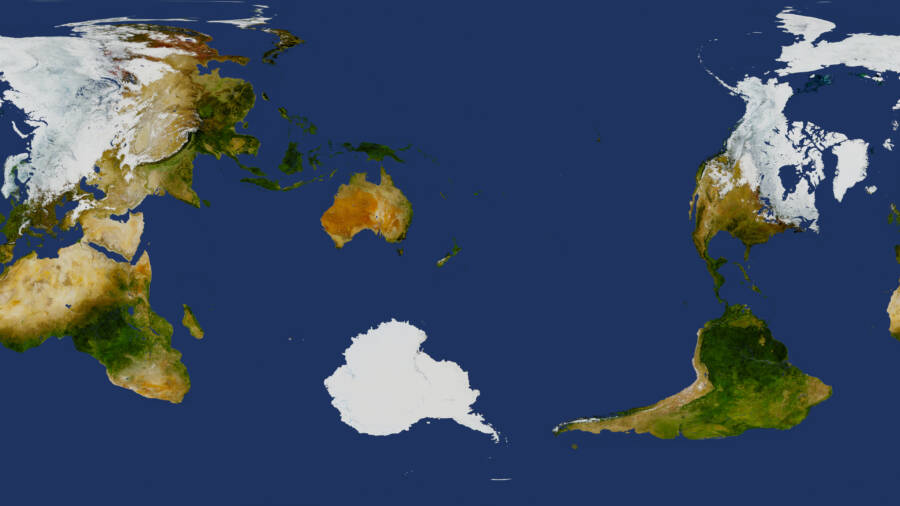 Most flat world maps place the Atlantic Ocean in the middle. But what would the world look like with New Zealand at the center of the map? 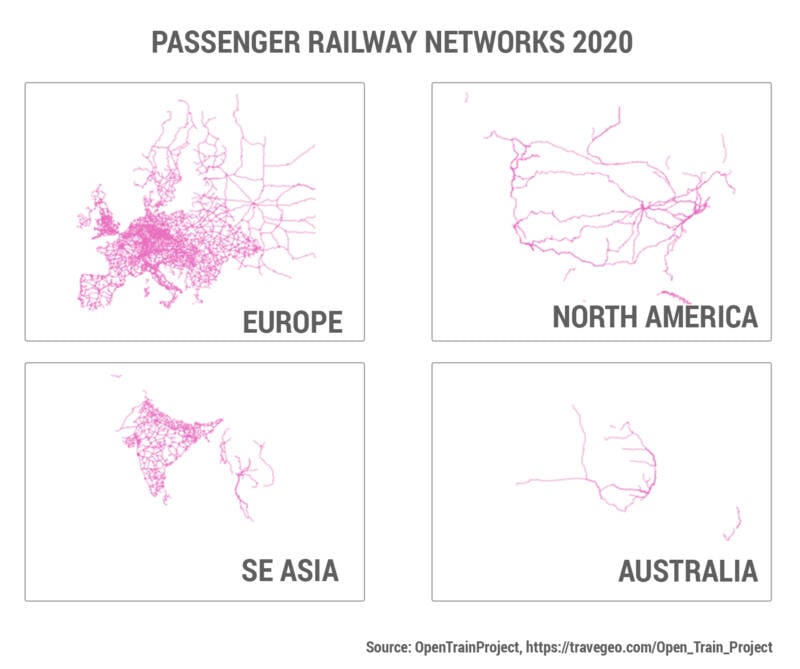 In other areas, passenger railway lines are uncommon. This map highlights railway networks in four regions.OpenTrainProject

Communist And Socialist Countries In The Late 1970s 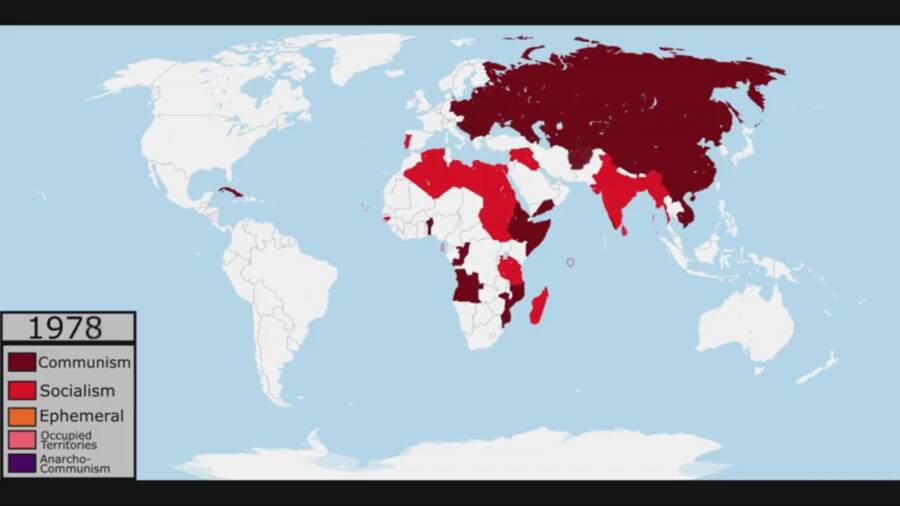 The fear of Communism drove much of U.S. foreign policy in the years after World War II. Supporters of a containment policy often pushed for war in Korea and Vietnam in order to stop the spread of Communism.

This map shows the large number of Communist and socialist countries in 1978. SBG99DesiMonster/Reddit 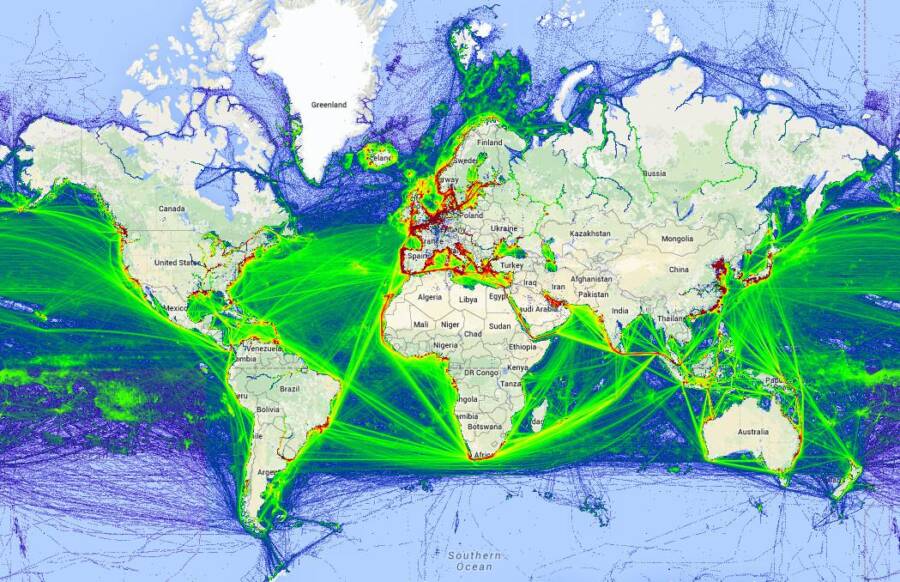 More than 90 percent of the world's trade is carried across the oceans by some 90,000 ships. As shown by this map of ship traffic around the globe, this industry covers a shockingly large portion of the world's water.

Like some other forms of transportation, these ships are a significant source of carbon dioxide emissions. But unlike other methods of transport, the shipping industry is almost completely unregulated — which can lead to massive amounts of pollution.MarineTraffic 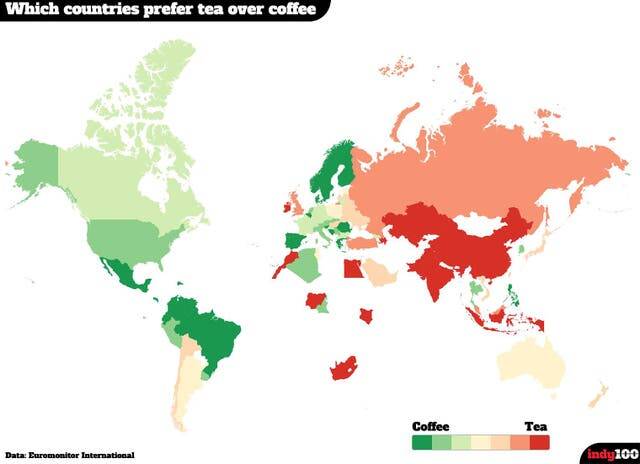 While much of the Western hemisphere sips coffee, most Asian countries strongly prefer tea. In fact, China, India, and Sri Lanka rank as some of the top tea-producing countries in the world. The Economist 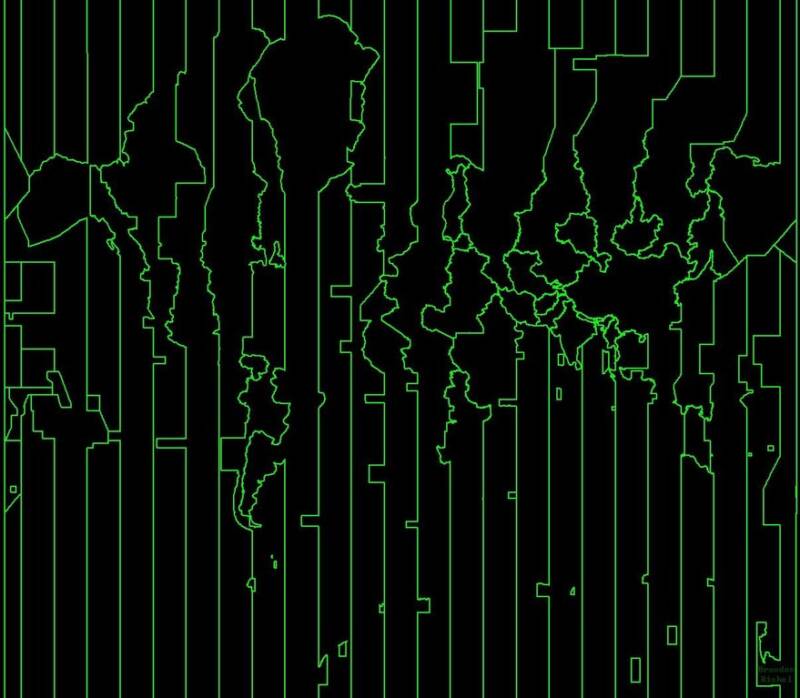 What would the world look like if you took away the continents, oceans, and other geographic features — and left only the time zone lines?

Time zones date back to the 1884 International Meridian Conference, which was held in Washington, D.C. However, it took years for all nations to get on board with the idea, and many countries have made changes to their local time zones throughout the centuries.Branden Rishel

WHO reports that over 2 billion people around the world do not have reliable access to safe drinking water — a problem that will likely grow as time goes on.

This map shows the overall water risk for different regions of the world, with low-risk areas in light yellow and high-risk areas in dark red.Gassers/World Resource Institute 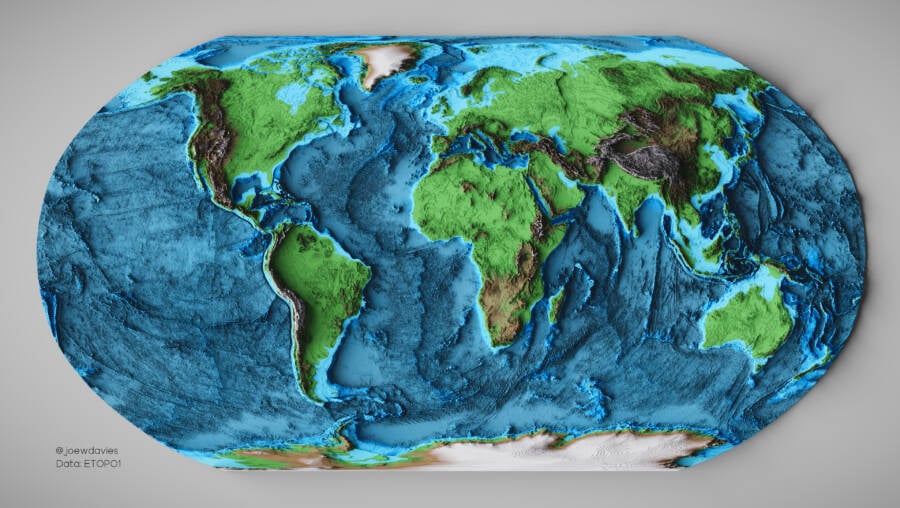 Elevations vary across the globe — and not just on land. This map shows the world's most striking elevations, from the towering Himalayas to the Mid-Atlantic Ridge.

The highest elevation on land is Mount Everest at about 29,000 feet. And the deepest point in the sea — the Challenger Deep — is about 36,000 feet below sea level.Reddit

The "Most Accurate" World Map

Most flat world maps severely distort the globe. They shrink the size of Africa, narrow the width of the Pacific Ocean, and make Antarctica and Greenland look huge.

In response to these wildly inaccurate and misleading maps, a Japanese architect named Hajime Narukawa came up with an innovative solution: triangles. Dividing the spherical surface of the world into 96 triangular regions, Narukawa mapped out those regions on a flat, rectangular surface while still maintaining their original area ratios.

Though the resulting AuthaGraph World Map still isn't perfect, it's said to offer the "most accurate view yet" of what our world actually looks like.AuthaGraph 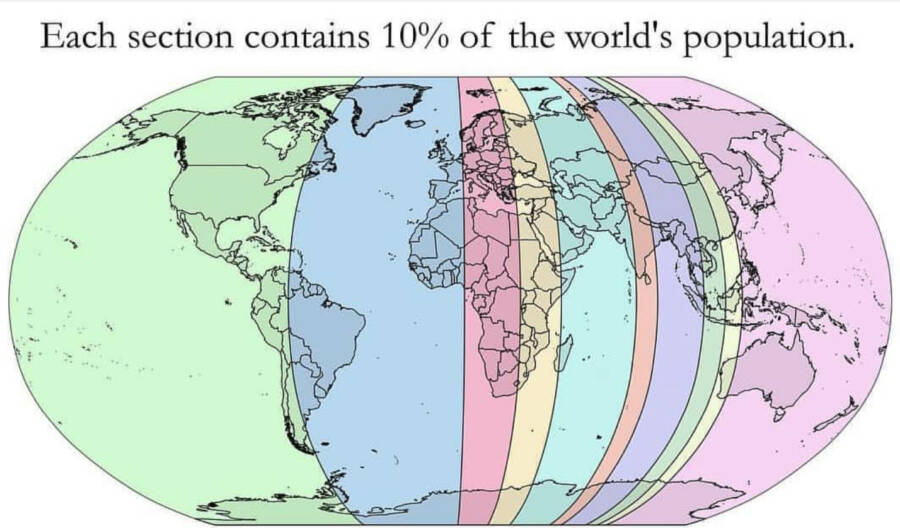 It's well known that a large number of the world's population lives in countries like China and India, but how is the rest of the population spread out?

This map divides the globe into 10 wedges, each of which represents 10 percent of the total population.JamesGeo

Map Of The World's Ports 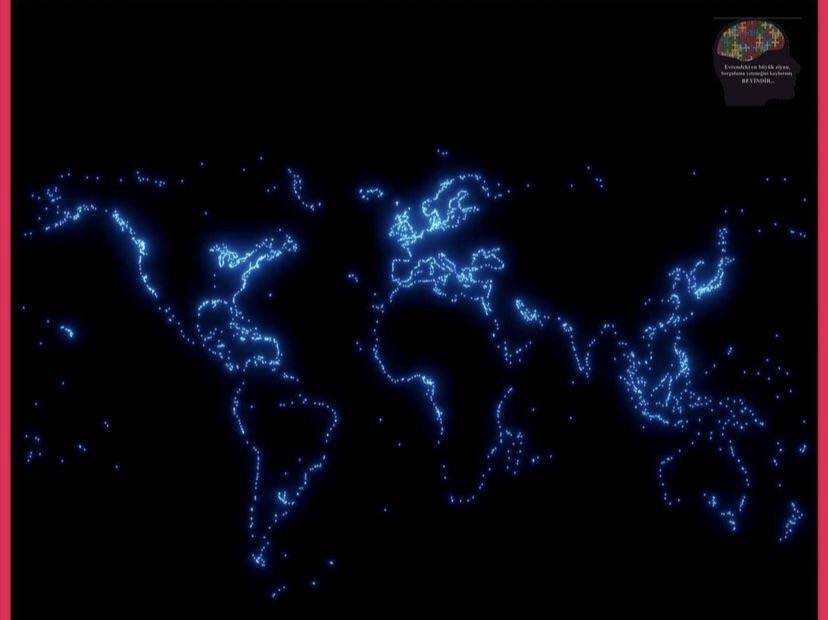 Ports keep the world connected. In fact, 70 percent of global trade by value passes through a port.

This map shows the location of every port in the world. tusu111/Reddit 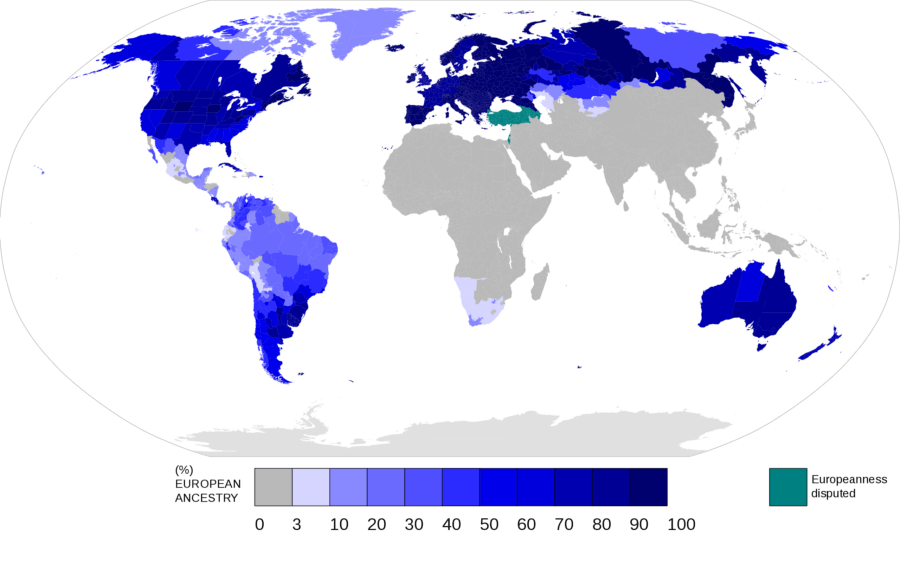 Where do people with the most European ancestry live? This map shows the percentage of people around the world that trace their heritage back to Europe.

Unsurprisingly, former European colonies often report high percentages of people with European ancestry, as shown in the darker shades on the map. But Africa — which was heavily colonized by European countries in the 19th and early 20th centuries — represents a major exception. Nagihuin/Wikimedia Commons 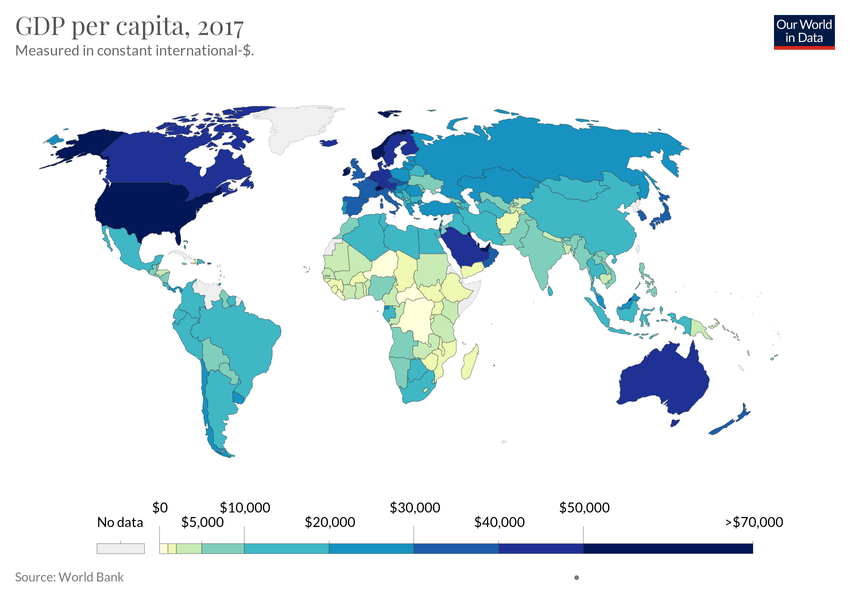 On this map, darker colors indicate a larger gross domestic product (GDP) per capita. The richest countries in the world report a GDP of over $50,000. The poorest, by contrast, report well under $5,000.OurWorldInData

Our planet supports nearly 8 billion people. But while some countries report negative population growth, others have a positive growth rate. 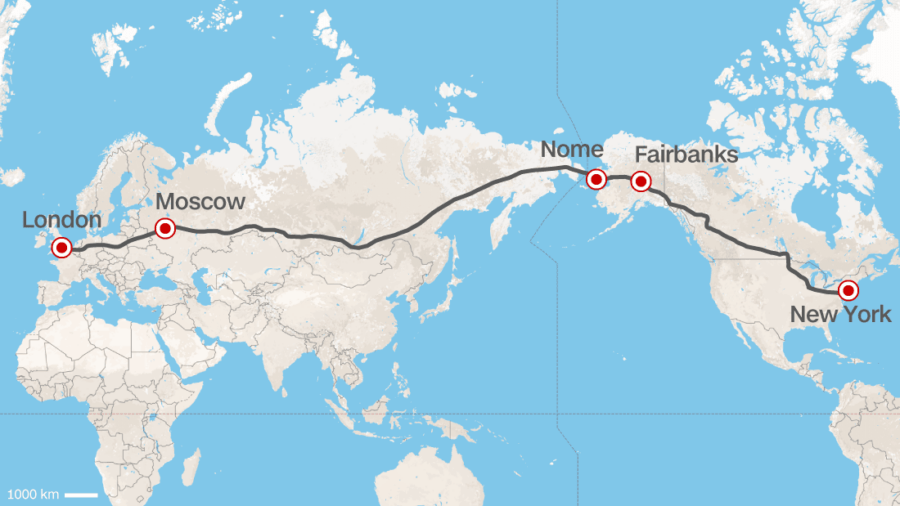 What if you could drive from London to New York — the long way?

In 2015, the president of Russian Railways proposed a "superhighway" that would connect North America to Asia and Europe. If this idea ever took off, it would reportedly cost "trillions of dollars" to build and would span almost 13,000 miles.CNN

What would the world look like measured by tree height?

Forests grow to different heights around the world. As the map shows, equatorial rainforests report some of the highest forest canopies, as do subarctic forests. These forests help absorb carbon dioxide and release oxygen into the atmosphere. They also play a role in biodiversity.Global Forest Watch 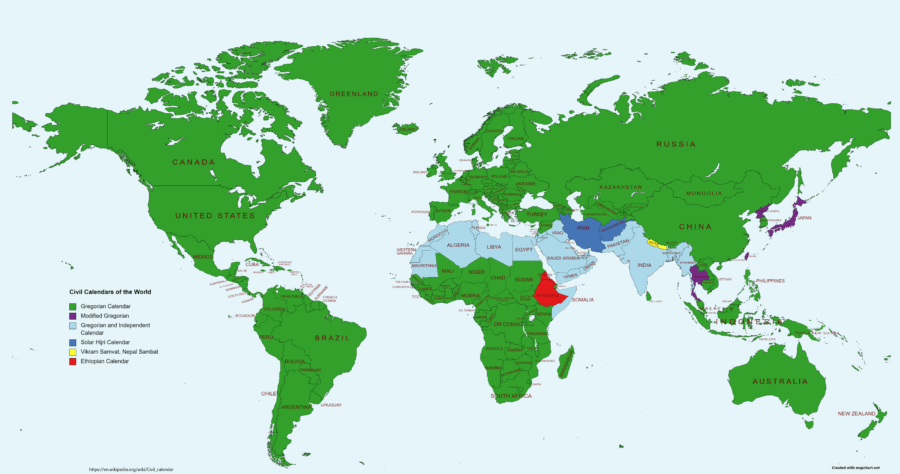 Snow Around The World

Which parts of the world are most likely to see snow each year — and where does it never snow?

World War I was truly a global war. Many countries around the world saw high casualty numbers, especially since the war ended with around 40 million casualties total. 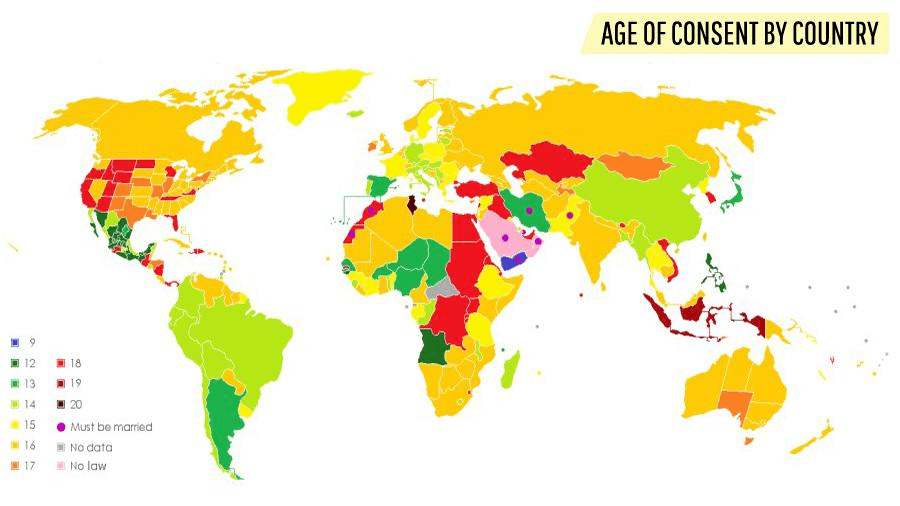 This map shows the wide variety of age of consent laws around the world.

Shockingly, some countries claim that children as young as 12 or 13 can consent to sex. Meanwhile, other countries define consenting adults as those who are at least 19 or 20 years old. Yet other places simply require people to be married before they have sex — and sometimes have no age limit at all.Wikimedia Commons 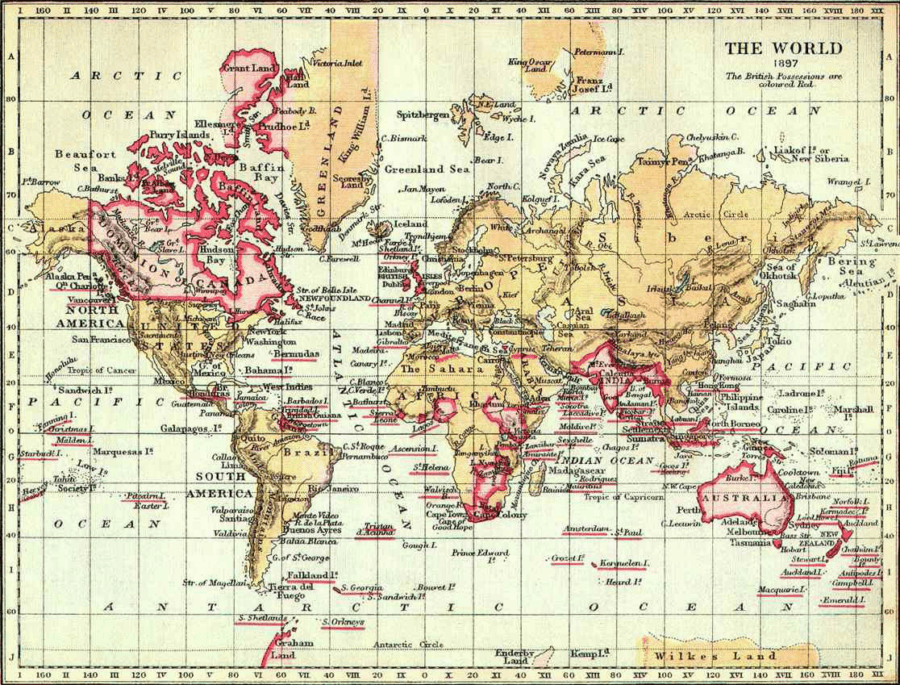 In 1897, the U.K. controlled several territories all around the globe. This map shows the British-controlled territories in red. It's little wonder why there was once an old saying that claimed: "The sun never sets on the British Empire."

The empire reached its height in 1922, when it covered nearly a quarter of the world's land surface. The empire's legacy shapes modern politics into the 21st century. Cambridge University Library

When The World's Population First Hit One Billion 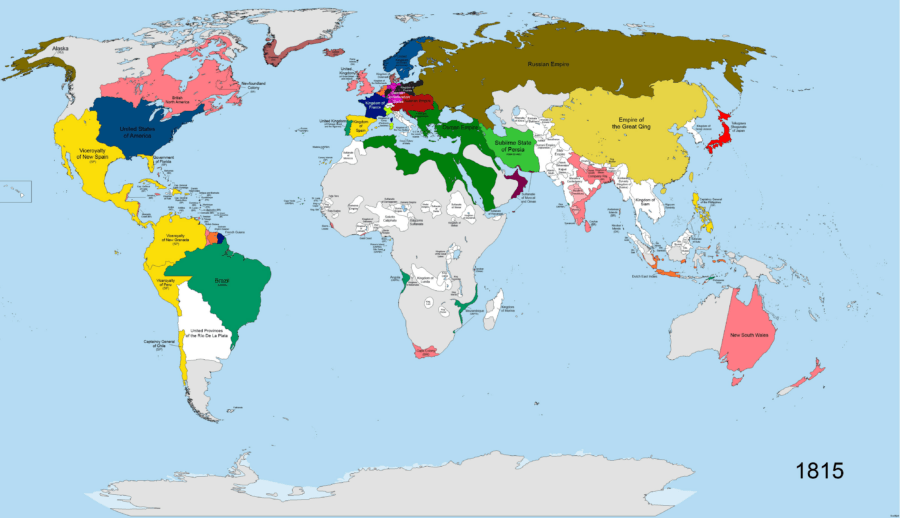 What did the world look like the first time Earth's population hit one billion?

This map shows the national boundaries of the world when the global population crossed the one billion mark during the early 19th century.

Some national borders look familiar. Much of Europe looks like a 21st-century map, and the borders of Russia and China are likewise very similar. But Africa and the Americas look quite different.SvoHljott/Wikimedia Commons 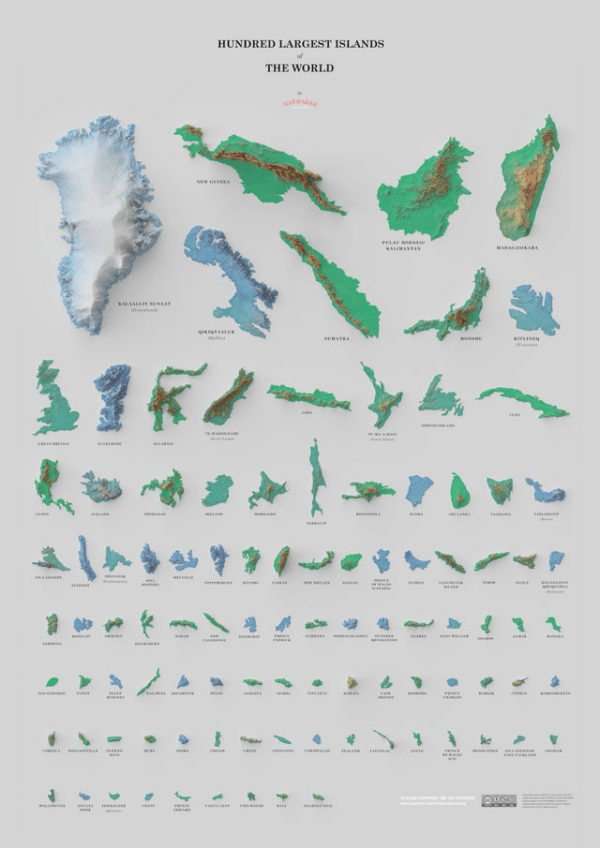 In addition to the seven continents, Earth is home to countless islands. This chart shows the 100 largest islands by size (not counting the continents).

Greenland ranks at the top of the list. New Guinea, Madagascar, and Baffin Island also rank in the top 10. David Garcia 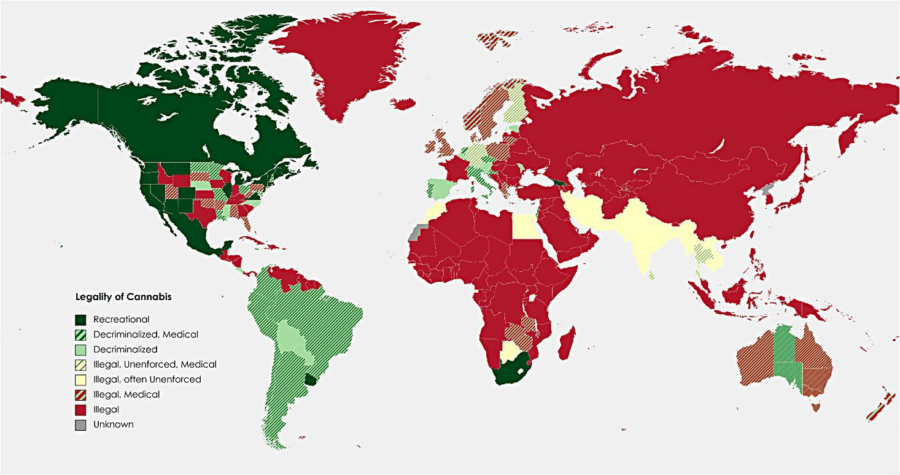 This map charts the countries, states, and territories around the world that have legalized marijuana, the regions that still classify it as an illegal substance, and those areas where the situation is a bit more complicated.

For example, in the United States alone, some states have completely legalized cannabis, while others have only decriminalized it for medical use. Yet others have still maintained a complete ban on marijuana in all cases.Reddit 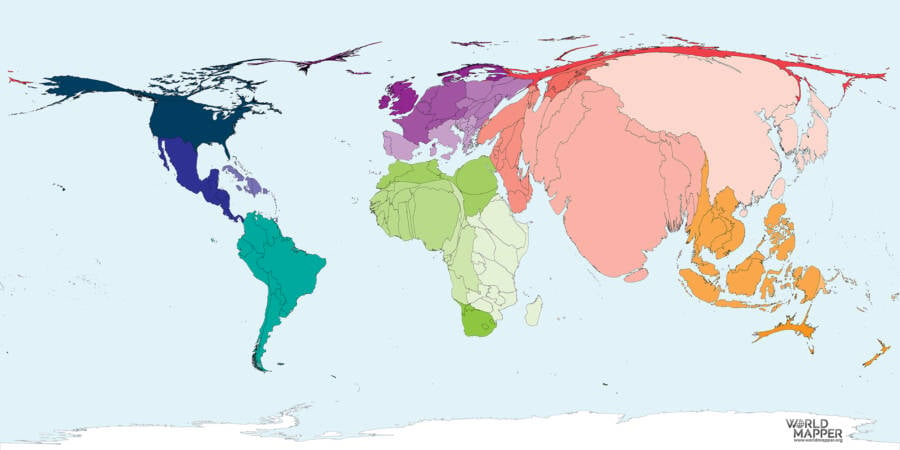 What if a map of the world represented the population of every country?

This weighted population map shows what the Earth might look like if each country's physical size was proportional to its population.

When it comes to population, China and India rank at the top of the list. The U.S., Indonesia, and Pakistan rank behind them — looking quite small in comparison. WorldMapper

Religions Around The World 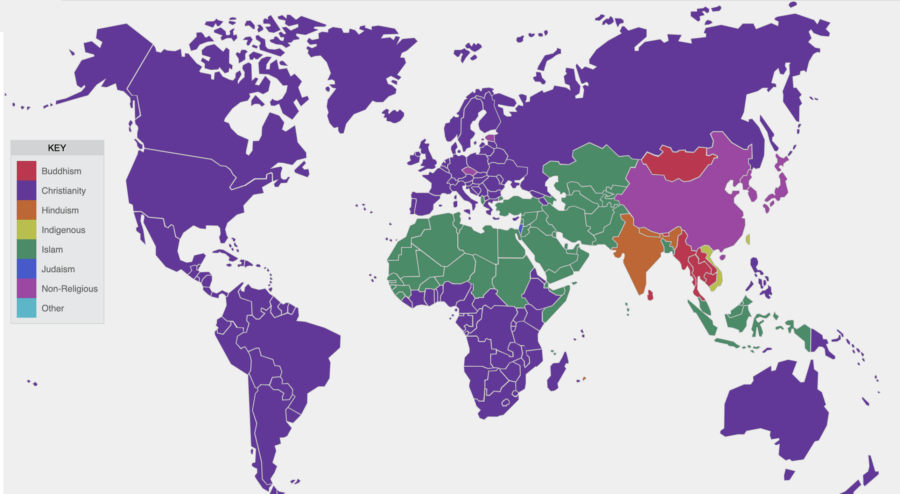 Charting dominant religions by country rather than by population, as this map does, gives another perspective on world religions. The dark purple areas represent predominantly Christian countries, while green represents predominantly Muslim countries and orange shows countries where most people practice Hinduism.

Which countries prefer tea over coffee? How many countries use the Gregorian calendar? And which countries saw the most casualties during World War I? These maps offer a unique perspective on our planet and its past. From the true size of Africa to the age of consent around the world, these are the maps that they didn't show you in school.

There's no question that more traditional maps — like the Mercator projection — remain popular to this day. But it's now known that some of the most famous illustrations of the world are misleading at best. That's why it's worthwhile to explore other maps and their striking revelations.

What did the world's national borders look like when the human population first hit one billion? How many countries still reject the metric system? And what would a 13,000-mile highway that stretches from New York to London look like? These 33 world maps are sure to change your perspective.

After looking through these unique maps, check out these maps that explain the United States. Then, travel back in time with these ancient world maps.