The Craziest Andre The Giant Drinking Stories, From $40,000 Bar Tabs To 156 Beers In One Sitting

Standing 7 feet and 4 inches tall and weighing 550 pounds, Andre the Giant possessed a superhuman ability to consume massive amounts of alcohol that would kill anyone else.

André René Roussimoff was known as many things: Andre the Giant, the Eighth Wonder of the World, WWF Champion, to name a few. But he had another claim to fame: “The Greatest Drunk on Earth.”

In the 1970s and 1980s, the French-born pro wrestler was mostly famous for his size and for his skills inside the ring. But at the time, not everyone knew that he was able to down several bottles of wine before a match — and it wouldn’t affect his performance at all. 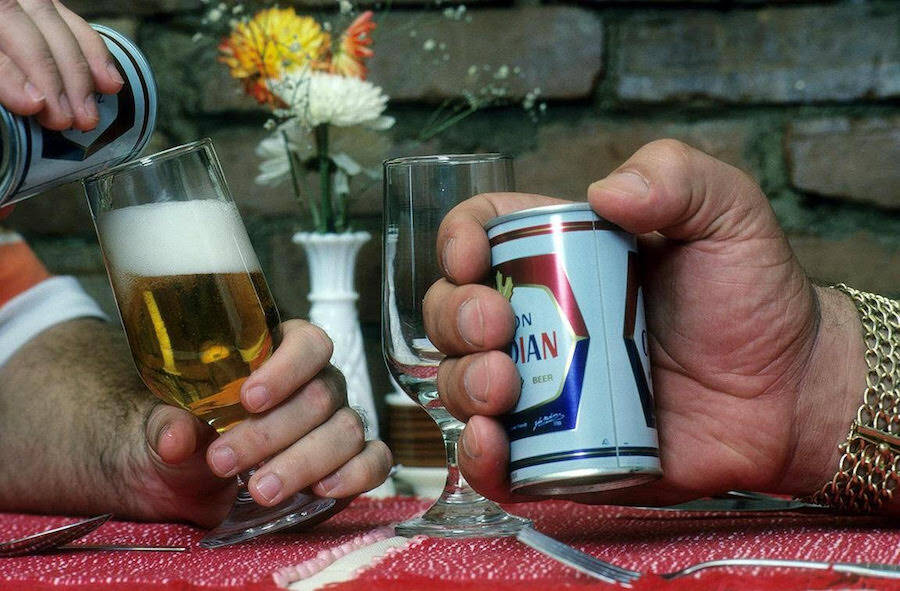 HBOAndre the Giant drinking with a friend. The pro wrestler’s hand was so big that it made a beer can look miniscule.

Standing 7 feet and 4 inches tall and weighing 550 pounds, Andre the Giant’s immense size meant that he had a superhuman ability to consume vast amounts of alcohol that would kill anyone else. His size was the result of gigantism — excessive growth due to a hormonal imbalance — and he admitted it wasn’t easy being a big man in a small world.

But as he once said, “What God gave me, I use it to make a living.” So it’s not surprising that he wanted to have a little fun whenever he wasn’t working. He was more than happy to show off his drinking abilities to his friends — who often watched in amazement and disbelief.

From $40,000 bar tabs to 156 beers in one sitting, these are the wildest Andre the Giant drinking stories of all time.

Drinking With Andre The Giant 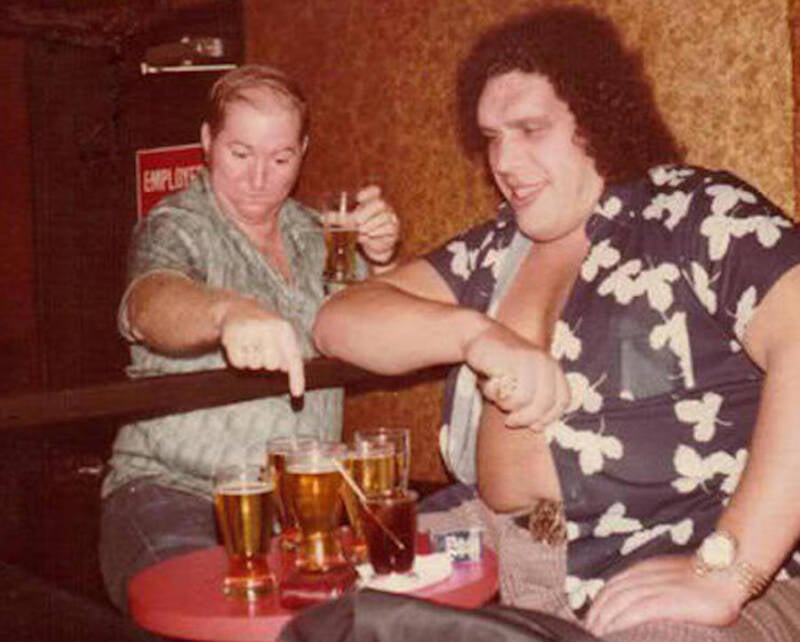 HBOSome wrestlers drank about six beers after their matches, but Andre the Giant enjoyed a minimum of 24.

Though Andre the Giant’s stature was the main reason why he became famous, the condition that made him so big gave him intense joint pain. To ease his discomfort, Andre would often drink copious amounts of booze.

Fellow wrestling legend Ric Flair recalled one time when he flew with Andre and had more than just a few drinks on the flight.

It’s probably safe to say that Andre did most of the drinking.

Andre’s friends talk about his drinking habits in the 2018 HBO documentary film Andre the Giant.

In another incident, Andre called his buddy Hulk Hogan to join him for a drink when he was stuck on a layover at an airport that was 15 minutes from Hogan’s mother’s house in Tampa.

“So I drive over the airport and I met him at the Delta Crown Lounge,” Hogan said. “By the time we sat down we had about 45 minutes before he had to walk to the next gate. He drank 108 12-ounce beers.”

While that amount may sound unfathomable to most people — especially in that timeframe — Hogan pointed out that a typical can of beer was tiny from Andre’s perspective. He said, “You’ve got to realize that a 12-ounce beer he can put in his hand and hide it. You can’t see the beer in his hand.” 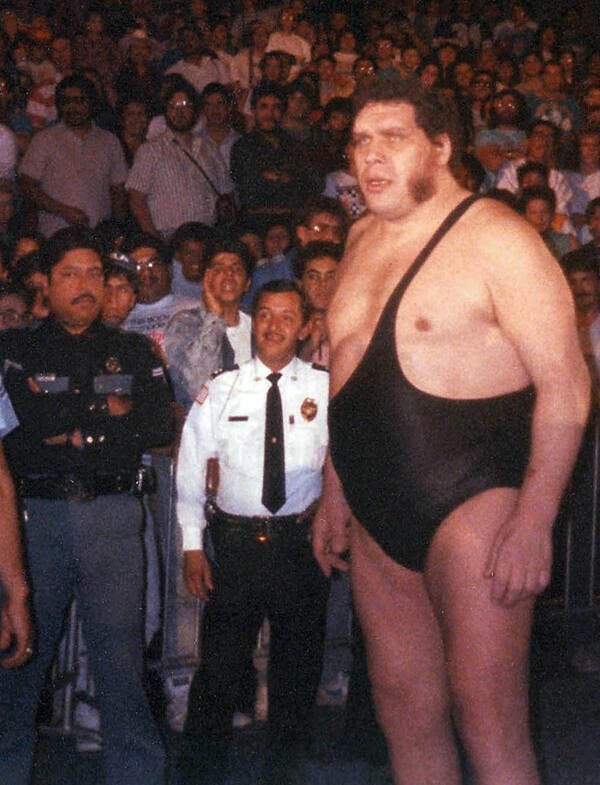 Wikimedia CommonsAndre the Giant in the late 1980s. Like many wrestlers, he was known for his showmanship in the ring.

Then there was the time when fellow WWF wrestlers Mike Graham and Dusty Rhodes watched in awe as Andre drank 156 beers in one sitting. That’s 14.6 gallons of beer. The average human stomach can only hold about a liter.

Such feats of drinking earned him the title of “The Greatest Drunk on Earth” from the humor magazine American Drunkard.

Indeed, Andre’s tolerance was so strong that he was able to down several bottles of wine before heading to the squared circle.

“There are a lot of crazy stories about Andre that sound fake but most are true, especially his drinking,” said former wrestler Gerald Brisco. “Andre used to ask me to get him six bottles of Mateus wine and ice them down. He would drink those before we went to the ring and no one could tell.”

The Greatest Drunk On Earth 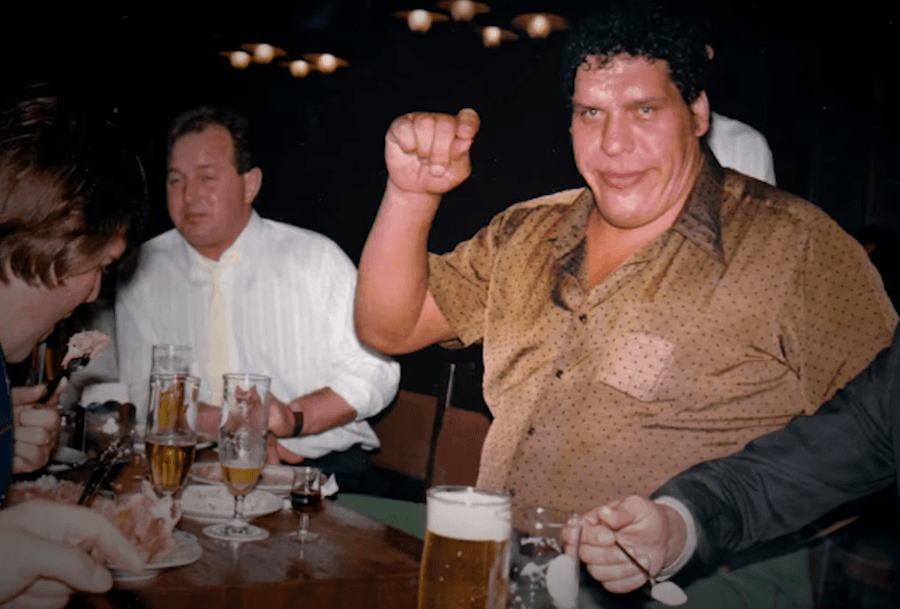 HBOAndre the Giant rarely appeared drunk while partying. But whenever he did get drunk, chaos ensued.

Despite how much Andre the Giant drank, he rarely appeared drunk or out of control. But when he did get drunk, the results could be disastrous.

Cary Elwes, Andre’s The Princess Bride co-star, recounted in his book how Andre the Giant once fell on a man waiting for a cab while he was drunk in New York City — and he seriously hurt him.

After that, Elwes says, the New York Police Department would tail Andre with undercover cops while he was in the city to avoid a repeat incident.

While the two of them worked on The Princess Bride in England and Ireland, Andre would frequently take the rest of the cast out for drinks. They’d try to keep up with him, which often meant massive hangovers abounded on set the next day. Meanwhile, Andre had no qualms about drinking excessively — and even got creative with some of his alcoholic concoctions. 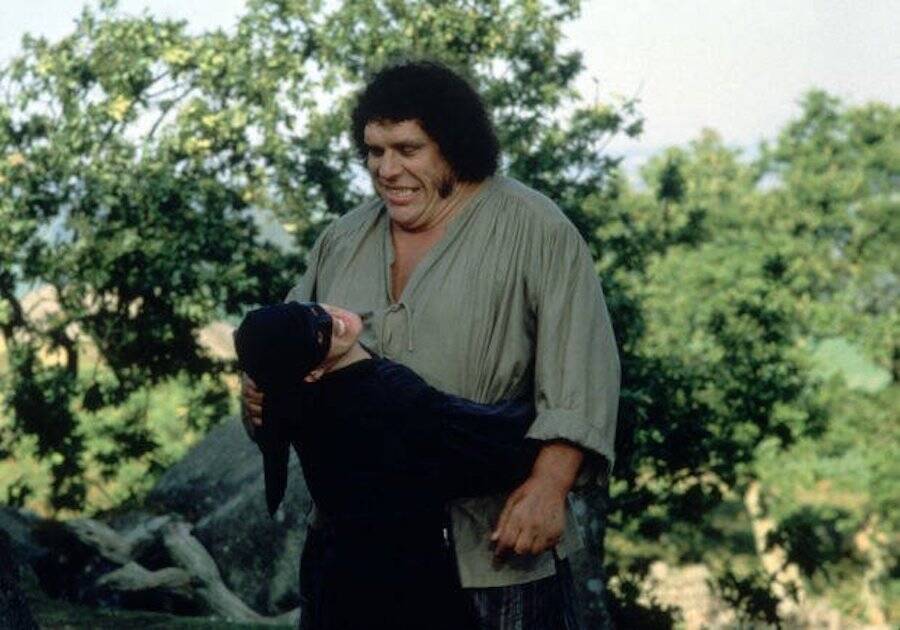 One of his favorite cocktails was called “The American” — and it consisted of 40 ounces of various liquors poured into a large pitcher. He would drink several of these pitchers in one sitting.

“I’ve never tasted airplane fuel,” said Elwes. “But I imagine it’s very close to what that must taste like. It’s very potent indeed, and I remember coughing a lot. But to him, it was like chugging water.”

According to Elwes, during a line reading for the film at a hotel, Andre ducked out to drink at the bar in the lobby.

After downing an enormous number of drinks, Andre attempted to walk back to his hotel room, before face-planting into the floor of the lobby and falling fast asleep. 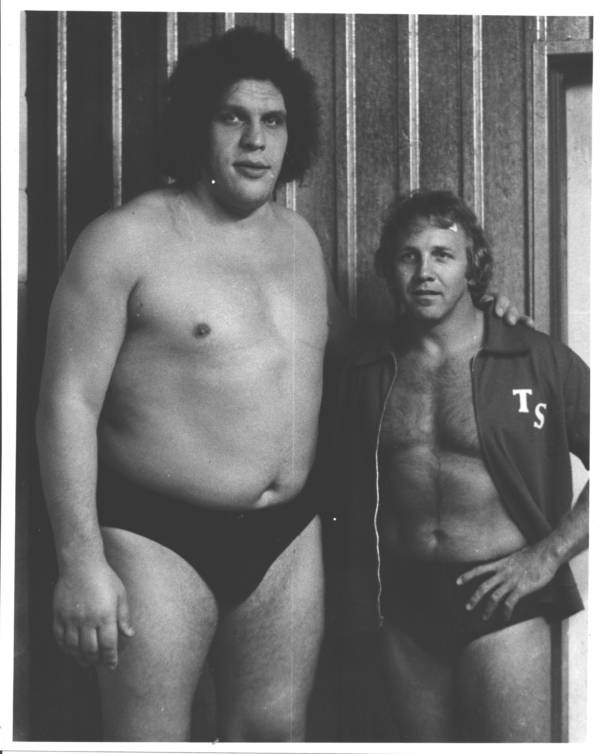 Wikimedia CommonsAndre the Giant is remembered for being larger than life — both inside and outside of the ring.

Rather than calling police or attempting to move the big man, hotel employees decided it was best to place velvet ropes around him.

“They decided that there was no shifting him,” said Elwes. “There’s no shifting a 550-pound, 7-foot-4 giant, so they had a choice: either call the authorities, and they didn’t want that kind of publicity, or wait for him to wake up, which was the wiser decision.”

By the time Andre was done filming The Princess Bride, his hotel bar tab was nearly $40,000.

There’s no question that Andre the Giant was the life of the party. But the party was sadly over for him in 1993. He died at the age of 46 from heart failure, which was likely caused by the strain on his body from his condition.

But while he lived, he was the undisputed heavyweight champion of drinking. And the wild stories about him remain legendary to this day.

After reading these Andre the Giant drinking stories, check out 21 photos of Andre the Giant that you won’t believe aren’t photoshopped. Then, learn about the most fascinating drinking rituals from around the world.