The Bishop of Noto in Sicily used his sermon during a winter arts festival to tell children that Santa was imaginary and that his image was invented by Coca-Cola. 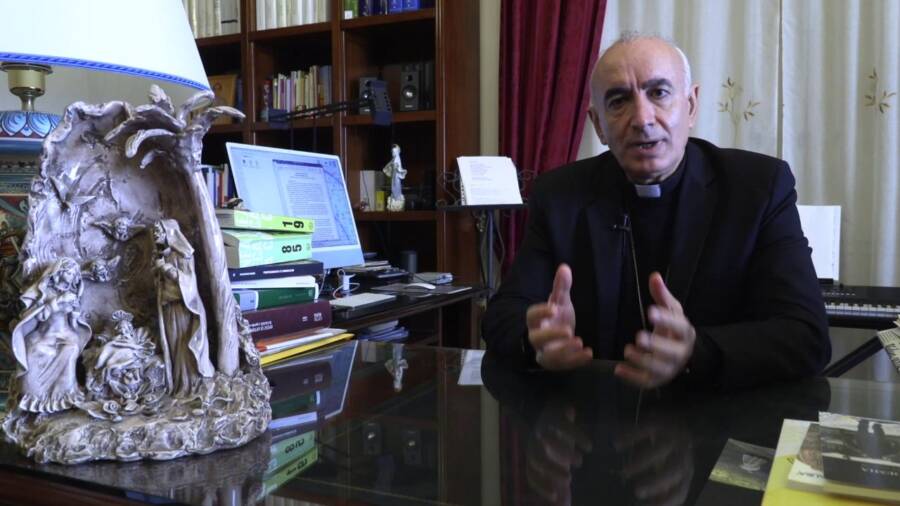 Diocesi di Noto/FacebookAntonio Staglianò told a group of school children, all of whom were younger than 9, that Santa Claus is a consumerist lie.

With Italy’s Christmas spirit in full swing, parents are purchasing presents, putting up trees, and gamely allowing their children to believe in Santa for one more year. But one Italian bishop isn’t having it, and recently took it upon himself to tell a group of school children the truth about Old Saint Nick.

According to The New York Times, the incident occurred at the Santissimo Salvatore Basilica in Noto, Sicily, on the Feast of St. Nicholas on Dec. 6, 2021. Bishop Antonio Staglianò told kids during their school trip that Santa wasn’t real, Christmas had been commercialized — and that their parents were liars.

“Santa Claus is an imaginary character,” he said. “No, Santa Claus does not exist. In fact, I would add that the red of the suit he wears was chosen by Coca-Cola exclusively for advertising purposes.”

Staglianò then went even further, claiming that Santa himself was a tool of the Big Soda industrial complex “to depict itself as an emblem of healthy values.”

He also told the children that their bearded gift-giver never visited the poor. “Is Father Christmas everyone’s father, or just some?” Staglianò asked.

“In the lockdown, Father Christmas didn’t visit the families that he used to. Why? It’s definitely not for fear of the coronavirus… With all due respect, Santa Claus only brings gifts to those who have money.” 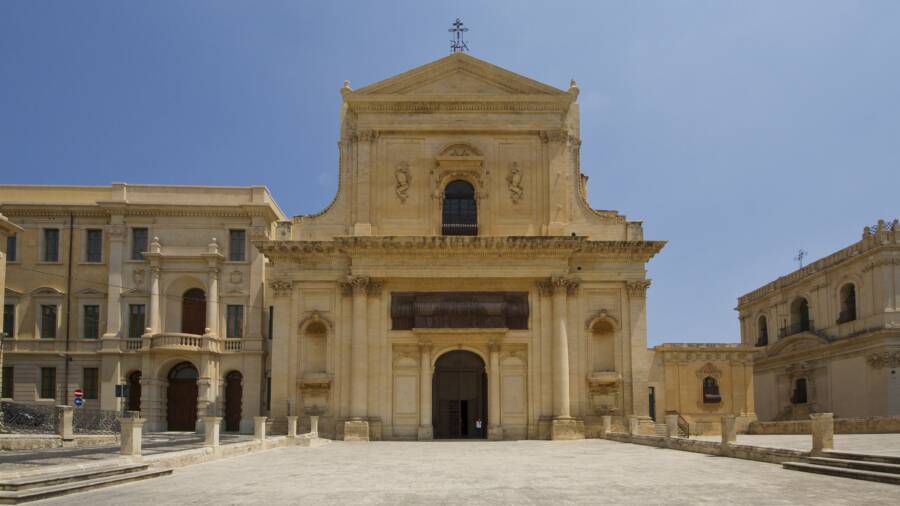 Wikimedia CommonsThe incident occurred at the Santissimo Salvatore Basilica in Noto, Sicily, on Dec. 6, 2021, the Feast of St. Nicholas.

Giuliana Scarnato, a local school teacher who chaperoned the group of children to the basilica for a winter festival, said there were audible gasps when Staglianò uttered his remarks.

Scarnato said the bishop “could have left Santa Claus out of it” but passionately continued to call the figure “fantastical, that he never existed” in front of his young congregation. And when one of the children spoke up to claim her parents had assured her that he did in fact exist, Staglianò told her to tell them, “You tell lies.”

Staglianò continued to challenge the children to explain why poor people and migrants “have never seen Santa Claus.” He then urged them to ask Santa for more gifts this year, only so they could explain to him if he showed up that they wanted to bring their presents to the poor, “given that you never visit them!” 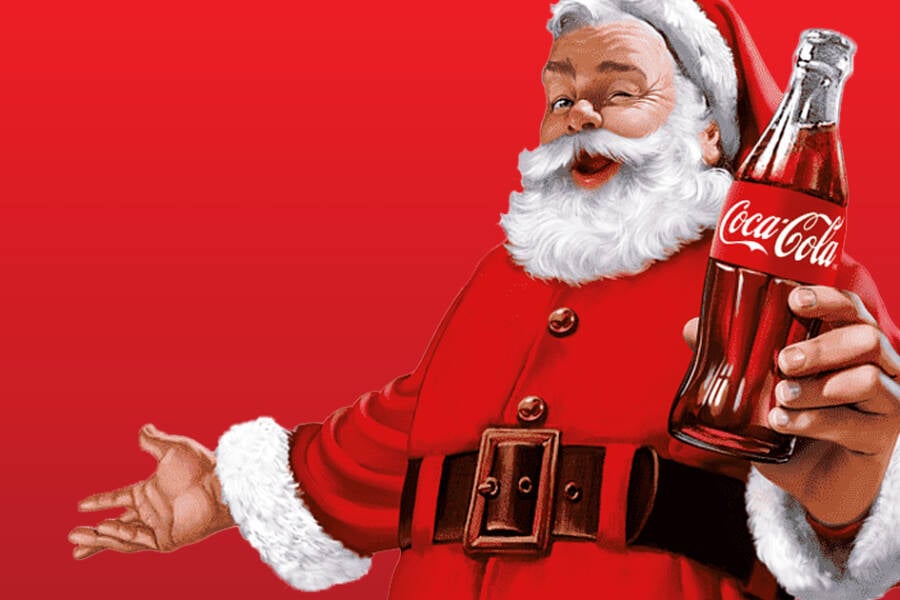 The Coca-Cola CompanyWhile Staglianò claimed Coca-Cola had chosen Santa Claus’ costume, the red and white outfit had been present in illustrations of the figure long before the company existed.

It didn’t take long for the bishop’s comments to go viral on social media platforms like Facebook. According to CNN, that is where Staglianò’s press secretary Alessandro Paolini issued a public apology to assuage critics. He claimed the bishop’s purported intentions were to usher in a return to traditional Christian values.

“On behalf of the bishop, I express my sorrow for this declaration which has created disappointment in the little ones, and want to specify that Monsignor Staglianò’s intentions were quite different,” wrote Paolini.

“We certainly must not demolish the imagination of children, but draw good examples from it that are positive for life.”

Paolini said Santa Claus was an effective tool to instill notions of generosity and sharing in children, but that Christmas had become commercialized and lost its true meaning. Staglianò added to those statements and expounded on “consumer culture,” overshadowing Jesus, who was “born to give himself to all humanity.”

“I didn’t tell them that Santa Claus doesn’t exist, but we talked about the need to distinguish what is real from what is not,” he said. “A real fact has come out, namely that Christmas no longer belongs to Christians. The Christmas atmosphere of lights and shopping has taken the place of Christmas.”

He also maintained that he wasn’t telling the kids anything they didn’t already know. He recalled one boy exclaiming, “I always knew it, that my dad was Santa Claus.” 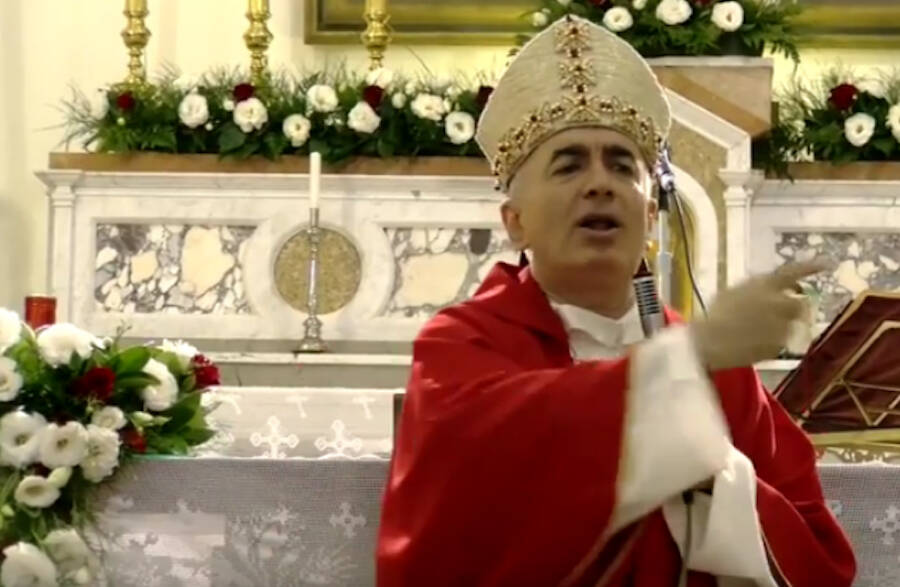 Staglianò claimed he merely hoped people would return to the origins of St. Nicholas, the fourth-century Bishop of Myra, in modern-day Turkey, who gave to the poor, saved women from prostitution, and prioritized kindness over materialism.

Ultimately, Staglianò’s comments have garnered support from those who believe the “War on Christmas” to be an actual threat, like Paolino, who decried “Santa Claus aka consumerism, the desire to own, buy, buy and buy again.”

On the other hand, most families were none too pleased with the bishop’s confrontational sermon with impressionable young children.

Mary Avola, for instance, left a public comment online. According to The Guardian, she had stern words for the religious leader.

“You are the demonstration that, when it comes to families, children and family education, you don’t understand a thing,” she wrote.

After reading about Italian bishop Antonio Staglianò, learn the real, secret history of Coca-Cola, from morphine and Santa to the Nazis. Then, read about the history of the “War on Christmas.”