When Exploding A-Bombs Were The Greatest Show In Las Vegas

Throughout the 1950s, atomic detonations brought countless tourists to Sin City — and helped make it what it is today. 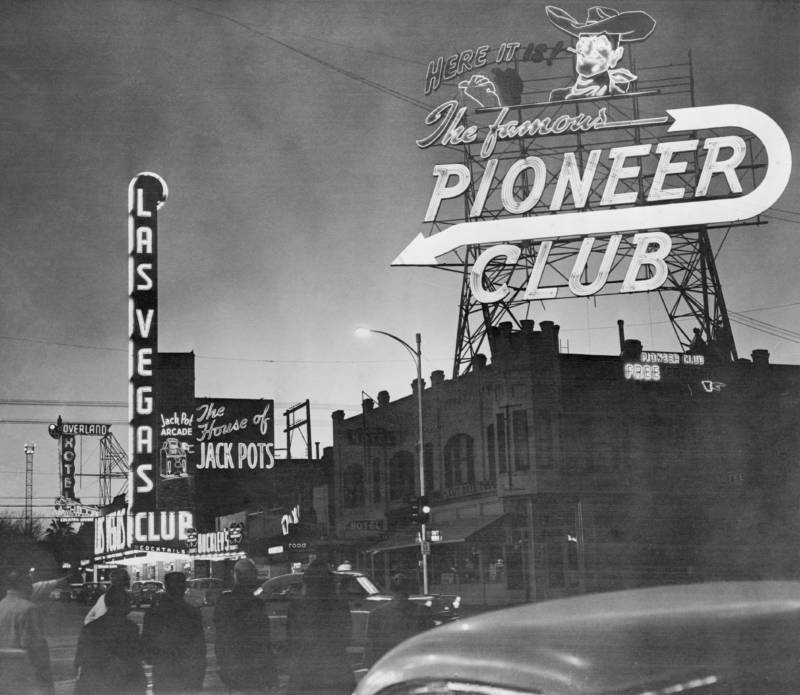 Bettmann/Contributor/Getty ImagesA group of gamblers stand on Fremont Street in Las Vegas watch the early morning sky illuminate from an atomic blast, which was detonated at a test site some 75 miles away. May 1955.

The threat of nuclear annihilation throughout the Cold War, its early years especially, might conjure up images of schoolchildren being told to “duck and cover” under their desks in the event of an attack. However, in classic American fashion, (understandable) fear wasn’t the only reaction. In addition to the terrified people who built bomb shelters in their backyards, there were also plenty of enterprising individuals who saw the silver (or perhaps green) lining of the Atomic Age.

In 1951 (the same year that the original “duck and cover” PSA came out), the United States government began its first nuclear testing in the desert area about 75 miles north of Las Vegas. Although the location was chosen for its isolation, the blast from this first test detonation could be seen as far away as San Francisco.

Footage of atomic tests conducted in Nevada in 1955.

Back in the 1950s, Las Vegas was not quite the same glitzy tourism magnet that it is today. In fact, part of the reason that Nevada was chosen for the nuclear test site was because, at the time, Las Vegas’ population was small enough (under 40,000).

However, in keeping with the wily business acumen that would turn a tiny desert strip into a multi-billion dollar industry, Vegas property owners quickly realized that people would pay good money to watch these bomb tests from the relative safety of a hotel or bar. 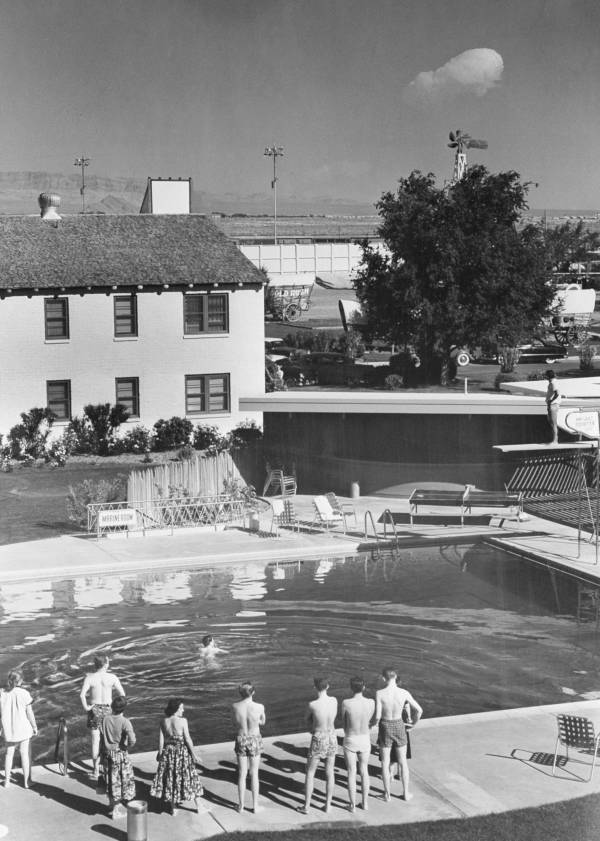 Bettmann/Contributor/Getty ImagesGuests at the Last Frontier hotel in Las Vegas watch the mushroom from a detonation about 75 miles away. May 8, 1953.

With people clamoring to gaze at mushroom clouds, the Las Vegas tourism industry somewhat shifted, and establishments like the Horseshoe Club and the Desert Inn had unwittingly hit the atomic tourism jackpot. Their north-facing rooms gave fascinated guests an unobstructed view of the desert and the testing site.

And both the proprietors of these places and others soon embraced atomic tourism completely. Bar owner Joe Sobchik, for one, quickly renamed his “Virginia’s Eatery” to “Atomic Cafe” and fed his guests “top-secret atomic cocktails” as they gaped at the deadly mushroom clouds from the bar’s roof.

Bomb-watching became so popular that the city published detonation times in advance so that thrill-seeking tourists could be sure they had the best view and would be able to take photos. Meanwhile, one showgirl at the Sands casino was dubbed “Miss Atomic Bomb.” Las Vegas officially had atomic fever.

Thanks to the new atomic tourism industry as well as the federal funding and jobs brought in by the Nevada test site, Las Vegas’ population doubled within a decade, leading Horshoe Club casino owner Benny Binion to proclaim that “the best thing to happen to Vegas was the Atomic Bomb.” 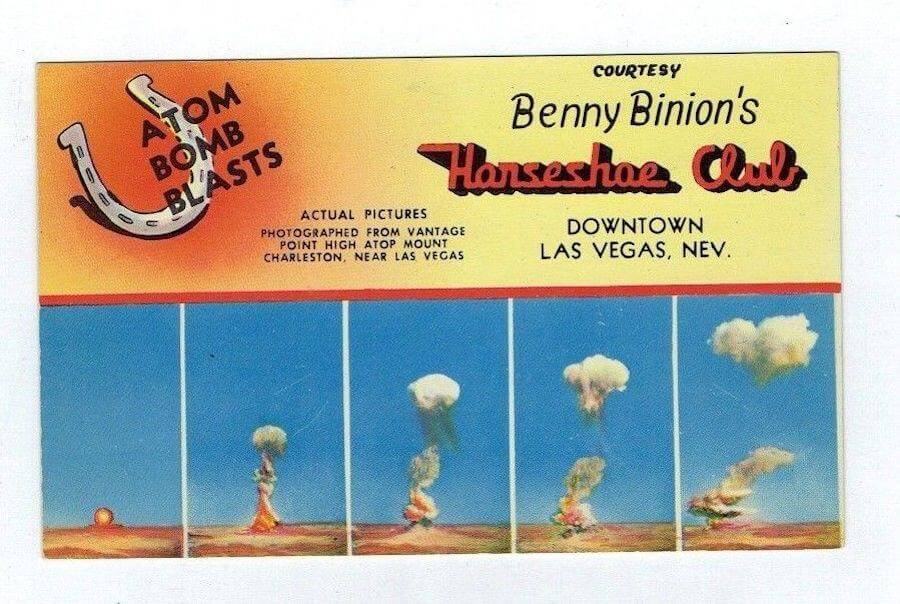 Part of what made atomic tourism so appealing to tourists was the thrill of being so close to such deadly power. Of course, there was also a very real danger that made the detonations much more than the glorified fireworks show they were touted as.

By 1992, the United States government had finally done enough testing to realize the negative effects of the radiation on both the soldiers and nearby residents and moved all testing underground, effectively bringing Las Vegas’ age of atomic tourism to an end.

Today, given all that is known about the dangers of nuclear radiation, it seems absolutely absurd that families would drive out to the areas around the test site and have picnics while watching nuclear weapons explode. But at the time, that’s precisely what happened. 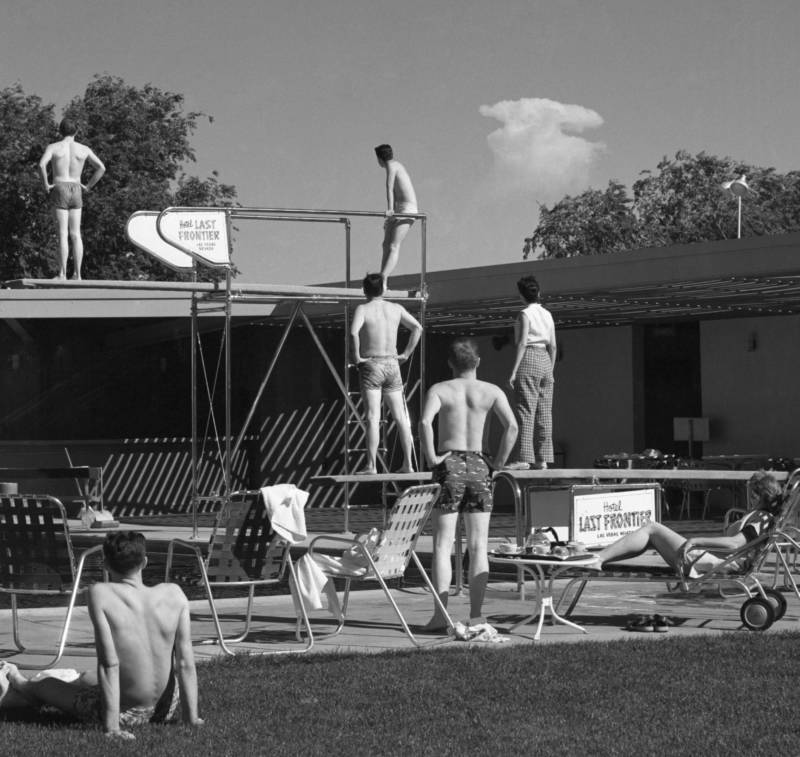 Bettmann/Contributor/Getty ImagesEarly morning bathers at a hotel pool in Las Vegas stop to watch the mushroom cloud of an atomic detonation at a test site about 75 miles from the city. May 8, 1953.

Between 1951 and 1992, there were more than 900 documented nuclear detonations at the Las Vegas test site. And a trip to the area today is a sober reminder of just how devastating those tests were.

Modern nuclear tourists still bus out to the desert to see the 1,280 foot-wide crater left by one 1962 test as well as the remnants of “Doom Town,” a fake town populated with mannequins that was purposefully destroyed by a bomb in order to test how an American town would withstand an actual atomic attack.

This modern atomic tourism is obviously very different from the carefree, glamorous spectacle that atomic tourism was during the 1950s. But it’s nevertheless clear that Las Vegas wouldn’t be exactly the same without nuclear testing. The city’s National Atomic Testing Museum may not be as popular a destination as the casinos, but it may say almost as much about why Las Vegas is what it is today.

Next, have a look at some abandoned nuclear test sites that humans destroyed even worse than Chernobyl. Then, check out the most fascinating photos from the 1950s.