Located in the Moc Chau Island park in the northwestern province of Son La, the Back Long pedestrian bridge spans over 2,000 feet above a 490-foot-deep gorge. 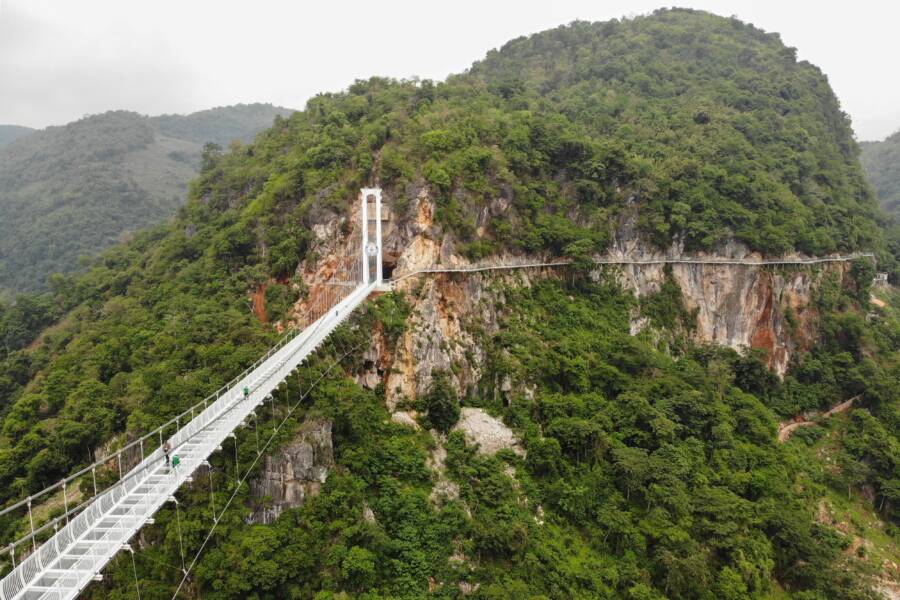 NHAC NGUYEN/AFP/Getty ImagesThe Bach Long bridge opened on April 29, 2022, to coincide with the 47th anniversary of the end of the Vietnam War.

Two long years after closing its borders in the wake of the COVID-19 pandemic, Vietnam ended its travel restrictions and reopened to visitors in March 2022. While the nation had lost billions in much-needed tourism, one newfound destination is sure to help lure travelers back — the longest glass-bottomed bridge in the world.

Built within the Moc Chau district of the northwestern province of Son La, about 120 miles from Hanoi, the bridge is known as Bach Long, which means “White Dragon,” according to The Daily Mail. This architectural wonder measures 2,073 feet and is suspended 492 feet over a valley. While it connects two picturesque mountains, the walkway is made of glass — and not for the faint-hearted.

For now, the French engineering firm that built the bridge says it’s the longest in the world, and Guinness World Records plans to visit this month to verify that claim, according to Business Insider. The former record-holder is a 1,726-foot-long suspension bridge that passes over 600 feet above the Lianjiang River in Guandong Province in China.

Moc Chau is one of the most scenic districts in Vietnam. This rural highland region has a population of just over 100,000 people who live at an average elevation of 3,280 feet. And the Moc Chau Island Mountain Park and Resort has long been a popular tourist destination. 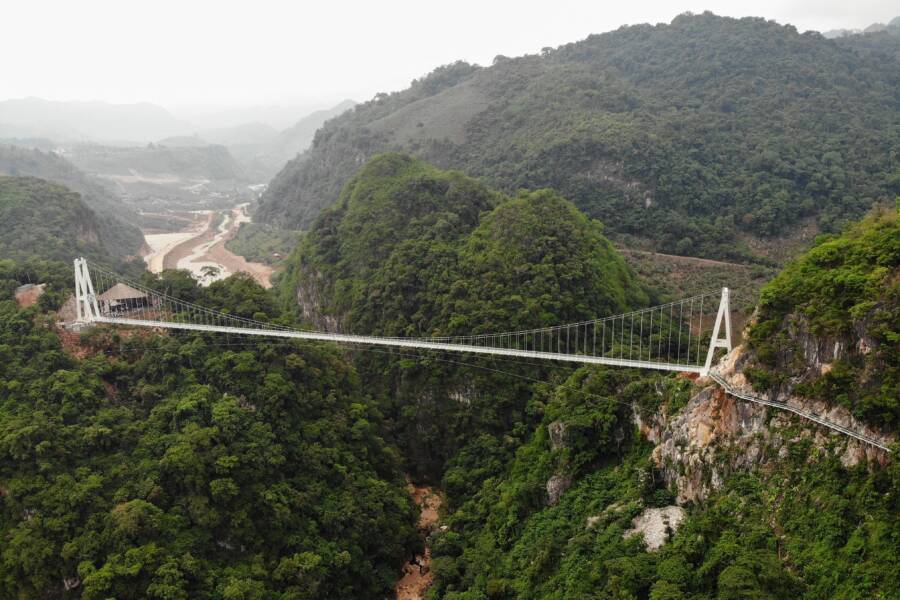 NHAC NGUYEN/AFP/Getty ImagesThe bridge measures 2,073 feet and hangs over a valley at 492 feet.

But when the Vietnamese government stopped issuing tourist visas and closed its borders in March 2020 because of the COVID-19 pandemic, the tourism department estimated that this would cost the nation $4 billion in three short months.

Eager to avert that, Vietnam’s 26 Moc Chau Tourism Company collaborated with the Paris-based Saint-Gobin company to build a modern marvel, according to The South China Morning Post. The end result now snakes along the Moc Chau cliff face before jutting out over a precipitous valley. 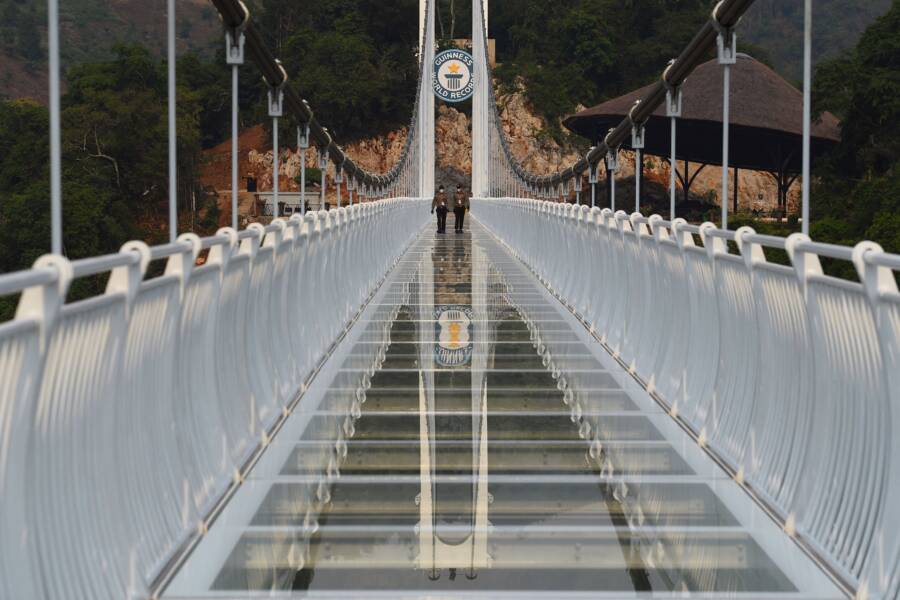 NHAC NGUYEN/AFP/Getty ImagesGuards ensure that no more than 500 people walk the bridge at any given time and that traffic only flows in one direction.

According to New Civil Engineer, the bottom of the bridge is comprised of three layers of tempered glass panels that measure 1.5 inches thick, 7.9 feet wide, and 9.8 feet long. The suspension cables are 0.16 inches thick and were imported from South Korea. To ensure the bridge’s integrity, 26 Moc Chau Tourism Company drove cars and trucks over it.

The bridge is also patrolled by guards instructed to thwart any potential shenanigans. Visitors, meanwhile, are treated to a system of integrated lighting and sound of 60 preprogrammed experiences officials have dubbed “9D technology.” While this is said to enhance the visit, the bridge itself is impressive enough. 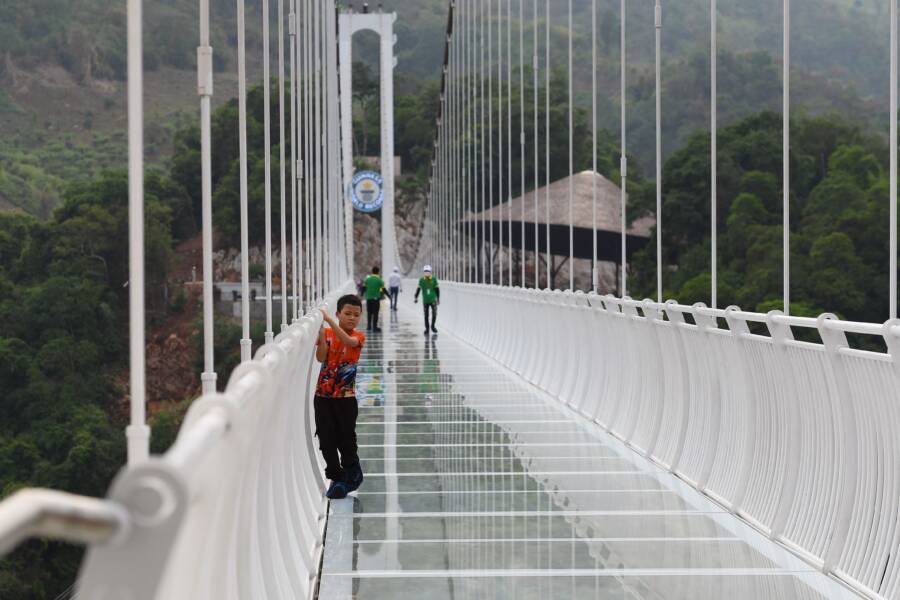 NHAC NGUYEN/AFP/Getty ImagesAuthorities claimed that even if one of the glass panes shatters, the bridge can withstand a weight of five tons.

“Standing on the bridge, visitors can admire the majesty of the Northwest mountains and forests, feel the nature full of sunshine and wind floating in the magical air,” said the bridge operator.

When the Bach Long bridge opened in late April, visitors were stunned. “I think it’s all great,” one adventurous visitor told Al Jazeera the day before the official opening on April 30, which coincided with Vietnam’s national Reunification Day that marks the end of the Vietnam War. 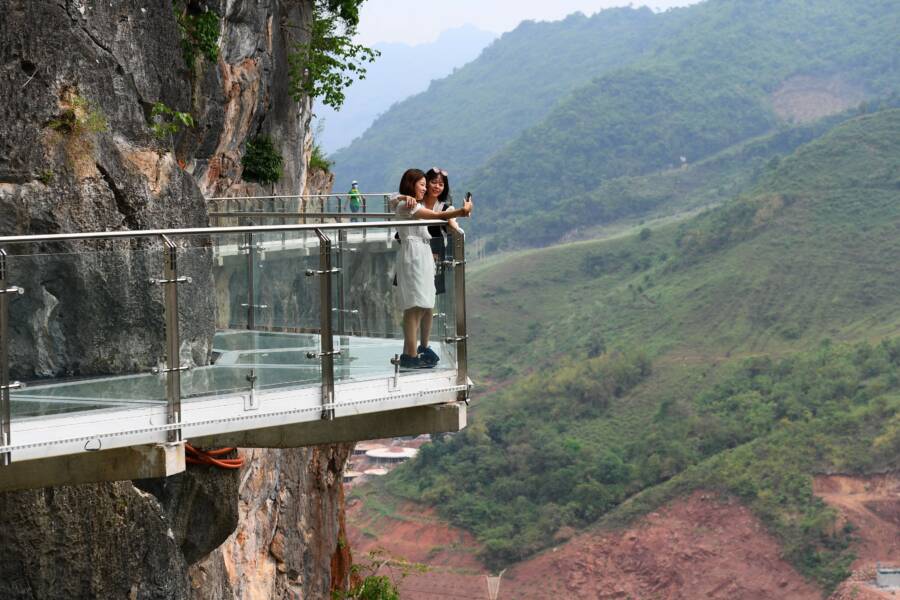 NHAC NGUYEN/AFP/Getty ImagesThe bridge has two observation decks and towers on either side.

“Stepping on the bridge and looking down was scary at first, but if we continue confidently, it was very amazing.”

“We hope the launching of the bridge will help our company to attract both local and foreign tourists to Moc Chau district,” Mai Tri Tue, deputy director of 26 Moc Chau Tourism Company, told The South China Morning Post. 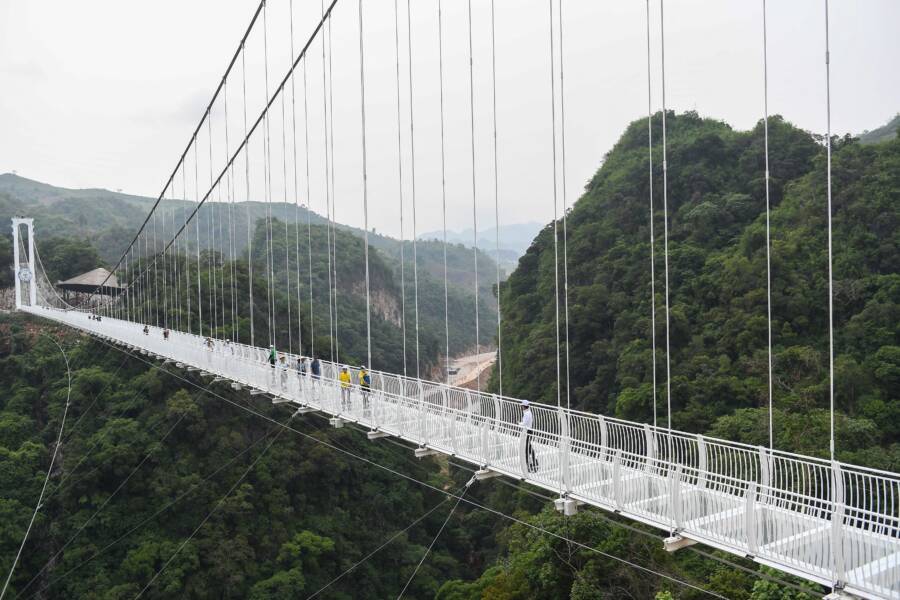 NHAC NGUYEN/AFP/Getty ImagesGuinness World Records will visit the bridge in May to confirm whether it’s the longest in the world.

Fortunately for trepidatious visitors, the Bach Long bridge can withstand a weight of five tons even if one of the glass panes shatters. Ultimately, however, authorities are only permitting 500 people at one time to cross the bridge — and are also only allowing traffic to flow in one direction at any given time.

Furthermore, Vietnam will be hosting the Southeast Asian Games. Beginning on May 12, this series of events will see more than 10,000 athletes and sports officials from regional countries descend on Vietnam and bolster its tourism.

After reading about the longest bridge in the world, learn about India’s “eco” bridge that helps animals cross busy highways. Then, read about the haunted Goatman’s Bridge in rural Texas.