How Homophobia Almost Erased The Legacy Of Bayard Rustin, The Man Who Advised MLK

Bayard Rustin was the mind behind the 1963 March on Washington and organized the first Freedom Rides, but his open homosexuality was fodder for critics of the civil rights movement.

Bayard Rustin was a prominent African American civil rights activist. He was an exhaustive organizer and his Quaker-based pacifism galvanized the methods of other civil rights leaders, including Martin Luther King Jr.

He was a central force behind the success of the 1963 March On Washington and he was a trusted advisor to MLK, but fellow activists began to distance themselves from the brilliant organizer when it seemed his sexual identity and controversial past threatened to hamper the reputation of the movement.

Despite being ostracized, Rustin continued to fight for human rights and was posthumously honored a Presidential Medal of Freedom for his dedication to the civil rights movement. 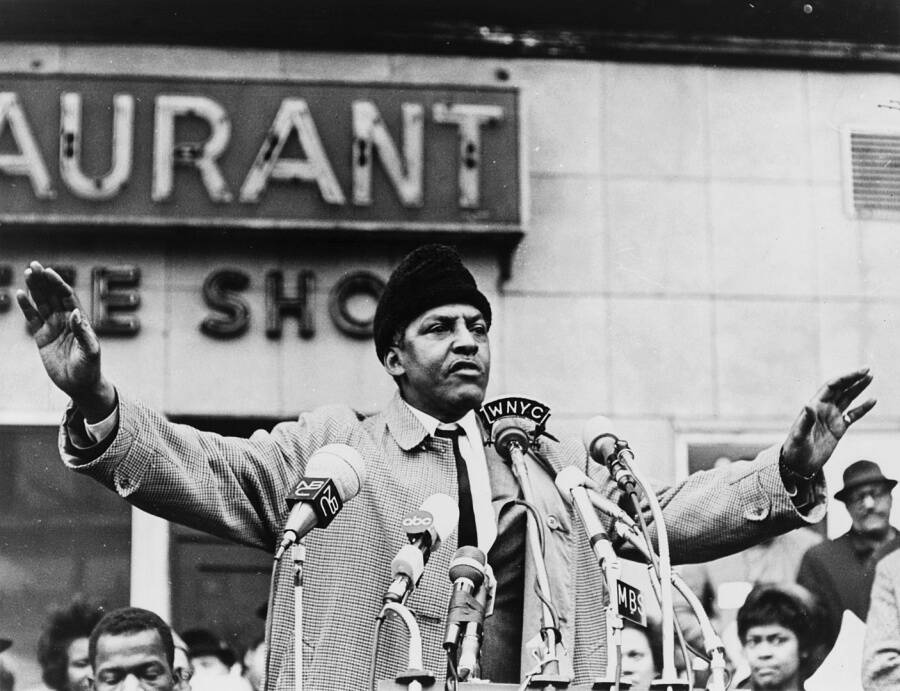 Getty ImagesRustin was a mesmerizing public orator, able to captivate crowds at the rallies he organized.

Bayard Rustin was born in West Chester, Pennsylvania, on March 17, 1912. He was born to a 16-year-old named Florence and an absent father. As a result, Rustin grew up close with his maternal grandparents, Janifer and Julia Rustin, who were Quakers.

By the time he graduated high school in 1932, Bayard Rustin had shown incredible potential. At his high school commencement, Rustin was among six student speakers chosen from his class (in lieu of a valedictorian). He also scored the highest amongst the students in “honor points.”

Armed with $100 in scholarship money, Bayard Rustin left Pennsylvania to attend Wilberforce University in Ohio. But Rustin’s tendency to challenge authority led to tensions between him and the school. 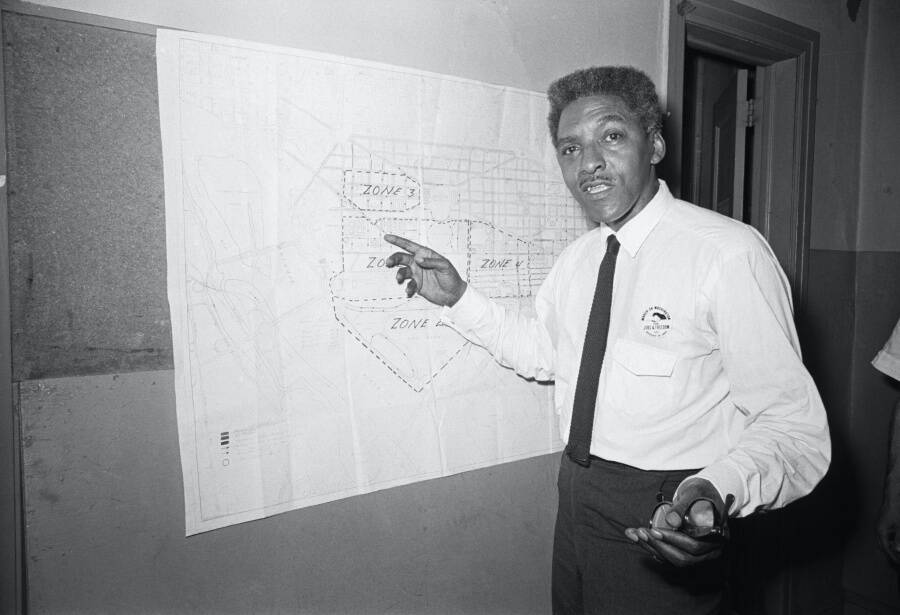 Getty ImagesHe was appointed the deputy director of the March on Washington though he held a prominent role in its organization.

By Rustin’s own account years later, he was asked to leave the university after he tried to organize a student strike to improve the quality of the school’s food.

At 22, in a United States still hampered by the Depression, young Bayard Rustin felt aimless. He eventually moved back to West Chester where he enrolled at the Cheyney State Teachers College, a black school founded by Quakers.

Hill encouraged the young man to become socially active and to join the school’s anti-war movement before the Second World War. Thus began Rustin’s career as an activist. 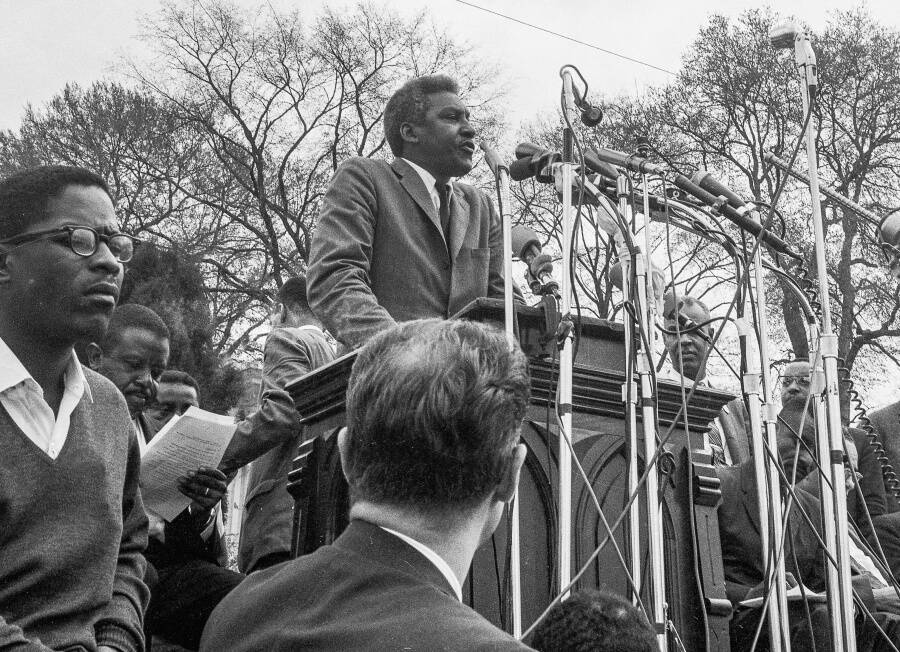 Bayard Rustin’s political beliefs were largely shaped by his exposure to outspoken black activists both at Cheyney and within his own family.

His grandmother’s Quaker beliefs also had a significant influence on him. In his own words, Rustin came to believe that Quaker’s ideas were “based on the concept of a single human family and the belief that all members of that family are equal.” This ethic would be the motivation behind his activism.

In the summer of 1937, Cheyney College sent Bayard Rustin to attend a student peace brigade held by the Quaker-based American Friends Service Committee (AFSC) in Auburn, New York. There, Rustin met an older African American Quaker activist named Norman Whitney, who received the nickname “the bishop” due to his strong pacifist stance, which he, in turn, passed on to young Rustin.

“Norman used to say that if he ever doubted the existence of God, he always thought of Bayard,” a friend said of Norman and Rustin’s bond. “Because Bayard had come from nowhere, had no opportunity as a young man, and he really educated himself.”

Rutsin eventually left West Chester and according to John D’Emilio in his book, Lost Prophet: The Life And Times Of Bayard Rustin, the reason why remains murky — though the young activist’s sexuality may have had something to do with it. 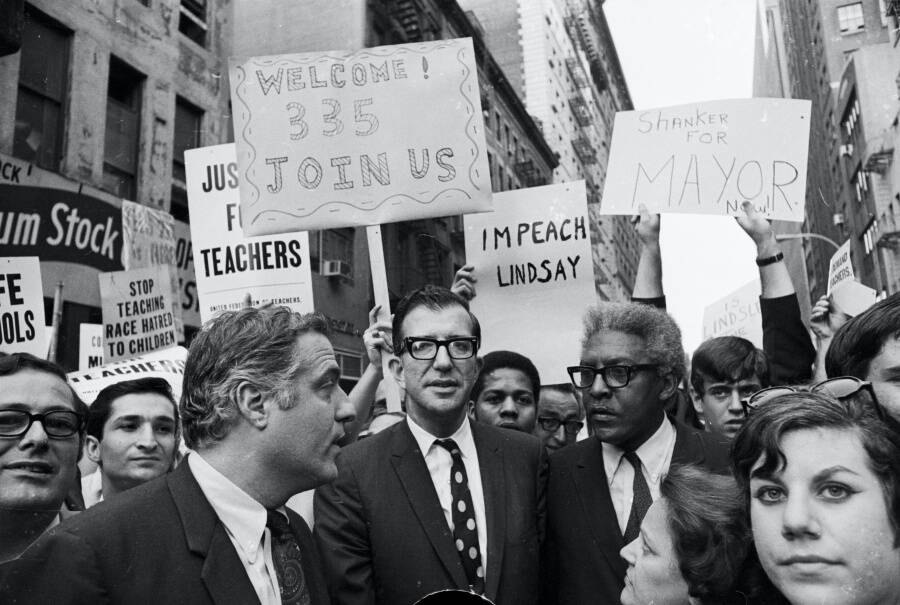 Although Rustin never denied his homosexuality, public homosexuality was still considered extremely taboo in his time. The stakes were even higher for a black gay man.

Around the latter part of the 1930s, an incident involving Rustin and a gay white man in the area became known. His grandmother and Whitney were both accepting of his identity, but his relationship with Hill soured.

Rustin left his hometown and for New York City.

This was right at the height of the Harlem Renaissance when black artists and activists filled the Depression-era city streets with hope.

It was there, in the heart of black Harlem, where the budding activist grew into a prominent civil rights advocate.

The March On Washington 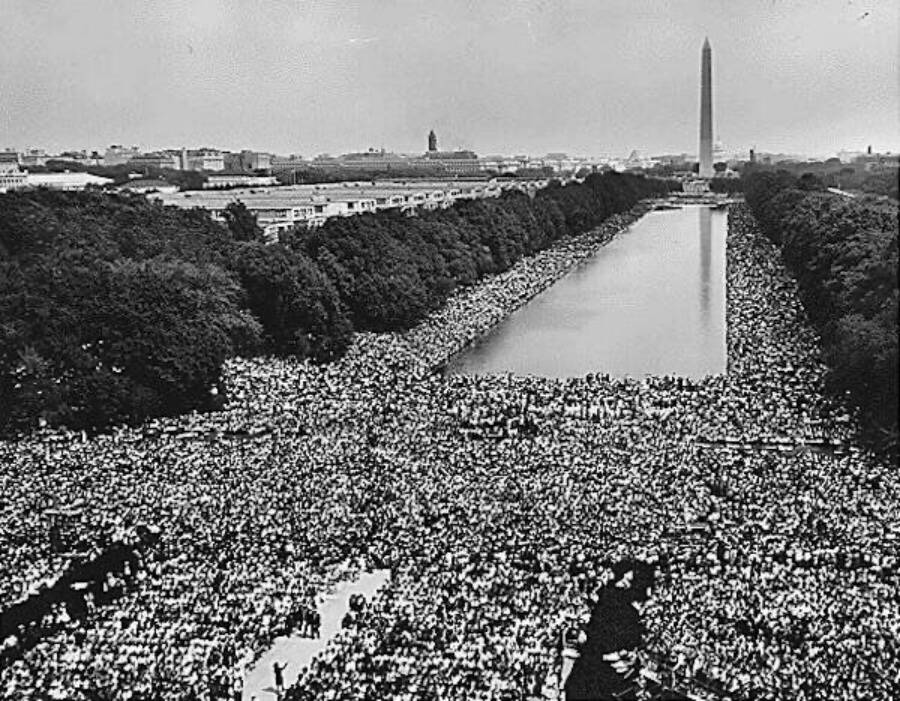 Wikimedia CommonsThe March on Washington was expected to bring about 100,000 people to the National Mall — instead it drew 250,000.

Meanwhile, Bayard Rustin’s pacifist ideologies grew stronger amid the outbreak of World War II. He went so far as to refuse the draft in 1944, for which he was jailed as a conscientious objector.

Rustin staged speeches and rallies, participated in protests against the U.S. draft and segregationist laws, and launched the first Freedom Rides through the Deep South. He was instrumental in the formation of the Southern Christian Leadership Conference, known as SCLC, alongside Martin Luther King Jr.

“We hit it off immediately,” Rustin recalled of their first meeting. King had become acquainted with nonviolent views through his religious studies, but according to Rustin, King “had very limited notions about how a nonviolent protest should be carried out.”

Rustin reportedly convinced MLK to get rid of personal firearms for protection and became the primary organizer behind their nonviolent protests. 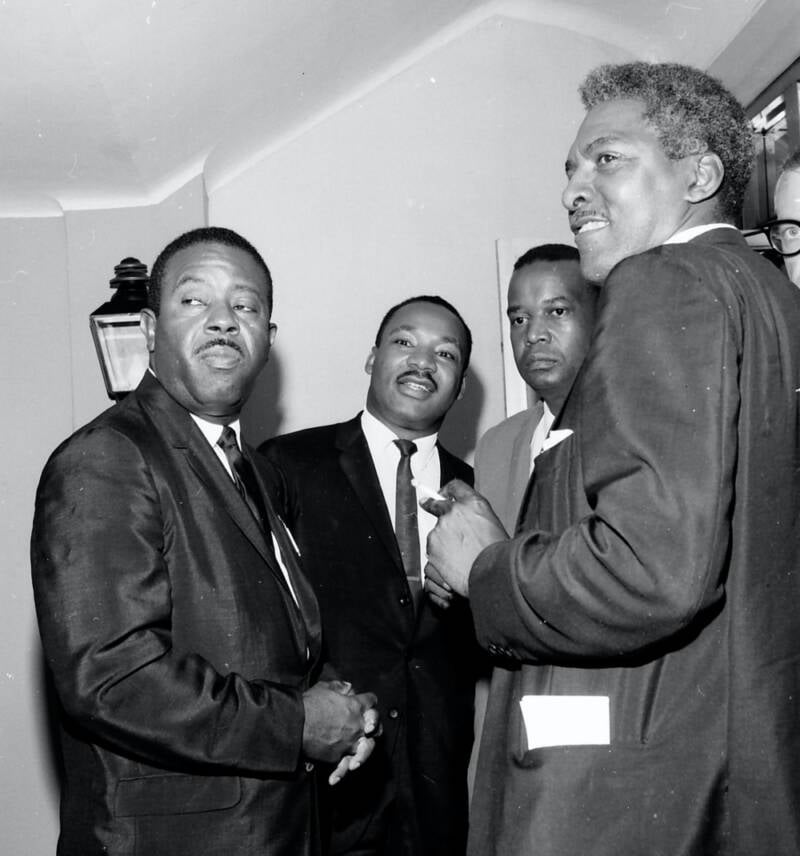 Getty ImagesMany credit Bayard Rustin for influencing MLK’s pacifist views that were considered the cornerstone of his activism.

Rustin’s most notable contribution to the fight for racial equality was no doubt his organization of the 1963 March on Washington For Jobs and Freedom.

While MLK is remembered as the face of the march because of his electrifying “I Have A Dream” speech, many credit Bayard Rustin as the influence behind it.

“Bayard was one of a kind, and his talent was so enormous,” Eleanor Holmes Norton, who was a volunteer for the march under Rustin’s leadership, said. “There had been many marches from the South… but calling people from all over the country to come to Washington, the capital of the United States, was unheard of.”

Rustin had two months to pull off the event. But the challenge didn’t deter him.

“As we follow this form of mass action and strategic nonviolence,” Rustin said, “we will not only put pressure on the government, but we will put pressure on other groups which ought by their nature to be allied with us.”

It was predicted that around 100,000 people would come to Washington, but on Aug. 28, 1963, the march drew a crowd of 250,000 in front of the Lincoln Memorial — including celebrities like Jackie Robinson and Sammy Davis Jr. — cementing it as one of the largest mass rallies in U.S. history.

While the historic march is often best remembered by MLK’s ‘I Have A Dream’ speech, the march may have never happened without the leadership of Bayard Rustin.

But Rustin never quite received the recognition he deserved.

A decade earlier, he had been arrested for having sex with another man inside a parked vehicle during one of his tour stops in California. He was charged with “sexual perversion” and forced to register as a sex offender.

Opponents of the burgeoning civil rights movement used Rustin’s sexuality to discredit the movement. In fact, just weeks before the March on Washington, FBI chief J. Edgar Hoover even gave segregationist Senator Strom Thurmond a photo of Rustin talking to King while the latter was bathing, which Thurmond used to imply that the two were lovers and discredit them both. 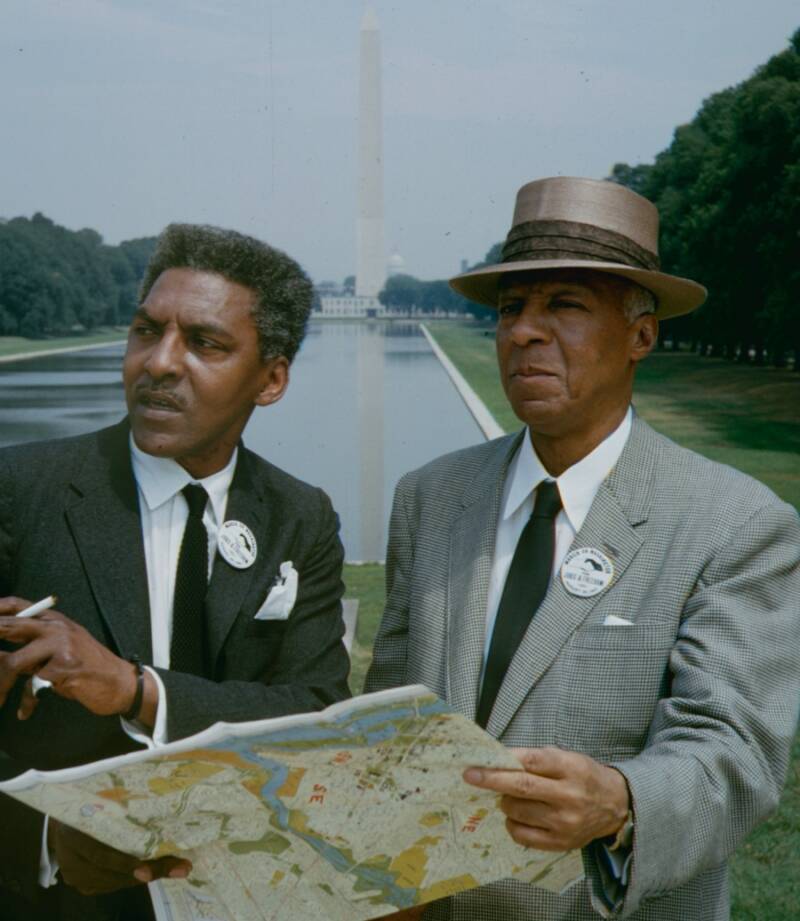 “It was a personally painful situation for him, I think, because he was disappointed that Dr. King didn’t stand up for him or didn’t have more backbone,” said Walter Naegle, who was Rustin’s life partner when he died.

“But, in all fairness to Dr. King and to Bayard, Bayard understood that this was a political move and it was probably better for Dr. King to do what he did politically speaking, in terms of the movement.” 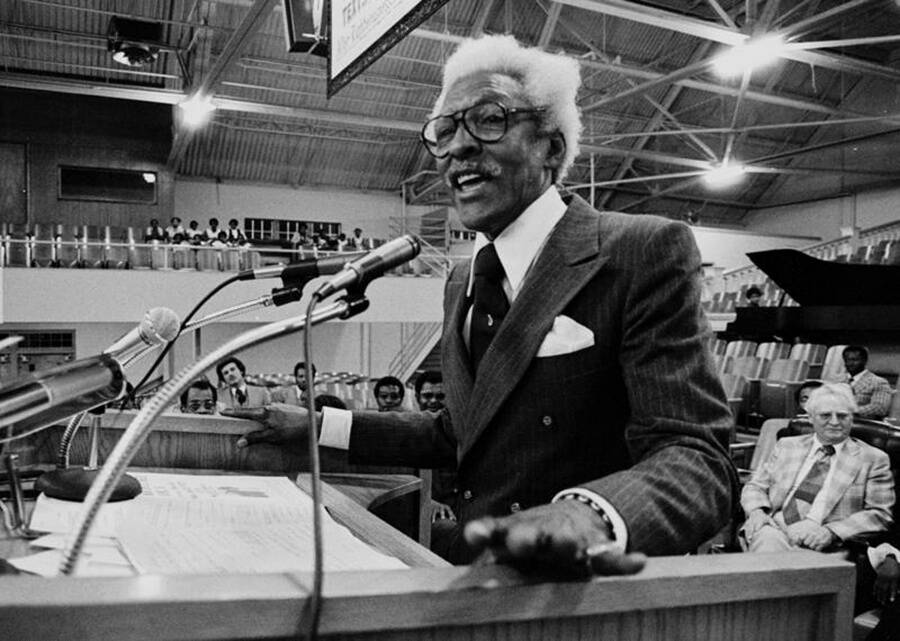 Though he was cast aside by fellow activists, Bayard Rustin continued to fight for civil and gay rights. He remained an active speaker but he never reached the level of leadership he had before. He passed away on Aug. 24, 1987.

Bayard Rustin’s contributions to the civil rights movement have been given renewed acknowledgment. His life’s work has been chronicled in several biographies and, in 2013, President Barack Obama posthumously awarded Bayard Rustin with the Presidential Medal of Freedom. 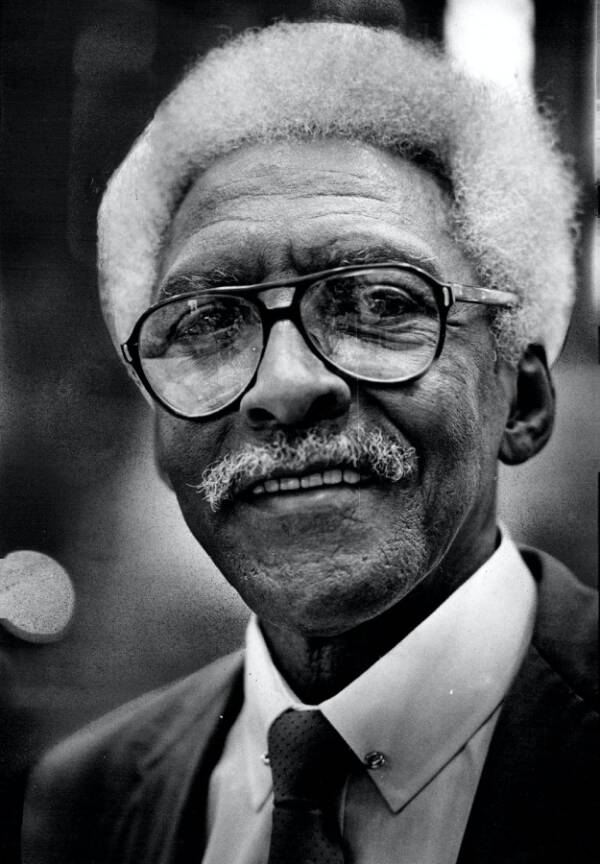 John Sunderland/The Denver Post via Getty ImagesHe was awarded the prestigious Medal Of Freedom posthumously in 2013.

In February 2020, 67 years after his homophobic arrest, Rustin was pardoned by California Gov. Gavin Newsom.

“Mr. Rustin was criminalized because of stigma, bias, and ignorance,” Newsom said. “With this act of executive clemency, I acknowledge the inherent injustice of this conviction, an injustice that was compounded by his political opponents’ use of the record of this case to try to undermine him, his associates, and the civil rights movement.”

Next, dig into the haunting tragedy of Martin Luther King Jr’s assassination. Then, meet another unsung hero of the civil rights movement, Ella Baker.