Belle Gunness wanted the American Dream. She eventually found it through insurance fraud and killing husbands, children, and anyone in her way. 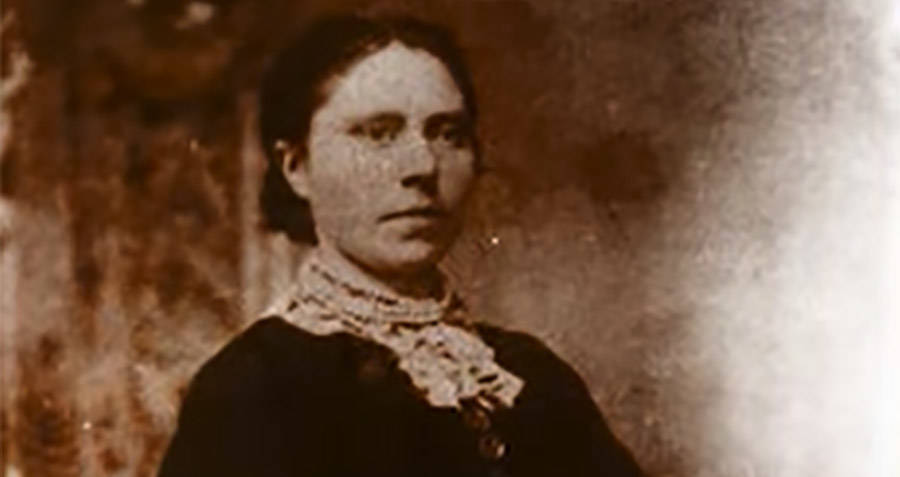 Belle Gunness grew up dirt poor in the small Norwegian village of Selbu in 1859. Like many, she emigrated to the United States in search of the American Dream. She found it in Chicago when she discovered a most ingenious way to make money: insurance fraud–with a hefty body count, that is. 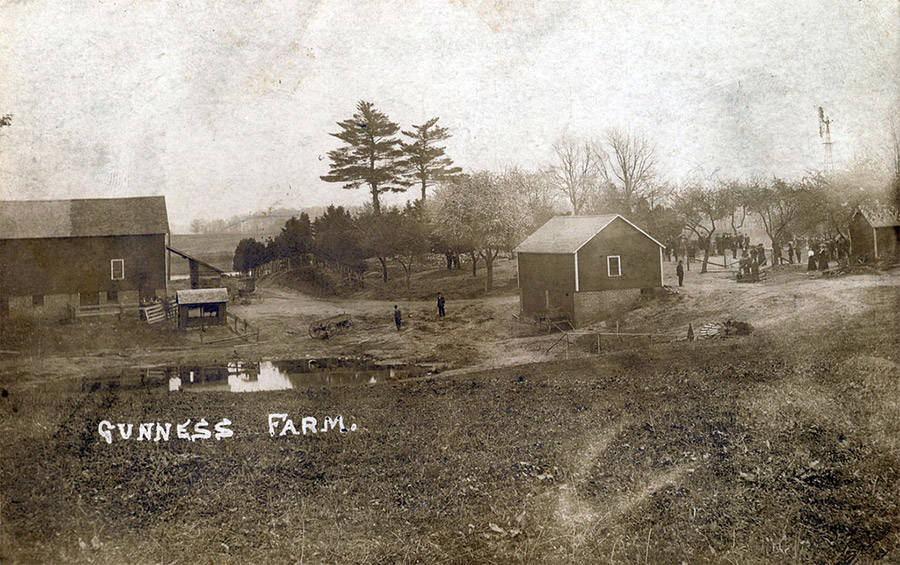 To the outside world, disaster and tragedy struck Gunness an inordinate amount of times. Properties she owned mysteriously burned to the ground, while those closest to her tragically started to drop like flies. But there was always a silver lining for Gunness in the form of a large insurance payout.

In reality, she was one of the first Black Widows and became a prolific serial killer credited with murdering around 40 victims. Hell’s Belle, or Lady Bluebeard as she is often known, killed her husbands and even her own children.

When she ran out of husbands, she attracted would-be suitors to her ‘Murder Farm,’ telling them to always bring their savings. At six feet tall and weighing 200 pounds, Gunness could certainly handle herself if one of her victims attempted to escape.

Gunness’ penchant for murder and insurance fraud started shortly after she married her first husband Mads Sorenson in 1893. Together they opened a confectionary store and had four children — Caroline, Axel, Myrtle, and Lucy. They also had a foster child named Jennie Olsen.

With a husband, children, and a business, there were plenty of opportunities for Gunness to claim insurance. The business burned down first and then two of her children, Caroline and Axel, died from acute colitis. However, acute colitis and strychnine poisoning share some common symptoms, such as abdominal pain, but this slipped past the coroner and Gunness got her money. 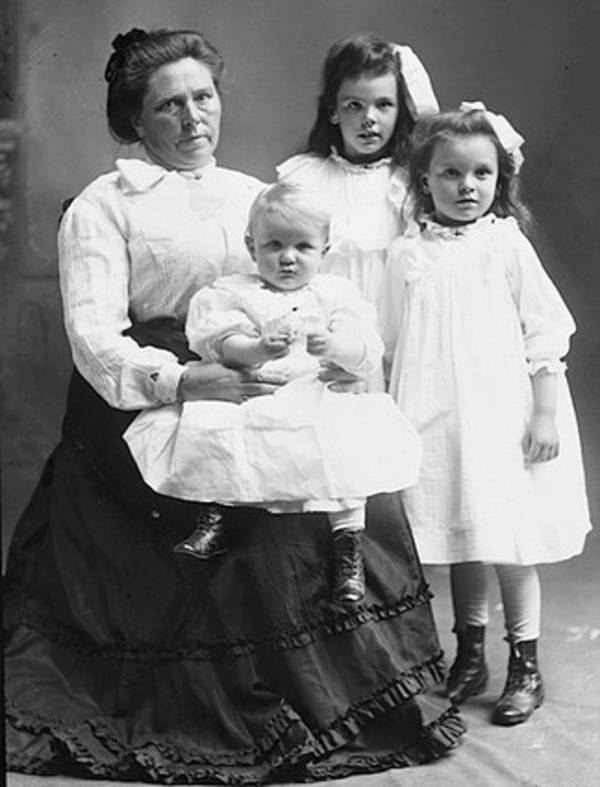 In 1900, her first husband Mads died on the day when his two life insurance policies conveniently overlapped. Gunness received two insurance pay-outs for one life.

The first doctor examined his body and discovered Mads had died of strychnine poisoning. But Gunness’ doctor overruled the finding and determined that he had died of heart failure. Yet again, Gunness got away with murder.

With plenty of insurance money in her pocket, she took her remaining children to LaPorte, Indiana. In 1901, she bought a 42-acre farm at the end of McClung road. Though a woman of means, she still wanted more. Soon after, a part of the farm burned down and she collected more insurance money.

On April 1, 1902, she married Peter Gunness, a local butcher and widower. Her new husband brought with him two daughters, who Belle saw as dollar signs.

Not long after the wedding, one child died under mysterious circumstances. Peter knew something wasn’t right and sent his eldest daughter, Swanhild, to stay with relatives. She was the only child to survive Gunness.

As it turns out, Peter should have left too. In December of 1902, he died when a meat grinder fell off a kitchen shelf and onto his head. Gunness’ daughter Jennie told schoolmates, “My mama killed my papa. She hit him with a meat cleaver and he died. Don’t tell a soul.”

This time the coroner noticed symptoms of strychnine poisoning and ordered an inquest. But no hard evidence was found and Gunness convincingly cried crocodile tears over her husband’s death. However, they soon dried up when she cashed in Peter’s life insurance policy. Six months after Peter’s death, Belle gave birth to his son, Philip Gunness.

With her second husband gone, she found a far more efficient way to get money. She placed ads in newspapers for well-off suitors to come to her farm. Many men traveled to LaPorte never to be seen again.

In her letters, she had no problem convincing them to bring their money and to “not to tell anyone you are coming!”

They bought “shares” in her farm by depositing their cash into Belle’s bank account. When the transactions were done, she would poison their food or hit them over the head with a meat cleaver.

Then according to Jack Rosewood, author of Belle Gunness: The True Story of The Slaying Mother: Historical Serial Killers and Murderers, she would dismember the bodies and either feed them to her pigs or bury them in the hog pen.

On the morning of April 28, 1908, her farmhouse burned to the ground where town authorities found the bodies of Belle’s three children: Lucy and Myrtle Sorenson, and Philip Gunness. In the basement, they also found the corpse of a headless woman thought to be Belle Gunness.

Originally, authorities believed that Belle had been murdered. But several days after the fire, Asle Helgelien turned up looking for his missing brother Andrew, one of the men who fell for Gunness, as he was well aware of the correspondence between him and Gunness. He was adamant that Gunness had killed his brother and pressed the LaPorte County Sheriff to search the farm. Upon visiting the farm with a former farmhand, they stumbled upon “soft depressions” in the hog pen, and, after some digging, they found a gunny sack containing “two hands, two feet, and one head.”

He recognized the head to belong to his brother. Further digging at the lot yielded more: in the span of two days, investigators found the total of 11 burlap sacks, which contained “arms hacked from the shoulders down, masses of human bon wrapped in loose flesh that dripped like jelly.” Gunness had followed the same pattern in butchering all of the bodies: the legs were chopped at the knee, the arms were hacked at the shoulder, and the head decapitated.

While it was challenging to identify the majority of the bodies, among the remains that were retrieved were those belonging to Gunness’ foster daughter Jennie Olsen, who had been missing since 1906.

The press was immediately lured by the sordid details of Gunness’ story: before the finding of the dismembered bodies, the local press had been portraying Gunness as a heroic mother who died in a fire. Soon, though, she became the “Indiana Ogress” the “Female Bluebeard,” and earned comparisons to Lady Macbeth. Reporters described her home as a “horror farm” and a “death garden.” People flocked to La Porte, as it became a local —and national— attraction, to the point that vendors reportedly sold ice cream, popcorn, cake, and something called “Gunness Stew.”

It was crucial, though, to identify the corpse of the aforementioned headless woman, as failing to identify her could mean that Gunness was alive somewhere, ready to carry on with her scheme. After combing through the ashes, the investigators found dental bridgework belonging to Gunness. The coroner deemed this sufficient evidence to confirm that the headless corpse belonged to Gunness. 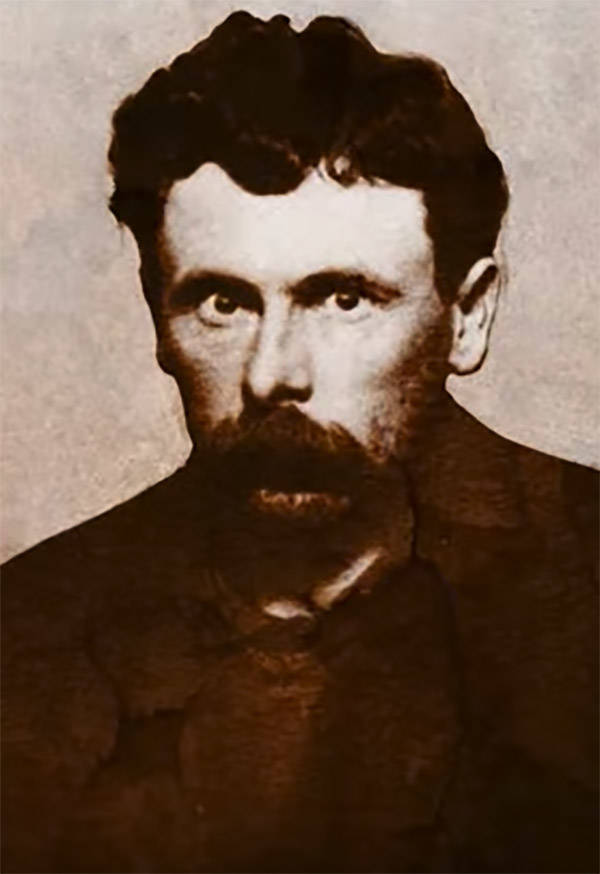 Once Gunness ruled out, attention turned to her farmhand, Ray Lamphere. For a while, he was the prime suspect, as he had admitted to witnessing smoke coming from the building and to not reporting it because he feared blame for causing it.

With Lamphere’s trial, a media circus ensued, with the opinion divided between whether Lamphere had been let in on Gunness’ schemes or whether he was just oblivious to the situation. In his own words, he had led a “pretty loose life” and was prone to drinking, but this did not mean he was privy to Gunness’ murders.

All Lamphere could be blamed for was negligence, as, at one point during the trial, a chemist found traces of strychnine in the remains of the children, which was evidence that Gunness’ kids did not perish in the fire, but from being poisoned. So, in the end, he was only charged with arson and not for the murders: burning another person’s house, regardless of whether that person might have been a serial killer, still remained a crime, and so he got a 21-year sentence.

After one year in prison, Lamphere died of tubercolosis, but, while taking confession on his deathbed, he admitted to the pastor that he did witness the murder of Andrew Helgelien, which prompted him to demand hush money from Gunness, who, instead, fired him, and when he went back to the farm to retrieve his belongings, she charged him with trespassing. What’s more, days before the fire, they had traveled to Chicago to find and bring back a housekeeper, who was believed to have become Belle’s headless body double in the fire.

Further DNA tests from 2008 proved inconclusive, as samples were too degraded to provide results, so, to this day, doubts remain about whether the headless woman is Belle Gunness or a body double.

Yet, there is one case which suggests that Gunness did indeed fake her death. In 1931, a woman named Esther Carlson died in Los Angeles while awaiting trial for poisoning a man.

She bore a striking resemblance to Gunness and was of a similar age. But the clincher is that Carlson had photographs of three children that resembled Gunness’ in her possessions.

There are theories as to why she behaved the way she did: according to an Irish TV documentary narrated by Anne Berit Vestby, in 1877, Gunness attended a country dance while pregnant. There, a man kicked her in the abdomen, which resulted into her miscarriage. The the man, who came from a rich family unlike Gunness, never faced any prosecution, and he died shortly afterwards. This, according to people who knew her, caused an abrupt change in her personality, but shortly after her attack, she went to work as a farmhand to finance her emigration to America in pursuit of the American Dream.