The Story Of Belle Star, The Oklahoma Schoolgirl Who Became A Fearsome Outlaw

There was an infamous female outlaw who rode alongside the bad boys of the Wild West. Her name was Belle Starr and she was known — and feared — as the "Bandit Queen."

In the 19th century, the Wild West had plenty of room for gangs run by the likes of Jesse James and Butch Cassidy. But these male outlaws met their match in Belle Starr, the so-called “Bandit Queen” who was a notorious horse thief and seductress.

The Birth Of Outlaw Belle Starr

Myra Maybelle Shirley was born on February 5, 1848, and grew up in Carthage, Missouri. At that point in time, the Show-Me State marked one of the westernmost frontiers in the growing United States. It proved to be an important stop for merchant trains headed westward, and so Belle Starr undoubtedly saw a lot of traders, trappers, and settlers trekking through from a young age.

Starr’s biggest influence early on was her big brother, Bud. Not content to remain within the stereotypical boundaries of feminine behavior that her private all-girls academy offered, Starr learned to ride and handle weapons from her sibling. It surely didn’t hurt that her mother was a distant cousin to the rogue Hatfields (of Hatfield and McCoy feud fame). 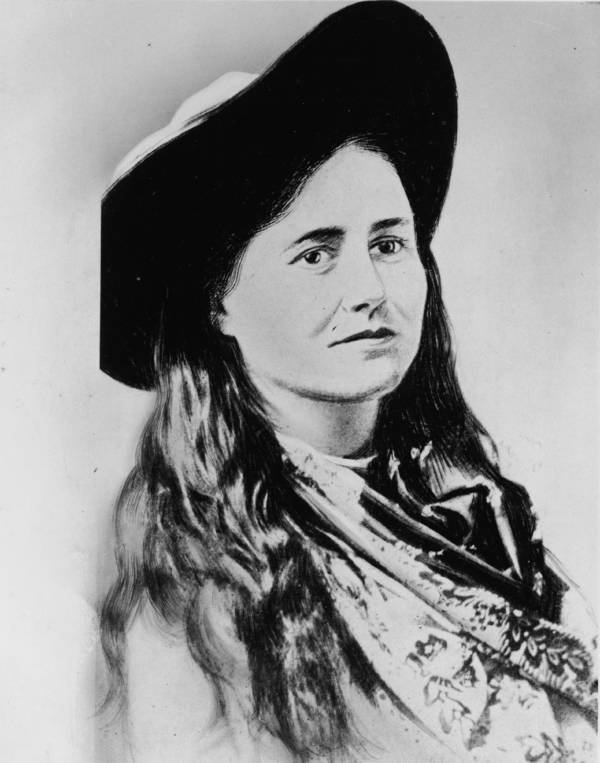 When the Civil War broke out, the Shirley clan supported the Confederacy. Bud became a guerilla fighter for Southern slaveholders attacking the Union and Starr picked up where he left off. She gathered gossip and intelligence that she passed on to her brother and her eventual husband, Jim Reed. These raiders also included Jesse James’ brother, Frank.

By venturing on a dangerous ride, Belle Starr even managed to warn Bud of a surprise attack in February 1863. He survived as a result, but everything changed soon enough.

Rising From The Ashes

In the summer of 1864, Bud Shirley died after a fight broke out between warring political factions in nearby Sarcoxie, Mississippi. Around the same time, his family tavern burned down which left the Shirley family wrecked and destitute. Starr vowed to avenge Bud, but before she knew it, her family moved to Texas and the Union won the war.

Eventually, Belle Starr hooked up again with her old Confederate raider pals, including Frank and Jesse James and Cole Younger. She galloped around with guns strapped to her hips — the perfect image of an outlaw. She allegedly also won Younger’s heart and they may have conducted a not-so-discreet love affair. 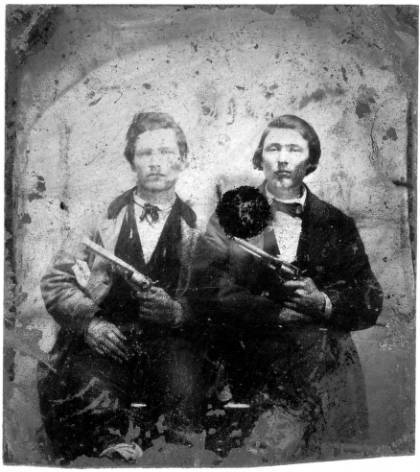 Digital Public Library of AmericaJesse and Frank James with revolvers circa 1866.

But when Starr decided to “settle down,” it wasn’t with Younger. She settled on Jim Reed, another former friend of Bud’s, in 1866. Two years later, she had a daughter named Rosie, while her husband was getting up to no good with a man named Sam Starr. Wanted for several crimes, including murder, Reed went on the run — and Starr went with him.

In between fleeing from state to territory to state, Starr had a son. Jim tortured, killed, and robbed along the way and it’s unclear how much of a role Starr played in his enterprises. Eventually, though, authorities issued warrants for her arrest for a stagecoach robbery. In 1874, the law finally caught up to Reed, when an undercover deputy killed him.

The Evolution Of Belle Starr

Belle Starr apparently didn’t mourn for long after Reed’s death. She spent her time stealing horses and frustrating the authorities to no end. Meanwhile, she added to her list of lovers, one of whom was allegedly none other than Cole Younger.

Their supposed quickie marriage — it only lasted three weeks — became only a blip on her marital record. Starr soon found another, better man: another of Reed’s former associates, the aforementioned Sam Starr. Of Cherokee descent, the Starrs married on land belonging to his Nation. 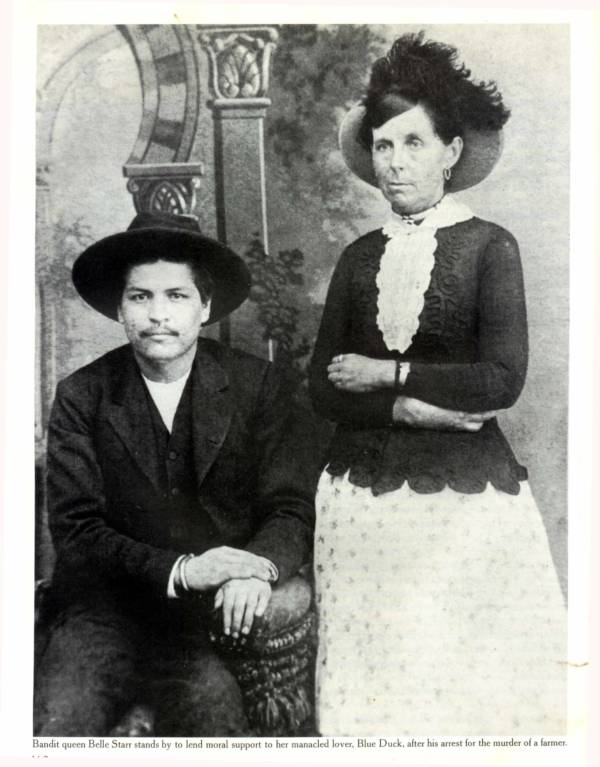 Wikimedia CommonsBelle Starr and her later in life lover Blue Duck in 1886.

The two apparently lived happily ever after for two years after their wedding, in 1882. At the time, both Starrs had gone back to bad habits allegedly stealing two horses from their neighbors. Despite facing a notoriously severe judge, they only got a bit of time in jail. He sentenced Belle Starr to two six-month terms in prison.

Once they both got out of jail, the Starrs hooked up with their old crew. They stole horses, including a mount for Jim Reed’s cousin — and wanted man — John Middleton, who then mysteriously died. Not long after pleading innocent to that charge, Starr got caught up in other crimes. She may have helped her stepson — Sam’s son by a previous marriage — rob some guys at gunpoint.

Starr allegedly carried two pistols. She wore gold earrings and a man’s hat with feathers, though some posit instead that she lived as more of a homemaker while Sam Starr committed the crimes.

Nonetheless, a cycle of criminal charges for both Belle and Sam Starr continued until Sam’s death in 1886. Her husband engaged in a duel with a lawman and each killed the other. After her loss, rumors swirled that Belle took up with a number of different outlaws ranging from a fellow named Blue Duck to Jim July, a relative of Sam. 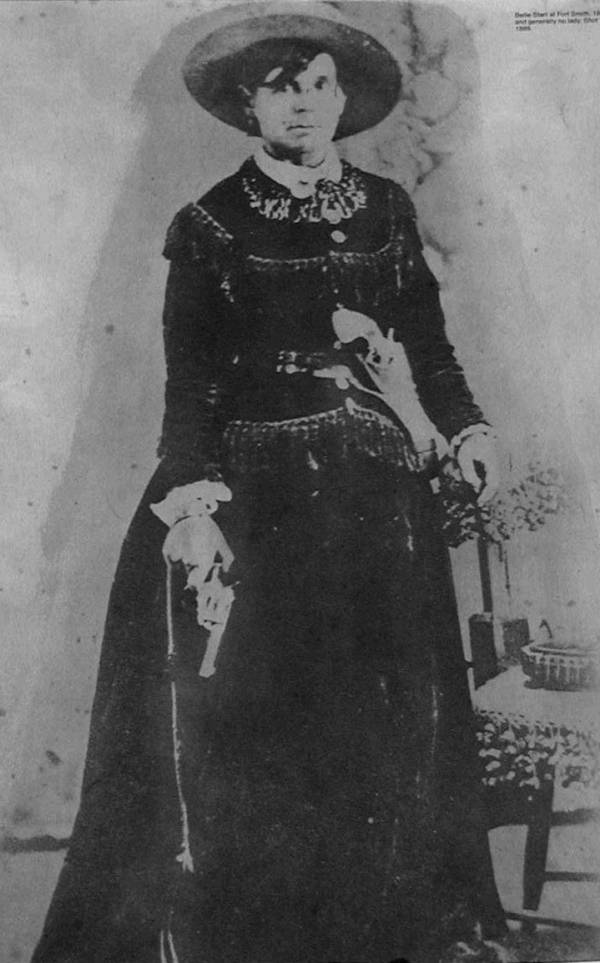 Ironically, Belle Starr became a more stand-up woman in her later years, if not exactly a purely law-abiding citizen. She and her man of the moment, Jim July, threw a guy named Edgar Watson off her land because he was wanted for murder. Watson never forgave her for the perceived slight she committed against him.

In February 1889, Belle Starr and Jim July went to Fort Smith, Arkansas. Starr went to visit friends and family, and July had to deal with horse-stealing charges. On her way home, Starr was riding solo when she was ambushed and shot twice. She died alone on the trail home. Most authorities — then and now — think the person responsible was Edgar Watson.

As Larry Wood chronicles in Wicked Women of Missouri, the shameless Watson and his wife sat in the front pews at Starr’s funeral. The authorities charged him with murder but eventually let him off due to insufficient evidence. As a result, the murder of the “Bandit Queen” officially remains unsolved to this day.

After her death, however, Belle Starr inspired plenty of Wild West legends that have kept her legacy alive. Dime-store paperbacks lauded her as a lady rogue and her reputation also begat a 1941 film, Belle Starr, The Bandit Queen, starring the glamorous Gene Tierney.

One can imagine that the renegade Belle Starr would have preferred to gallop off into the sunset on Venus, her best horse, rather than to see herself on a theatrical stage or the big screen. Nevertheless, she remains an icon more than a century later.

After learning about Belle Star, check out the amazing story of another outrageous outlaw, the gentleman bandit Black Bart. Then, see some of the most captivating photos of the American frontier.