For the first time ever, researchers have studied a near-complete skeleton of Tupandactylus navigans, a prehistoric flying reptile with a head crest that accounted for nearly half its height. 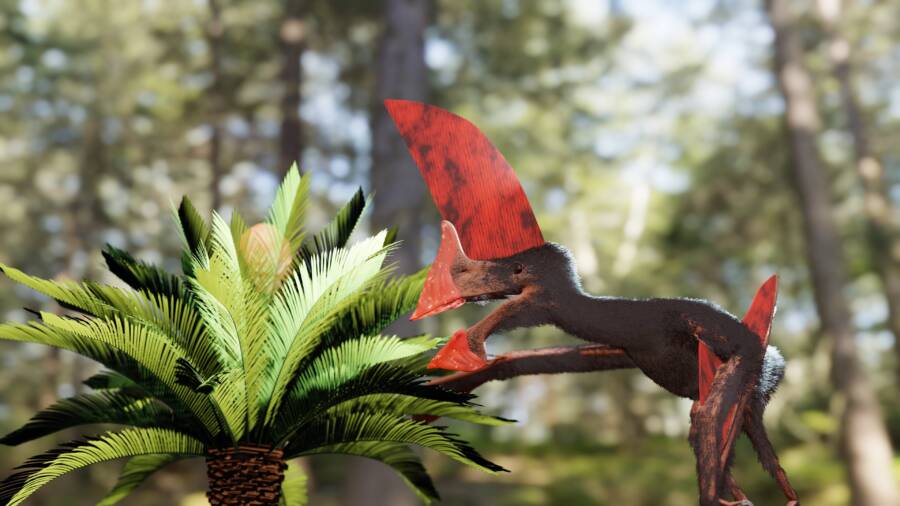 Victor BeccariAn artist’s rendering of what Tupandactylus navigans may have looked like 100 million years ago.

In 2013, the Federal Police of Brazil successfully thwarted an illegal fossil trade. The raid of Santos Harbor in São Paulo yielded about 3,000 prehistoric specimens stolen from the Araripe Basin to the north. And the recovery included six limestone slabs that contained one of the most intact pterosaur skeletons ever found.

Police carefully retrieved the limestone pieces from the barrels in which smugglers had hidden them before handing them to the University of São Paulo for analysis. Now, a paper published in the journal PLOS ONE has described this truly historic find for the first time.

The species, Tupandactylus navigans, is a prehistoric flying reptile that was only first described by experts in 2003. Until now, the entirety of scientists’ understanding of the species was based on only two skulls known to exist in the world.

Paleontologists have since dated the remarkably well-preserved fossil to 115 million years ago. For the first time, researchers weren’t limited to the animal’s skull — and were able to conduct comprehensive CT scans that revealed how this extinct creature looked and behaved. 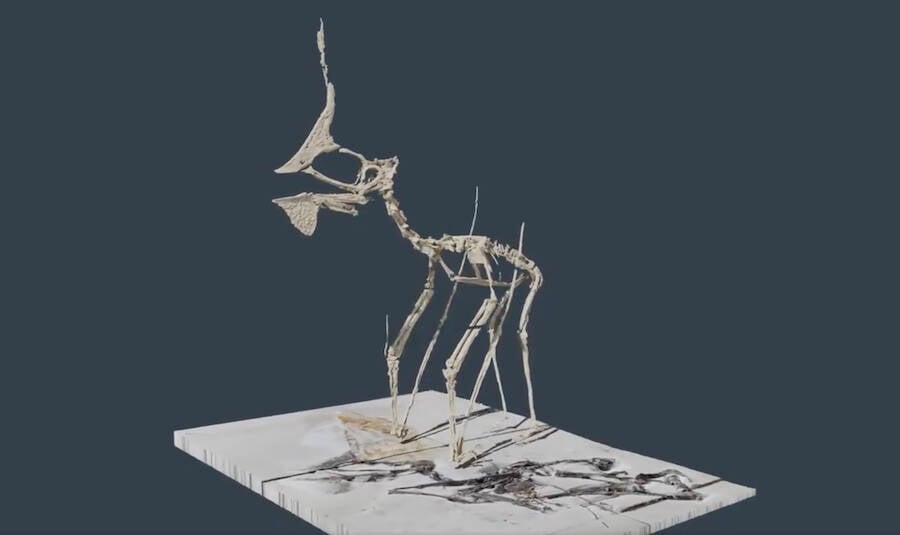 Victor BeccariA digital model of Tupandactylus navigans based on the historic CT scans.

“The specimen is exceptionally well-preserved, with over 90% of its skeleton and soft-tissue impressions of the head crest and keratinous beak,” study author and paleontologist at the University of São Paulo, Victor Becarri, told CNN. “This pterosaur was over 2.5 meters (8.2 feet) in wingspan and 1 meter (3.3 feet) tall.”

Perhaps most curious was the discovery that 40 percent of the creature’s height was accounted for by the bird’s head crest. Beccari explained that although evidence suggests that the reptile was capable of flight, the size of the crest, along with its elongated neck, likely limited the pterosaur’s flight distances.

“The skeleton shows all the adaptations for a powered flight, which the animal may have used to quickly flee predators,” said Beccari. “This specimen allows us to understand more about the complete anatomy of this animal and brings insight into its ecology.”

The study explained that Tupandactylus navigans belonged to a group of dinosaurs called tapejarids. These creatures swooped across Early Cretaceous period landscapes between 100.5 million and 145 million years ago. 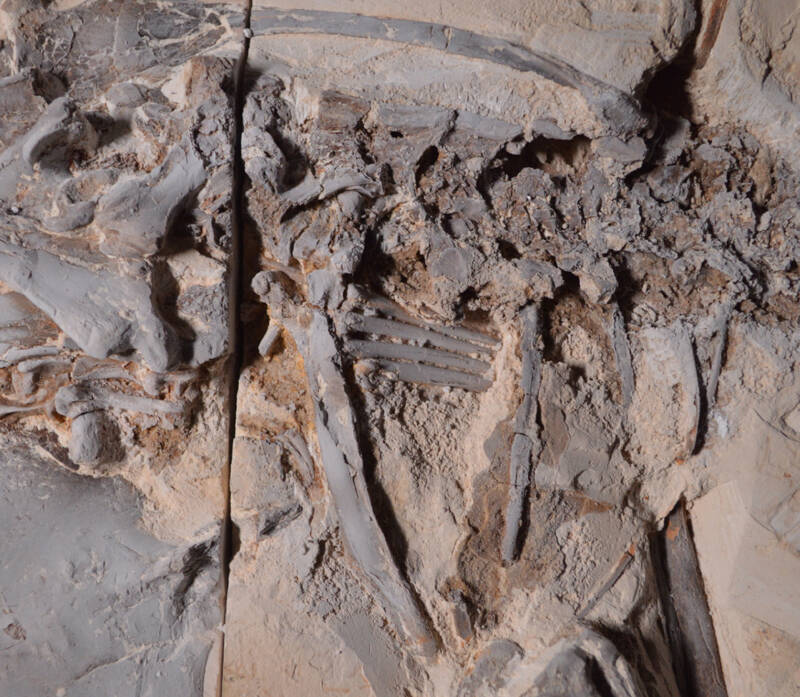 Victor BeccariThe specimen was severed and found across six limestone slabs, but pieced together in order to scan it.

While the two previously recovered skulls of this species confirmed they held giant crests atop their heads, researchers hadn’t been able to study their musculature or lower body anatomy until now. Tapejarids are fairly prevalent in Brazil’s fossil record, but complete skeletons are rare due to their thin, fragile bones.

With a near-complete fossilized skeleton on their hands, researchers were finally able to study the rest of this creature’s body and properly explore how it was able to fly. Despite such an oversized crest on its head, it appeared that the notarium, a bone helping the animal’s chest withstand wing movement, allowed it to fly.

Beccari and his time ultimately only began studying this fossil in 2016, and they used CT scans to create a three-dimensional model of the pterosaur’s bones. The images also detailed highly-developed musculature in its arm bones, with experts believing the pterosaur was capable of short flights but mostly foraged for fruits and seeds on the ground.

“With such a tall head crest and a relatively long neck, this animal may have been restricted to short-distance flights,” said Beccari. 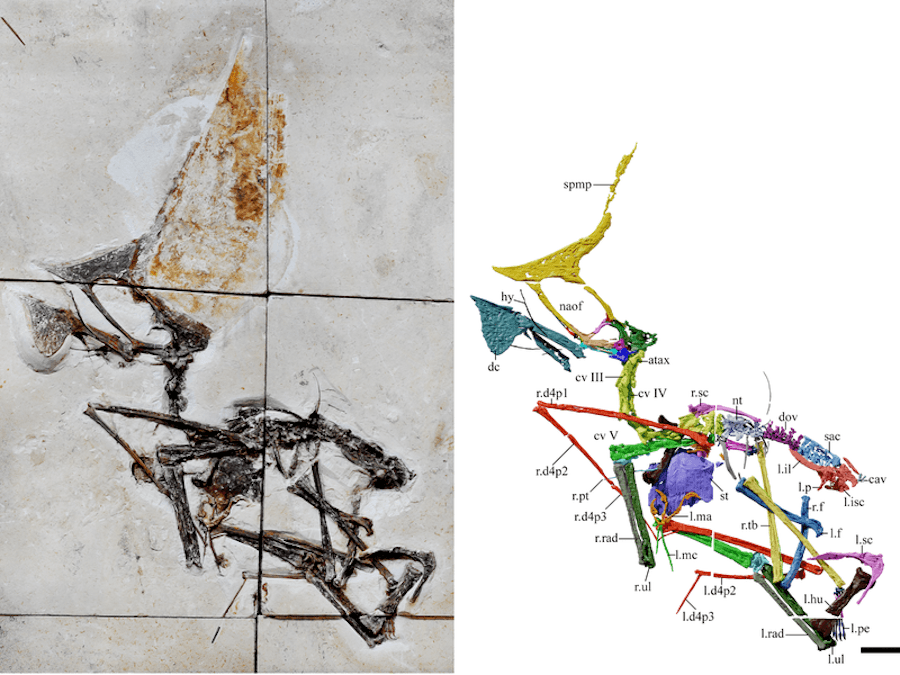 Since previous studies purported that tapejarids had short and sturdy necks to support these enormous heads during flight, the recovery of this fossil and subsequent study has forced paleontologists to reassess. Now, Beccari posits this species operated more like peacocks or chickens than traditional birds.

Ultimately, this is the first time in history that experts like Beccari have gotten their hands on a complete skeleton of the long-extinct species. Despite its severed state across six individual limestone slabs, it was pieced together like a puzzle, scanned, and studied without issue — to historic results.

As it stands, that pieced-together remnant from the Cretaceous period is on display at the Geosciences Museum in São Paulo — after nearly being lost to private collectors for good.

“Fossils in Brazil are protected by law,” Beccari explained. “They are part of the geological heritage of our country.”

After reading about the near-complete pterosaur fossil confiscated during a police raid, learn about Italian customs officials seizing a 159-million-year-old dinosaur egg. Then, read about the new dinosaur with a star-like skull being named after David Bowie.