Around 1877, Doc Holliday met Big Nose Kate at a saloon in Texas — and embarked on a decade-long love affair that saw the couple in violent fights, shootouts, and behind bars. 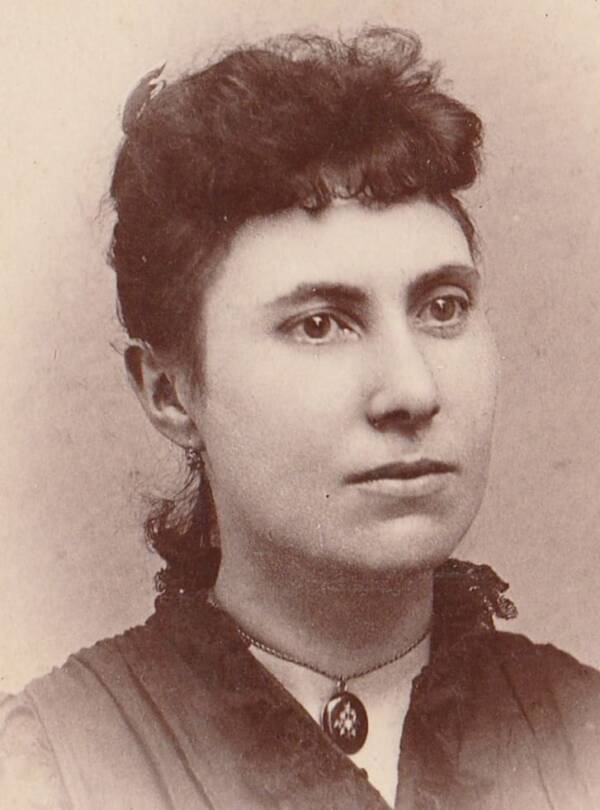 Wikimedia CommonsThe relationship of Big Nose Kate and Doc Holliday was one for the history books, but Kate’s story was exciting even on its own.

In most accounts of the Wild West, Mary Katherine Horony exists as a footnote. But Big Nose Kate, as she was called, was more than Doc Holliday’s fiery love interest. She has a Wild West legend all her own.

Like the men who routinely populate frontier tales, Big Nose Kate went west to reinvent herself. Independent, fearless, and comfortable holding a pistol, she racked up adventures as a dance-hall girl, a prostitute, and the owner of a hotel.

By the time she died at the age of 89 in 1940, Big Nose Kate had seen the Wild West come and go — and unlike so many of her male counterparts, she’d lived to tell the tale.

Nothing about Big Nose Kate’s early life suggested she’d one day tear through the Wild West. Born Mária Izabella Magdolna Horony on Nov. 9, 1849, the legend spent the first ten years of her life in the Kingdom of Hungary, or present-day Slovakia.

In 1860, the Horony family — including Kate, her parents, and her seven siblings — left Europe in pursuit of the American dream. They settled in Davenport, Iowa, where Horony’s father planned to practice medicine. 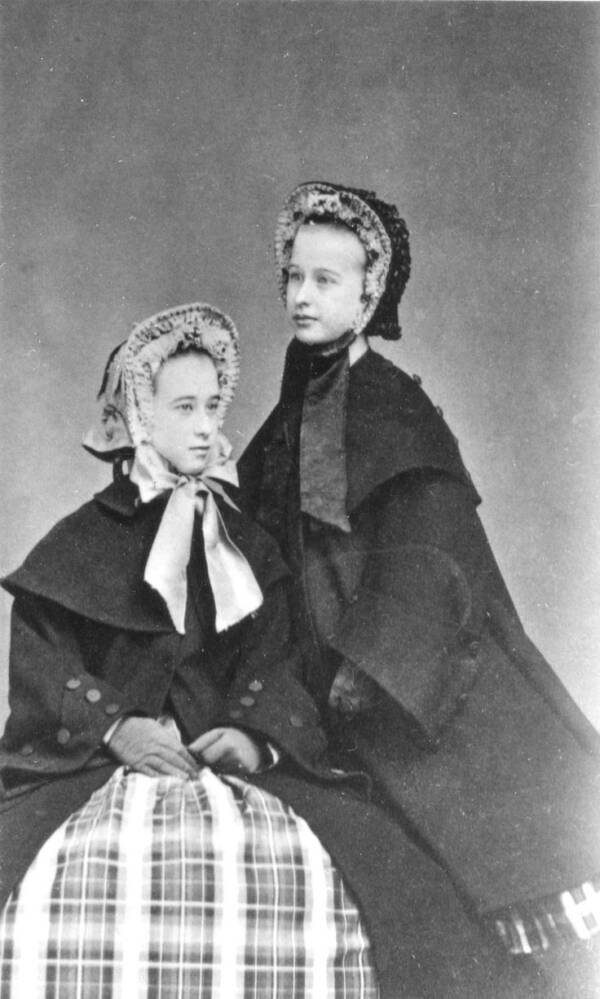 Wikimedia CommonsMary Katherine Horony, seated, at around the age of 15.

But their dream became a nightmare when both of Horony’s parents died, one after the other. Horoney and her siblings were sent to foster care, and Kate ended up under the supervision of a man named Otto Schmidt. When Schmidt tried to rape Kate, she reportedly hit him with an ax handle and fled.

Determined to get as far away as possible, Kate snuck on a steamship bound for St. Louis, Missouri, and renamed herself “Kate Fisher” after the ship’s captain. She reportedly spent the next several years trying on new identities — first as a would-be nun at Ursuline Convent, then as a wife and mother.

When her husband and child died of yellow fever — their existence has never been confirmed, however, other than by Kate herself — Kate turned to prostitution. She worked for a St. Louis madame, and then drifted to Dodge City where she found work with none other than Tombstone lawman Wyatt Earp’s sister-in-law. Together, they made their way south to Fort Griffin, Texas.

It was here where Big Nose Kate made the most significant connection of her life. While in Texas, she met a dentist with tuberculosis and a temper named John Henry “Doc” Holliday.

The Love Story Of Big Nose Kate And Doc Holliday 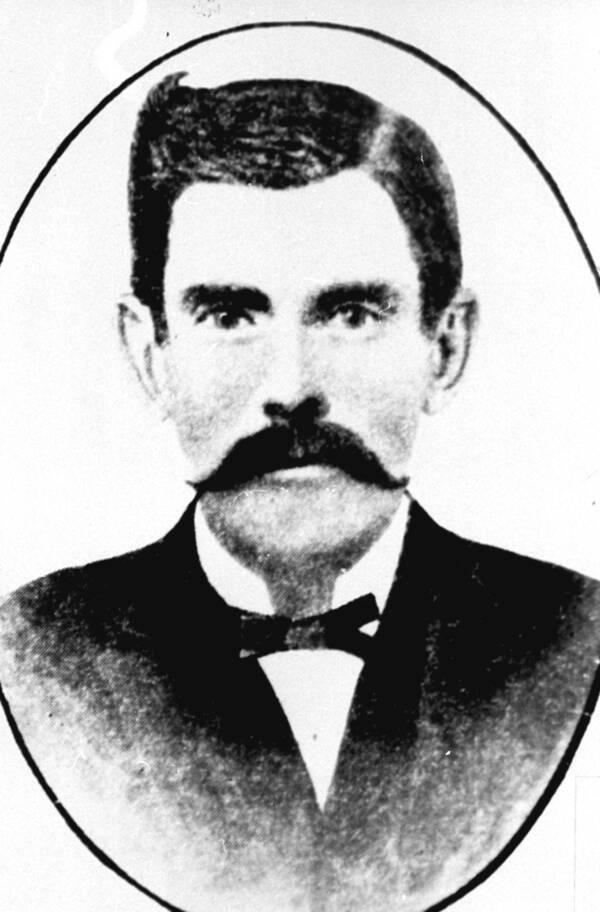 Kate liked Holliday’s reckless sophistication. Holliday was drawn to Kate’s voluptuous beauty, intellect, and independence. Plus, both had — for better and for worse — fiery tempers. Over the years they fought, split, reunited, perhaps got married, and fought some more.

“You know, I had to quiet her Wyatt,” Holliday complained to Wyatt Earp on one occasion after he’d fought with Kate. “I just hit her gently over the head with the butt end of my gun, had to quiet her.”

But they made a good couple in the quick-trigger days of the Wild West, nonetheless. When Holliday was arrested in Fort Griffin during a poker game — possibly for stabbing a cheat in the stomach and possibly for drinking liquor which was prohibited while gambling — Kate rose to the occasion.

Stealthily lighting a fire in town, Kate quietly watched as people rushed to contain it. Then, she went to the hotel where Holliday was being held, threatened his guards with two pistols, and spirited him to freedom.

Riding on stolen horses, they made their way to Dodge City and promised each other to give up prostitution and gambling — promises that neither kept for long.

She also, fatefully, introduced Holliday to lawman Wyatt Earp and his brothers — a move Kate later regretted. “The Earps had such a power I could not get Doc away from them,” she lamented.

By 1880, Doc Holliday and Wyatt Earp had made their way to the volatile Wild West town of Tombstone, Arizona. Kate lived nearby in the town of Globe, where she ran a hotel.

Though she and Holliday maintained a tumultuous relationship, she was waiting in his room after the legendary Gunfight at the OK Corral. “That was awful,” Kate claimed that Holliday told her, weeping. “Just awful.”

They split again when Kate, in a drunken rage, helped implicate Holliday for murder. But by the time the dentist died of tuberculosis at the age of 36 in 1887 in Colorado, she had returned to his side.

Kate’s story, however, didn’t end there.

The Final Years Of A Wild West Legend

By the time Doc Holliday died, the days of the Wild West were quickly fading. Civilization’s long, persistent reach was uncoiling west, taming the towns on the frontier. But Big Nose Kate had spent her life reinventing herself. And as the times changed, she changed with them. 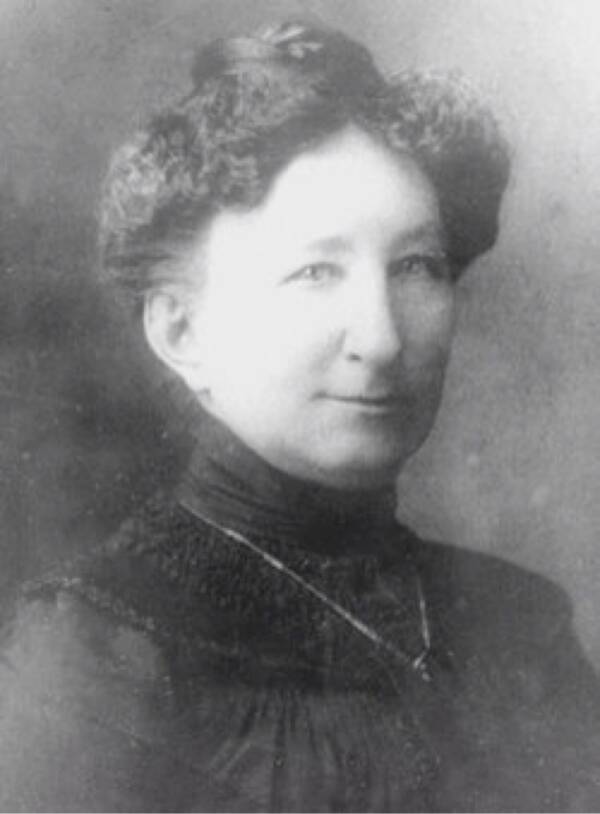 Wikimedia CommonsBig Nose Kate at around the age of 40. Circa 1890.

In 1888, Kate married a blacksmith named George Cummings. It was an unhappy, brief marriage — and Kate later implied that Cummings was an alcoholic, but it gave Kate her final identity, the name inscribed on her tombstone: Mary Katherine Horony Cummings.

Following the end of her marriage, Kate drifted to Cochise, Arizona, where she worked as a housekeeper at the Cochise Hotel. She then found steady work as the housekeeper of a miner, John J. Howard, who kept her employed for 30 years and left her everything when he died.

But that wasn’t much — and by then, Kate was an old woman. With a glimmer of her former frontier mischief, Kate applied to Arizona’s Pioneers Home in Prescott, a caring facility, massaging the truth to ensure her admission.

Since the Pioneers Home only accepted American citizens, Kate claimed she was born in Iowa. And when she listed her marriages, she included Doc Holliday — though they likely had a common-law marriage. Kate was, nevertheless, accepted. She spent the rest of her life at the Pioneers Home before her death on Nov. 2, 1940, five days before her 90th birthday. 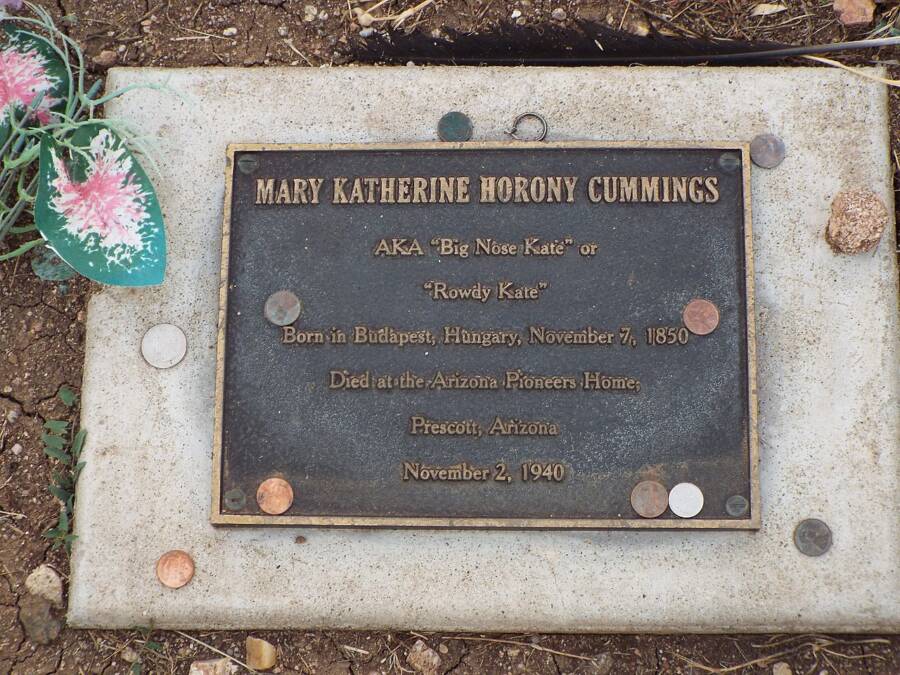 Wikimedia CommonsKate’s nickname followed her to the grave.

In her final years, Big Nose Kate rarely discussed Tombstone, Dodge City, Doc Holliday, or any of her other Wild West adventures. She dictated her autobiography to Dr. Albert W. Bork, a local historian, in 1935, but otherwise stayed tight-lipped about her past.

Today, Big Nose Kate is often seen as a “sidekick” to Doc Holliday — if she’s mentioned at all. But she lived a life worthy of the annals of the frontier. Kate could drink, shoot a gun, and fend for herself. Like the men who populate pioneer tales, she was flawed, passionate, and eager to live life on her own terms.

Of her own Wild West legend, Big Nose Kate had little to say. But looking back over her years as a teenage runaway, a dance-hall girl, a prostitute, and the lover of Doc Holliday, she noted of her life:

“Part is funny and part is sad, but such is life any way you take it.”

After reading about the adventures of Big Nose Kate, learn about the legendary Black deputy named Bass Reeves. Or, look through this list of 10 iconic Wild West figures.