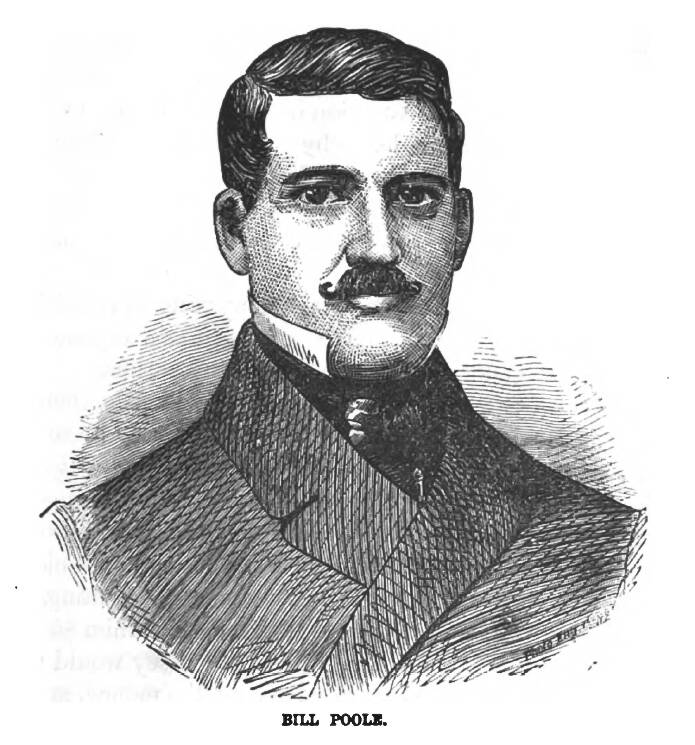 Bill “The Butcher” Poole was one of the most notorious anti-immigrant gangsters in American history. His bullying, violent temperament inspired the main antagonist in Martin Scorsese’s Gangs of New York but it ultimately led to his murder at age 33.

New York City was a very different place in the mid-1800s, the kind of place where a egotistical, knife-wielding pugilist could win a place in the hearts — and tabloids — of the city’s masses.

Then again, maybe it wasn’t so different.

William Poole: The Brutal Son Of A Butcher 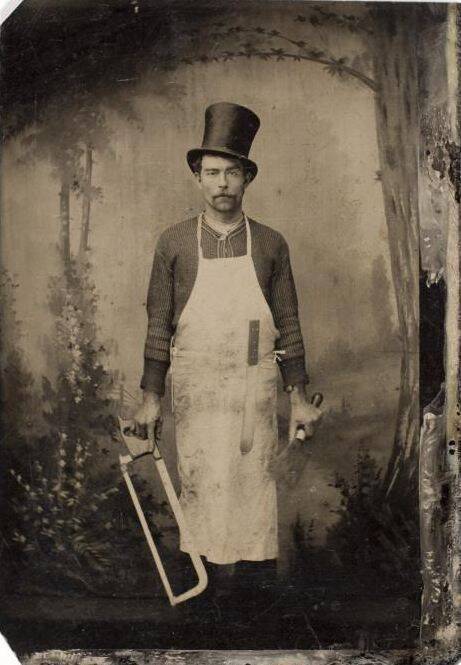 It should be noted that Bill the Butcher’s history is steeped in lore and stories which may or may not be true. Many of his major life events — including his fights and his murder — have yielded conflicting accounts.

What we do know is that William Poole was born on July 24, 1821, in northern New Jersey, the son of a butcher. At about age 10, his family moved to New York City, where Poole followed his father’s trade and eventually took over the family shop at the Washington Market in Lower Manhattan.

By the early 1850s, he was married and had a son named Charles, living in a small brick house at 164 Christopher Street, right by the Hudson River.

William Poole was six feet tall and more than 200 pounds. Well-proportioned and quick, his handsome face sported a thick mustache.

He was also tempestuous. According to the New York Times, Poole frequently quarreled, was considered a hard customer, and loved to fight.

“He was a fighter, ready for action on all occasions when he fancied he had been insulted,” wrote the Times. “And while his manners, when he was not aroused, were generally marked with much politeness, his spirit was haughty and overbearing….He could not brook an insolent remark from one who thought himself as strong as he.”

Poole’s dirty fighting style made him widely admired as one of the best “rough and tumble” pugilists in the country. He was particularly keen on gouging an opponent’s eyes out and was known to be very good with knives, due to his line of work. 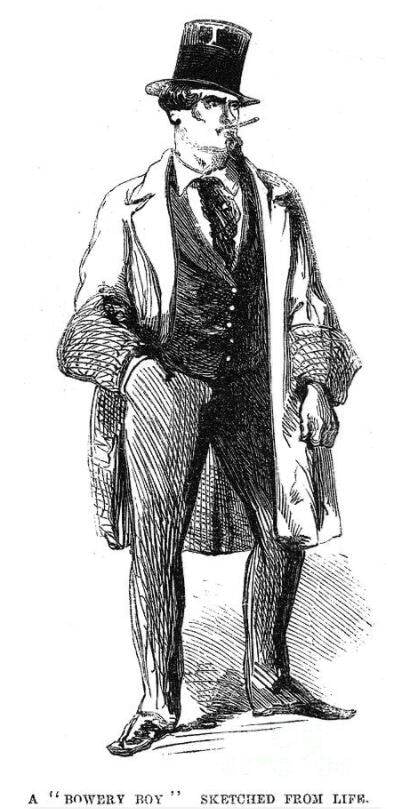 William Poole became a leader of the Bowery Boys, a nativist, anti-Catholic, anti-Irish gang in antebellum Manhattan. The street gang was associated with the xenophobic, pro-Protestant Know-Nothing political movement, which flourished in New York in the 1840s and 50s.

The public face of this movement was the American Party, which maintained that the droves of Irish immigrants fleeing famine for the United States would ruin the U.S.’s democratic and Protestant values.

Poole, for his part, became a lead “shoulder-hitter,” enforcing the nativists’ rule at the ballot box. He and other Bowery Boys would get into frequent street fights and riots their Irish rivals, grouped under the name “Dead Rabbits.” 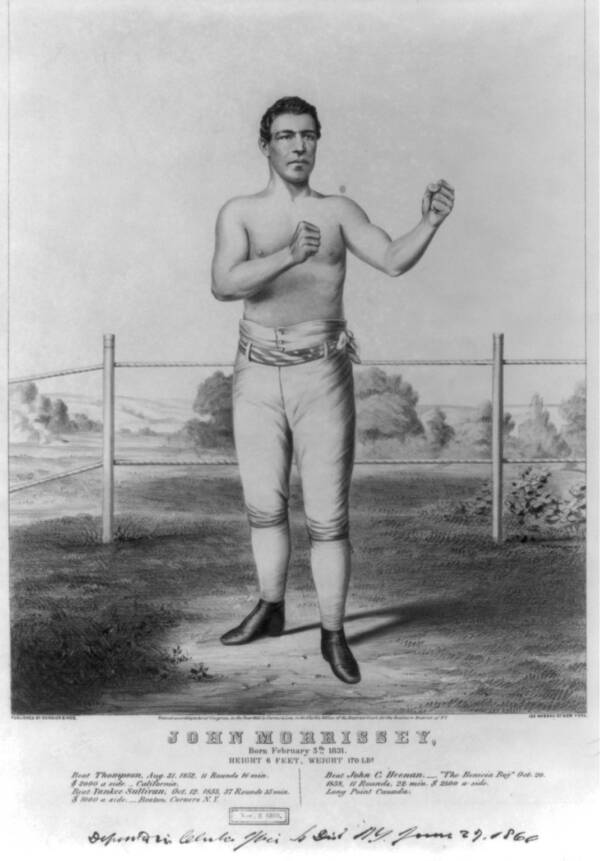 Poole’s main archnemesis was John “Old Smoke” Morrissey, an Irish-born American and bare-knuckle boxer who won a heavyweight title in 1853.

A decade younger than Poole, Morrissey was a prominent shoulder-hitter for the Tammany Hall political machine that ran the Democratic Party in New York City. Tammany Hall was pro-immigrant; by the mid-19th century, many if not most of its leaders were Irish-American.

Both Poole and Morrissey were arrogant, violent, and bold, but they occupied different sides of the political coin. Partisan differences and bigotry aside, because of their egos, deadly conflict between them seemed inevitable.

Poole’s and Morrissey’s rivalry came to a head in late July 1854 when the two crossed paths at the City Hotel.

“You dare not fight me for $100 — name your place and time,” Morrissey reportedly said.

Poole set the terms: 7 o’clock the following morning at the Amos Street docks (Amos Street is the former name of West 10th Street). At daybreak, Poole arrived in his rowboat, met by hundreds of people clawing for some entertainment on a Friday morning.

Spectators doubted whether Morrissey would show up, but at about 6:30 a.m. he appeared, eyeing his adversary. 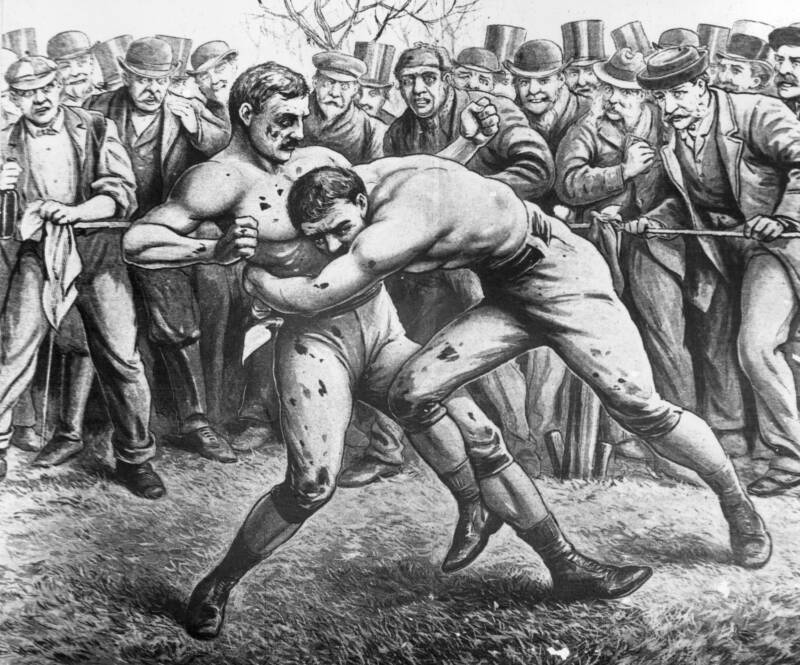 The two circled each other for about 30 seconds until Morrissey thrust his left fist forward. Poole ducked, seized his enemy by the waist, and threw him to the ground.

Poole then fought as dirty as one might imagine. Atop Morrissey, he bit, tore, scratched, kicked and punched. He gouged Morrissey’s right eye until it streamed with blood. According to the New York Times, Morrissey was so disfigured “that he was scarce recognized by his friends.”

“Enough,” Morrissey cried, and he was shuttled away while his opponent enjoyed a toast and absconded on his rowboat.

Some accounts hold that Poole’s supporters attacked Morrissey during the fight, thus giving the Butcher a cheated victory. Other maintained that Poole was the only one who touched Morrissey. We’ll never know the truth.

Either way, Morrissey was a bloody mess. He retreated to a hotel about a mile away on Leonard Street to lick his wounds and plot revenge. As for Poole, he headed to Coney Island with his friends to celebrate.

Murder At The Stanwix

At about 10 p.m., Morrissey was in the back room of Stanwix Hall, a saloon that catered to partisans of all political persuasions in what is now SoHo, when Poole entered the bar. Hearing his nemesis was there, Morrissey confronted Poole and cursed at him.

There are conflicting accounts of what happened next, but guns came into play, with one account stating that Morrissey drew a pistol and snapped it three times at Poole’s head, but it failed to discharge. Others maintained that both men drew their pistols, daring the other to shoot.

The bar’s owners called the authorities, and the men were taken to separate police stations. Neither was charged with a crime, and they were both released shortly after. Poole returned to Stanwix Hall, but it’s unclear where Morrissey went. 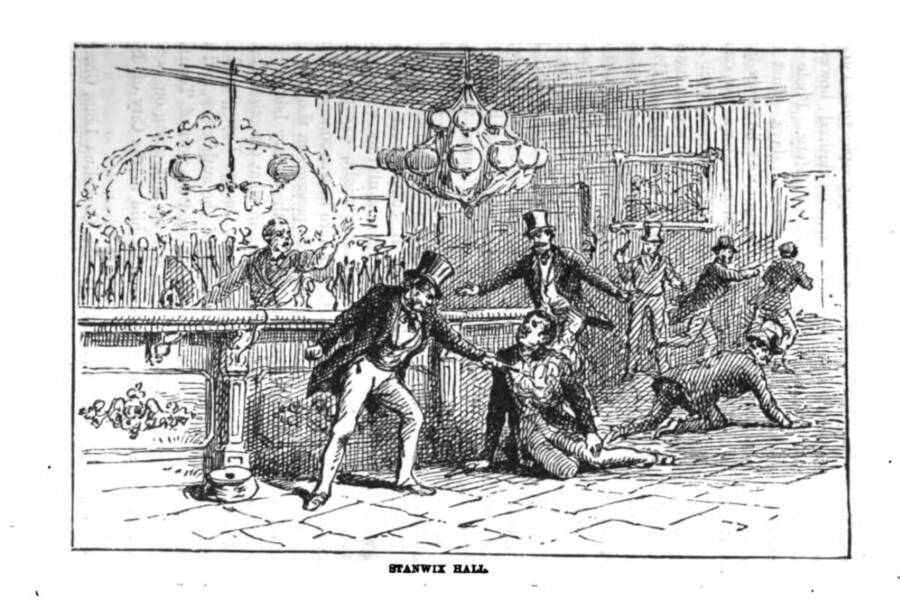 Poole was still at Stanwix with friends when between midnight and 1 a.m., six of Morrissey’s cronies entered the saloon — including Lewis Baker, James Turner, and Patrick “Paudeen” McLaughlin. Each one these street toughs had either been beaten up or humiliated by Poole and his cronies.

According to Herbert Asbury’s 1928 classic, The Gangs of New York: An Informal History of the Underworld, Paudeen tried to bait Poole into a fight, but Poole was outnumbered and refused, despite Paudeen spitting at his face three times and calling him a “black-muzzled bastard.”

James Turner then said, “Let us sail into him anyhow!” Turner threw aside his cloak, revealing a large Colt revolver. He drew it out and aimed it at Poole, steadying it over his left arm.

Turner squeezed the trigger, but he was jostled. The shot accidentally went through his own left arm, shattering the bone. Turner fell to the floor and fired again, hitting Poole in the right leg above the kneecap and then the shoulder.

Bill the Butcher tottered for the door but Lewis Baker intercepted him — “I guess I will take you any how,” he said. He shot Poole in the chest.

“I Die A True American.”

It took 11 days for William Poole to die. The bullet didn’t penetrate his heart but rather lodged into its protective sac. On March 8, 1855, Bill the Butcher finally succumbed to his wounds.

His reported last words were, “Goodbye boys, I die a true American.”

Poole was buried at Green-Wood Cemetery in Brooklyn on March 11, 1855. Thousands of his supporters came out to bid him farewell and take part in the procession. The murder made quite a stir and nativists saw Poole as an honorable martyr to their cause.

The New York Herald dryly commented, “Public honors on a most magnificent scale were paid to the memory of pugilist — a man whose past life has in it much to condemn and very little to commend.”

Martin Scorsese’s Gangs of New York doesn’t quite get the facts right when it comes to Bill the Butcher, but it does capture his ruthless spirit.

After a manhunt, Poole’s murderers were arrested, but their trials ended in hung juries, with three of the nine jurors voting for acquittal.

Bill the Butcher is mostly remembered today by the villainous performance of Daniel Day-Lewis in Gangs of New York. Lewis’s character, Bill “The Butcher” Cutting, was inspired by the real William Poole.

The film is loyal to the spirit of the real Bill the Butcher — his cantankerousness, his charisma, his xenophobia — but diverges from historical fact in other aspects. While the Butcher is 47 years old in the film, for example, William Poole died at age 33.

In such a short time, he ensured his name would be remembered in infamy for generations to come.

After reading about William Poole, the real-life “Bill the Butcher,” check out these 44 gorgeous colorized photos of century-old New York City. Then, learn all about the heinous crimes of Robert Berdella, the “Kansas City Butcher.“