Just two days after Juan Gerardi produced a massive report detailing his country's wartime atrocities, three members of the military killed him in his home. That's the official story, at least. 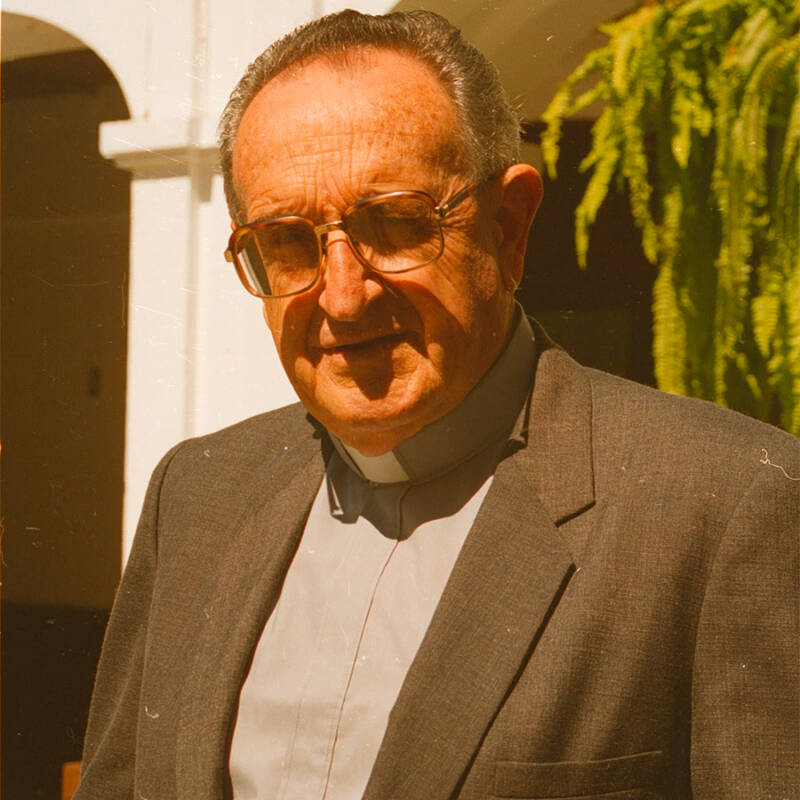 HRD MemorialGuatemalan bishop and indigenous rights advocate Juan Gerardi fought to give a voice to the indigenous Mayan peoples targeted by Guatemala’s military dictatorship during the country’s 36-year-long civil war.

On April 26, 1998, Bishop Juan Gerardi was bludgeoned to death with a concrete slab inside his home in Guatemala City so savagely that he could only be identified by the ring he wore to signify his position.

A prominent Catholic bishop and human rights advocate, Gerardi had spent his life advocating for others. But sadly, those demanding justice for his murder were unable to point to any clear villains; or, rather, there were simply too many to point to. As it turns out, standing up for indigenous rights in Guatemala in the 1990s made you more enemies than you might think.

This was especially true because the country was emerging from a brutal, decades-long civil war and this bothersome bishop was trying to hold a politically corrupt military junta accountable for genocide against those indigenous populations.

Now, the controversy surrounding his murder is finally being reexamined, with the HBO documentary The Art Of Political Murder seeking to reopen wounds that have still barely healed in Guatemala. But what was it about Juan Gerardi’s work and his murder that makes it so contentious more than 20 years later? 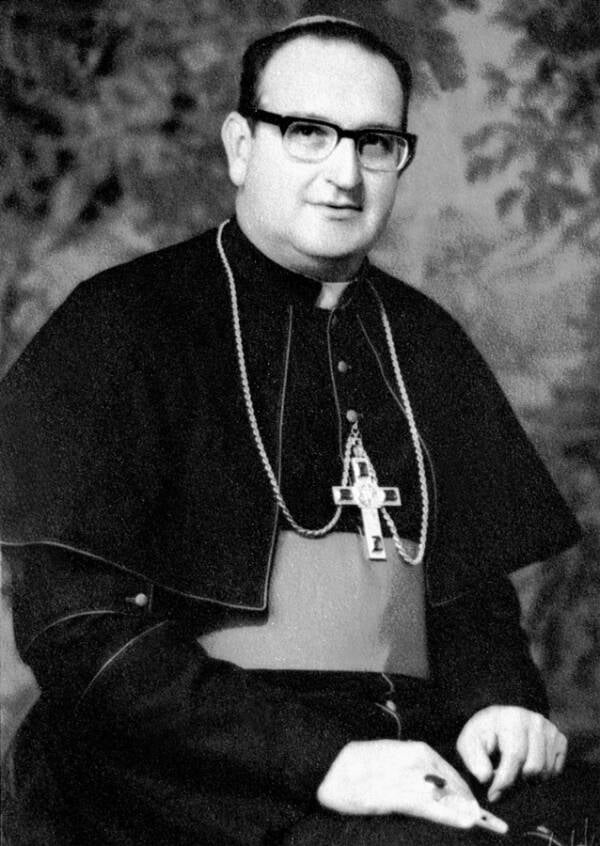 Archbishop’s Office for Human Rights/Getty ImagesDuring his service in the church, Bishop Juan Gerardi was an outspoken opponent of the growing violence perpetrated by the Guatemalan military against indigenous civilians.

In 1960, the Guatemalan Civil War erupted between the federal government and Marxist-aligned rebel groups who were supported by indigenous Mayans and poor mestizo communities in rural areas who believed they had long been oppressed by their leaders and military. Fought over the course of the next 36 years, the war was long, brutal, and largely one-sided.

In the early years of the war, a Catholic clergyman named Juan José Gerardi Conedera — born 1922 in Guatemala City — had been appointed bishop of the northern diocese of Verapaz. This diocese covered the rural mountain territories, an area with strong support for the Marxist guerilla groups fighting the federal government.

At more than six feet tall with broad shoulders, Bishop Gerardi was an imposing figure physically but he was best known for his humility and warm sense of humor.

“In a meeting with him, you would get this whole repertoire of jokes,” Father Mario Orantes told police following his murder in 1998. “I wish you could have known him.”

Most of Bishop Juan Gerardi’s parishioners were upper-class plantation owners descended from the area’s original colonial settlers but the majority of the surrounding diocese’s population was descended from the Mayan indigenous group known as Q’eqchi. Bishop Gerardi’s broad popularity was rooted in his ability to balance his pastoral mission as a bishop, even to the upper classes, and his duty to serve the needs of the marginalized people of his diocese. 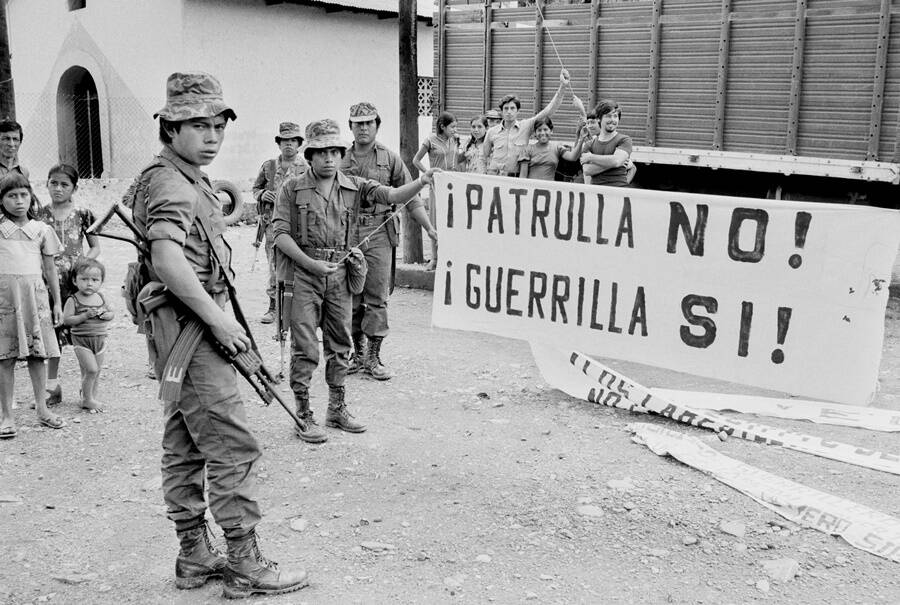 Robert Nickelsberg/Getty ImagesGuatemalan soldiers show captured banners made by a militant guerrilla group in Huehuetenango, Guatemala during the civil war. The fighting between the military and insurgents ravaged villages in the remote parts of the country.

He reached out to the indigenous communities by holding masses spoken in Mayan languages, training his priests to learn Q’eqchi, and sponsored Q’eqchi-speaking catechists.

In 1974, after he was made Bishop of Quiché, where the ravages of Guatemala’s civil war against indigenous Mayan villages were especially brutal, Gerardi issued a statement condemning the violence and human rights abuses perpetrated by the military against Q’eqchi civilians.

His vocal opposition to the military’s genocidal campaign — and, by extension, the Guatemalan government — made him many enemies in powerful places. He received numerous death threats and miraculously survived an assassination attempt before going into a self-imposed exile in Costa Rica for several years in the early 1980s.

The Brutal Assassination Of Bishop Gerardi 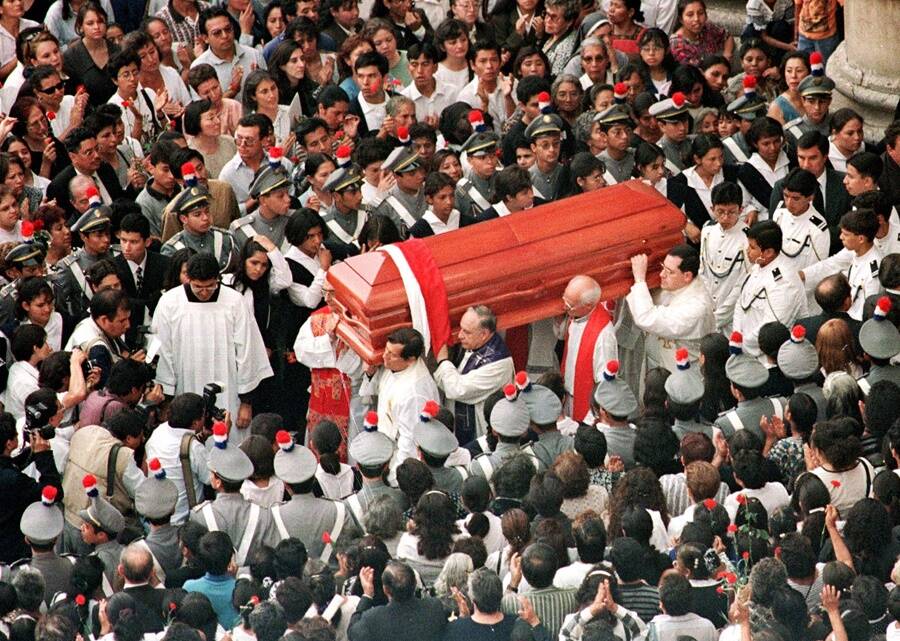 In 1996, the Guatemalan Civil War officially ended after both sides signed a peace accord supervised by the United Nations. But before the conflict was over, Bishop Juan Gerardi launched his most important effort: the Recovery of Historical Memory Project (REMHI).

REMHI’s goal was to collect as much evidence of the Guatemalan military’s human rights violations against the indigenous Mayan civilians throughout the war. The exhaustive report involved a three-year investigation under the Human Rights Office of the Archbishop of Guatemala (ODHAG).

The result was a report titled Guatemala: Never Again which documented the 422 massacres that the church investigation was able to uncover. The 1,400-page document included testimony from 6,500 witnesses and data on more than 55,000 violations of human rights.

In total, according to the report, there had been 150,000 deaths plus 50,000 disappearances during the 36-year civil war. At least 80 percent of these human rights abuses and killings were linked to the Guatemalan military and associated paramilitary organizations. 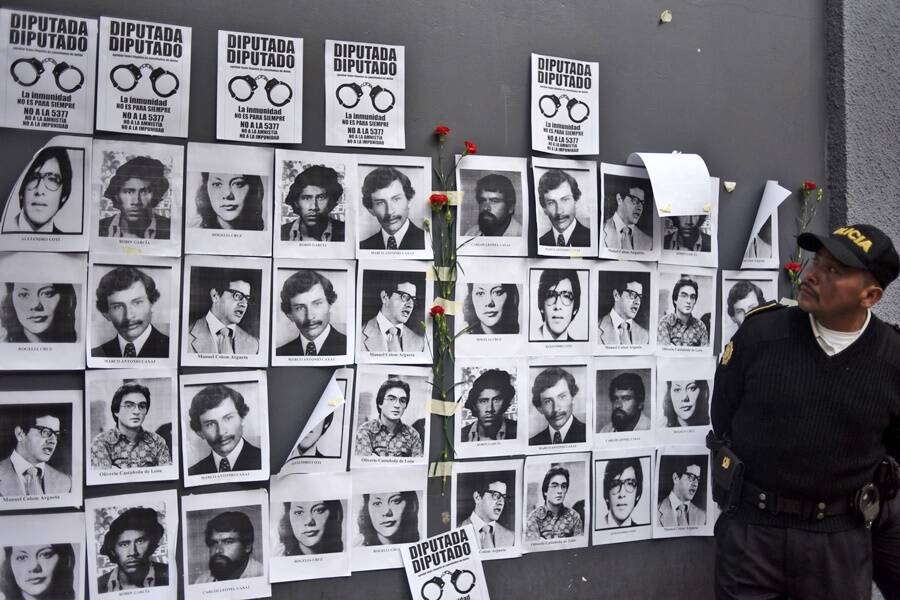 Johan Ordonez/AFP via Getty ImagesAccording to Gerardi’s report, more than 150,000 civilians died at the hands of the Guatemalan military during the civil war.

Moreover, the report identified those believed to be directly responsible for these atrocities by name — a bold move that may have sealed Gerardi’s fate.

“As a church, we collectively and responsibly assumed the task of breaking the silence that thousands of victims have kept for years,” Gerardi said during a public presentation of the damning report. “We made it possible for them to talk, to have their say, to tell their stories of suffering and pain so they might feel liberated from the burden that has been weighing down on them for so long.”

Two days after the public announcement, on April 27, 1998, Gerardi was found dead at his residence in Guatemala City, his body covered in blood and his head beaten in with a concrete block.

The Mystery Of Who Killed The Bishop

At least 10,000 Guatemalans paid their respects at Bishop Gerardi’s funeral.

The news of Bishop Juan Gerardi’s death sent shockwaves throughout Guatemala and beyond. For those dedicated to protecting human rights around the world, there was no doubt about the killers’ motives.

“To me, the murder is a direct response to the report and its name, an attempt to say you can go this far but no further,” said Frank LaRue, the director of the Guatemalan Center for Human Rights Legal Action. “In just a couple of days, we went from ‘never again’ to ‘here we are all over again, and don’t think you will be rid of us so easily.'”

Indeed, Bishop Juan Gerardi’s death wasn’t merely a tragic loss to the communities he served, it was a reminder of the very real price one paid for standing up to the powerful military and ruling class. 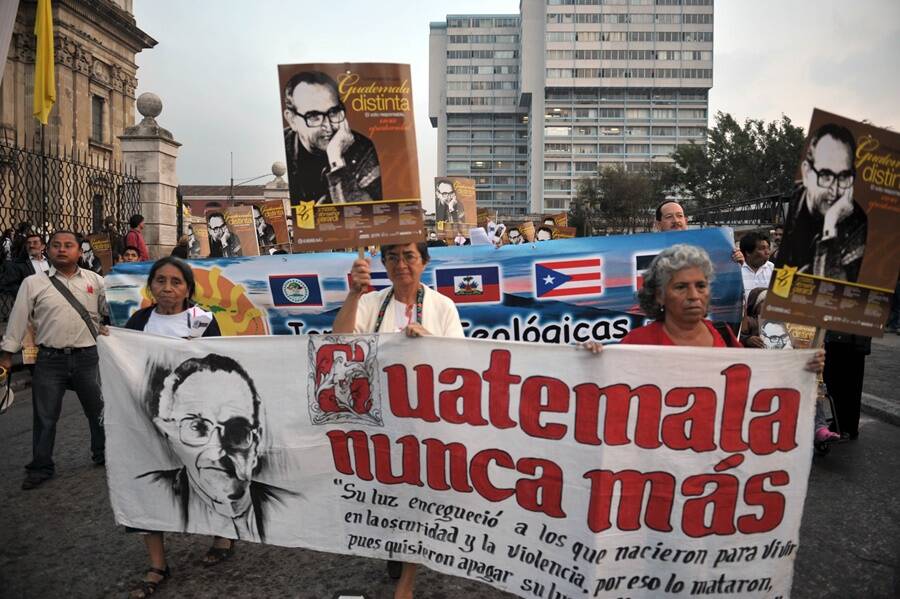 Johan Ordonez/AFP via Getty ImagesWomen carry a banner during a march to commemorate the 13th anniversary of Bishop Juan Gerardi’s assassination.

“We are very concerned about the security of the people in the communities who talked to us,” said Edgar Gutierrez, executive director of the church’s REMHI project and a close friend of the bishop. “The killing of Bishop Gerardi is like a green light to all those in the military patrols who participated in massacres or committed torture during the war.”

In an unexpected twist, Father Orantes, who discovered the bishop’s body and spoke highly of him to the police during his witness interview in 1998, was implicated in the murder by the government, with officials reporting “discrepancies” in his account of events. He was also sentenced to prison, though he maintained his innocence throughout the proceedings.

The prosecution was hailed internationally as a victory but many remained skeptical that the real killers, those who ordered the murder of the bishop, had never faced justice. Who can blame them? Prosecutors received death threats, judges were attacked in their homes, and potential witnesses died under mysterious circumstances; someone wanted this case closed and put away for good.

Was The Military Behind The Bishop’s Murder?

It would be perfectly reasonable to conclude that someone high up in the Guatemalan military ordered Bishop Juan Gerardi killed, but there are those who believe otherwise.

Journalists Maite Rico and Bertrand de la Grange argue that their investigation into the case points toward political enemies of then-President Alvaro Arzú — who had signed the 1996 peace deal ending the war — in an attempt to discredit his administration. Two of the three military officers sent to prison for the bishop’s killing had served under Arzú.

Others believed it was a gang-related murder, given the inexplicable presence of Ana Lucía Escobar — who was connected to the Valle del Sol gang and also the likely illegitimate daughter of a prominent Catholic clergyman — when police arrived at the crime scene.

There were even vague rumors that Gerardi was killed because he found out about a sex ring involving Catholic clergymen, though this theory has always remained fuzzy. 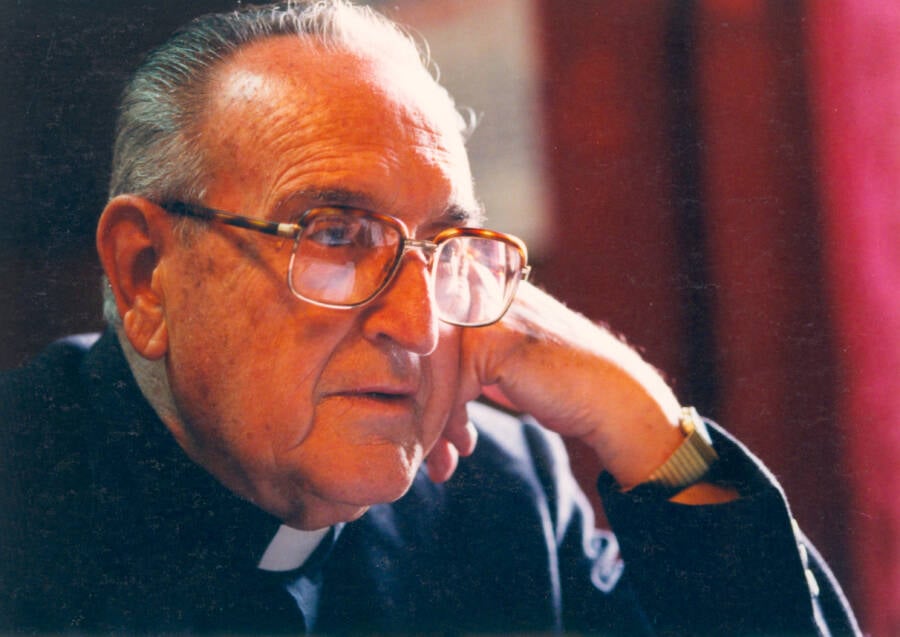 In his 2007 book The Art Of Political Murder: Who Killed The Bishop?, mystery novelist Francisco Goldman tried to analyze all the different theories once and for all in search of a concrete conclusion.

Goldman, who is half-Guatemalan and spent seven years investigating Gerardi’s case, was ultimately unable to identify who ordered Bishop Gerardi killed, but the publicity around his book has led to a reexamination of the murder and is being adapted into a documentary of the same name, produced by activist-actor George Clooney for HBO in 2020.

“The twists and turns of the investigation unfold in front of us like a powerful detective story and we are propelled into a dark world full of secrets, lies and murder,” said Sarah Lebutsch, a producer who will be bringing the documentary to the Cannes Film Festival.

“In today’s world of media cover-ups and government irresponsibility, this will be a must-watch film.”

Moreover, perhaps new evidence will come to light and Guatemala’s decades-old wound could come a little closer to healing.

Now that you’ve learned about Guatemalan Bishop Juan Gerardi’s horrific assassination, read about the so-called Banana Wars and how the U.S. plundered Central America on behalf of corporations. Then, read up on the assassination of Malcolm X and see devastating photos from the scene.