Charles Ponzi And The Incredible Story Behind His Notorious Scheme

In 1903, Charles Ponzi was a poor Italian immigrant with two dollars to his name — then he invented the Ponzi scheme and became a multimillionaire almost overnight.

In 1920, Charles Ponzi swindled Bostonians out of $15 million in just eight months. His get-rich-quick scheme promised a 50 percent return on investment in just 45 days. But the scam fell apart in spectacular fashion, landing Ponzi in jail and his name in the annals of criminal history.

This wasn’t even Charles Ponzi’s first brush with the law, but it was the one that made his name infamous.

Who Was Charles Ponzi? 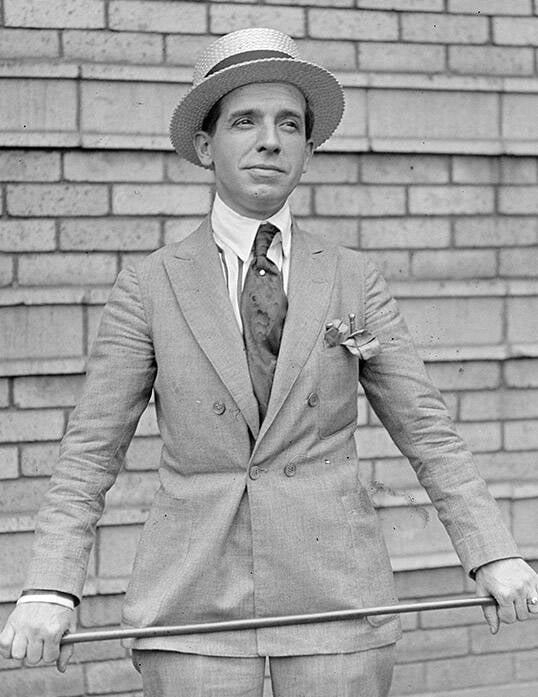 Born in Parma, Italy, in 1883, Charles Ponzi’s early days are somewhat unknown. He claimed to have attended the University of Rome La Sapienza but never graduated.

“In my college days, I was what you would call here a spendthrift,” Ponzi told the New York Times. “That is, I had arrived at the precarious period in a young man’s life when spending money seemed the most attractive thing on earth.”

After running out of money, Ponzi immigrated to America in 1903. On his trans-Atlantic voyage aboard the S.S. Vancouver, Ponzi gambled away most of his money.

In the land of opportunity, he would go on to become a fruit peddler, a dishwasher, a waiter, and a schemer the likes of which the Eastern seaboard had yet seen.

But Ponzi’s million-dollar dreams had to wait. After bussing tables in New York City and painting signs in Florida, Ponzi headed for Montreal where he worked in a bank. 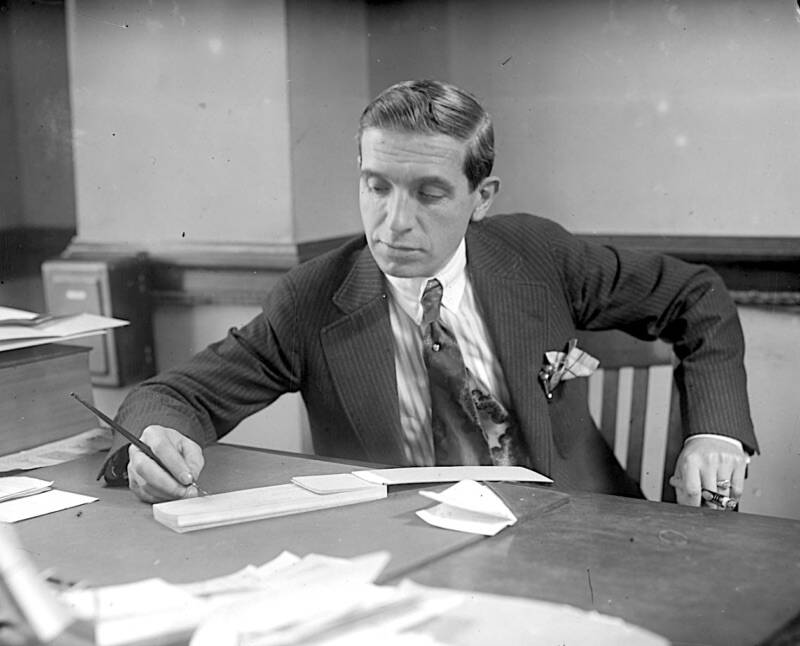 While working as a teller at Montreal’s Bank Zarossi for Italian immigrants, the bank, which turned a profit by charging high-interest rates to its customers, was pushed into bankruptcy.

Ponzi was once again penniless.

The First Schemes Of Charles Ponzi

Ponzi wasn’t much of an early criminal. In 1907, Canadian police caught him forging a check and he spent the next three years in a Quebec prison. Ever the charismatic manipulator, Ponzi managed to hide his sentence from his mother by convincing her that he was merely working at the prison.

After his release, Ponzi tried his hand at another scheme. This time, he smuggled five Italian immigrants across the U.S. border. But once again, police caught him and sentenced him to two years in an Atlanta prison.

By 1919, Ponzi had a new idea: he would start an international trade journal and sell advertisements. But when Ponzi applied for a business loan, the bank’s president personally rejected his application. 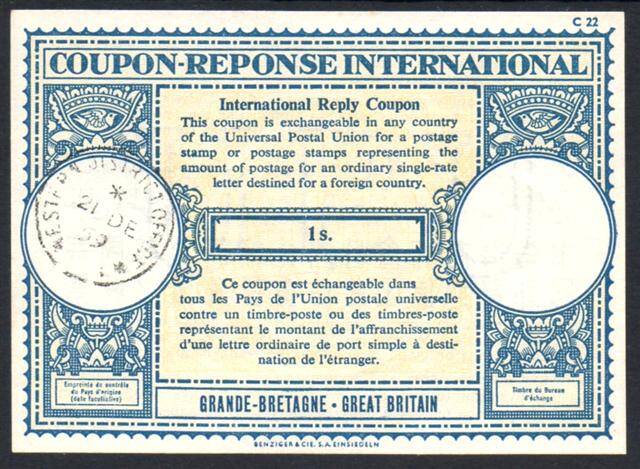 Then, in August of that same year, inspiration struck while Ponzi was opening a letter from a Spanish business correspondent.

Inside, he found an international postal reply coupon. The coupon was issued by a Spanish post office and could be redeemed for a U.S. postage stamp. Because of a change in Spanish currency, the U.S. stamp was worth 10 percent more than Ponzi’s colleague had paid for it.

Ponzi decided to exploit the system. He would buy up massive quantities of stamp coupons in countries with weak economies and redeem them in countries with strong economies. Because international treaties determined the redemption rate, Ponzi’s plan didn’t seem to violate any laws.

Naming his scheme the Securities Exchange Company, Ponzi decided to bring on investors. But first, he trained a squad of sales agents who pitched the scheme to potential investors. These salesmen pulled in a 10 percent commission for every investor they brought in and hired “subagents” to pull in yet more investors for a five percent commission. 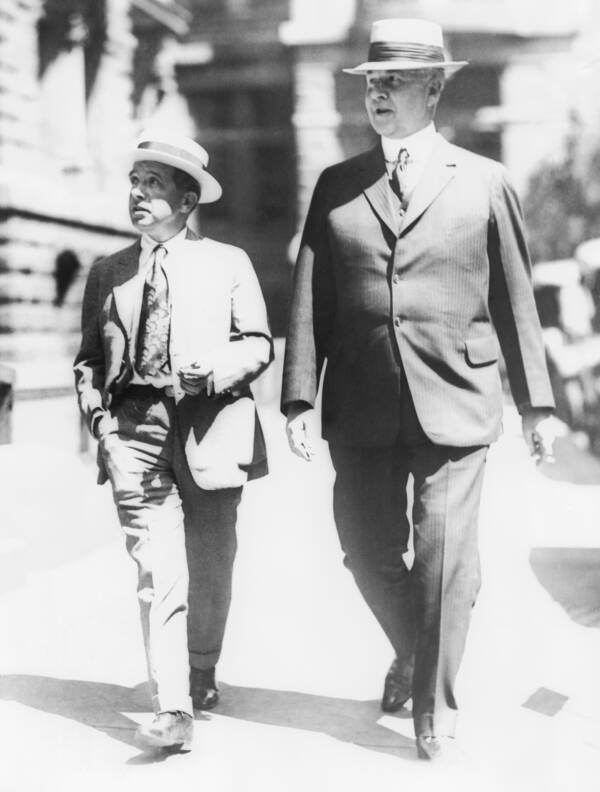 Getty ImagesCharles Ponzi (left), while a big-time schemer, was a small man at just five feet and two inches.

Ponzi’s scheme rested on the faulty premise that instead of asking his sales agents or investors to ship stamps, he simply took their money to pay off prior investors. Many investors simply reinvested their profits in Ponzi’s scheme, too.

It wasn’t long before the schemer garnered 15 customers to invest a total of $870 and within six months persuaded some 20,000 investors to give him about $10 million. He opened offices in New Jersey and Maine.

By eventually bringing in over 40,000 investors, Ponzi made himself a millionaire in less than half a year. 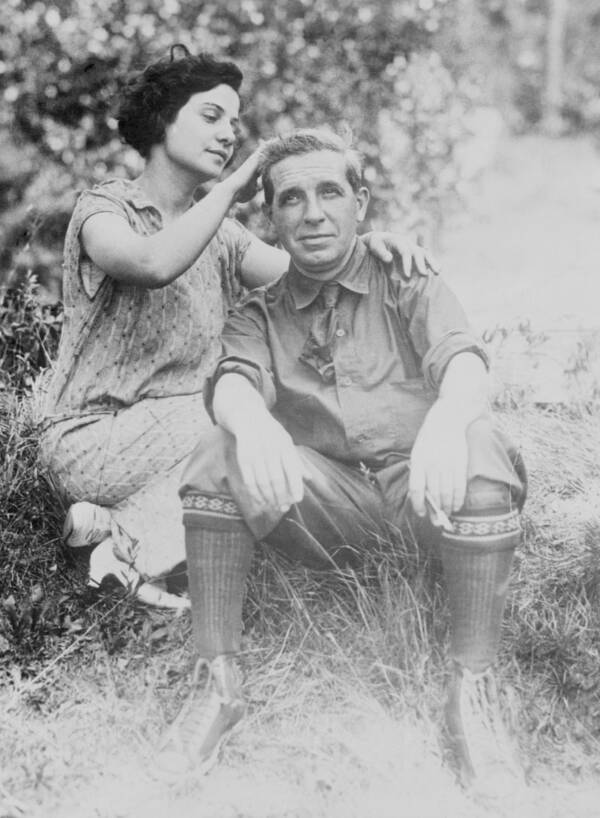 On July 24, 1920, the Boston Post ran a front-page story about Charles Ponzi. The headline declared: “DOUBLES THE MONEY WITHIN THREE MONTHS; 50 Per Cent Interest Paid in 45 Days by Ponzi — Has Thousands of Investors.”

In the article, Ponzi portrayed himself as a generous, wealthy man. “I get no pleasure out of spending money on myself, but a great deal in doing some good with it,” he told the Post reporter. After earning his first million, Ponzi explained, “I will spend all over and above the one million trying to do good in the world.”

The article listed Ponzi’s estimated wealth at over $8.5 million.

Two days later, a line of investors appeared outside Ponzi’s office. “Hope and greed could be read in everybody’s countenance,” Ponzi later wrote in his autobiography. “Madness, money madness, the worst kind of madness, was reflected in everybody’s eyes!”

Ponzi described himself as “The ‘wizard’ who could turn a pauper into a millionaire overnight!” and he had the goods to show for it. He owned a 12-room mansion, hired help, had a couple cars including a custom limo, and gold-handled canes. His wife, a pretty, young woman named Rose Gnecco, wore diamonds and jewels.

“The more I bought, the more I wanted to buy. It was a mania.”

Though many were skeptical, even other scammers couldn’t figure out immediately what exactly Ponzi’s scheme was.

William Miller, who stole over a million dollars from investors in 1899, was baffled by Ponzi. Days before the Boston Post reported on Ponzi’s scheme in a 1920 article, Miller told the publication, “I may be rather dense, but I cannot understand how Ponzi made so much money in so short a time.”

Federal investigators audited Ponzi’s books, suspicious that his scheme violated the law. In his defense, Ponzi said, “My secret is how to cash the coupons. I do not tell it to anyone. Let the United States find it out if it can.”

Taken Down By His Own Publicist 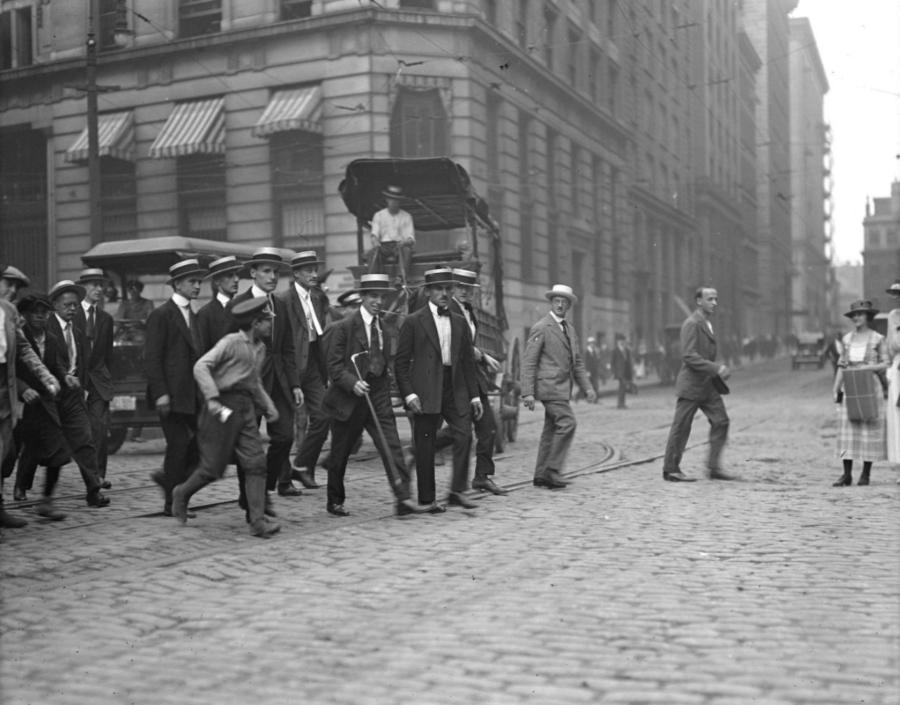 Leslie Jones/Boston Public LibraryCharles Ponzi heads to court in 1920 to defend himself.

As the feds continued to investigate Ponzi, his own publicist turned against him. Ponzi had hired William McMasters to promote the Securities Exchange Company, but instead, McMasters uncovered Ponzi’s fraud.

After examining Ponzi’s financial records, McMasters discovered, “the only money he had in his hands as of right now was money taken from investors. The huge profits that he discussed so glibly were mythical and nonexistent.”

McMasters went to the Boston Post to expose Ponzi’s fraud. On Aug. 2, 1920, the Post ran the article McMasters called “the exposé of [Ponzi’s] fantastic story.”

That same month, federal regulators raided Ponzi’s office. Unsurprisingly, they didn’t find the massive number of stamp coupons required to pay off investors legally. Instead, they found evidence of mail fraud. Because Ponzi mailed investment updates to his investors, the government could charge him with 86 counts of mail fraud.

Ponzi didn’t see his investors as victims. “Even if they never got anything for it,” Ponzi declared after his conviction, “it was cheap at that price. Without malice aforethought, I had given them the best show that was ever staged in their territory since the landing of the Pilgrims!…It was easily worth fifteen million bucks to watch me put the thing over!”

The scammer served three and a half years in federal prison for history’s first Ponzi scheme. After he was paroled in 1925, he was sentenced to nine years in state prison on further fraud charges. While out on bail for this charge, Ponzi escaped to sell Florida swampland under a false name.

He would jump bail once more, fleeing to Texas and signing aboard as a seaman on an Italian freighter before being picked up by authorities in New Orleans. When he finally left jail in 1934, he was deported to Italy. 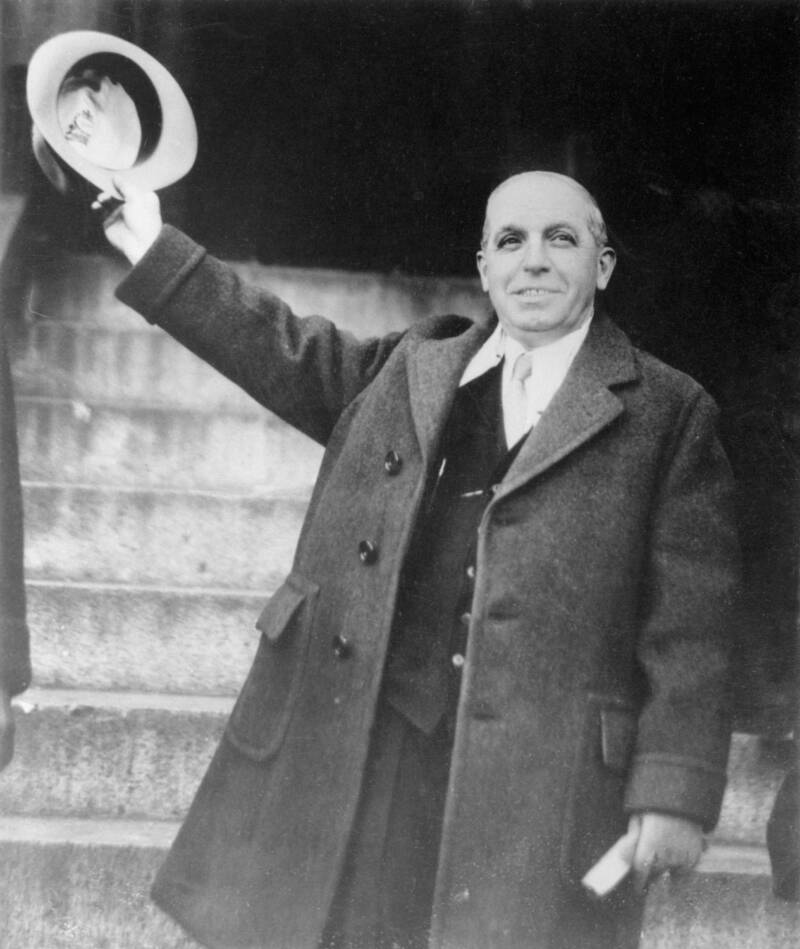 Getty ImagesCharles Ponzi waves his hat as he leaves a prison in Charleston, South Carolina.

At 42, balding and overweight and without work in his home country, Ponzi found himself spiraling. His wife left him and after a stroke in early 1948, died in a Rio de Janeiro charity hospital with $75 to his name.

Charles Ponzi’s name has since become synonymous with fraud. Later Ponzi schemes, like the 2008 Bernie Madoff investment scandal, cost investors billions. While Madoff later expressed remorse for his schemes, Ponzi seemed unmoved. He ended his life as he had begun it, a pauper, with a brief moment of luxury having been enough for him.

Charles Ponzi wasn’t the only 1920s criminal who remains notorious today. Learn about the most famous gangsters of the 1920s and then read about the McDonalds Monopoly scheme that stole $24 million from the fast food franchise.