The Tragic Story Of Blake Fielder-Civil, Amy Winehouse’s Troubled Ex Who Introduced Her To Drugs

Though they were only married for two years, Amy Winehouse and Blake Fielder-Civil had a turbulent six-year relationship that ultimately put Winehouse on the path to her total self-destruction. 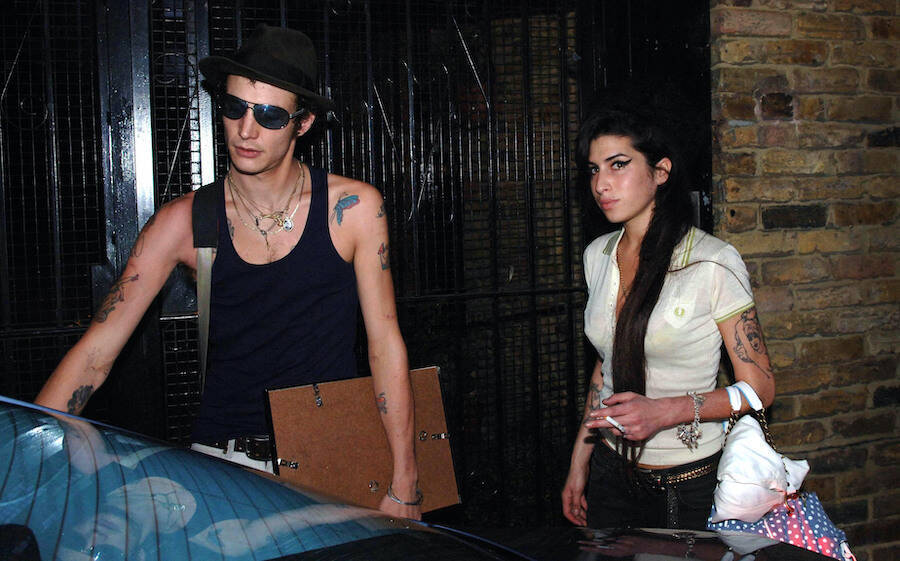 Joel Ryan/PA Images/Getty ImagesBlake Fielder-Civil, Amy Winehouse’s boyfriend and eventual husband, was in prison when the singer died at age 27.

With an unassailable voice and the temperament of a firecracker, Amy Winehouse became a modern music icon. While she shook up the homogenized landscape of mainstream pop, her success was tragically short-lived. And when she died of alcohol poisoning in 2011, everybody wanted to hear from her ex-husband, Blake Fielder-Civil.

Fielder-Civil was a charming young production assistant when he first met Winehouse at a pub in 2005. She had released her debut album two years earlier, and her tumultuous relationship with Fielder-Civil reportedly inspired her follow-up album, Back to Black within a year. It made her an international superstar.

She had reportedly relied on alcohol and marijuana to self-medicate her anxiety, but now regularly used heroin and crack cocaine with Fielder-Civil — who became a staple in Britain’s tabloids.

When they married in 2007, their shared addictions spawned an increasingly dangerous codependence that led to highly-publicized arrests, assaults, and infidelities. While Fielder-Civil ultimately divorced her in 2009, he still shouldered the blame for Amy Winehouse’s death two years later.

The Early Life Of Blake Fielder-Civil

Blake Fielder-Civil was born on April 16, 1982, in Northamptonshire, England. His childhood wasn’t easy, as his parents, Lance Fielder and Georgette Civil, divorced before he could walk. His mother later remarried but Fielder-Civil reportedly had a strained relationship with his stepfather and two stepbrothers. 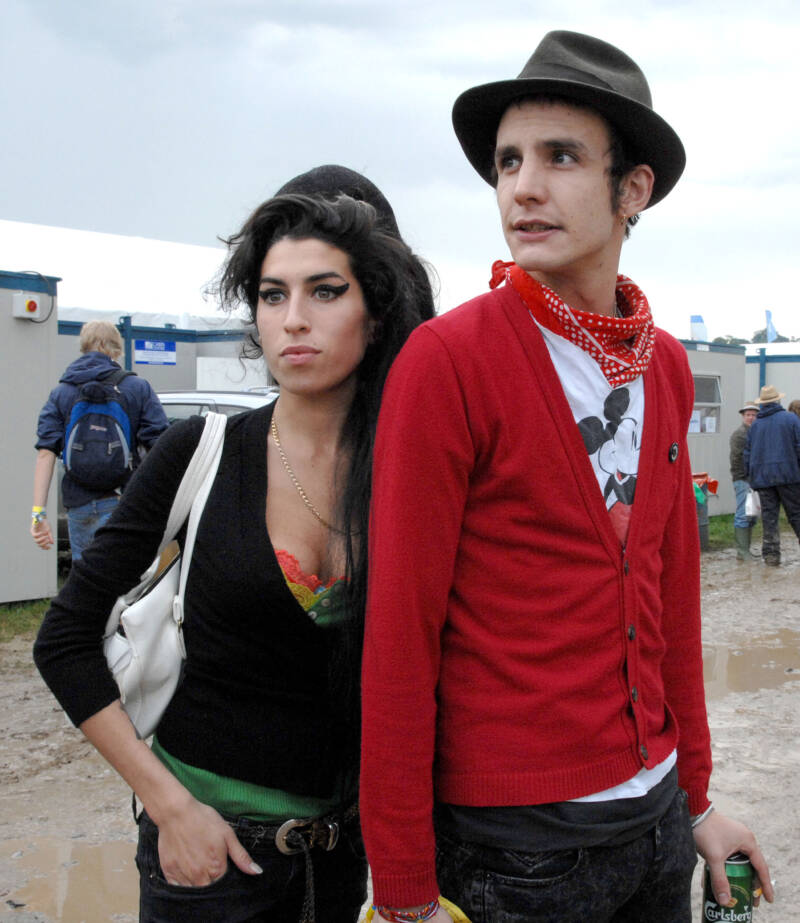 While he reportedly had a prodigious knack for English, Fielder-Civil grew severely depressed and started self-harming as a teenager. He also began experimenting with drugs before dropping out of school at 17 years of age. He moved to London in 2001.

Amy Winehouse, meanwhile, was on the road to stardom. Born on Sept. 14, 1983, in Gordon Hill, Enfield, she came from a long line of professional jazz musicians and attended a theater school before exclusively focusing on music. With a promising demo tape under her belt, she signed her first record deal in 2002.

Winehouse released her debut album Frank the following year. That’s about the time when she met Fielder-Civil at a Camden bar in London in 2005. They immediately fell in love.

But Winehouse’s manager Nick Godwyn noted an ominous shift in her. “Amy changed overnight after she met Blake … Her personality became more distant. And it seemed to me like that was down to the drugs. When I met her she smoked weed but she thought the people who took class-A drugs were stupid. She used to laugh at them.”

Her flat in Camden became a hub for musicians and drug dealers alike. Winehouse herself became world-famous with her 2006 follow-up album Back in Black. When she married Fielder-Civil on May 18, 2007, in Miami Beach, Florida, their mutually destructive relationship spiraled into drug abuse, arrests — and later, death.

The Marriage Of Blake Fielder-Civil And Amy Winehouse

In 2006, Winehouse’s first-ever altercation hit the tabloids. The singer had assaulted a female fan at the Glastonbury Music Festival for criticizing her fiancé. 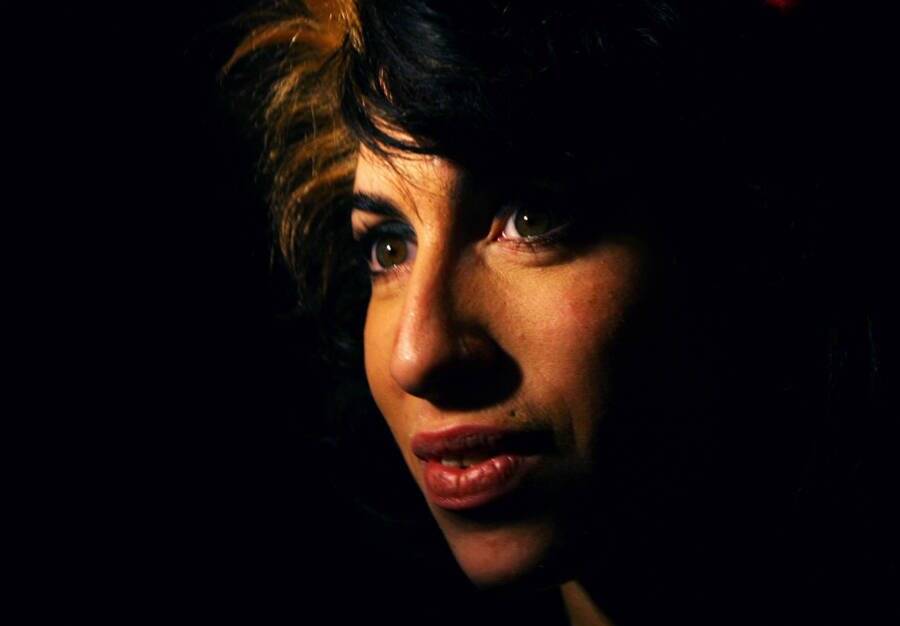 “So I punched her right in the face which she wasn’t expecting, because girls don’t do that,” she said. “When I’ve been on the booze recently, it’s turned me into a really nasty drunk. I’m either really a good drunk or I’m an out-and-out shit, horrible, violent, abusive, emotional drunk. If [Blake] says one thing I don’t like, then I’ll chin him.”

Amy Winehouse’s husband had a comparable temperament and assaulted bartender James King in June 2007. Blake Fielder-Civil would later be caught trying to bribe King out of testifying with $260,000. Meanwhile, he and Winehouse were arrested for marijuana possession in Bergen, Norway, in October 2007 and released after paying a fine the next day.

On Nov. 8, however, Amy Winehouse’s husband was arrested for assaulting King, who had not only provided footage of his assault but testified to the bribe. Winehouse was arrested in December under suspicions of financing it but was never charged. Her husband, however, was sentenced to 27 months on July 21, 2008.

With Fielder-Civil in jail, Winehouse reached the apex of her fame and addiction. On April 26, 2008, she was arrested for slapping a 38-year-old man who tried to hail her a cab. In May, she was caught smoking crack. Fielder-Civil said his influence was exaggerated but that his father-in-law Mitch Winehouse wanted him out.

“Out of maybe a six- or seven-year relationship that me and Amy had on and off, there was drug use for about four months together…” he said. “Then I went to jail. Then it got a lot worse while I was in jail and then when I came out of jail I was told [by Mitch Winehouse] that if I loved her I’d divorce her and set her free and I did.”

Where Is Amy Winehouse’s Boyfriend Now?

Blake Fielder-Civil said that he and Winehouse only got divorced in 2009 in order to satisfy her father and silence the tabloids. While they planned to eventually remarry, they never got the chance. Fielder-Civil was in prison again when he heard of Winehouse’s death on July 23, 2011.

“So I made them show me about six or seven websites and each time they showed me the computer, I’m finding it harder and harder to say no, you know,” he recalled. “I broke down and couldn’t stop crying — and then I had to get put back in my cell.”

Blake Fielder-Civil continued using drugs in the wake of Amy Winehouse’s death following his release from prison and even overdosed in 2012. He’s reportedly remained clean since and married a woman named Sarah Aspin.

“When it comes to Blake, I’ve decided never to speak badly about anyone,” said Janis Winehouse, the singer’s mother. “I know it was about love and I don’t think you can judge when it comes to love. Love does the walking and talking. I believe the relationship between Amy and Blake was intimate and genuine.”

“Their marriage was impulsive but it was still pure. It was obviously a complicated relationship but love was at the heart of it.”

After learning about Amy Winehouse’s husband Blake Fielder-Civil, read about Buddy Holly’s death. Then, learn about the sudden death of Janis Joplin.