Since its discovery, scientists have been puzzled by the red liquid seeping from Antarctica's Blood Falls. A new study provides an explanation. 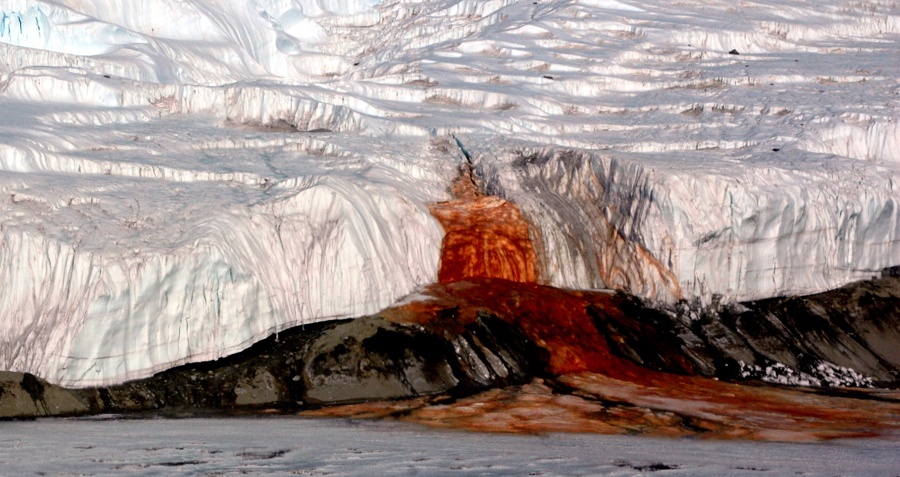 Since its discovery more than a century ago, scientists have been puzzled by the deep red liquid seeping out of Antarctica’s Blood Falls. A new study, however, finally provides an explanation.

Following Australian geologist Griffith Taylor’s discovery the falls in 1911, most adopted his theory that the strange red liquid was water tainted with red algae. Ultimately, in 2003, many accepted the theory that the red color was the result of oxidized iron in the water.

Now, a new study published in the Journal of Glaciology fleshes out and supports the oxidized iron explanation.

The researchers confirmed that there is in fact water containing oxidized iron flowing through Blood Falls, water that originates from a strange million-year-old lake beneath the ice.

Using echolocation technology, researchers were able to locate the lake in question.

“We moved the antennae around the glacier in grid-like patterns so that we could ‘see’ what was underneath us inside the ice, kind of like a bat uses echolocation to ‘see’ things around it,” study co-author Christina Carr told The New York Post.

What’s more, the lake has remained liquid despite long being encased in ice. This is the result of a perpetual hydraulic system in which the freezing process of the water releases enough heat energy to melt the surrounding ice and create more water that will then freeze and on and on ad infinitum.

Thus the “blood” may continue to flow from Blood Falls for many more years to come.

For more sites like Blood Falls, check out some of Earth’s other astonishingly bizarre and surreal landscapes. Then, have a look at 25 unbelievable-yet-true Antarctica facts.