For those in charge, the act passed to keep more Chinese people from emigrating to the United States wasn’t enough. Fear of the Chinese population taking white middle class jobs caused those who had made it to the USA to be relegated to laundries and restaurants. For men not interested in either of those professions, there weren’t many other options besides gang life.

In the early 1900s, two major factions were battling for control of vice in Chinatown: the Hip Sing Tong (along with their allies the Four Brothers) and the On Leong Tong. These gangs ran everything from the opium dens to the entertainment centers to the prostitution rings, largely without threat from law enforcement, allowing the gangs to leave unchecked violence in their wake.

But inside Doyers Street’s Chinese Theater, there was usually peace, as members of the rival gangs sat calmly on opposite sides of the theater and avoided conversation as adamantly as Republicans and Democrats listening to a State of the Union address.

On the night of August 7, 1905, members of both gangs packed into the Chinese Theater to watch a play entitled The King’s Daughter. As one New York newspaper, The Sun, estimated, “There were probably 500 Chinamen in the house and they came from most of the laundries in Manhattan, The Bronx and Jersey City.” 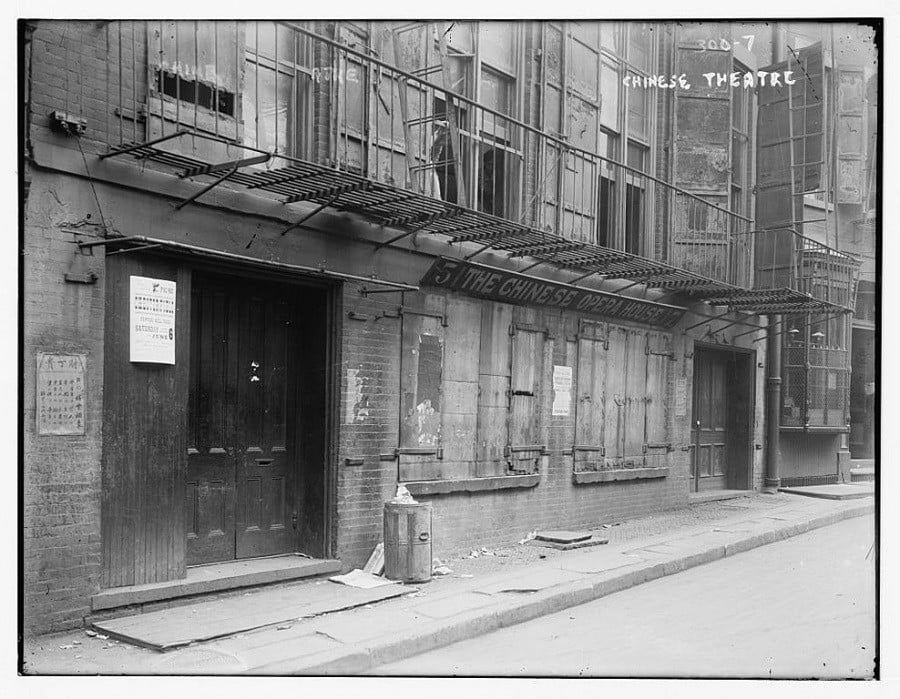 The Chinese Theater, sometime between 1893 and 1911. Image Source: Wikimedia Commons

Suddenly, a Hip Sing gangster lit a string of firecrackers and threw them onto the stage. This drew the attention of the unsuspecting audience, and allowed 10 other Hip Sing members who were in on the plan to pull pistols out of their pockets and sleeves, and spray bullets toward four off-guard On Leong Tong members.

“Four men went down at the first volley and lay on the floor of the theater, trampled on by the yellow men that were doing their best to get out of the house,” The Sun’s account reads. “The assassins kept on firing, and the only wonder is that a dozen weren’t ready for the hospital when they quit.”

Sailors, marines, policemen, and rubberneckers rushed to the Chinese Theater to get a glimpse of the aftermath, witnessing crime in real life being the reality TV of the early 1900s, the “true crime” craze of recent years magnified tenfold.

The killers likely slipped away using one of the many underground tunnels that branched out from Doyers Street. No one involved in the massacre was ever charged for the crimes.

But the massacre did have one long-lasting effect: it kicked off a years-long Tong war all centered around the very spot it had begun — the bend on Doyers Street.