Cachoeira Queima-Pé in Brazil supplies fresh water to the nearby city of Tangará da Serra, which has faced severe droughts for the past few years. 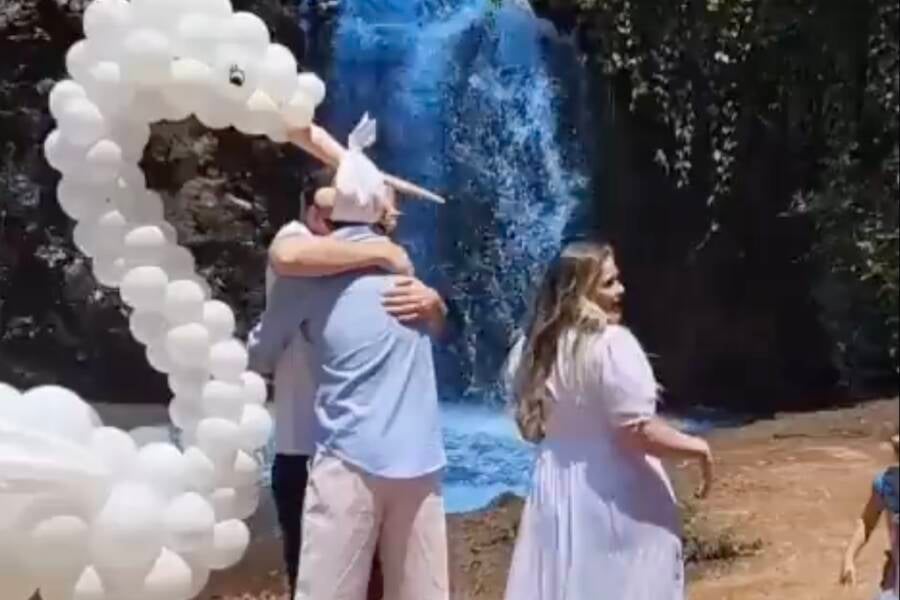 Extravagant (and disastrous) gender reveal parties have become something of a regular occurrence in the age of social media, but a recent gender reveal gone wrong in Brazil has led to the couple responsible being investigated for an environmental crime.

As reported by The Washington Post, a celebration in the central Brazilian state of Mato Grosso featured the standard assortment of pink and blue balloons alongside a giant stork and powder cannons that shot colored puffs into the air to announce the baby’s gender.

Blue powder filled the air to announce that the couple is having a boy, but the party hosts took the celebration a step further by dyeing an entire nearby waterfall electric blue.

The 59-foot waterfall is known as Cachoeira Queima-Pé and is located in Tangará da Serra, an area rife with waterfalls and eco-tourism sites.

Unfortunately, the Queima-Pé waterfall happens to feed fresh water directly to Tangará da Serra — a town that has been struggling with severe drought for the past few years.

Per the Independent, the unnamed couple is now being investigated by the Brazilian environmental ministry for polluting the water supply from Cachoeira Queima-Pé.

Videos shared by the couple and party attendees online show the wide array of pink and blue balloons, as well as the bright blue waterfall — but they quickly received backlash.

“What happened to cutting into a cake. Why does nature keep getting damaged because these people think they’re special?” one comment read.

“Because who needs drinking water when you have ‘likes?'” read another.

Brazil’s environmental protection agency, SEMA, released a statement saying that the department will be investigating the couple to determine which products were used to dye the water and assess the severity of the environmental damage caused, if there was any.

“Sema-MT will notify the owners of the area so that they can inform who were responsible and will determine if there was environmental damage, depending on the material released into the water,” the press release said. “A team composed of two servers from Sema-MT and four servers from the Secretary of the Municipality of Tangará da Serra are on site and nearby investigating the complaint.”

According to Gizmodo, a local media outlet reported that the couple claimed no chemical products were used to dye the water, but they could not say more while the investigation is ongoing. 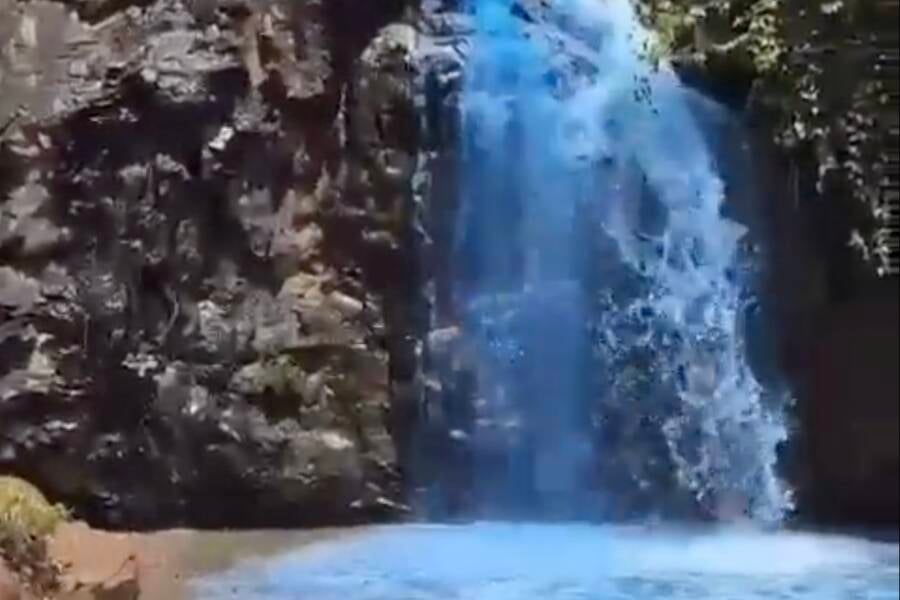 TwitterAllegedly, no chemicals were used to dye the water, but an investigation will reveal what exactly was used.

This incident is one of the latest in an already worn-out and dangerous trend of over-the-top gender reveal parties, almost all of which have been equally criticized by the press and social media users alike.

Just last year, a couple in El Dorado sparked a 22,000-acre wildfire that killed a firefighter during their gender reveal party.

A similar disaster took place back in 2017, when an Arizona couple started wildfires that burned off nearly 35,000 acres of land after the substance they intended to blow up to reveal their child’s gender proved to be a little too explosive.

In each instance, the couples faced massive fines and potential long-term prison sentences.

While the investigation in Mato Grosso is still going on, past situations have shown that it is perhaps better to keep gender reveal parties simple, both for the parents-to-be and the environment.

Gender reveal parties aren’t the only celebrations gone awry. Read about the Florida man whose book-burning sparked wildfires that destroyed two homes. Then, read about the Texas woman who blew up her wedding dress to celebrate her divorce.