Bull Kills Self After Partygoers Set Its Horns Ablaze [VIDEO]

The bull died during the local "Bulls in the Street" festival. 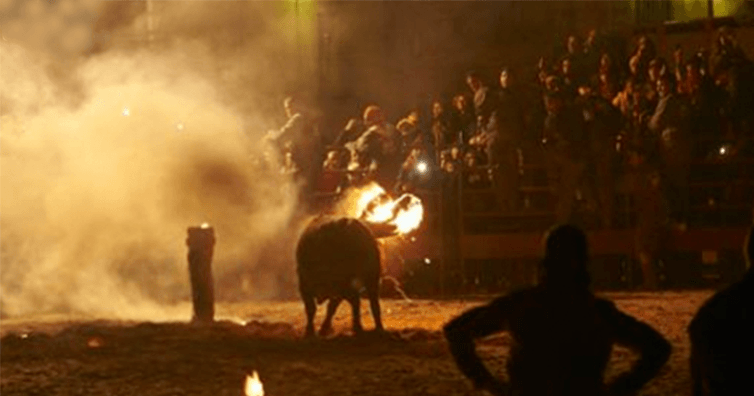 YouTubeA screengrab from the viral video of the bull’s tragic demise.

During the “Bulls in the Street” festival, a modernized version of the famous Running of the Bulls festival in Spain, a bull’s horns were set ablaze, causing the frightened creature to run right into a pole. Though Spain is known for its bullfighting, this instance of a bull killing itself has horrified even those accustomed to the violence of a bullfight.

In a now-viral video, shared by Spanish animal rights organization Bulls Defenders United, a crowd tied the bull to a post in the middle of a small town square and set its horns on fire. The crowd then released the bull from the post at which point the panicked animal ran head-first into the post hard enough to kill himself.

Frightened by revelers and the fire, the bull ran head first into a wooden pole and died instantly.

The Independent reports that the event took place in the town of Foios, Valencia. The shocked reactions of the surrounding revelers further suggest that the bull’s untimely death was certainly unintended, even though the bull had allegedly gored a man’s leg earlier that day.

Bullfighting has been a contentious topic in Spain for years. Proponents, many of whom work in high levels of government, assert that the event is part of the country’s cultural heritage and thus must be respected and perpetuated.

These voices are a minority, albeit a vocal one. Only 19 percent of Spanish adults support bullfighting and in recent years many Spanish towns and regions have attempted to ban the practice altogether.

In case after case, however, the national government has blocked each attempt. In 2016, the country’s highest court struck down a law passed by the large autonomous region of Catalunya, which would ban bullfighting. This is largely because, in 2013, the Spanish Congress granted bullfighting a cultural heritage status, affording it legal protections and prohibits any regions in Spain from banning the practice locally. 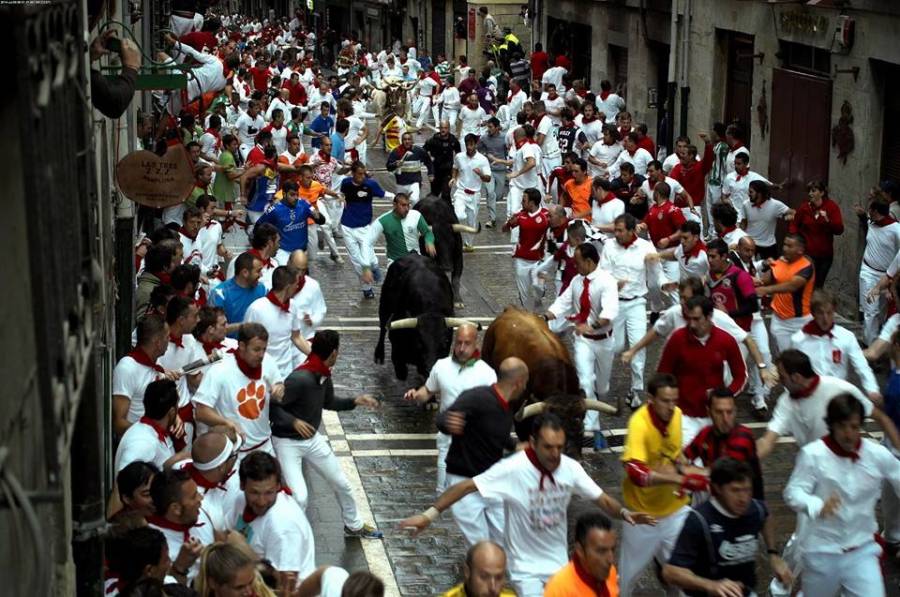 Wikimedia CommonsThose who participate in the Pamplona bull run wear bright hues to attract the attention of the bulls.

“This move is a cynical attempt by a desperate bullfighting industry to secure the future of this dying industry,” organizations such as PETA, Humane Society International, and the World Society for the Protection of Animals, wrote. “Bullfighting is cruel and outdated and has no place in a modern society; culture stops where cruelty starts.”

The Humane Society reports that some 250,000 bulls are killed in bullfighting spectacles yearly and as such, many have made motions even more recently towards banning the practice. Pamplona’s mayor, Joseba Asiron, proposed this year that the “running of the bulls” tradition remain intact but that the bullfights staged each evening cease.

Further, many object to children being exposed to the overt violence of bullfighting and this past year a UN Committee for children’s rights called on Spain to ban bullfighting attendance on ages 18 and younger.

It seems local Spaniards continue to grow disillusioned with the practice despite its cultural roots. Indeed, the practice is unattractive to tourists whose dwindling attendance has hurt the bullfighting industry. While disturbing, this bull’s tragic demise has at least drawn sufficient attention to an ethical issue that is dividing a country.

Perhaps bullfights will soon be a thing of the past.

Next up, check out the time Whole Foods filed a restraining order against a vegan activist group. Then, read about how an Indian court granted all animals the same legal rights as humans.