Meet The Camel Spider, The Terrifying Predator Of The World’s Deserts

Also known as the sun spider or the wind scorpion, the camel spider is a desert-dwelling arachnid known for its enormous size and painful bite. 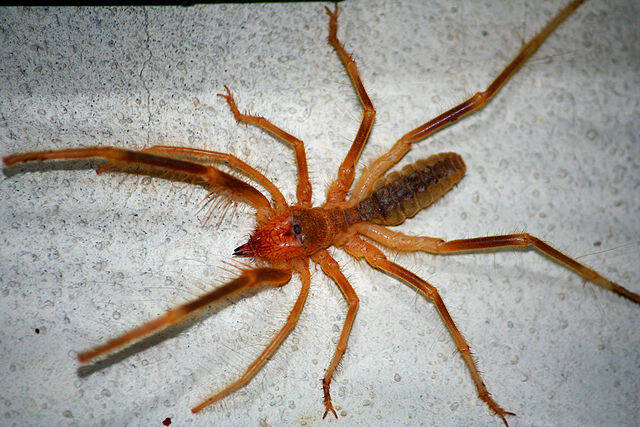 Wikimedia CommonsThe camel spider, or sun spider, can reach lengths of up to six inches — though urban legends have greatly exaggerated their size.

The camel spider is everything that arachnophobes fear. It’s ugly, huge, and the subject of many a tall tale. The myths surrounding this creature were popularized in 2003, at the height of the Iraq war, when American soldiers began spotting its spindly body in the unforgiving Middle Eastern desert.

Prior to terrorizing the troops, though, the critter was the subject of many a fable told by the Persians who first laid eyes on it. But despite its fearsome appearance, the camel spider (which actually isn’t really a spider) is harmless to humans. What’s more, it only lives for one year in the wild — and spends most of its time in hiding from the blistering sun.

The camel spider actually belongs to the class Arachnida and is correctly known as the solifugae. And despite its catch-all name, the solifugae is actually comprised of more than 1,000 species in more than 150 described genera.

Though frequently confused for both scorpions and spiders, they’re technically not either one. They’re cousins with pseudoscorpions and mites, according to Smithsonian Magazine,

According to National Geographic, the Persians would often tell tales of this fearsome-looking creature standing impossibly tall, running through the desert like a whirlwind, and feasting on the corpses of humans and camels that dared to cross its path. While invariably cool-sounding, it’s actually not true. Camel spiders don’t feast on humans, camels, or any other large mammal.

Instead, the solifugae — which is sometimes also known as the wind scorpion or the sun spider — only stands about six inches in length at full maturity. And despite further tales of its “fast and furious” speed, its top speed is 10 miles per hour — just slightly faster than the average human.

The Camel Spider Has A Voracious Appetite 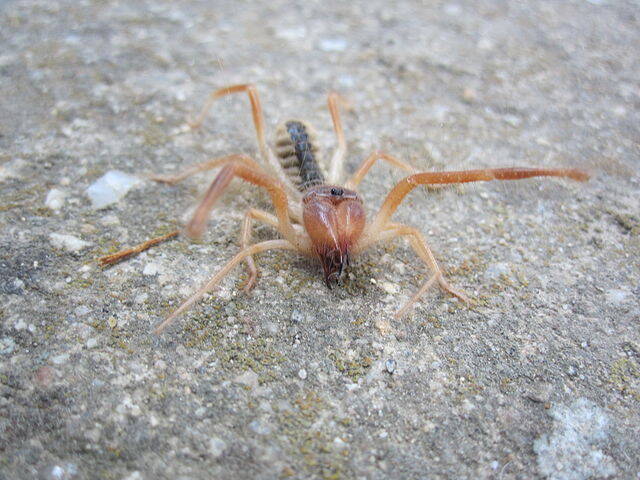 Wikimedia CommonsCamel spiders will sometimes gorge themselves on their prey to the point that they become too big to move.

While the camel spider is harmless to humans, bugs don’t stand a chance against it. A review of the solifugae diet by the Denver Museum of Nature and Science reveals that it loves to feast on wasps, termites, beetles, and silverfish.

And it’s not just critters that solifugae love to feast on: it also loves other insects, small birds, and even small snakes. If given a chance, it will gorge itself — often becoming so big that it will be unable to move, especially if it eats too fast. As a general rule, though, the wind scorpion won’t eat prey that’s bigger than itself.

That said, though, it’s far from a timid creature. Despite claims that it will scream while it’s running toward its prey, it actually moves in relative silence. And it’s actually quite aggressive — especially if it feels cornered or otherwise threatened. Though it has no venom glands, the camel spider does have sharp pincers called chelicerae that will hurt if it makes contact with human skin.

And while the bite won’t require medical attention, it’s always a good idea to clean the bite with alcohol or hydrogen peroxide to avoid infection, in the rare instance that it does bite you. But, as a general rule: if you leave it alone, it will leave you alone.

Urban Legends About The Camel Spider Are Greatly Exaggerated 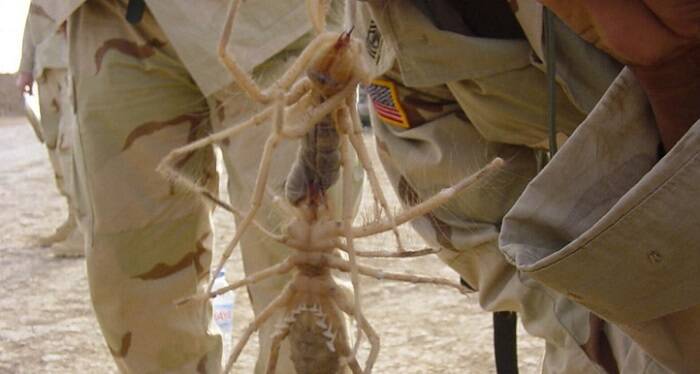 Wikimedia CommonsThe soliders’ experience with camel spiders is real — but the photo shows a distorted perspective.

It seems the origins of the “larger-than-life” camel spider first started getting legs in 2004, when a mass e-mail purporting to show gigantic solifugae threatening the lives of the American soldiers in Iraq began making the rounds. Long before Facebook became a hub of misinformation, spam e-mails featuring the photo above began circulating through gullible people’s inboxes.

“From someone stationed in Baghdad … It’ll give you a better idea of what our troops are dealing with,” read the e-mail that accompanied the photo above. But, according to the sergeant who took the photo, the actual size of the camel spider in the photo above was no more than 4 centimeters (about 1.6 inches), and the creature’s oversized appearance is due to forced perspective.

“Photos that purport to show creatures six times that size have misleading perspective—the spider is invariably placed in the foreground where the lens makes it appear much bigger than its actual size,” reports National Geographic.

The misinformation was so widespread, in fact, that when Rod Crawford, of the Burke Museum, attempted to clear up the camel spider’s bad name, he was met with abusive e-mails accusing him of disrespecting the troops.

“One person offered to have his brother in Iraq send me a 30-cm specimen, but backed down when the brother claimed he couldn’t get an export permit,” he wrote. “No one has ever explained how they measured speed or jumping height, and of course no one has ever produced a specimen found eating human or camel flesh.”

In reality, though, the camel spider is so afraid of humans that if you see one running toward you, it’s not because it wants to devour you alive. It’s because you offer something that they’re desperate for in the extreme heat of the Iraqi desert: a huge shadow.

Now that you’ve read all about the terrifying — but harmless — camel spider, read all about the equally bizarre-looking bunny harvestman spider, which looks like it was made with leftover and mismatched parts. Then, read all about the children who were hospitalized after they forced a black widow spider to bite them — repeatedly — so they could become Spider-man.