How Michael Dowd Became The Most Crooked Cop In The NYPD

Michael Dowd joined the NYPD in 1982 and was assigned to the 75th Precinct in Brooklyn. There, he began working with drug dealers, robbing their rivals, and selling cocaine. 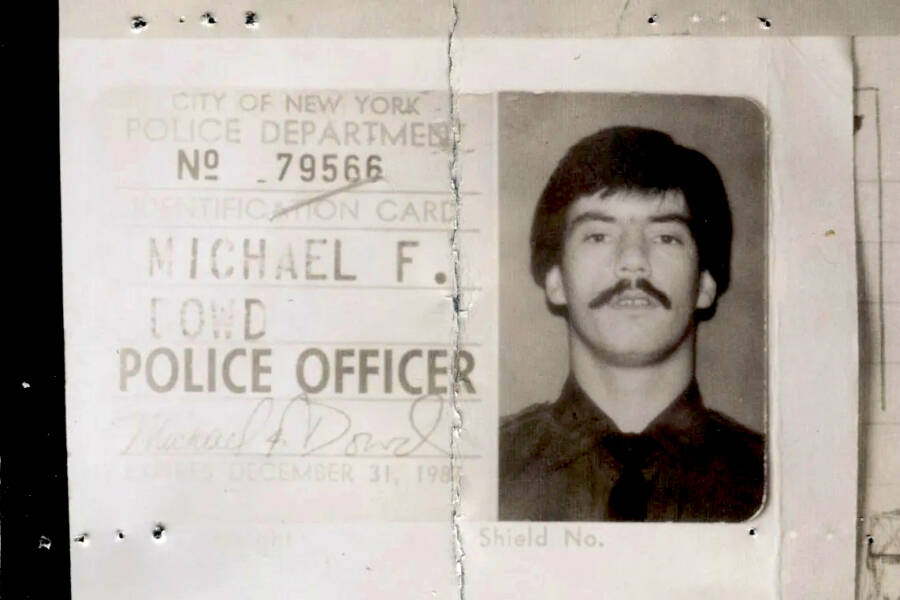 Sundance Selects/YouTubeMichael Dowd joined the 75th Precinct in Brooklyn in 1982.

Michael Dowd joined the New York Police Department in 1982 as crack cocaine began hitting the streets. Assigned to the 75th Precinct in East New York, he oversaw the city’s second-deadliest jurisdiction, with over 100 murders per year.

But soon, Mike Dowd noticed how much money there was in drug dealing — a stark contrast to his $600 per week salary. In the beginning, he merely stole cash from crime scenes. But when his activities went unchecked, he began robbing drug dealers and dealing drugs himself.

By 1986, he’d started working for Adam Diaz — a cocaine trafficker who made $1 million per week. Diaz paid Dowd handsomely to tip him off about incoming raids and shuttle his drugs around the city. Feeling untouchable, Dowd spiraled deeper into New York City’s criminal underbelly, eventually becoming one of the most corrupt cops in the NYPD.

As the documentary The Seven Five depicts, Dowd’s story involved armed robbery, cocaine trafficking, and abductions. Without a shred of oversight, he brought fellow officers into the fold — before his partner finally ratted him out.

Michael Dowd was born on Jan. 10, 1961, in Brooklyn, New York. He was the third of seven children and was raised on Long Island by an Irish American firefighter. Dowd was bright, and his parents encouraged him to become a doctor, but he gravitated towards his father’s vocation in public service.

Dowd took both police and firefighter tests after high school and joined the NYPD because, “The police test came back first,” he recalled. “Simple as that.” 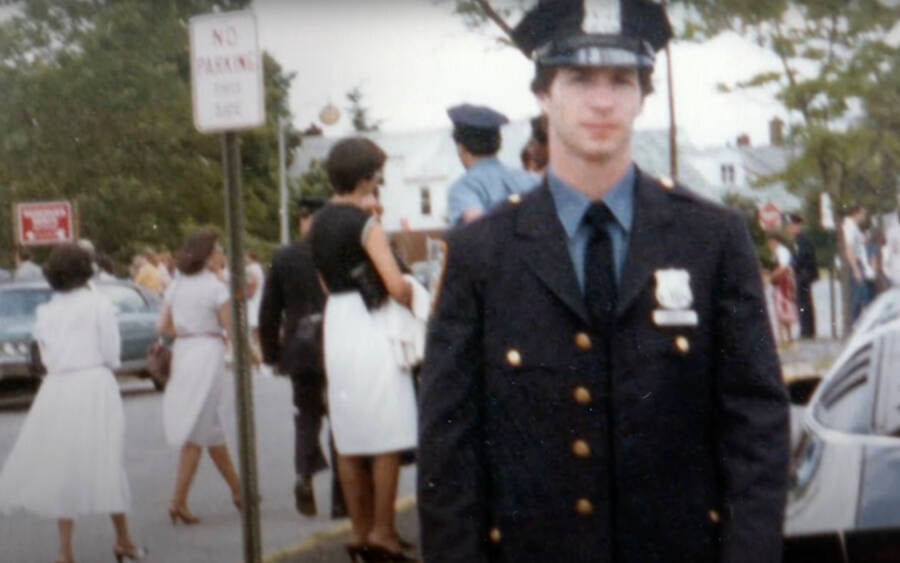 Dowd graduated from the police academy in 1982. He pocketed his first bribe within a year from a man who faced thousands in traffic fines. Dowd told him that he would let him go “if he bought me a nice lobster lunch” and paid $200 cash — a third of his weekly salary.

He ended his shift with a “buzzing feeling” and never looked back.

In 1986, Michael Dowd slid deeper into corruption after 11 officers in the nearby 77th Precinct were arrested on extortion charges. It was a huge scandal. And Dowd believed the NYPD wouldn’t want to risk repeating it by indicting even more of their own. Remarkably, Dowd saw it as a chance to amplify his illegal behaviors.

“There was a lot of anger in me,” recalled Dowd. “These young punks were running around with all kinds of money and I was broke.”

With the crack wars at their peak, Michael Dowd’s supervisors spent little to no time overseeing officers who worked in New York’s poorest neighborhoods. Dowd shook dealers down with abandon, extorting them into protection payments — and he recruited some of his peers into the racket.

“Life was wonderful,” he recalled. “Wonderful, sinful, and glorious. I felt like Scarface, only I was a white Irish boy from Long Island.” 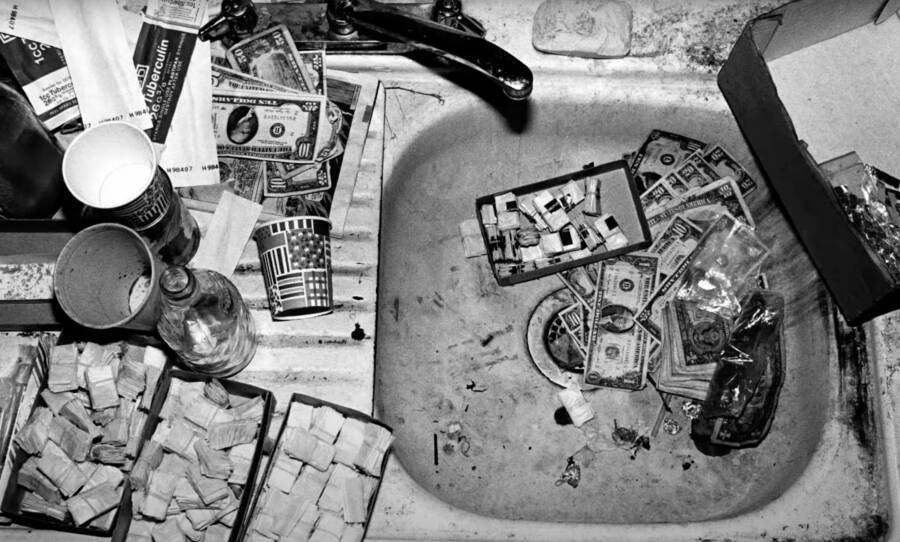 It didn’t take long for Dominican drug dealer Adam Diaz to make him an employee. Diaz used supermarkets in East New York as fronts for his lucrative cocaine operations and wanted an inside man to warn him of outside threats. He bought Dowd out for $24,000 and a weekly $8,000 salary.

In addition to warning Diaz of raids, Dowd and his crew of cops even began robbing competing dealers for Diaz in 1986. When Dowd’s 1987 performance review came in praising his “excellent street knowledge” and “good career potential,” he felt untouchable. And for a while, he was.

Dowd began flaunting his illegal income by driving a red corvette to work and taking limousines to Atlantic City to gamble. He bought three more houses in New York and a condo in Florida.

“I would sell 28 kilos to the biggest dealers in the area and then sell seven kilos myself,” he said. “I was making $68,000 a week until I was caught.”

It was around this time, too, that colleagues warned an officer named Ken Eurell to stay away from Dowd. But Eurell was drawn to Dowd’s mania and became his partner. Together, they protected the daily operations of Diaz’s syndicate.

By the early 1990s, Michael Dowd was making so much money on the side that he sometimes forgot to pick up his actual NYPD paycheck. But he also started drinking heavily, often on the job, and he started using his own supply. And in 1992, his entire life came crashing down.

“My wife kept telling me to stop. But I couldn’t stop,” recalled Dowd.

“I loved the extra money so much and I spent it very openly. I thought about getting caught and then I’d miss it because I was getting away with it for so long right in front of everybody and I thought none of the cops would give me up.” 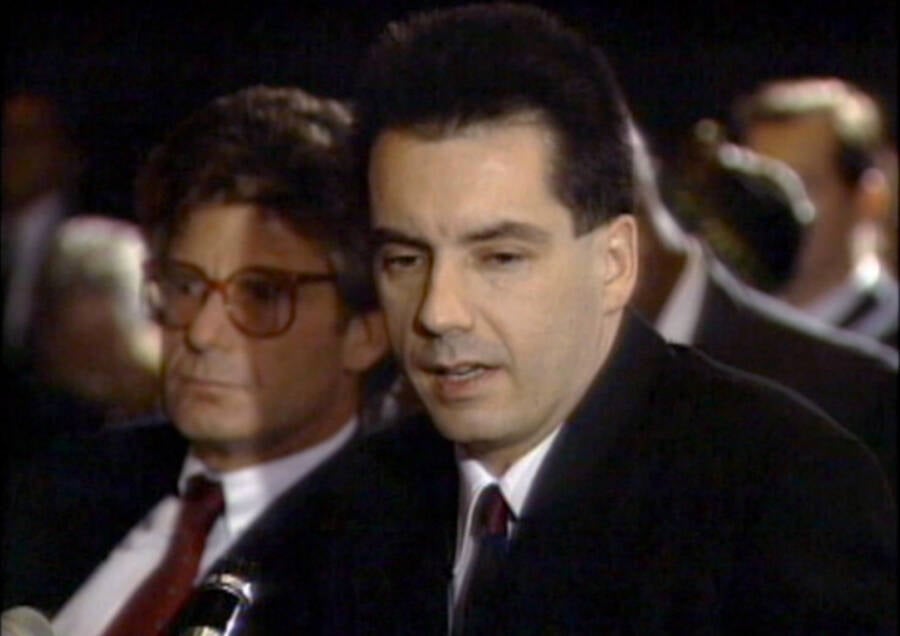 Little did Dowd know that Suffolk County investigators had intercepted phone conversations between him and a local drug dealer. On May 6, 1992, police barged into the drug house Eurell was supervising and cuffed him. Dowd was on shift, high on coke and drunk on vodka, and was arrested on drug conspiracy charges when he returned to the precinct.

It soon became clear that the FBI had been investigating Diaz and recorded Dowd and Eurell talking about drug deals and payments over the phone. The two partners faced federal and state cases that could see them imprisoned for 25 years. After being released on bail, they met to reassess.

Unaware Eurell was wearing a wire in exchange for a lesser sentence, Michael Dowd was recorded plotting the abduction of a Colombian woman who vanished with $200,000 worth of cocaine belonging to a local dealer. Dowd would be paid enough to flee to Nicaragua in return for finding her, but Eurell’s tape put him behind bars.

“In the beginning, of course, I was hurt,” said Dowd. “I felt betrayed. It still hurts when I think about it, but I got over it.”

Michael Dowd was arrested in July 1992. He was indicted with 63 colleagues for murder, conspiracy, and drug-related offenses.

Dowd’s sordid tales shocked the city. And outrage at Internal Affairs erupted once the public learned that the department had ignored 16 complaints about Dowd over the years, ranging from drug-dealing to robbery. In response, the city established the Mollen Commission aimed at restoring oversight.

Dowd testified before the commission in September 1993 and admitted that he had considered himself both a cop and a drug trafficker. In 1994, he was convicted of racketeering and conspiracy to distribute narcotics. He was sentenced to 16 years and served 12 and six months.

Since Michael Dowd’s release from prison, he has advocated against the very corruption that ruined his life. In 2017, Netflix produced a documentary about Dowd’s corruption scandal The Seven Five. And today, Michael Dowd and Adam Diaz operate a fledgling business selling cigars from the Dominican Republic branded after the 75th Precinct.

Ken Eurell, meanwhile, spent not a single day in jail.

After learning about Mike Dowd, read about NYPD whistleblower Frank Serpico who was shot in the face for telling the truth. Then, learn the true story behind the NYPD’s crazy-corrupt 77th Precinct.