Constructed by the United States during the Cold War, Camp Century was built so the Soviets never had any hope of finding it.

Buried underneath the frozen wonderland of Greenland’s vast ice sheet is a remnant of the Cold War. It’s not a plane wreck site or some classified piece of fantastic military hardware, but something far more interesting: Camp Century.

Camp Century, the result of Project Iceworm, was a small, full-fledged city less than 800 miles from the North Pole. Even more impressive, it was powered by a mobile nuclear reactor. The outpost started as a scientific operation around 150 miles inland from Thule Air Base. Eventually, the U.S. military thought it would be an ideal place to expand its operation into something much more sinister than a mere science outpost. 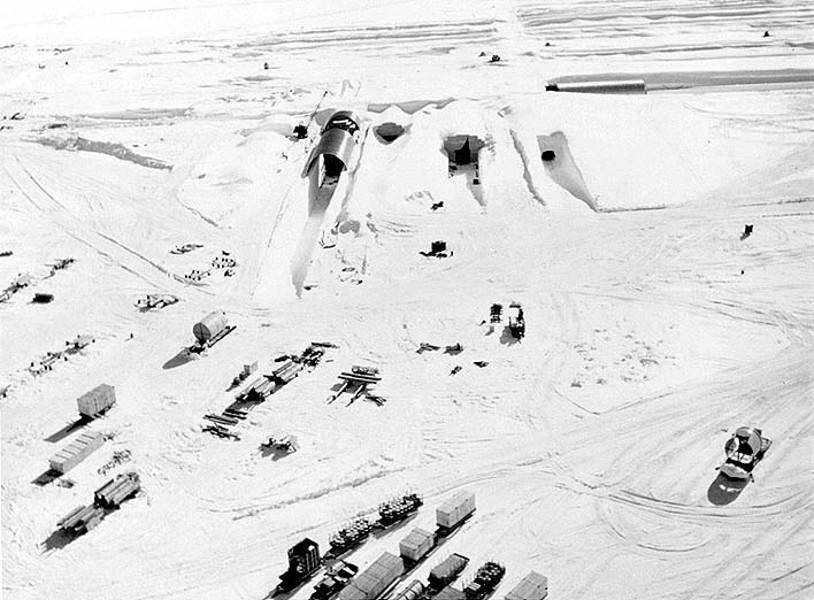 No One Would Dare Go There 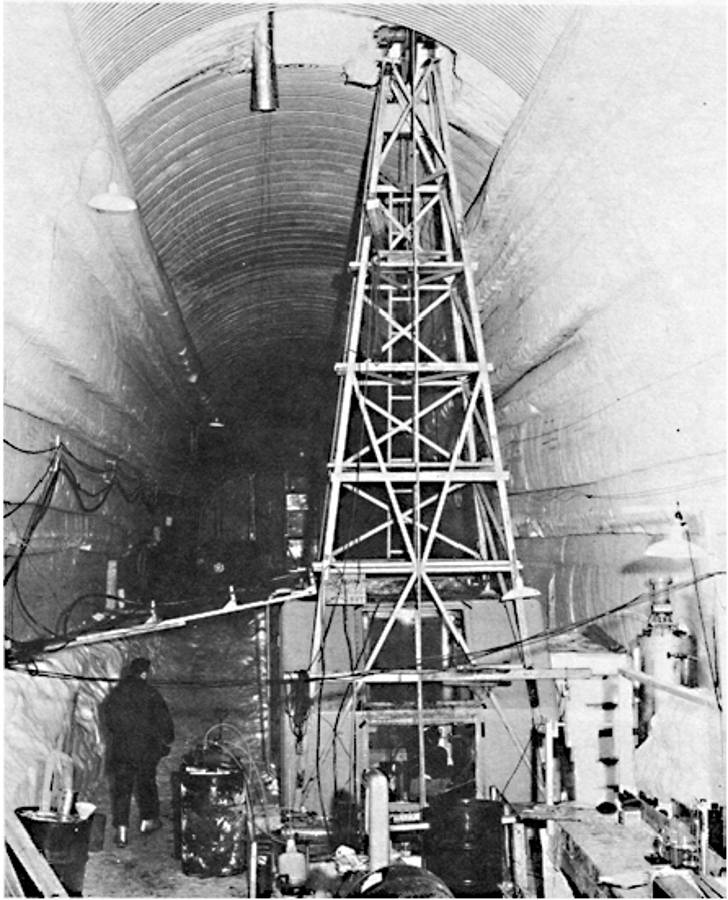 The idea behind a frozen base in a barren wasteland was that no one would think to bomb or invade the area. Even if Soviet planes knew the general location (as shown in this documentary film on the base), the blinding snow conditions would make the installation impossible to see, and because it’s buried beneath the ice, radar from planes would be useless as a detection method.

Think of Camp Century as the ice planet of Hoth in The Empire Strikes Back and you get the idea. No one in the Empire believed a base would exist there, which made it the perfect place to hide rebels.

The U.S. Army Corps of Engineers had to import everything to construct the base in 1959. Massive machines from Switzerland tunneled out the ice and snow at 1,200 cubic yards per hour. The longest tunnel, called Main Street, measured 1,100 feet long, 26 feet wide and 28 feet tall. These tunnels were covered with corrugated steel sheets for a solid structure, and then the sheets were buried in the snow.

Once the tunnels were hollowed out, special infrastructure had to be constructed. Wooden buildings provided places for men to sleep, eat and work. Special air tunnels, dug up to 40 feet deep into the floor, surrounded each building to keep cold air circulating into Camp Century. Without them, the snow would melt and destroy everything.

Even with the cold air tunnels, melting was a ubiquitous worry. Men had to constantly monitor tunnels for deformations and changes. People had to trim tunnel walls and roofs all of the time to combat melting. 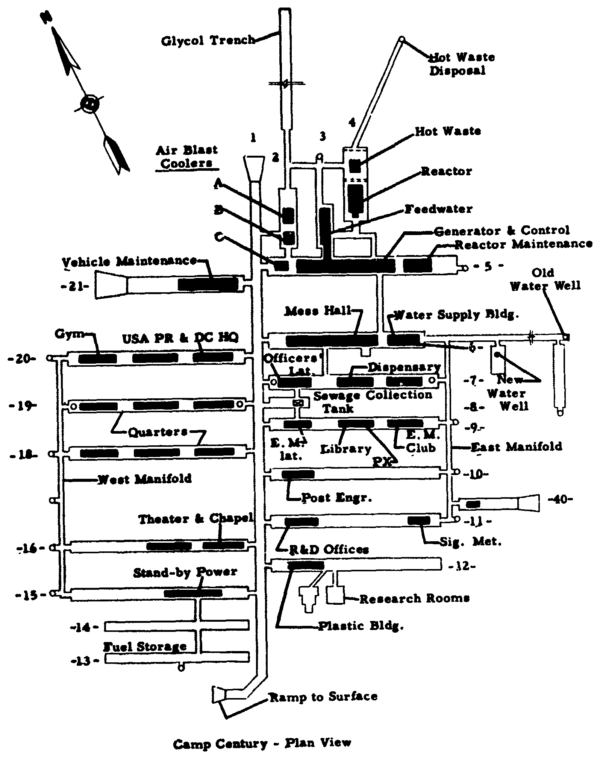 Dark Secrets Behind The Cold War Base

What started as a research base turned into a grander, darker plan.

The existence of the base wasn’t a secret – Walter Cronkite profiled it in 1961 when he visited – but the military chose to mask the true purpose of Camp Century.

The U.S. military originally wanted to store hundreds of ICBMs underneath Greenland’s ice sheet. While the engineers stationed there conducted climate research (the first core sample ever taken to study climate change came from Camp Century), Project Iceworm sought to weaponize the base.

The blueprint was to make this a storage facility for nuclear missiles. The military planned to dig 2,500 miles worth of tunnels and store up to 600 ICBMs that could hit the Soviet Union. Because the base was so remote and the Soviets wouldn’t think to launch nukes into Greenland, the belief was that the base could survive, launch its own missiles, and strike back even if the mainland United States suffered horrendous losses. 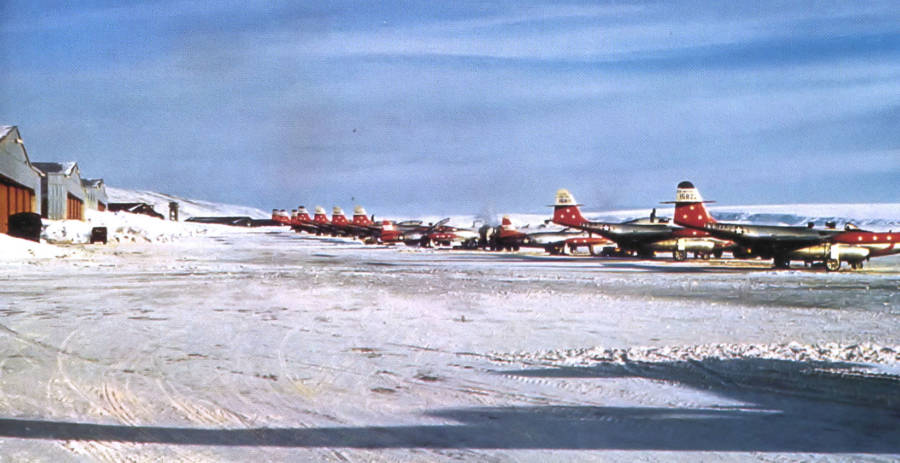 Wikimedia Commons/Air Base Thule, the closest point of supply for Camp Century, in 1955.

Eventually, military commanders abandoned the idea of storing launch-ready nukes underneath a frozen glacier. The engineering feats were too hard and not cost-effective. The military abandoned the base in 1967, just eight years after commanders first mapped out Camp Century.

The vacant facility still poses a threat even though it was decommissioned more than 50 years ago. The army thought snow and ice would continue to accumulate and keep the base buried forever. Then climate change happened.

Experts estimate that 53,000 gallons of diesel fuel, several carcinogenic compounds, and small amounts of nuclear waste may seep into the surrounding environment by 2090. That’s after the 115 feet of snow covering the base melts away due to a five-degree rise in global temperatures.

The lesson here is that even secrets that you think lay hidden beneath a permanent layer of ice and snow may come back to bite you eventually.

Luckily, there aren’t 600 nukes just waiting to be found by rogue elements.

Next, check out these four nuclear testing sites that are worse than Chernobyl. Then, check out the Nazi base camp that was found all the way up in the Arctic.