“BE MINE”: The Sweet History Of Conversation Candy Hearts 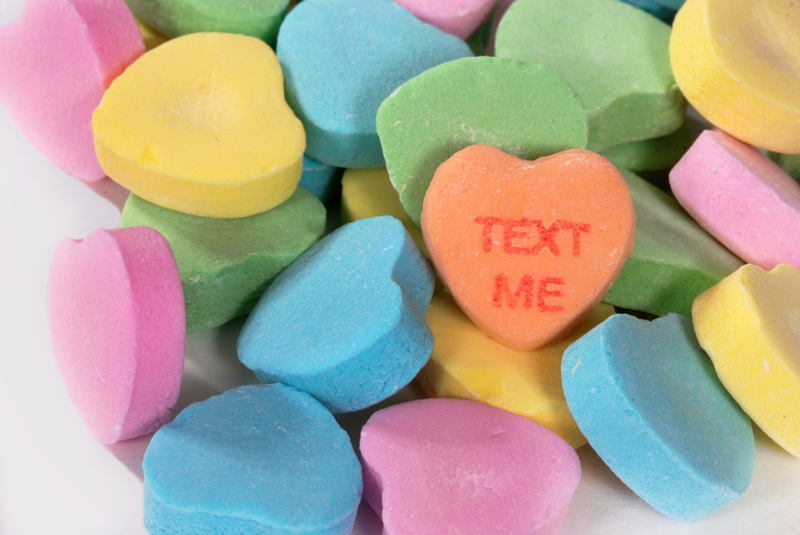 What would Valentine’s Day be without ubiquitous boxes of candy hearts popping up in grocery stores? While they might be a point of annoyance for some, the candies are continuing an almost one hundred and fifty year old tradition, and one that helps highlight the ways culture and technology influence the ways we talk about romance.

First manufactured by the New England Candy Company in the 1860s, the earliest candy hearts were similar to fortune cookies. The candies were called “cockles” — they looked like shells, and one could take a tiny piece of paper with a written saying or “motto” and slip it inside. That’s how the candy came to have its original name: Motto Hearts.

These became extremely popular confections for weddings and often, the sayings were things like “Married in pink, he’ll take to drink” and “Married in white, you’ve chosen right.”

The idea to print the phrases directly on the candies came from Necco founder’s brother, David Chase. Chase not only had the idea, but developed the technology to bring it to life. At first, when the messages were more or less being hand-painted, the hearts were bigger and often contained several lines of poetry. Think, “Roses are red, Violets are blue. . .” When he developed a machine that could mass-produce them, the candies (and messages) got smaller.

Many of the sayings we associate with the candy hearts surfaced around 1902, but they also changed with the times and would reflect the popular vernacular in a given decade. That means that in the mid-fifties, at least a few candy hearts in your box would read “gay boy”; in the sixties your hearts might encourage you to “rock on”. By the time the early nineties rolled around and the product experienced its first major redesign, things like “fax me!” and “email me!” had become standard.

Necco produces around 8 million candy hearts each year, and they all sell out within the six weeks preceding February 14th. As with previous decades, this year’s hearts have sayings that are highly modern: instead of “be mine” you can give your love a candy heart that says “tweet me”.

Fine by me, as long as I don’t get one that says #YOLO.