Uncovered in New York in 1869, the Cardiff Giant was a 10-foot-tall "petrified man" that countless Christians believed was proof of the existence of Biblical giants. 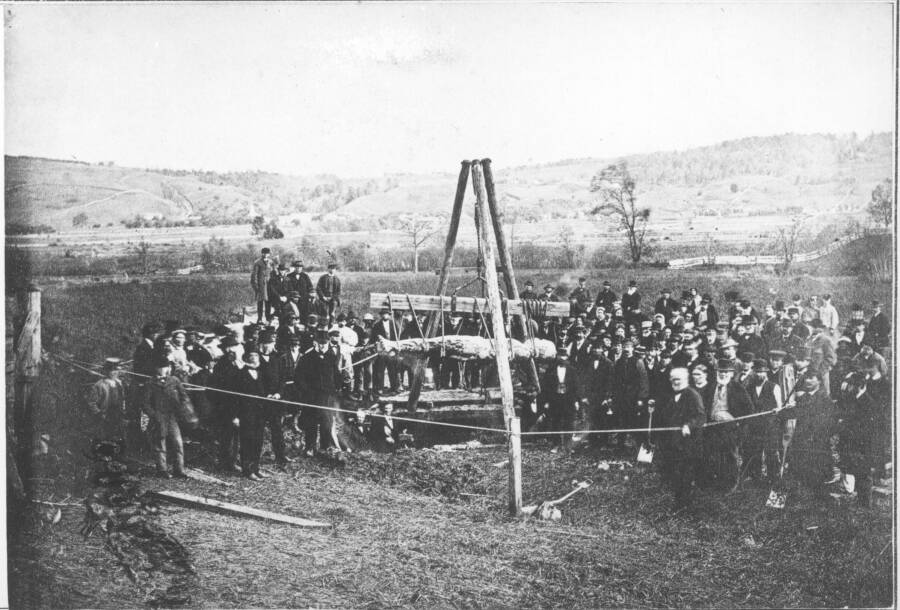 Onondaga Historical AssociationA group of men stand around the excavation site in 1869.

The 19th century was a golden age for hoaxes. So when two men found a 10-foot-tall giant buried in Cardiff, New York, thousands of people paid to see it. As headlines reported the discovery of the so-called “Cardiff Giant,” only a small number of dissenters questioned the petrified giant theory.

But because the story was so popular, no one was willing to go all the way and claim the object itself was a fake. Theories ranged from genuine belief that the stone man was a genuine petrified Biblical giant to a carving made by a Jesuit priest to impress Indigenous Americans centuries before.

And by the time the truth was revealed in just a few short months, the Cardiff Giant hoax had become the most sensational news item in America. And even today, you can still visit multiple sites that claim to have the “real” Cardiff Giant, including the Farmers’ Museum in Cooperstown, New York.

The Cardiff Giant Created A Firestorm Of Attention 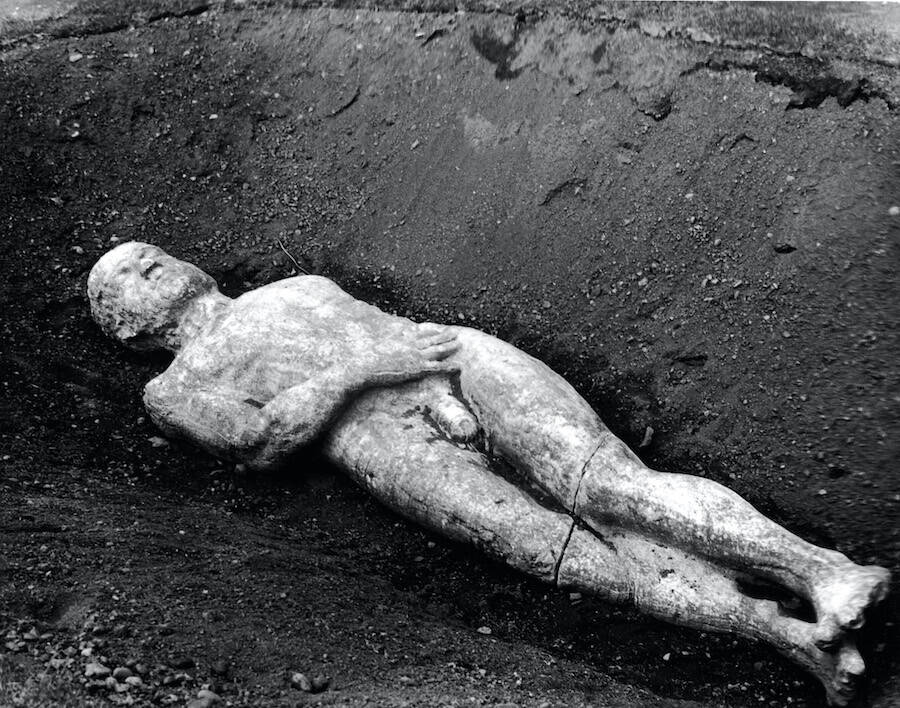 While digging a well on Oct. 16, 1869, two laborers discovered something unusual — a massive stone foot buried three feet underground. When Gideon Emmons and Henry Nichols continued digging, they uncovered what appeared to be a giant.

“I declare, some old Indian has been buried here!” one of them supposedly proclaimed.

William Newell, the owner of the property where the giant had been found, quickly declared it a major discovery. He set up a tent around the giant and began charging visitors 25 cents to see the marvel. Within two days, Newell had raised the price to 50 cents. Business was booming.

The discovery, soon dubbed the Cardiff Giant, drew visitors from miles around. The Syracuse Journal reported that “Men left their work, women caught up their babies, and children in numbers, all hurried to the scene.”

Cornell University’s first president, Andrew White, even made the journey. “The roads were crowded with buggies, carriages, and even omnibuses from the city,” White recalled. “And with lumber-wagons from the farms — all laden with passengers.”

When visitors arrived at Cardiff, they were ushered into Newell’s tent. There, they came face to face with the giant.

“Lying in its grave with the subdued light from the roof of the tent falling upon it, and with the limbs contorted as if in a death struggle, it produced a most weird effect,” Cornell president Andrew White said. “An air of great solemnity pervaded the place. Visitors hardly spoke above a whisper.” 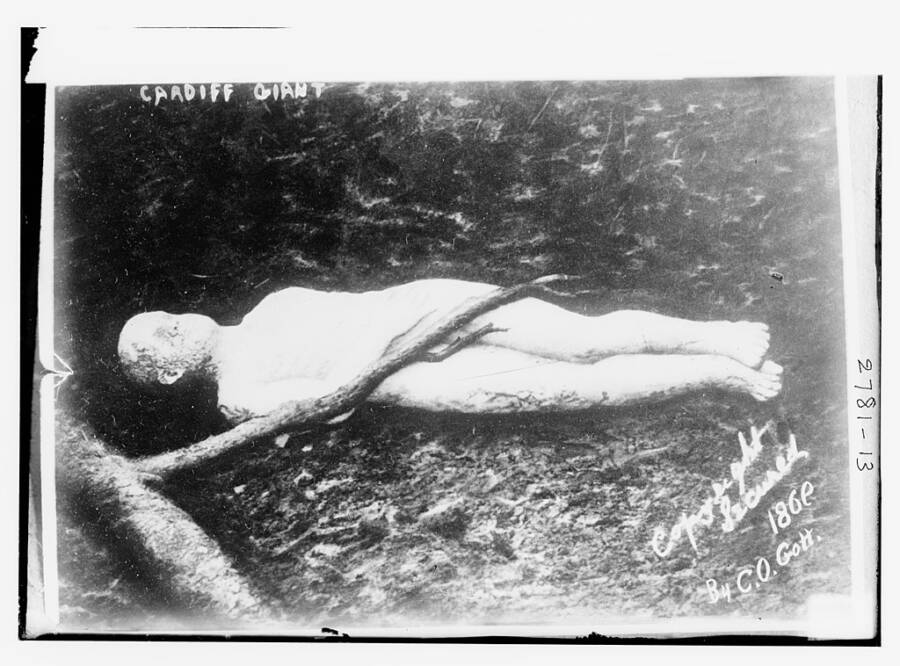 Bain News Service/Library of CongressAn 1869 photo shows the excavation of the Cardiff Giant.

Newspapers lauded the find. The Syracuse Daily Standard called the Cardiff Giant “A NEW WONDER,” while another paper declared it “a singular discovery.”

Visitors Debated The Origins Of The Cardiff Giant 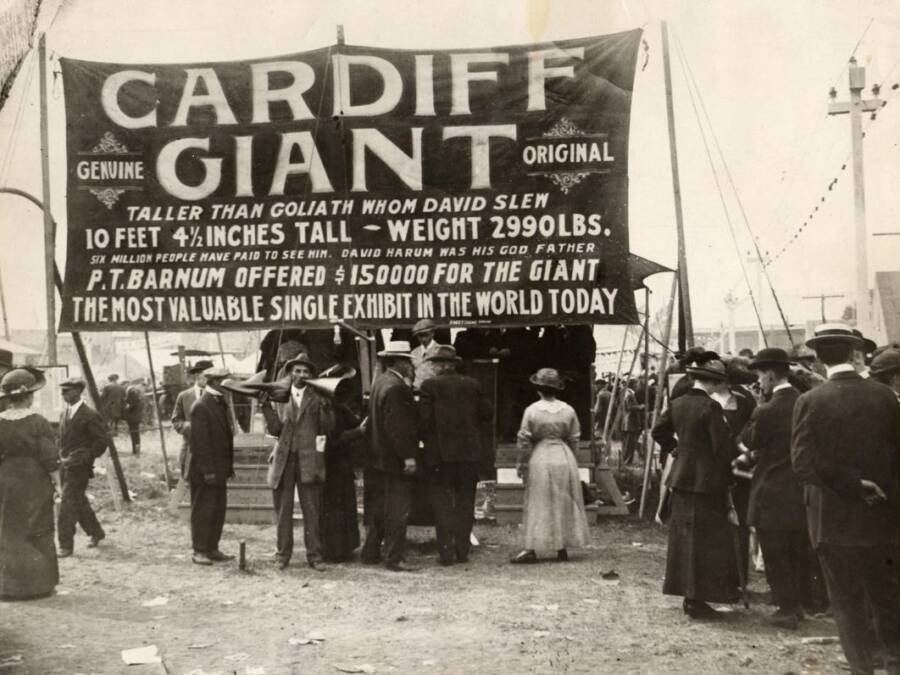 The Farmers’ MuseumIn the first two weeks after the Cardiff Giant was unearthed, more than 3,000 people came to see it.

According to one Syracuse pastor, the Cardiff Giant offered Biblical proof. “Is it not strange that any human being, after seeing this wonderfully preserved figure, can deny the evidence of his senses,” the pastor wondered.

“And refuse to believe, what is so evidently the fact, that we have here a fossilized human being, perhaps one of the giants mentioned in Scripture?”

Cornell University’s president said that believers in the Biblical giant theory acted “in spite of all scientific reasons to the contrary.”

Meanwhile, a science lecturer from Syracuse put forth a different theory: French Jesuits carved the statue centuries earlier. The Jesuit statue theory drew support from New York State Geologist James Hall, who called the stone giant “the most remarkable object yet brought to light in our country.”

As the debate raged, William Newell threw up his hands and suggested re-burying the giant at one point. But his neighbors reportedly stopped him, arguing the Cardiff Giant had historical value.

As it turned out, the Cardiff Giant was a hoax all along. William Newell’s relative George Hull created the statue during the 1860s after a heated argument with a Methodist preacher who insisted on a literal interpretation of the Bible. Even when it came to verse Genesis 6:4 – “there were giants in the earth in those days” – the preacher held his ground.

After the argument, Hull said, “Suddenly, I thought of making a stone giant, and passing it off as a petrified man.” 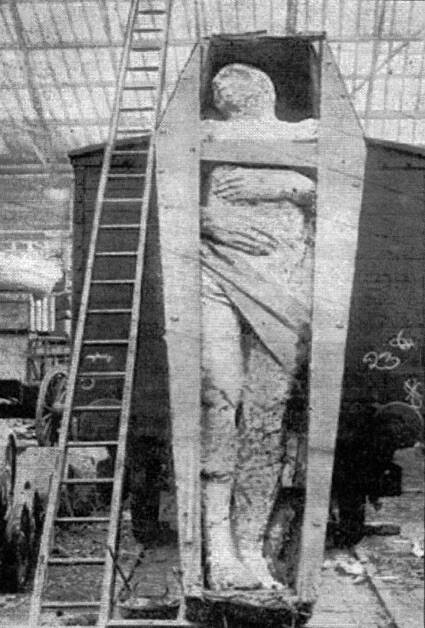 Wikimedia CommonsBy the late 19th century, copycats proliferated. This giant was “found” in Ireland and photographed for The Strand Magazine in 1895.

Hull’s hoax actually began in Iowa. He bought a huge block of gypsum under the cover story that it would become an Abraham Lincoln monument. Hull shipped the block to Chicago, where a German stone cutter carved it at his workshop at 940 N. Clark Street.

The rails took the giant from Chicago to upstate New York, where Hull and Newell buried it in November 1868.

Nearly one year later, Newell ordered two laborers to dig a well exactly where the Cardiff Giant lay buried. Within weeks, Newell and Hull were able to cash in on what was a small fortune at the time.

But the Cardiff Giant hoax wasn’t just about getting rich quick. Hull also wanted to prove a point about science and faith. If people fell for the hoax, it would prove their gullibility and undermine a literal interpretation of the Bible.

As an atheist in the 19th century, Hull was part of a minority and felt like a social outcast. So he wanted the hoax to transform his critics into fools. 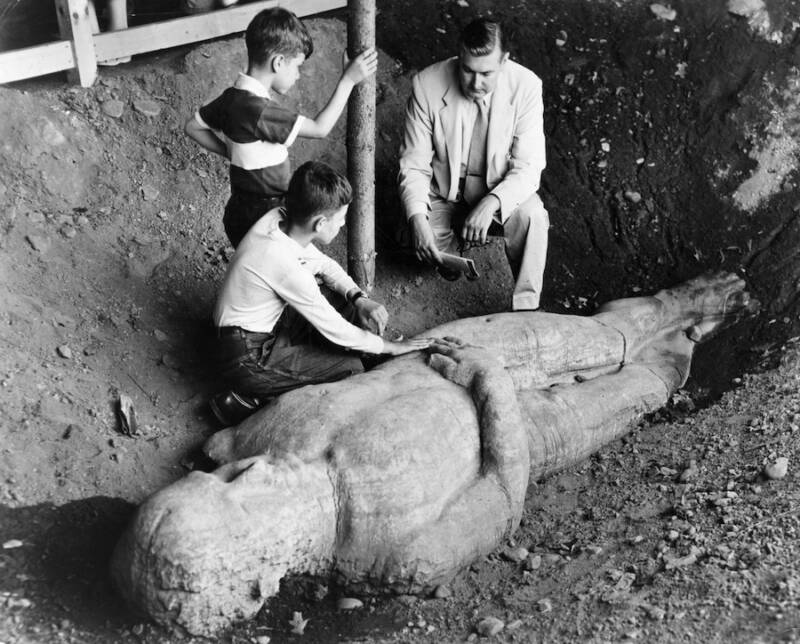 Pictorial Parade/Archive Photos/Getty ImagesThe Cardiff Giant is still a leading attraction at the Farmers’ Museum in Cooperstown, New York. Circa 1955.

Hull became so obsessed with the hoax that he spent nearly $3,000 creating the phony giant. However, the investment paid off when a group of businessmen forked over $30,000 for a stake.

The Hoax Triggered A Lawsuit When P.T. Barnum Created A Replica

When showman P.T. Barnum offered to buy the Cardiff Giant for $50,000 and was turned down, he hired a sculptor to fashion a replica. Outside of Barnum’s Manhattan museum, ads blared: “What is it? Is it a Statue? Is it a Petrification? Is it a Stupendous Fraud?”

Barnum’s giant wasn’t the only copy of the Cardiff Giant. Within months, replicas popped up across the country.

In response, the syndicate sought an injunction against Barnum. But the judge responded, “Bring your giant here, and if he swears to his own genuineness as a bona fide petrifaction, you shall have the injunction you ask for.” 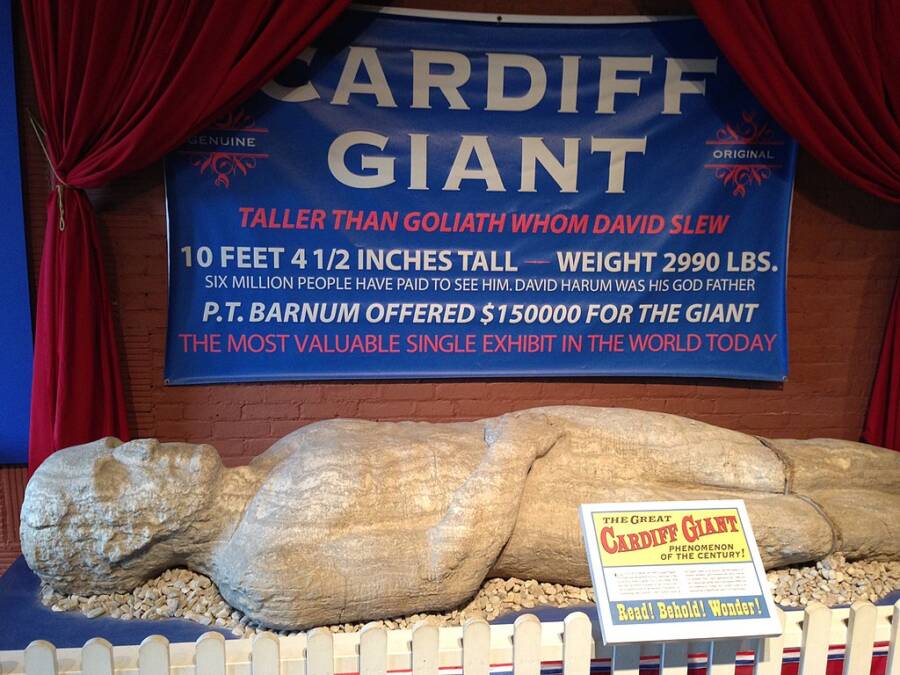 Soon news of the hoax went public. The mason who carved the giant apparently confessed to The Chicago Tribune, and a respected paleontologist denounced the giant as “a most decided humbug.”

The Philadelphia Inquirer summed up the wave of petrified giants sweeping the country: “It is rather rich that we should be victimized by such a fraud upon a fraud.”

Yet even after the hoax was exposed, some still wanted to see the Cardiff Giant. The statue was showcased at the 1901 Pan-American Exposition and was later sold to a publisher in Iowa.

In 1947, the Cardiff Giant returned to New York, where viewers can still visit it today at the Cooperstown Farmers’ Museum. And a replica can be found further west in Fort Dodge, Iowa at the Fort Museum & Frontier Village.

After this look at the Cardiff Giant hoax, read about more famous hoaxes. Then learn more about the showman P.T. Barnum.