The Story Of Catherine Howard, Henry VIII’s Other Beheaded Wife

Catherine Howard was just a teenager when she married the middle-aged King Henry VIII in 1540 — and she was decapitated on his orders just two years later. 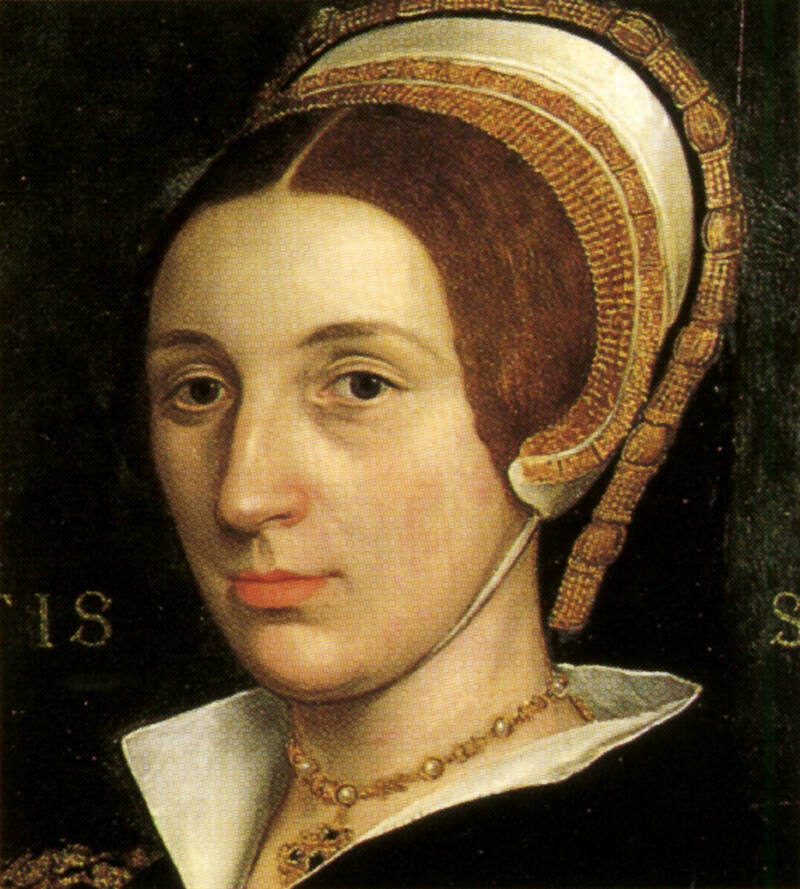 Wikimedia CommonsA possible portrait of Catherine Howard, the fifth wife of Henry VIII — and the second of his to be decapitated.

On February 13, 1542, Catherine Howard mounted the scaffold and turned to face the crowd assembled near the Tower of London. Many in the audience that day may have felt a strange sense of déjà vu. Six years earlier, they’d watched another Queen of England beheaded in this very same spot — King Henry VIII’s second wife, the controversial Anne Boleyn.

Howard, although much younger, was Boleyn’s cousin and had also been accused of adultery. It was alleged that the young queen was an “abominable, base, carnal, voluptuous, and vicious life, like a common harlot, with diverse persons.”

Howard knelt on the scaffold. The men in the crowd removed their hats. The queen’s last words are disputed; she may have claimed she’d rather die the wife of her alleged lover Thomas Culpeper than the king’s. Or, she may have prayed for the king’s welfare. Accounts differ.

But what seems certain is that Catherine Howard led a brief life dominated by men from early girlhood. Indeed, Catherine Howard had even sewn this motto onto her sleeves, No other will but his.

Doomed to live in the Tudor-era patriarchy, Catherine Howard lay her head on the executioner’s block. She was likely less than 20 years old. 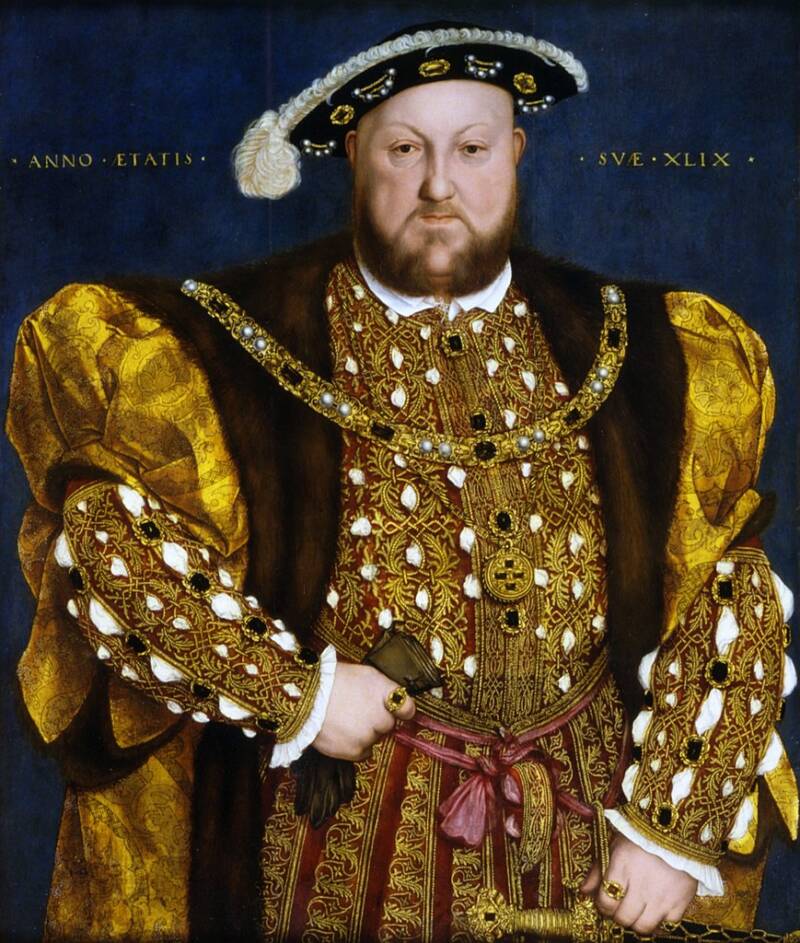 Wikimedia CommonsHenry VIII in 1540, the year he married Catherine Howard.

Catherine Howard was born in England just as the country entered an age of turmoil. Although her exact date of birth is unknown, most historians believe she was born around 1524 — the same year that King Henry VIII stopped sleeping with his first wife, Catherine of Aragon, and shortly thereafter began his pursuit of Anne Boleyn.

Despite belonging to a powerful family, Howard’s childhood was volatile. Her father, Edmund, was nowhere near as powerful or respected as his eldest brother Thomas Howard the Duke of Norfolk. Edmund struggled with debts and when his wife died, sent his daughter to live with her step-grandmother Agnes Howard, the Dowager Duchess of Norfolk, in the early 1530s.

Howard’s step-grandmother supervised her little and she was exposed to sexual suitors at an early age. Her piano teacher, Henry Manox, was the first to take an intense interest in her. Howard was likely only 13 and Manox at least twice her age when he admitted to knowing her “secret parts.”

Howards’s loss of innocence dovetailed with England’s own sexual politics. King Henry VIII’s affair with Anne Boleyn had intensified and the king found a way to disentangle himself from his long marriage to Catherine of Aragon. He accused his first wife of lying about being a virgin when they married, an accusation that King Henry VIII would leverage against his wives again and again, including Howard. 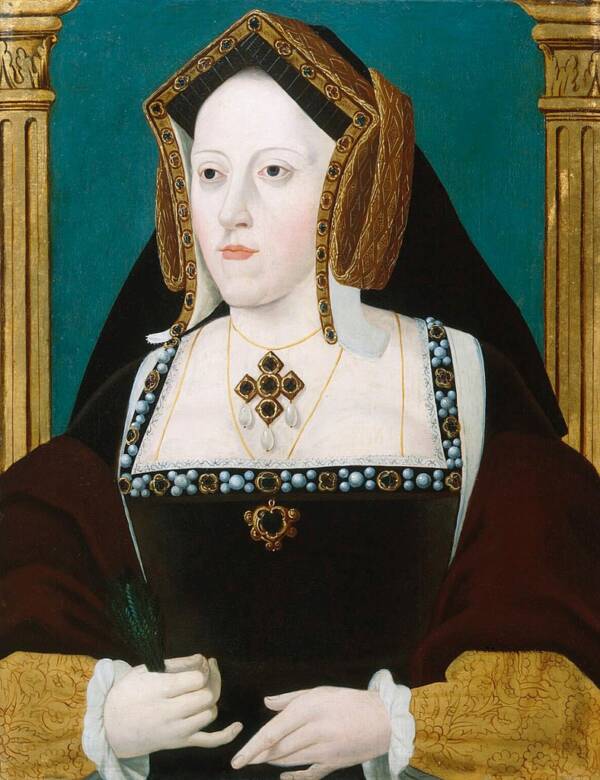 If Catherine of Aragon had not been a virgin, then the marriage was void and if she had lied about her virginity, then King Henry was free to marry Anne Boleyn. But at this point, the truth mattered little as Henry VIII was determined to marry Boleyn in hopes of finally producing a male heir.

As the controversy raged across the country, Catherine Howard experienced her own personal dramas. Around 1538, she became involved with a young nobleman named Francis Dereham. Howard was still a teenager at this point, though she did later acknowledge that Dereham had “used her… as a man doth his wife.” Servants also claimed that they had engaged in “puffing and blowing.”

That affair ended when Dereham moved to Ireland and Howard to the king’s court. Her uncle, the Duke of Norfolk, had arranged for her to become a lady-in-waiting to Henry’s fourth wife, Anne of Cleves.

The Fatal Courtship Of Howard And Henry VIII 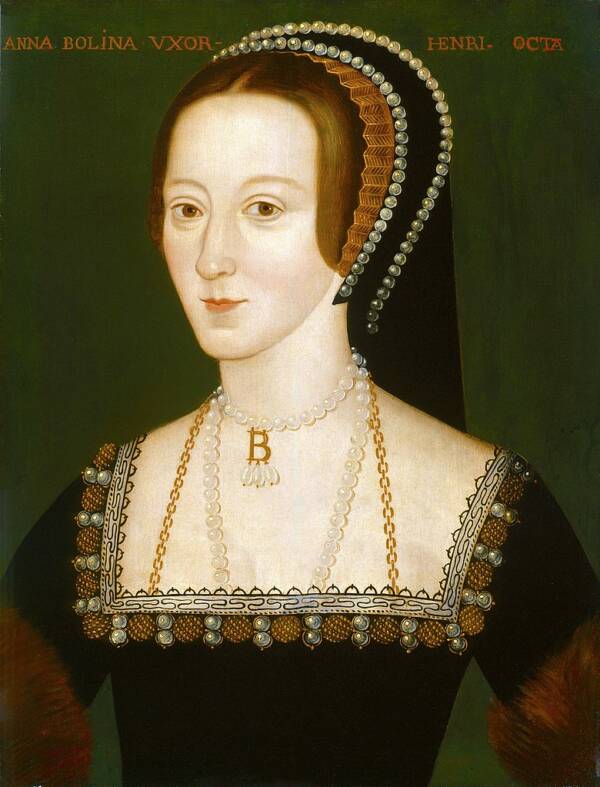 By the time Henry VIII encountered Catherine Howard in his court, he was reaching the end of his fourth marriage. By now, Henry had accused his second wife Anne Boleyn of adultery and treason and had her beheaded. His third wife, Jane Seymour, had been one of Boleyn’s maids and she successfully produced a male heir for the king but died doing so. Finally, the king had been paired with Anne of Cleves.

Though the marriage was destined to be short-lived, Cleves would escape with her life. Their match had been a political one and the king found himself deeply disappointed in it. “I see nothing in this woman as men report of her,” he sneered.

Not only did Henry VIII find Anne of Cleves unattractive, but he also struggled to communicate with her as she was from a German Protestant state. Their wedding night was a disaster. Over the course of four nights, Henry VIII reportedly went to her bed but couldn’t consummate the marriage. As he was wont to do, the king blamed his wife.

However, it’s possible that Henry VIII — obese, diabetic, and nearly 50 — was actually impotent. 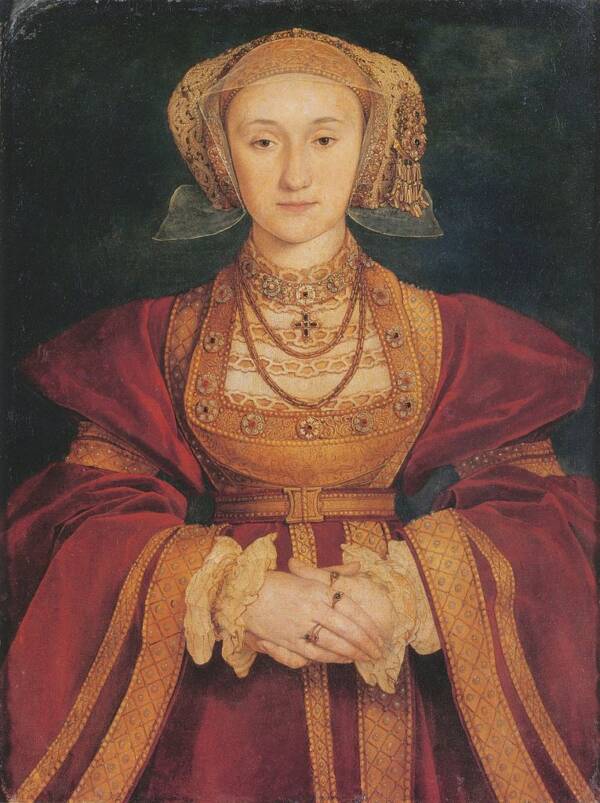 Feeling trapped in his new marriage, the king’s eye wandered. His gaze settled on a teenage lady-in-waiting to the new queen. Henry VIII had married Anne of Cleves in January of 1540 but by July, he wed his fifth bride: the young and beautiful Catherine Howard. The king optimistically called her his “rose without thorns.”

The Untimely Execution Of Catherine Howard

For a king who expected his wives to be virginal producers of a male heir, the fact that Howard had arrived in the king’s bed deflowered spelled danger for her from the start. But Henry VIII was blissfully unaware of this.

For a year, the marriage carried on happily — for the most part. Howard allegedly had difficulty in her new role as stepmother to the king’s oldest daughter from his first marriage, Mary I, who was seven years Howard’s senior.

Howard also made the fatal decision of appointing her ex-beau Francis Dereham to private secretary and usher to her chamber, though some sources claim she may have done this after he blackmailed her.

Then, in late 1541, a Protestant archbishop informed the king that his new bride had betrayed him. The archbishop had heard this from another Protestant man, a courtier in Henry’s court. It’s possible, however, that the two men felt threatened by the new Catholic queen and leapt at the opportunity to destroy her. The archbishop left a note in the king’s pew. 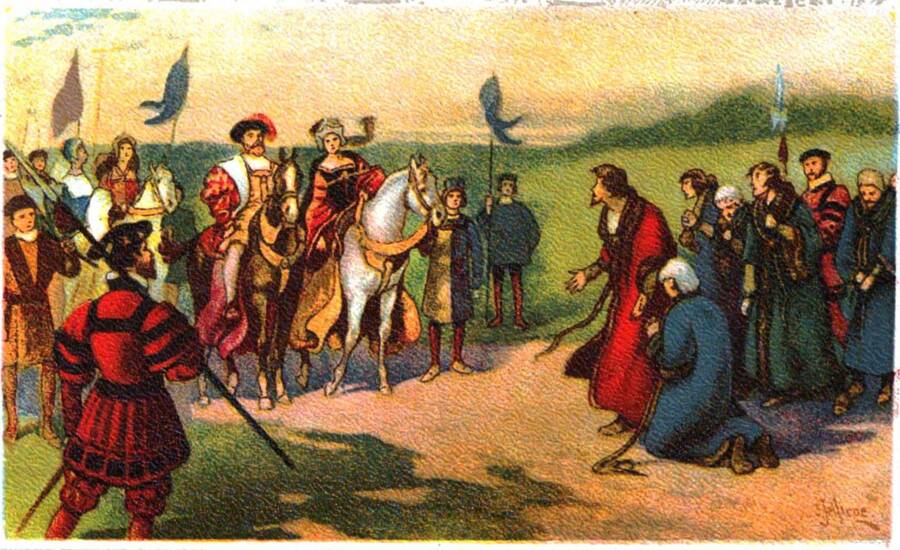 Shocked but dubious, the king demanded an investigation. Still besotted with his new bride, he felt confident that Howard was innocent. But Howard’s former sexual partners were dredged up and both Henry Manox and Francis Dereham were imprisoned and tortured.

Both admitted to having intimate knowledge of the queen; even Howard herself had confessed to the archbishop that she had slept with Dereham, though she claimed to have neither enjoyed nor consented to it.

However, the investigation also suggested that Howard had begun an affair with a gentleman of Henry VIII’s privy chamber, Thomas Culpeper. Whether or not Howard had actually slept with Culpeper remains unclear. During the trial against her, a “love letter” she addressed to Culpeper was used as evidence against her, but this correspondence may not have been a love letter at all.

In fact, Culpeper may have been trying to blackmail the queen by threatening to expose her sexual past. Under torture, Culpeper claimed that he “intended and meant to do ill with the queen and in likewise the queen so minded to do with him.” 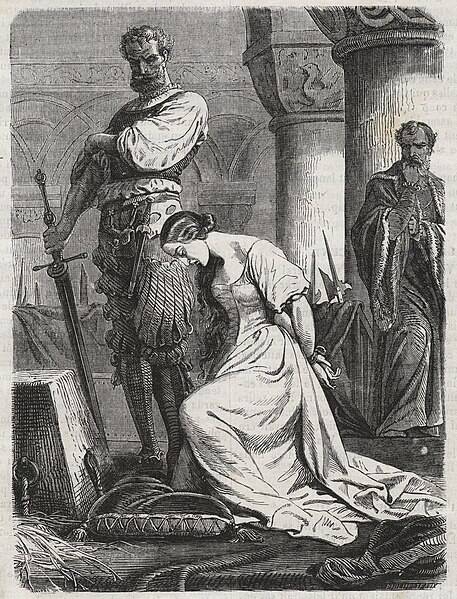 But as was typical with King Henry VIII, the truth didn’t matter.

Only the piano teacher, Manox, would escape with his life. Culpeper and Catherine Howard were beheaded. Francis Dereham met an even grislier fate: On Dec. 10, 1541, he was hanged, drawn, and quartered.

How is Catherine Howard viewed nearly 500 years after her death? As in life, she continues to draw controversy.

In popular culture, Catherine Howard is often portrayed as extremely sexual. On the television series The Tudors, she seduces Henry VIII the first time she is alone with him, running a ring up her bare thigh. In the popular trilogy Bringing Up the Bodies by Hilary Mantel, she’s portrayed as a beautiful fool and a pawn of her uncle, the Duke of Norfolk. Mantel describes Catherine Howard as “Norfolk’s plump little niece Katherine, gawping about her as if she were in church.”

Catherine Howard as depicted by Tamzin Merchant in the Showtime drama The Tudors.

Others have taken to reexamining Catherine Howard’s legacy. The Telegraph posited that Catherine Howard was not Henry VIII’s “wanton wife,” but rather a victim of “child sex abuse.”

BUST similarly wrote that Howard has been repeatedly portrayed as being “the dumb wife, the spoiled bimbo wife, the promiscuous wife. The one who got what she deserved,” but in reality she was “a girl who was tormented with sexual assault, blackmail and was constantly used as a puppet for more powerful men’s plans.”

If history is written by the victors, then it’s clear that men have controlled the narrative of Catherine Howard. They’ve written her as a vixen, a temptress, and an adulterer. But could the truth really be just the opposite? Could Howard be merely a girl controlled and used by men for their own purposes?

In death, Catherine Howard has one more similarity with her cousin Anne Boleyn: both their historical legacies have since been reexamined. Old stories propped up by men from the Tudor era have finally started to collapse under the weight of a greater, deeper scrutiny.

Next up, learn about the other wives of King Henry VIII. Then, read about Henry’s secret longtime affair with Anne Boleyn’s sister, Mary Boleyn.