Catherine Parr became Queen of England after marrying King Henry VIII in 1543. Luckily, she knew exactly what she was getting herself into. 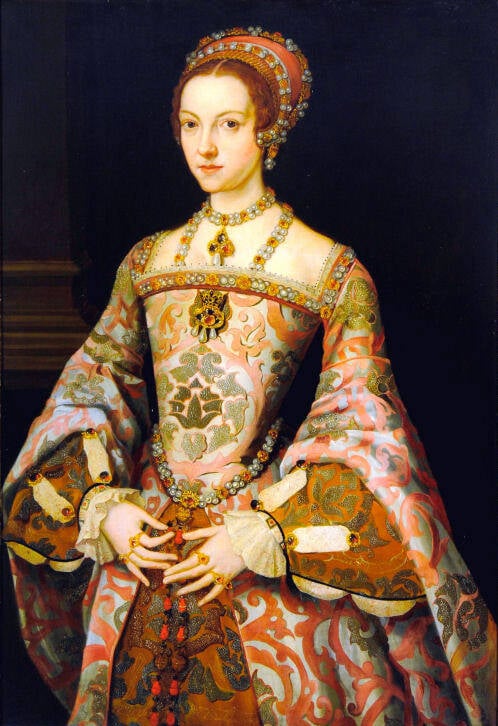 King Henry VIII’s last wife, Catherine Parr, began her marriage knowing that her husband had sent two of his former wives to the chopping block. But when Henry VIII ordered her arrest, Parr knew just what to do — and convinced him to spare her life.

From her birth in 1512, Catherine Parr shared a link with Henry VIII. Her mother, Maud Green, was a lady-in-waiting for Queen Catherine of Aragon. Green even supposedly named her daughter after Henry’s first wife.

Neither Maud nor Sir Thomas Parr, Catherine’s father, could have predicted that their daughter would grow up to become queen herself. But before Catherine Parr became the spouse of Henry VIII, she married two other men.

In 1529, when Parr turned 17, she married Sir Edward Borough, the son of Anne Boleyn’s chamberlain Thomas Borough. It was the first of Parr’s four marriages, three of which left her widowed.

After Parr’s first husband Borough died in 1533 and left her a widow, she married John Neville, 3rd Baron Latimer, making her Lady Latimer. Nearly a decade later, Parr found herself twice widowed and childless in her early 30s.

The same year of her second husband’s death, Parr married King Henry VIII. But as she wed Henry at Hampton Court Palace on July 12, 1543, she secretly loved another man — Thomas Seymour, the king’s brother-in-law and uncle to Prince Edward.

“My mind was fully bent… to marry you before any man I knew,” Parr wrote to Seymour after her husband died.

But Henry’s proposal put her in a difficult position. Could she really turn down the king and marry his brother-in-law? 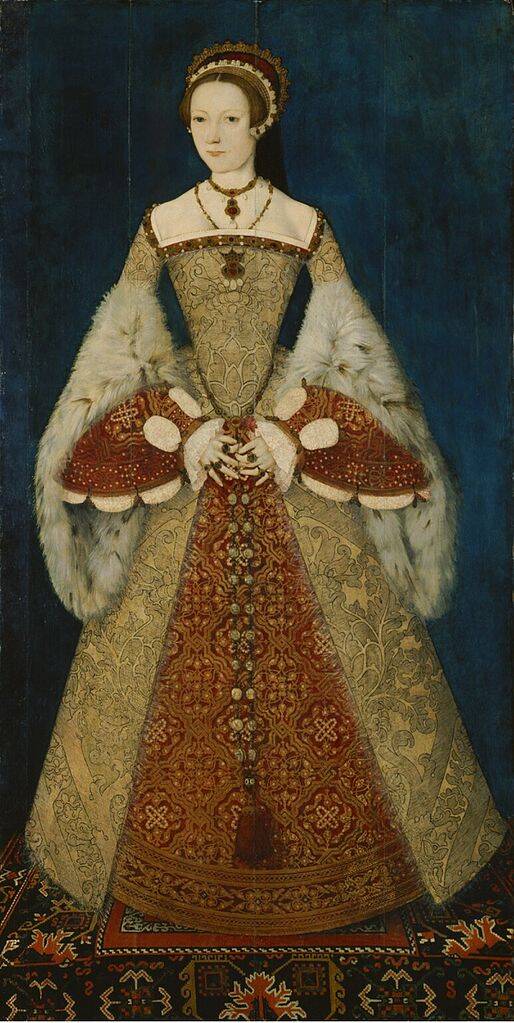 Parr made her decision in the shadow of Catherine Howard’s execution. On Feb. 13, 1542, Henry sent a second wife to the chopping block for alleged premarital affairs. When the king proposed to Parr one year later, she must have considered the fate of her predecessor.

Henry’s habit of executing his wives probably left him with few alternatives to Parr. Families who had once eagerly pushed their daughters toward Henry no longer offered up potential brides.

But why did Catherine Parr say yes to Henry VIII? Most scholars agree it was more than simply the desire to rule. Instead, Parr’s religious devotion gave her an even bigger reason to want the throne.

Catherine Parr completely devoted herself to religion. At a time when Protestants were losing favor, Parr used her position as the queen to promote her faith.

Queen Catherine Parr held Bible studies with her circle of friends and ventured into print with devotional books, prayers, and reflections on the Psalms.

In public, Parr met with ambassadors and even served as the king’s regent while he invaded France. In private, she cared for Henry’s injuries and encouraged him to try reading glasses.

Yet she couldn’t avoid scandal completely. 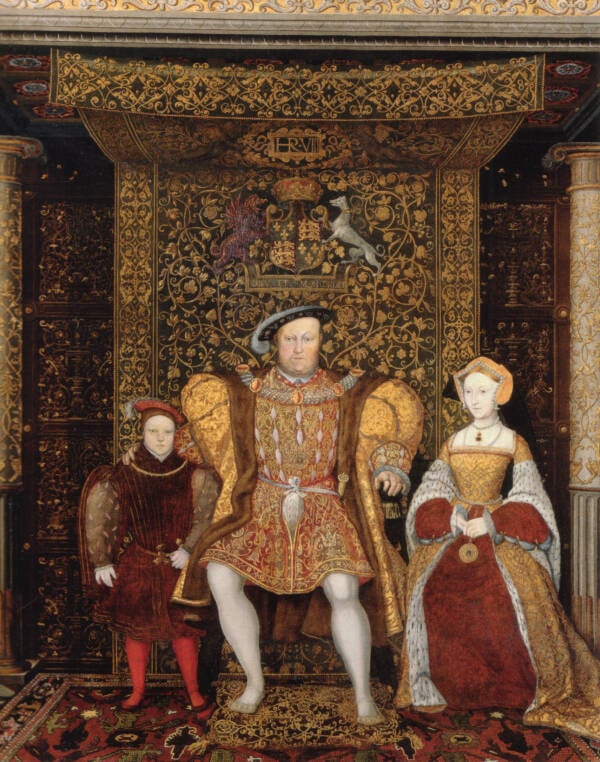 Wikimedia CommonsHenry VIII commissioned a portrait of himself with his former wife Jane Seymour and his heir Edward while he was married to Catherine Parr.

The Arrest Warrant For Catherine Parr

By 1546, Henry’s health had deteriorated. Barely able to move, the king was near the end of his reign.

Bishop Stephen Gardiner, a conservative critic of the Reformation, hatched a plot to bring down Parr.

On May 24, 1546, Gardiner and his associates had an outspoken Reformist named Anne Askew arrested. They tortured Askew and tried to get her to name Catherine Parr as a heretic. However, they were unable to force a confession out of Askew.

England’s Lord Chancellor and Master Rich “took pains to rack me with [his] own hands,” Askew said, “till I was nearly dead.” But Askew vowed, “I would rather die than break my faith.”

After weeks of torture, Askew was burned as a heretic. 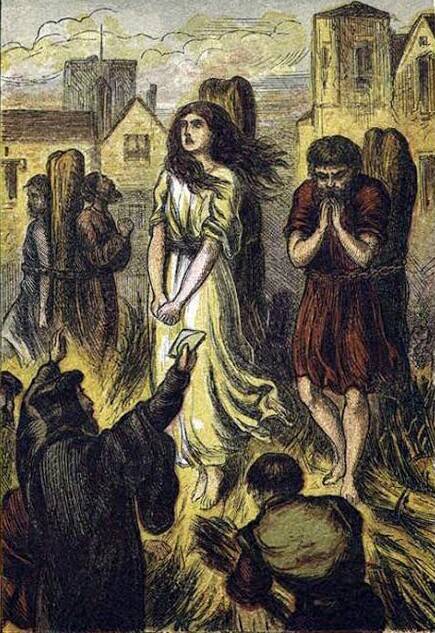 Wikimedia CommonsAnne Askew was executed for heresy shortly after she refused to accuse Catherine Parr.

Even without a confession from Askew, Gardiner pushed Henry to arrest Catherine Parr. Finally, Henry prepared an arrest warrant for his wife.

But the plot against Parr leaked. When the queen learned of the arrest warrant, she reportedly collapsed or had a panic attack.

Immediately, Parr rushed to her husband’s sickbed and begged for mercy.

Henry reminded her that she had mentioned Protestant ideas to him directly. In her defense, the queen claimed she only discussed religion with Henry in order to learn from his wisdom.

“I am but a woman,” Parr said, “with all the imperfections natural to the weakness of my sex; therefore in all matters of doubt and difficulty I must refer myself to your Majesty’s better judgement, as to my lord and head.”

“And is it even so, sweetheart!” replied the king. “And tended your arguments to no worse end? Then, perfect friends we are now again, as ever at any time heretofore.”

The next day, the Lord Chancellor arrived to arrest the queen. But Henry dismissed the soldiers, apparently having changed his mind.

When Catherine Parr became Henry’s spouse, the king rarely saw his three children — Mary, in her 20s when her father married his sixth wife, Elizabeth, who was 11 in 1544, and 7-year-old Edward, Henry’s heir. 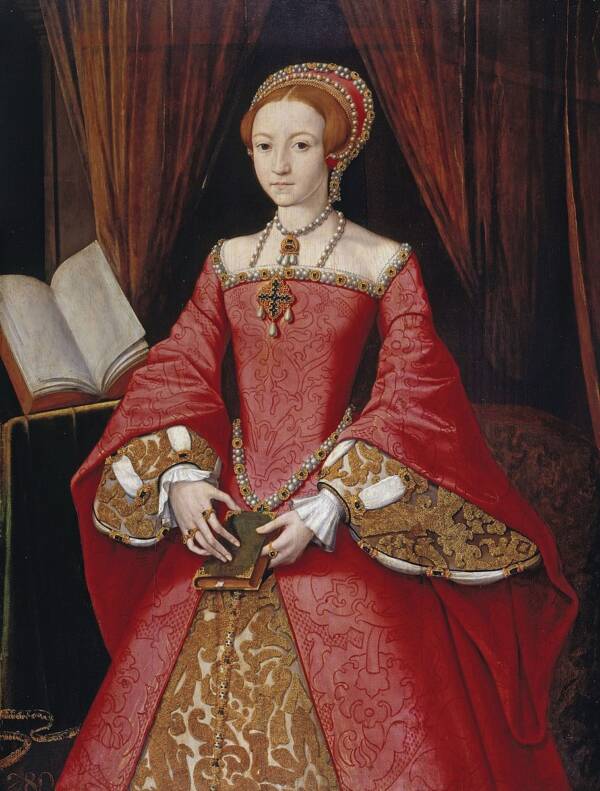 Henry’s daughters had officially been declared bastards and excluded from court. Along with Edward, they rarely spent time in London.

Parr tried to bring the family together, arranging visits from the children and encouraging a closer relationship.

In one letter, young Elizabeth Tudor wrote to her step-mother Catherine Parr, requesting “when you write to his Majesty… recommend me to him, praying ever for his sweet benediction.” Elizabeth asked to visit Hampton Court, where “your Highness and I may, as soon as possible, rejoice together with [Henry] on his happy return.” 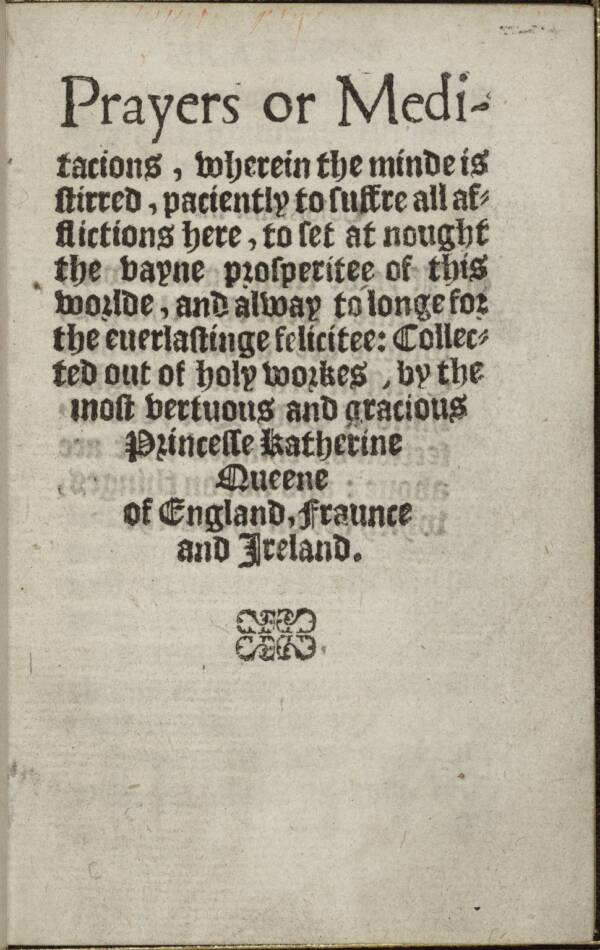 Wikimedia CommonsParr became one of the first English women to publish a book.

After Parr published a religious book, Prayers or Meditations, Elizabeth translated the best-seller into French, Italian, and Latin.

Their close relationship continued even after Henry’s death.

The Death Of Henry VIII

In December 1546, Henry’s royal physician privately warned the Privy Council that the ailing king would soon pass away. 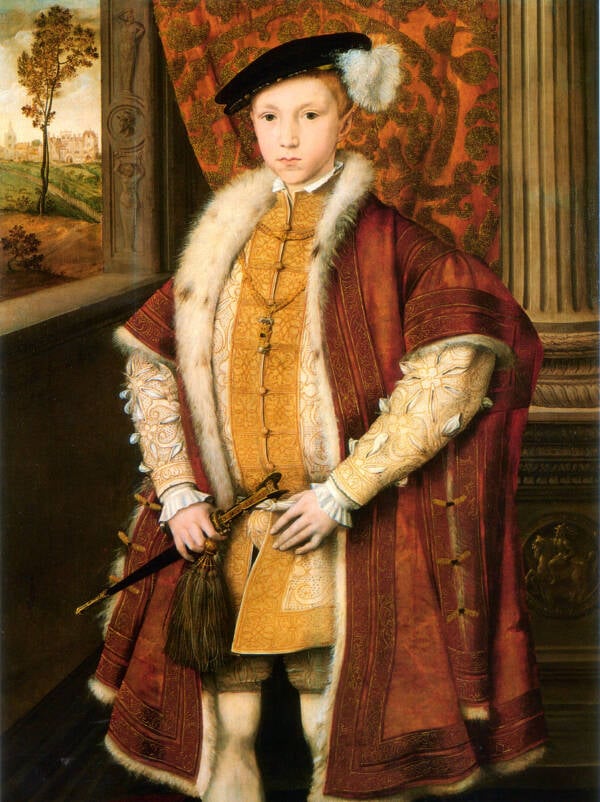 William Scrots/Wikimedia CommonsEdward was just 9 years old when his father’s death made him king.

Catherine Parr stepped back from public life, retiring from court. The three-time widow then married for a fourth time. Her final husband, Thomas Seymour, was her longtime love before she got hitched to Henry.

Although Parr had wanted to marry Seymour for years, she wasn’t his first choice. Seymour had actually asked Elizabeth Tudor, barely a teenager, to marry him. After she rejected him, Seymour wed Parr. 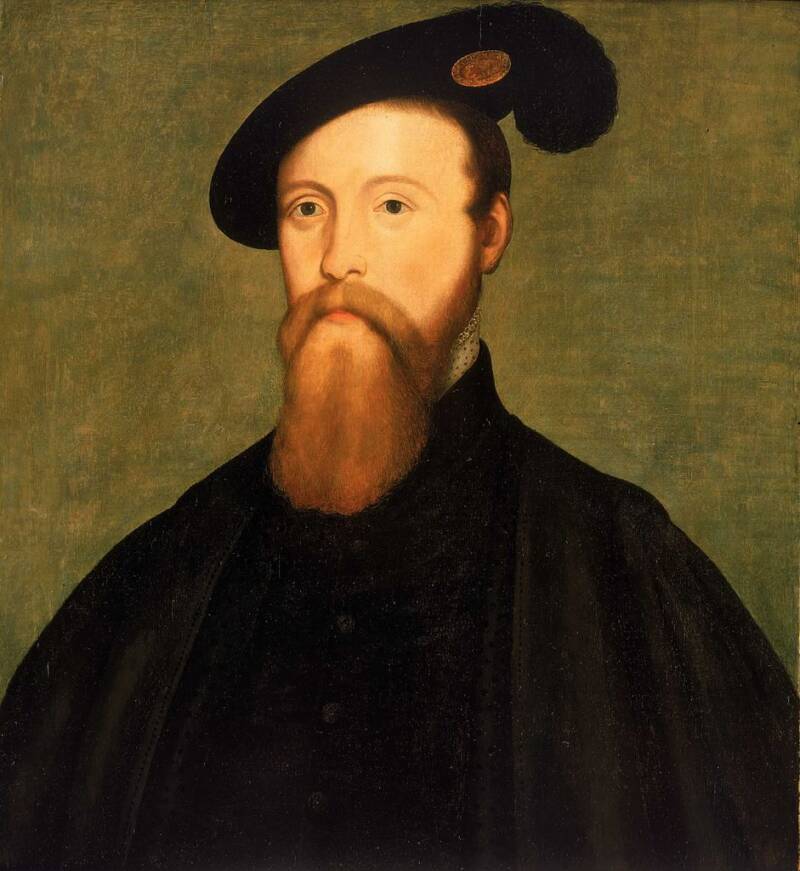 The pair married in 1547, but they kept the union secret. Henry’s death only weeks earlier meant that if Parr hypothetically became pregnant, the court would never know if the child carried Henry’s royal blood.

Surprisingly, at 35 years old, after three marriages that produced no children, Parr found herself pregnant.

As Katherine Ashley, Elizabeth’s governess, confessed, Seymour “would come many mornings into the said Lady Elizabeth’s chamber, before she were ready, and sometimes before she did rise,” where he would “ask how she did, and strike her upon the back or on the buttocks familiarly.”

Ashley even saw Seymour try to kiss the young girl.

In 1548, Catherine Parr reportedly discovered Elizabeth in Seymour’s arms. In response, she sent Elizabeth away to live with a family friend named Sir Anthony Denny.

In August 1548, Catherine Parr went into labor. She gave birth to a daughter, Mary Seymour, but quickly came down with a deadly fever.

Delirious, Catherine Parr told her attendants that her husband didn’t love her. She also accused him of poisoning her. 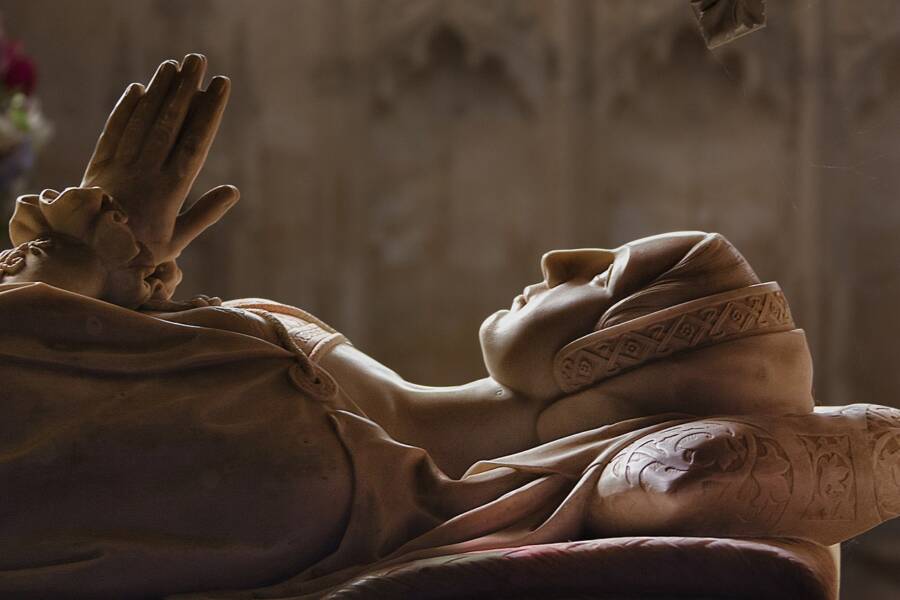 Just over a week after giving birth, Catherine Parr died. She was only 36 years old.

Within a year, Thomas Seymour was arrested for treason and plotting to marry Elizabeth Tudor. After a swift conviction and execution, Bishop Hugh Latimer quipped, “Whether he be saved or no, I leave it to God, but surely he was a wicked man, and the realm is well rid of him.”

Elizabeth herself reportedly said, “This day died a man of much wit and very little judgment.”

Did Seymour really kill Catherine Parr to clear a path to Elizabeth Tudor? If so, his plan ended with his own execution on Tower Hill. 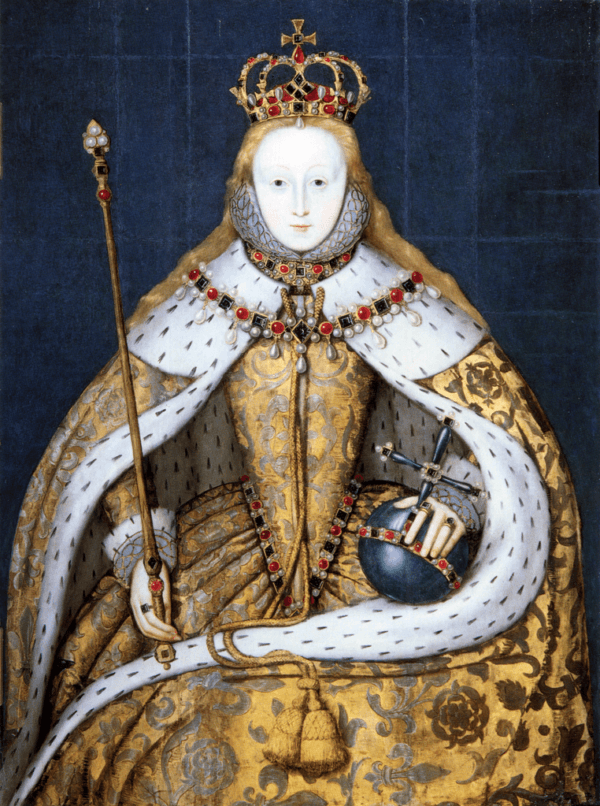 Parr’s Legacy As The Survivor

The sixth spouse of Henry VIII survived her marriage to him by understanding him better than any of his other wives.

Catherine Parr knew she walked a dangerous line in her marriage. She narrowly escaped the fate of Anne Boleyn and Catherine Howard when Henry signed a warrant for Parr’s arrest.

Luckily, her quick thinking worked when the tides turned against her.

Rather than fight back in court, as Anne Boleyn had tried to do, Parr threw herself at the king’s mercy. By reminding Henry of his all-powerful position in England, the queen saved herself.

After this look at Catherine Parr, learn about Henry VIII’s other wives. Then, read about the tragic life of Henry VIII’s cousin, Mary Queen of Scots.