The Strange And Misunderstood History Of The Chastity Belt

According to legend, Medieval men relied on chastity belts to keep their wives from cheating. But how much of that story is true?

Medieval men were worried. Here they were, heading off to war or out on a pilgrimage, with no one to check the fidelity of their wives. What to do? Well, the Medieval men came up with a Medieval solution: The chastity belt.

The device, a metal contraption that fit around a woman’s waist — locked, of course, with a key held by her husband — has long bedeviled historians. Chastity belts appear in Medieval texts dating back to the 15th century. But there’s suspiciously little physical evidence to support their existence. 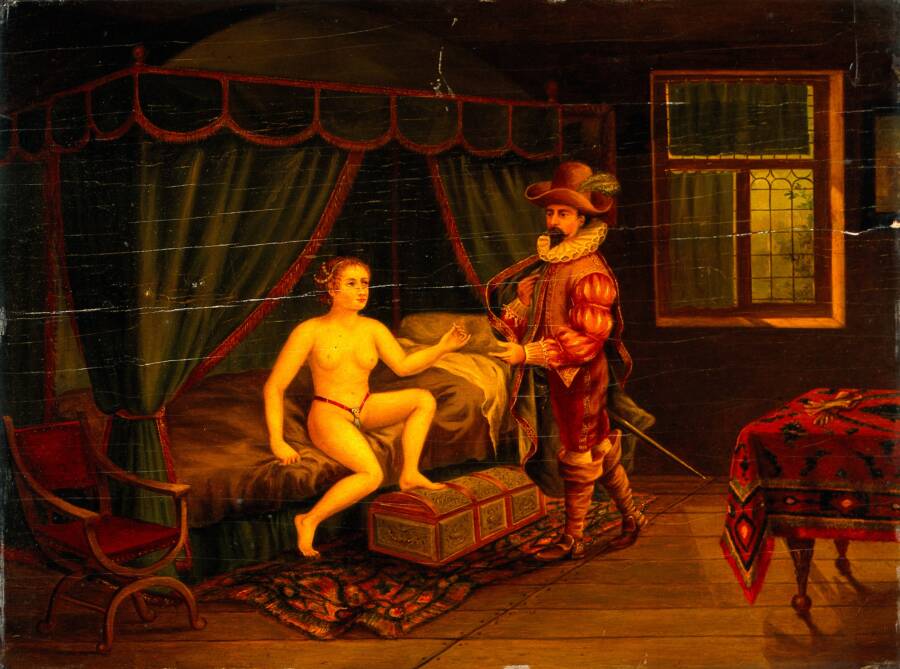 In fact, most historians doubt that the chastity belt existed at all. Rather, it seems to have been a metaphor or a joke.

So, what is a chastity belt?

What Was The Chastity Belt? 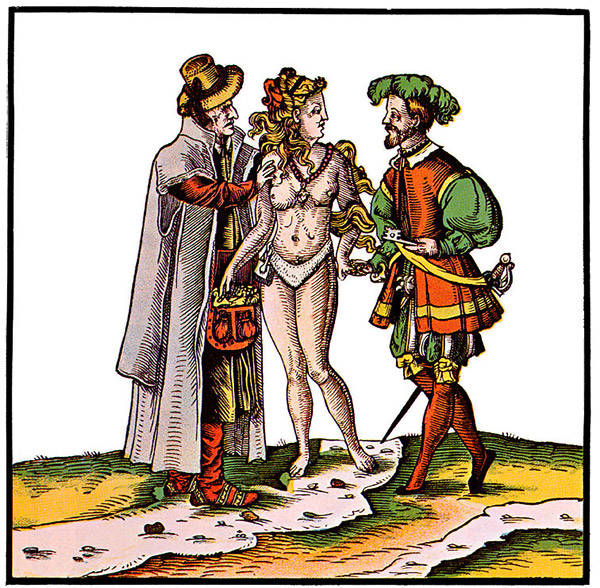 First things first — what is a chastity belt?

The definition of a chastity belt is fairly simple. Basically, it’s a belt meant to “protect” a woman’s chastity. In Medieval drawings, it appears as a metal contraption with a lock at the front. Women who wore the belt couldn’t have sex without their husband’s permission — and his key.

The design of the belts could vary, however. Some had spikes meant to deter any possible suitors. Others used leather straps, instead of metal. One chastity belt on display at the Science Museum in London includes a pretty but improbable flower design meant to allow defecation. 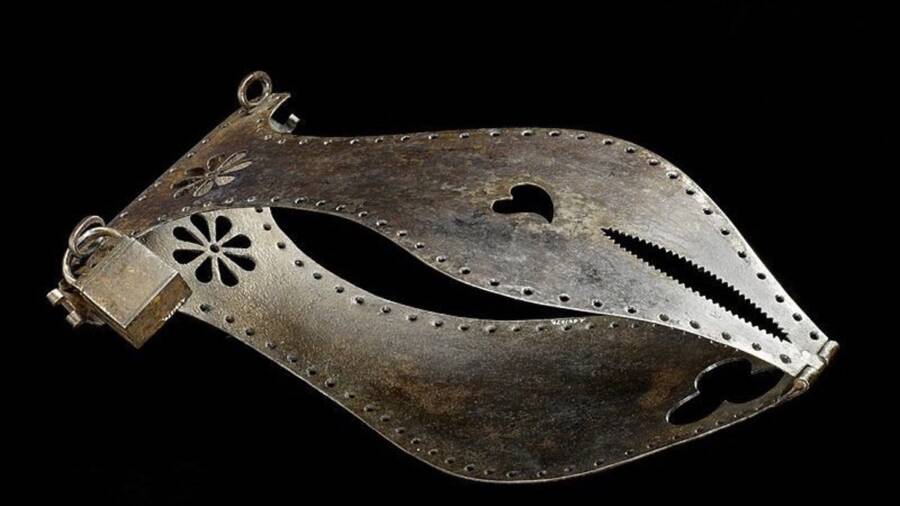 Several other museums also have chastity belts on display. One, at the Musée de Cluny in Paris, is alleged to have belonged to Catherine de Medici. This belt is a simple velvet hoop with a small iron plate at the front. Another belt, purported to have belonged to Anne of Austria, is a hinged pair of plates attached by a metal waistband.

There’s just one problem with all these museum displays. As authentic as they seem, the so-called Medieval artifacts are far more modern than Medieval. A test of the metal in Catherine de Medici’s belt revealed that it originated in the early 19th century, hundreds of years after her death in 1589.

So where did the myth of the chastity belt even come from?

How The Chastity Belt Appears In History 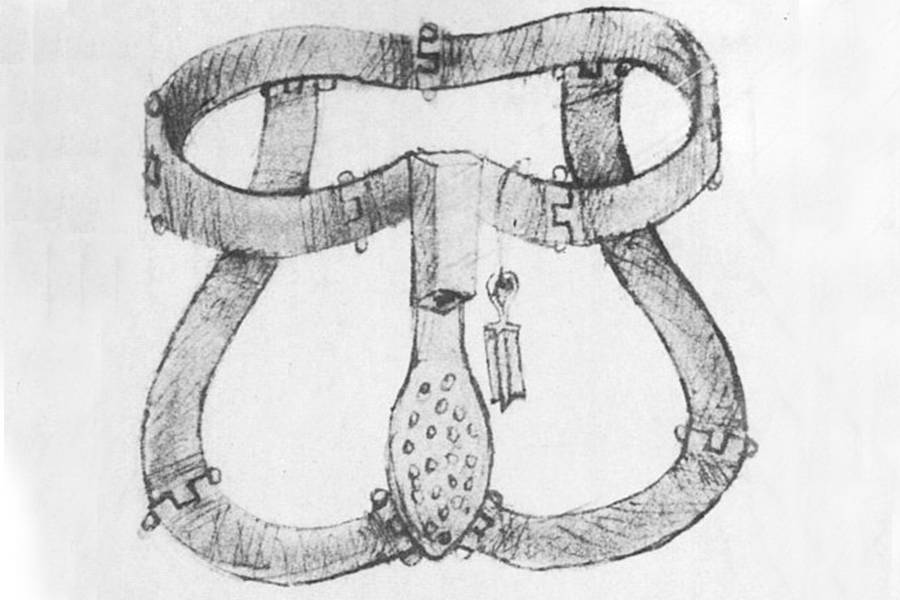 The earliest mention of chastity belts comes from ancient Rome. Then, they were not metal contraptions, but simple knots.

Sarah E. Bond, an assistant professor of Classics at the University of Iowa, explained that brides in ancient Rome wore white tunics with a Herculean knot — also known as a “love knot” or a symbol of “undying love” — to signify her chastity. Her husband untied the knot on their wedding night.

This is likely where the first ideas about such devices, and the phrase “tying the knot,” originated.

In the centuries that followed, ideas about women’s chastity remained firmly entrenched in European culture. However, they didn’t take a physical form until the 15th century. Then, a German military engineer named Konrad Kyeser published a work on military engineering called Bellifortis.

Among his drawings of catapults, armor, and, torture devices, the chastity belt appears for the first time. But Bellifortis also contains fart jokes and an idea to make people invisible. And Kyeser’s note certainly suggests that he wasn’t seriously considering locking up women into a device to prevent them from having sex.

“Padlocks unto the four-legged creatures, breeches unto the women of Florence, A joke binds this lovely series together, I recommend them to the noble and obedient youth,” Kyeser quipped.

That said, something about the definition of a chastity belt seemed to enchant Medieval Europeans. Drawings of the device continued to appear throughout the 16th-century. Drawings — not physical specimens.

And even these illustrations treated the belts lie something of a joke. In one engraving, a woman demurely hands her husband the key to her belt as he prepares to leave. Behind their bed, two men lie in wait, holding a duplicate key.

The Myth Vs. The Reality 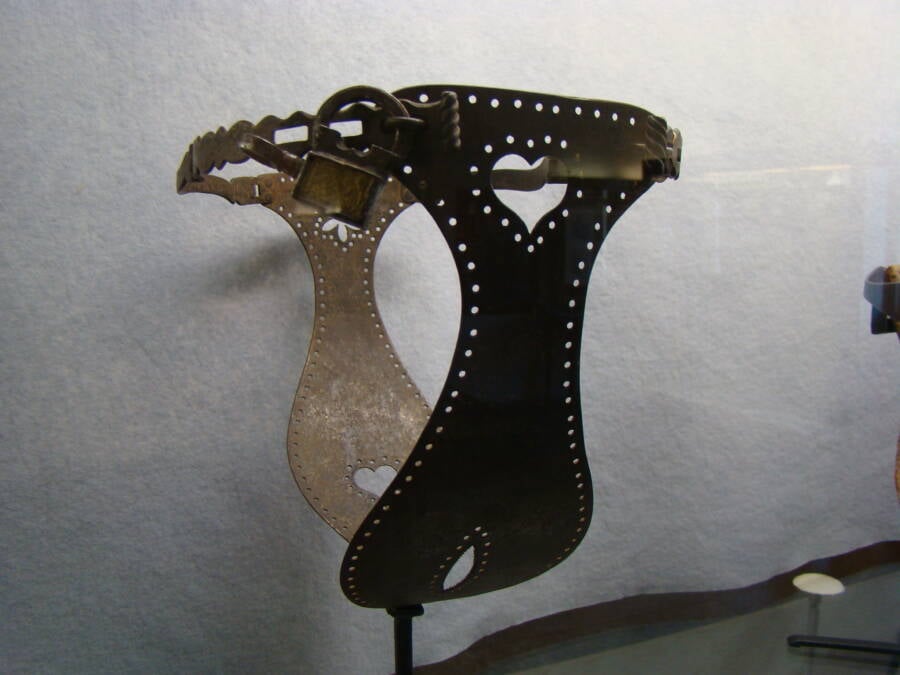 All that’s to say that chastity belts very likely did not exist — except as a joke.

“As a medievalist, one day I thought: I cannot stand this anymore,” said Albrecht Classen, a German Studies professor at the University of Arizona. His book The Medieval Chastity Belt: A Myth-Making Process went out to obliterate the idea that such a device had ever existed.

“It’s a concise enough research topic that I could cover everything that was ever written about it,” he said. “and in one swoop destroy this myth.”

His book lays out why the belts were so improbable. First of all, there’s scant evidence to suggest they really existed. Secondly, their use would surely have been fatal for women. “A woman would not even survive the consequent hygienic and health problems after several days,” Classen noted. In other words, the mere definition of a chastity belt — an iron undergarment — makes it painful, dangerous, and potentially fatal.

Other historians back him up.

“I have traveled abroad and looked at art collections and, as yet, havenꞌt seen a chastity belt that can be proved to be Medieval in origin,” said Lesley Smith, a late-16th century historian. In other words, the belts on display in museums do not come from Medieval times.

Indeed, the British Museum notes that: “It is probable that the great majority of examples now existing were made in the eighteenth and nineteenth centuries as curiosities for the prurient, or as jokes for the tasteless.”

“People delight in delving into sex. They can say they only have a historical interest, but in reality, they have a prurient interest,” Classen said. “It’s a fantasy.”