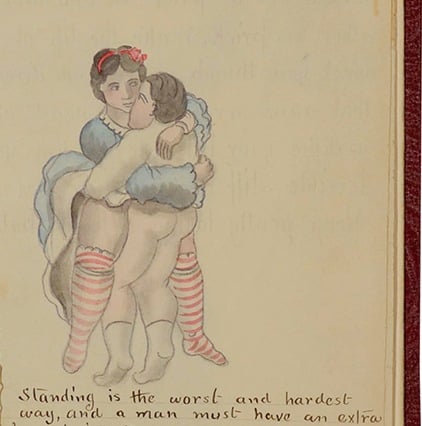 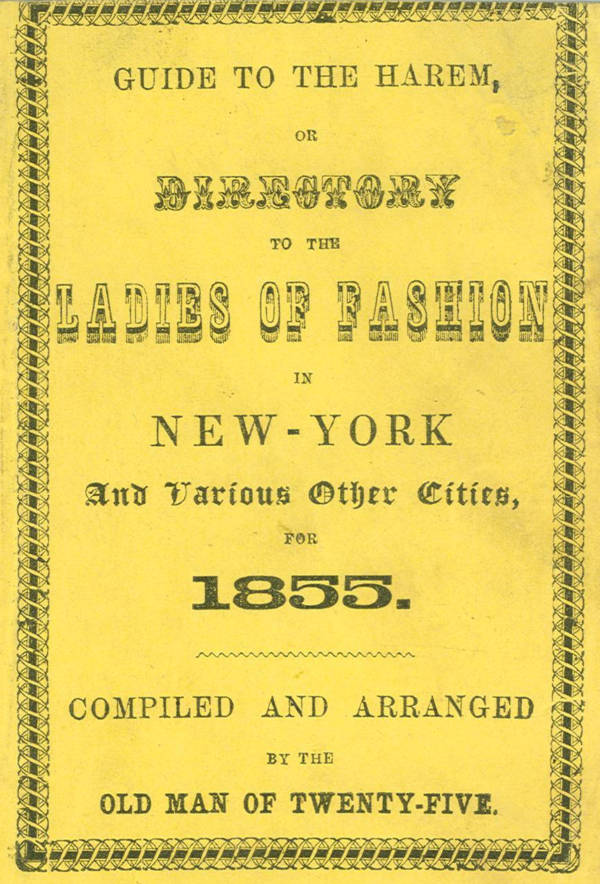 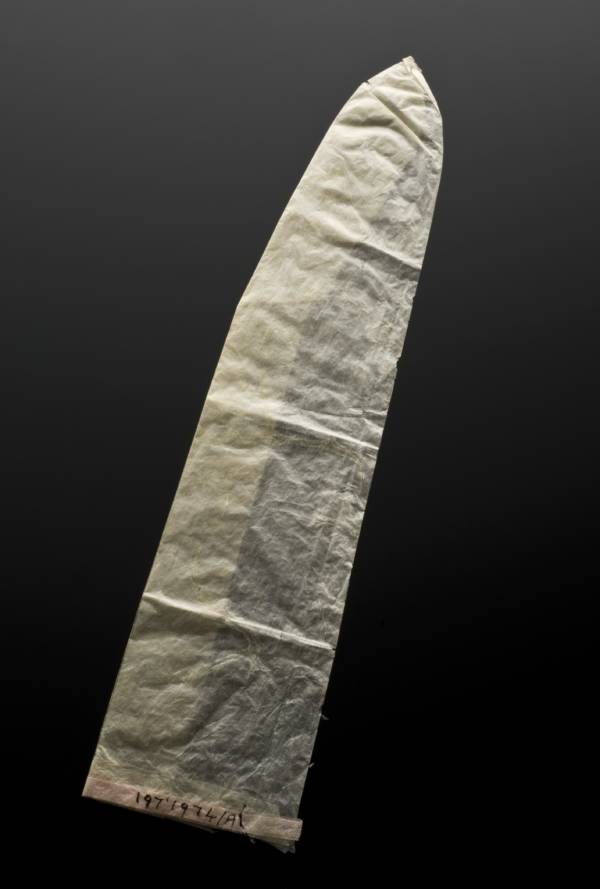 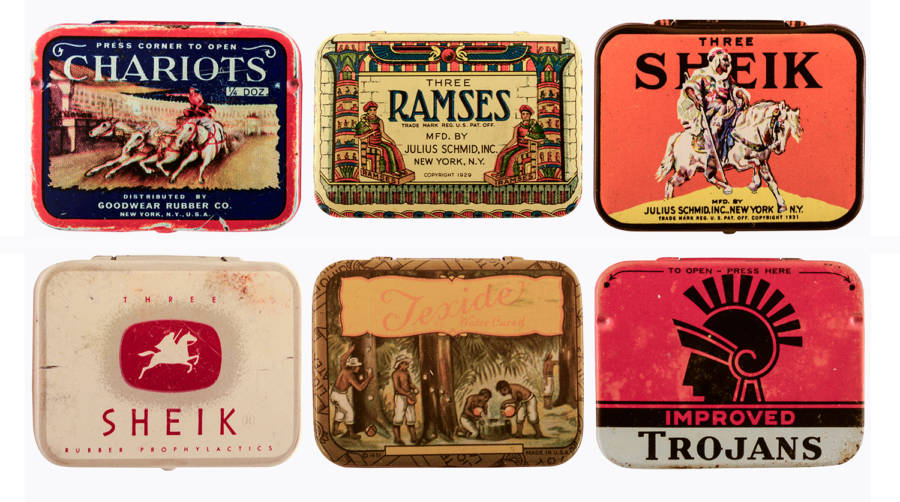 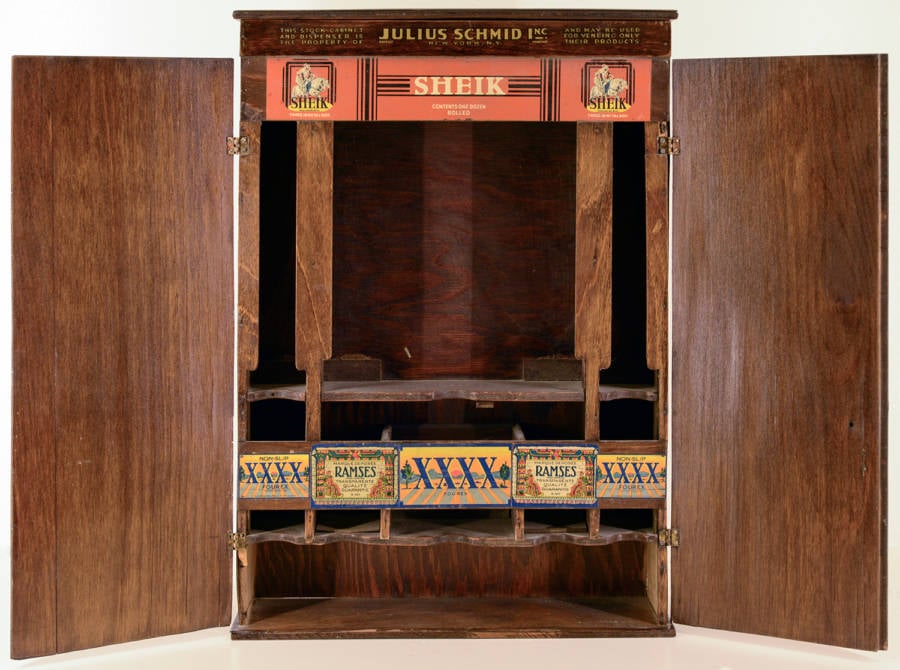 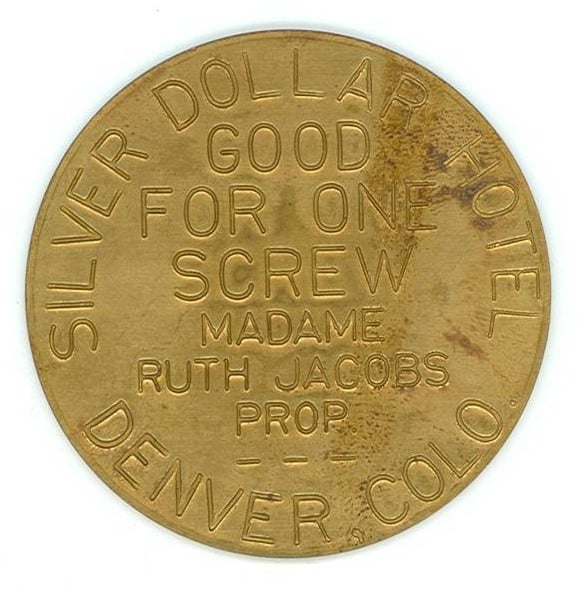 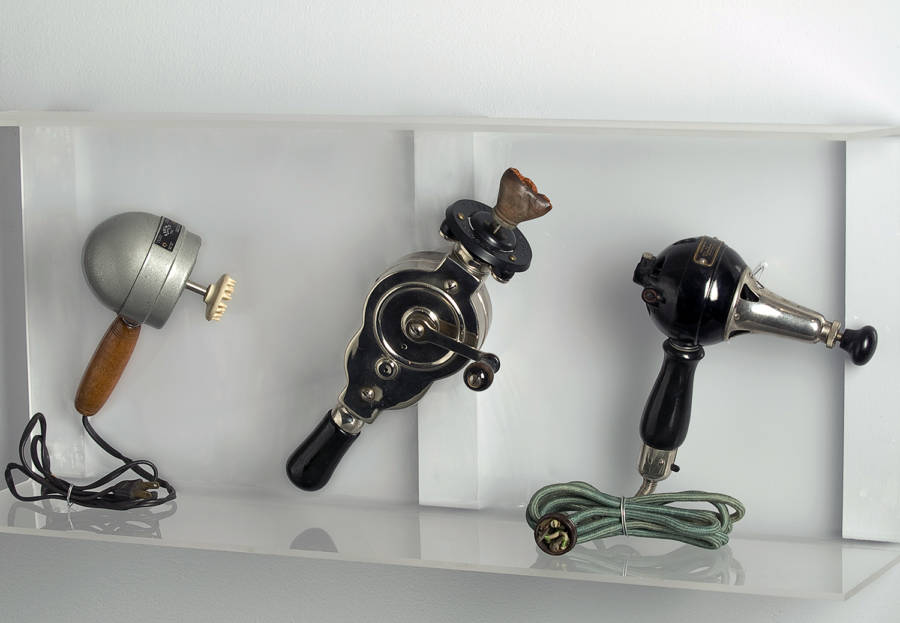 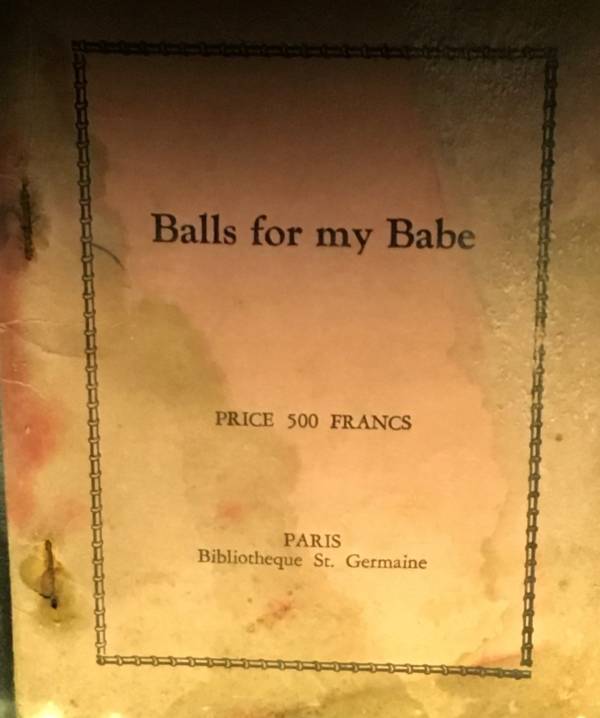 1 of 15
This homemade pamphlet from sometime after 1874 was titled "A Pretty Girl's Companion."

[This image has been cropped to omit explicit content.]Museum of Sex
2 of 15
This photo is one of the nearly 120 explicit items recently uncovered in a Brooklyn brownstone. The image is an example of pre-computer photo-shopping, in which the creator collaged multiple clippings together to create it.Museum of Sex
3 of 15
This business card is from the Broadway Business Hotel.

When the hotel was demolished in 1993, approximately 160 pornographic film reals from the 1950's through 1960's were uncovered.

One canister contained five reels of homosexual footage. Museum of Sex
4 of 15
Handy brothel guides provided both the address and a helpful review of every establishment where someone could purchase sex in the city.

"Gentlemen should be cautious about visiting here, for the landlady 'puts on awful airs,'" warns this 1855 guide from New York.
5 of 15
The American military distributed kits containing ointment, a soapy cloth, cleaning tissues and directions to soldiers during World War II in order to prevent venereal disease.Museum of Sex
6 of 15
Some condoms used to be made from sheep intestines that had been soaked in water and an alkaline solution, scraped free of mucous and exposed to burning sulfur. Science Museum London/Wikimedia Commons
7 of 15
Condoms used to be sold in decorative tins like these. Museum of Sex
8 of 15
In the 1930's, store clerks used condom cases with "privacy doors" to "protect the modesty" of female shoppers and children.Museum of Sex
9 of 15
In order to avoid technically exchanging money for sex, people would purchase brothel coins to pay for sexual acts. Museum of Sex
10 of 15
Tokens were also used to prevent the sex workers from having direct access to the cash they were earning.Museum of Sex
11 of 15
"Originally a medical device, vibrators were initially developed to aid physicians in the treatment of female hysteria."

Before their invention, doctors would induce orgasms manually by massaging their patients.

Sears catalogues first began selling vibrators in the early 1900's as "health and beauty aids."Museum of Sex
12 of 15
So-called Tijuana Bibles were small booklets filled with sexually explicit cartoons that often featured references to popular culture.Museum of Sex
13 of 15
Graphic engravings from the 17th century were sold as luxury items. My grandma likes to tell me that things were different -- better -- back in her day.

But after a trip to New York's Museum of Sex I learned that grandma couldn't be more wrong. At least on that last point.

Featuring provocative frescoes, an aroused Donald Duck, creatively-used broomsticks, and an array of artfully rendered genitalia, the museum's new exhibit, "Hardcore: A Century and a Half of Obscene Imagery," is so revealing that even young visitors (who have had access to the darkest depths of the internet for most of their lives) could be heard saying "woah."

"People's reactions to pornography -- it's very visceral, it's very immediate and it's either for or against," Sigel, a professor at Depaul University, said. "They immediately think it is changing in substantive ways -- either for better or for worse -- but they have no past to base that on."

And it's that kind of emotion-based judgement, Sigel would argue, that makes our society vulnerable to unnecessary and potentially dangerous panic.

In fact, these attempts to intervene can currently be seen in legislation across the country.

Would these Congressmen feel so threatened by the industry if they saw naughty frescoes, vases, and lamps from ancient Pompeii? Or the explicit engravings sold in high-end luxury stores in the early 1700s?

Would they blame the internet for this "crisis" after looking at brothel guides from the 1830s directing affluent gentlemen in the right direction for "beautiful harems?" What if they read an antique book from Paris titled "Balls for my Babe?"

Can something be a "crisis" if it's been happening forever?

The fact is that humans have always used whatever medium they had available to them to create pornography.

Same goes for stereoscopes in the 1850s, cartoon flip-books featuring beloved Disney characters, and 1930s selfies where people could trigger a tripod-perched camera by pulling a thick white cord.

In 1873, postal inspector Anthony Comstock created the New York Society for the Suppression of Vice and convinced the U.S. Congress to pass the Comstock Law - banning the delivery of "obscene, lewd, or lascivious" material.

Explicit films, or "stags," were also outlawed at one point, after originally surfacing around 1907. Those ten to twelve-minute movies were often shown in secret clubs and fraternities -- sometimes even by the police who had confiscated them.

It's true that some of the featured items at the Museum of Sex's exhibit seem extreme (like the sex guide from 1874 that instructs men on how to best flash women in the streets).

Looking at the particularly shocking images, visitors might wonder why it's important to learn about the "hardcore" stuff at all, rather than focusing on history's more mainstream forms of sexual expression.

"If it's so fringe, then Comstock wouldn't need to burn pornography by the tonnage," Sigel argued. "And even if it is fringe in some ways -- which I'm not sure it is -- it still affects our broader culture in ways we need to recognize."

Look at any contentious topic today -- immigration, abortions, race relations, etc. -- and you'll likely be surprised that things have always been a bit different than our grandparents care to know or remember.