Chester Nimitz joined the U.S. Navy as a last resort but would go on to become one of its greatest admirals after pioneering a new form of naval warfare that won the battle for the Pacific. 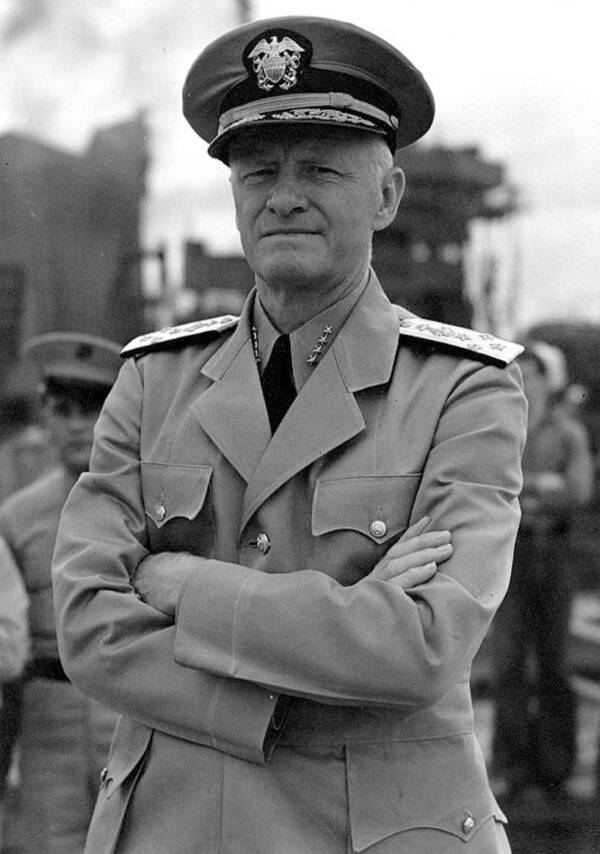 Admiral Chester Nimitz was not the most senior officer in the U.S. Navy during the Second World War, but he was arguably the most important.

Beginning in 1941, just after the Japanese attack on Pearl Harbor, his vision and drive in the Pacific Theater led to victory over Japan. As commander in chief of the Pacific Fleet and a Navy fleet admiral, Chester Nimitz pioneered a new way of naval warfare that squeezed Japanese ships into a smaller and smaller region.

And when Japan surrendered in 1945, Fleet Admiral Nimitz stood on the deck of the U.S.S. Missouri and signed the treaty that officially ended World War II.

Why Chester Nimitz Joined The Navy 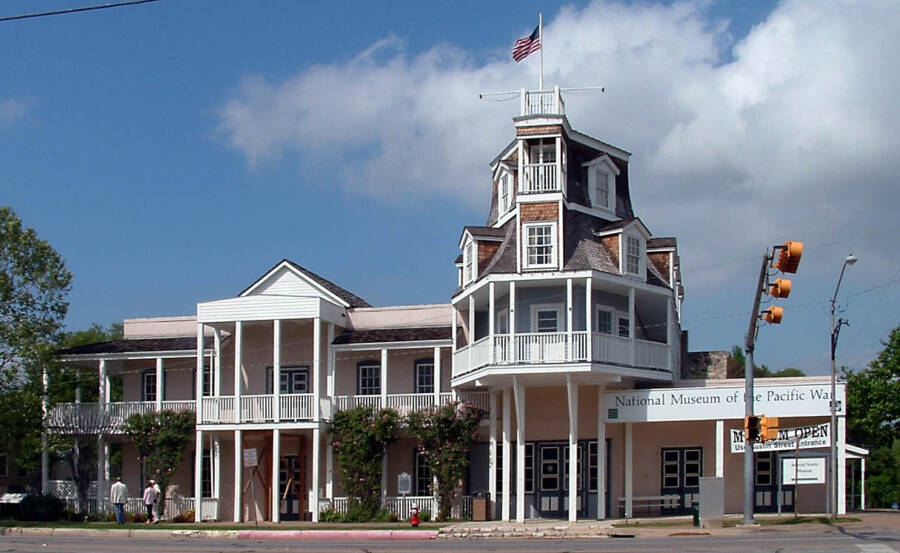 The National Museum of the Pacific War was the site of the Nimitz Hotel.

Chester William Nimitz was born on February 24, 1885, in Fredericksburg, Texas, where his grandfather ran a hotel fashioned with a ship’s superstructure, according to the Texas State Historical Association. His father, Chester Bernhard Nimitz, died of a rheumatic heart condition some five months before he was born.

Chester Nimitz was raised by his mother, Anna, and looked to his paternal grandfather, Charles Henry Nimitz — a German immigrant of old aristocratic blood who had become a merchant sea captain — as a father figure. Meanwhile, Anna remarried when Chester was five to her late husband’s brother.

Although Nimitz did not have a strong interest in the Naval Academy, he decided to take the exams anyway. According to E.B. Potter’s biography Nimitz, after rigorous study and tutoring by sympathetic friends and townsfolk, he passed and entered the Academy at age 16.

According to naval historian Ian Toll, “He was always popular with his classmates, and emerged as a natural leader.”

Nimitz graduated seventh in his class of 144 in 1905. His entry in the academy yearbook, the Lucky Bag, described vis-a-vis a line from William Wordsworth: “A man he seems of cheerful yesterdays and confident tomorrows.” 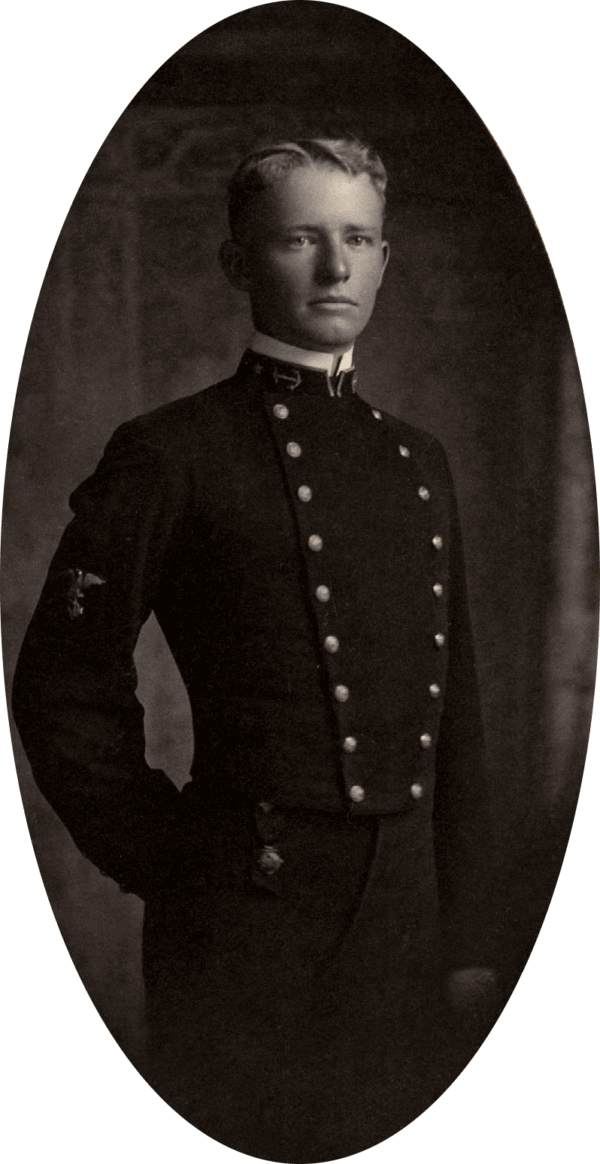 Wikimedia CommonsChester Nimitz as a cadet, 1905.

Chester Nimitz was commissioned as an ensign after two years of sea duty in the Far East. His professional career had a rocky start. “I got frightfully seasick, and must confess to some chilling of enthusiasm for the sea,” he would later recall, according to The New York Times. But Nimitz early on showed a certain calmness in the face of disaster.

In one memorable episode on the U.S.S. Decatur, the ship was caught in a storm, and the engineer telephoned Nimitz to inform him that the ship was sinking. Nimitz replied, “Just look on page 84 of Barton’s Engineering Manual. It will tell you what to do.” The ship was saved.

But there was to be a black mark on his career when he grounded the Decatur in the Philippines. He was court-martialed and reprimanded for neglect of duty.

Still, the optimistic Nimitz carried on. He went into the nascent submarine service, which was often a fast track for command for budding officers. He commanded U.S.S. Snapper, U.S.S. Narwal, and U.S.S. Skipjack.

In 1912, he received a Silver Lifesaving Medal for rescuing W.J. Walsh, a second-class fireman, from drowning. The following year he courted and wed Catherine Vance Freeman. They would have four children together. 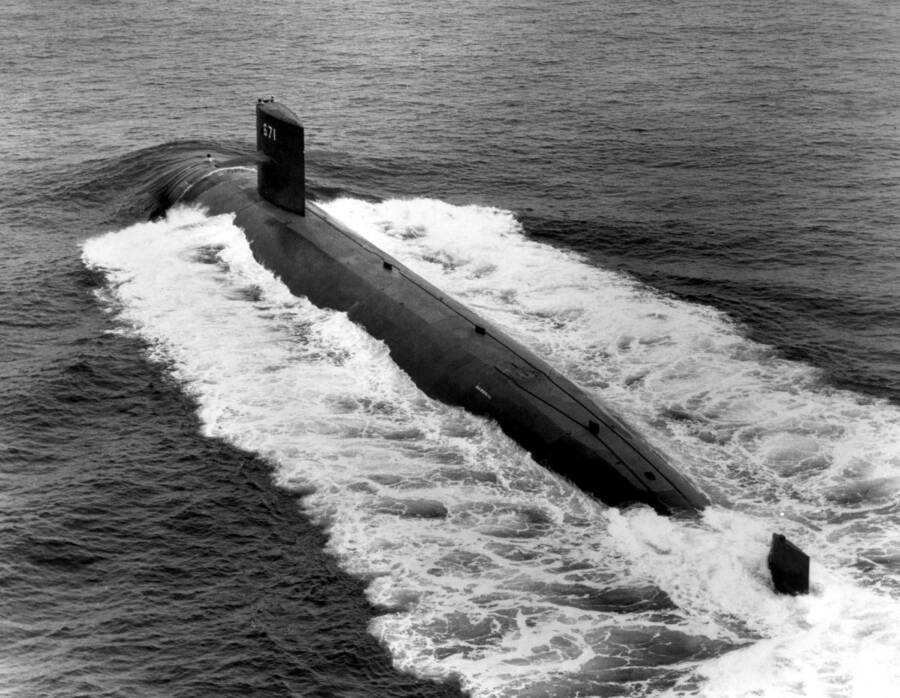 During the First World War, Chester Nimitz moved into the office of the Chief of Naval Operations and then became the executive officer of the battleship South Carolina.

He also attended the Naval War College where he studied War Plan Orange, a theoretical strategy in the event of a war with Japan.

This plan, which did not anticipate the technological changes that allowed for air and submarine power, nevertheless formed the basis of Nimitz’s strategy for World War II.

He later recounted, “I was asked once how we were able to fight the war in the Pacific, and I said that we fought it just as we had fought it all on paper in the Naval War College. I fought the whole war of the Pacific when I was there in 1923,” according to Ian W. Toll’s history of the Pacific Theater Pacific Crucible. 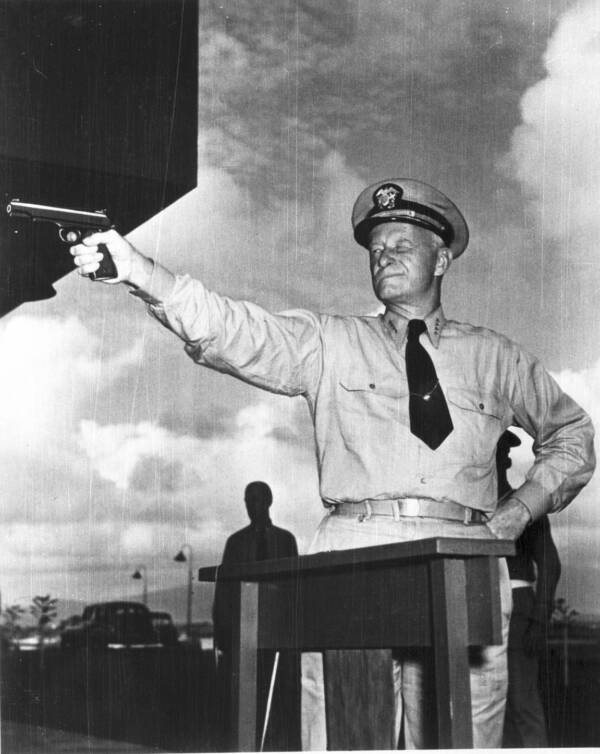 His next notable stint was at the University of California, where he established the first Naval Reserve Officers’ training unit. He headed the unit from 1926 to 1929.

Chester Nimitz certainly had a sense of prescience, at least according to his biographer E.B. Potter, who recorded that in the mid-1930s, in response to Nimitz’s son’s question about his father’s career track, Nimitz said:

“I do believe we are going to have a major war, with Japan and Germany, and that the war is going to start by a very serious surprise attack and defeat of U.S. armed forces, and that there is going to be a major revulsion on the part of the political power in Washington against all those in command at sea, and they’re all going to be thrown out, though it won’t be their fault necessarily. And I wish to be in a position of sufficient prominence so that I will then be considered as one to be sent to sea.”

How Chester Nimitz Became Commander In Chief Of The Pacific Fleet

By December 7, 1941, Chester Nimitz was a Rear Admiral and the Chief of the Bureau of Navigation.

After the attack on Pearl Harbor and the chaos of the following days, President Franklin Roosevelt relieved Admiral Husband Kimmel as the Commander and Chief of the Pacific Fleet and selected Nimitz to replace him.

Roosevelt told the Secretary of War, “Tell Nimitz to get the hell out to Pearl and stay there till the war is won.” Nimitz was promoted to full admiral, skipping the rank of vice admiral. 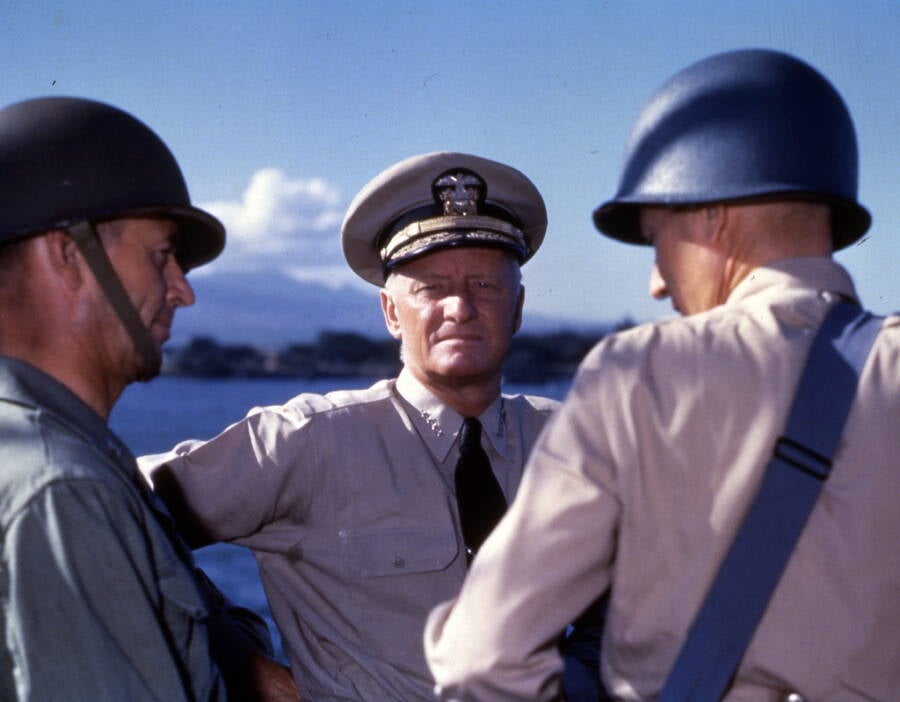 Admiral Nimitz inherited a crisis. The fleet was compromised, and the Japanese Empire was expanding rapidly throughout Asia and the Pacific.

American morale was at a nadir, and Admiral Nimitz took command at a sober ceremony on the submarine U.S.S. Grayling on December 31, 1941, for there were no battleships from which to transfer command.

He felt incredible pressure to turn the situation around. But his resources were limited not just because of the Pearl Harbor disaster but also by the Allied grand strategy of concentrating on Europe first. He was limited to attacking the Japanese periphery and small outposts.

The admiral worried, writing to his wife in March 1942, “I will be lucky to last six months. The public may demand action and results faster than I can produce,” according to Admiral Nimitz: The Commander of the Pacific Ocean Theater, by Brayton Harris.

Cultivating A Strong Team In The Pacific Theater 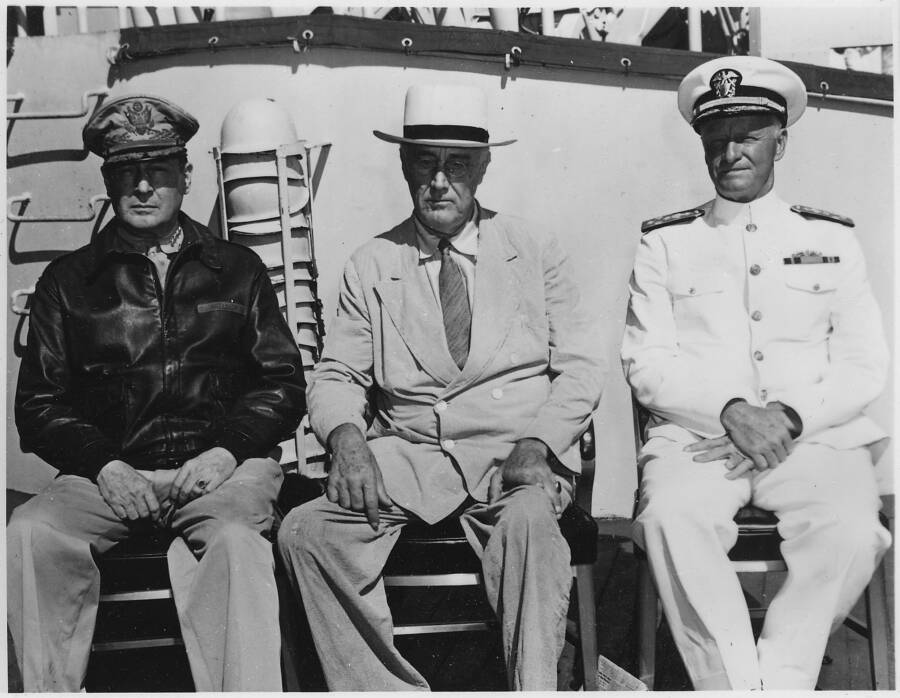 Admiral Chester Nimitz’s great strength lay in his ability to act as part of a team and cultivate strong relationships. After a rocky start with his irascible superior, Admiral Ernest King, Commander in Chief of the U.S. Fleet, the pair developed a relationship of respect — which was apparently very hard to do considering Admiral King’s reputation for arrogance.

Nimitz also cultivated a strong team of subordinates, such as Admirals Raymond A. Spruance and William F. “Bull” Halsey.

The warm and accommodating personality that made Nimitz so popular is best seen in an anecdote reported in The New York Times in which a sailor “dropped in” on his headquarters to chat. Apparently, the sailor had bet $20 to his shipmates that he could meet the admiral. Instead of kicking the enlisted man out, Nimitz sent for a Navy photographer to provide evidence of the meeting.

But Nimitz also invested in a strong intelligence team that early on broke important Japanese codes that proved decisive during this critical period of the war.

The Battle Of Midway

It was from intelligence that Admiral Chester Nimitz learned of Japanese movements that led to two critical battles. The first, the May 4 – 8, 1942, Battle of the Coral Sea, was a tactical win for the Japanese.

The U.S. Navy lost the carrier Lexington and suffered heavy damage on the carrier Yorktown, but the battle showed Nimitz the importance of air power since it was the first battle in history to be fought entirely in the air. Strategically, it blunted Imperial Japan’s advance in New Guinea. The second battle was the famous Battle of Midway from June 4 to 7, 1942.

The Battle of Midway was a result of Colonel Jimmy Doolittle’s raid on Japan using land bombers launched from the decks of the U.S.S. Hornet. While having a limited military impact, the raid incited the Japanese to attempt to expand their defensive perimeter by assailing the American base on the tiny atoll of Midway. 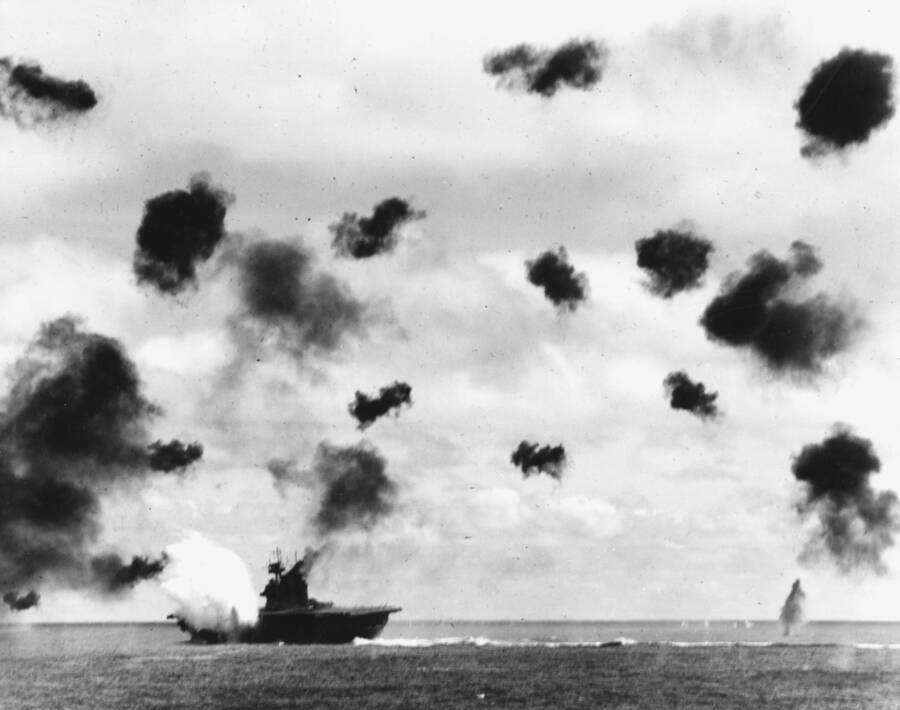 Nimitz may have yielded and withdrawn the fleet to husband his carrier strength, but he made the strategic decision to use the intelligence of the impending attack to create an ambush. The Japanese launched three battle fleets at Midway that included four fleet carriers, while Nimitz only had two that were fully functional, along with the Yorktown, which was still recovering.

The battle, much like the Battle of Coral Sea, was fought almost entirely by air and resulted in an overwhelming American victory. Imperial Japan’s offensive was permanently blunted, and its air power was essentially lost. While the war would continue for three more long years, Midway became known as the decisive turning point.

The massive campaign that followed saw the United States fully exercise all its industrial and military power. By the war’s end, Nimitz would command more men, aircraft, and ships than any other military leader in history. 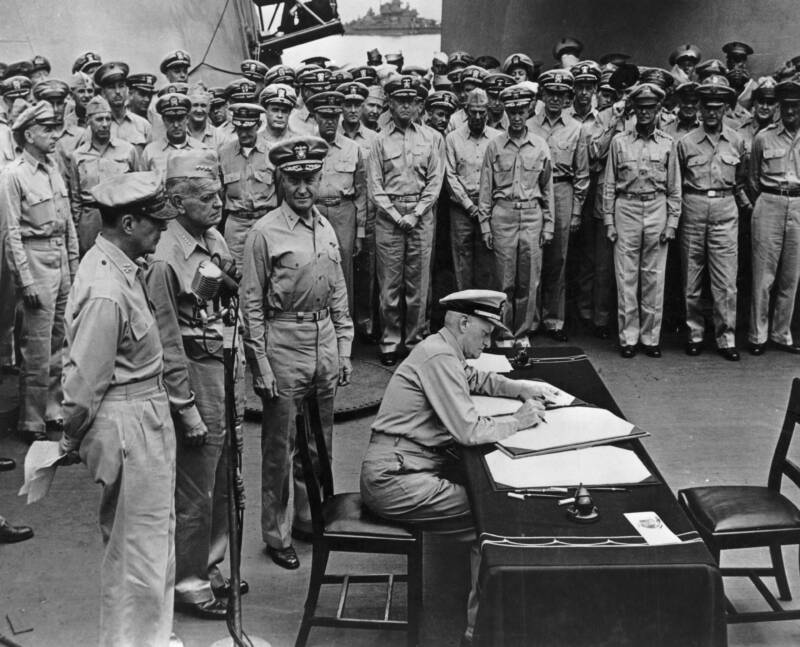 Bettmann/Getty ImagesFleet Admiral Chester W. Nimitz signs the documents of Japan’s surrender for the United States aboard the U.S.S. Missouri on Sept. 2, 1945.

At the formal Japanese surrender on September 2, 1945, on the U.S.S. Missouri in Tokyo Bay, Admiral Nimitz signed as a representative of the United States. By this time, he was a five-star Fleet Admiral, a rank created only the previous year by Congress. 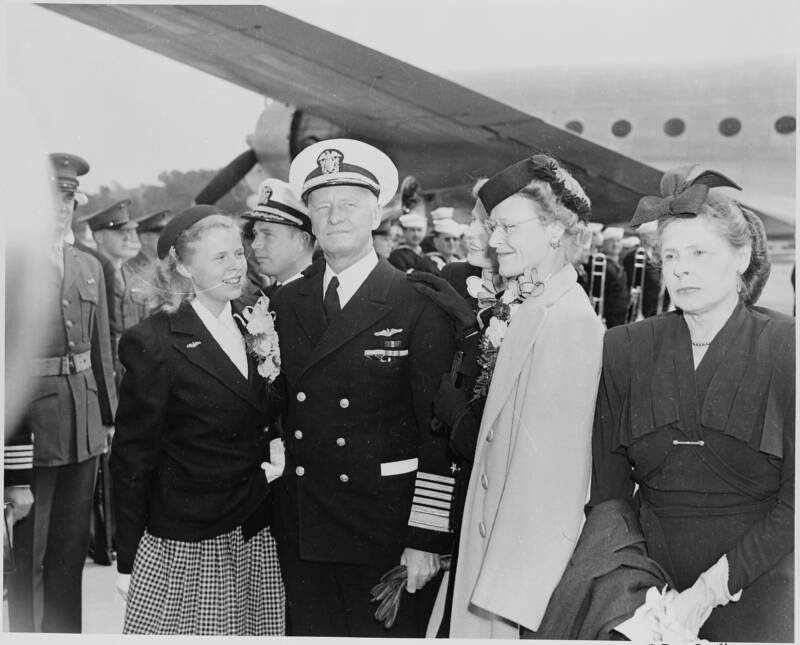 Wikimedia CommonsAdmiral Chester Nimitz and his Family at a celebration in Washington, D.C.

Chester Nimitz remained in the Navy immediately after the war, succeeding Admiral Ernest King as Chief of Naval Operations.

According to Life magazine, he oversaw the scale down of the massive U.S. Navy to peacetime footing as well as backing the use of nuclear power for the future fleet.

While he formally retired as the Chief of Naval Operations on December 15, 1947, as a fleet admiral, he was technically on active duty for the rest of his life and was given full pay.

He moved to Berkeley, California, and took up some ceremonial and active roles, such as being a Trustee for the University of California and a professor for the Naval Reserve. Unassuming to the end, he did not write memoirs and did not care for people to fuss over him.

Fleet Admiral Chester Nimitz died on February 20, 1966, at age 80. His boyhood home in Fredericksburg, Texas, is now incorporated into the National Museum of the Pacific War. His story, along with others from the most dramatic days of World War II, is told in the 2019 film Midway, with Woody Harrelson playing Chester Nimitz.

Now that you’ve read up on the incredible career of Admiral Chester Nimitz, you should check out the story of famous American daredevil aviator Jimmy Doolittle who led the raid against Tokyo in response to Pearl Harbor, or the story of the Battle of Midway, the critical turning point in the Pacific Theater of the Second World War.